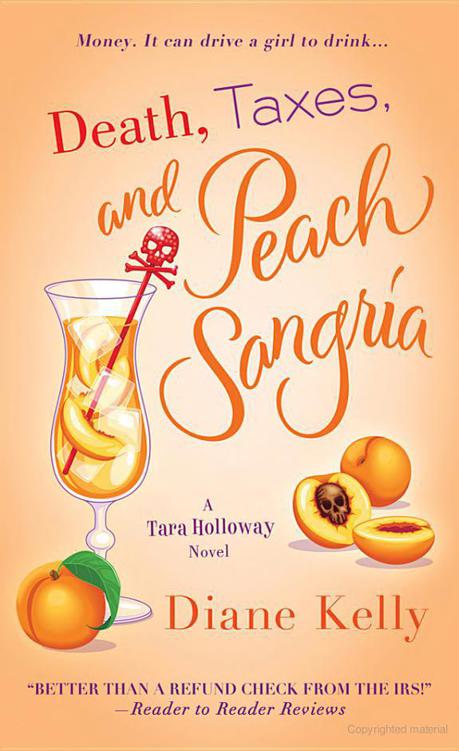 The author and publisher have provided this e-book to you for your personal use only.
You may not make this e-book publicly available in any way.
Copyright infringement is against the law. If you believe the copy of this e-book
you are reading infringes on the author’s copyright, please notify the publisher at:
us.macmillanusa.com/piracy
.

Big thanks to my wonderful team at St. Martin’s Paperbacks! To my editor, Holly Blanck,
for your insightful editorial comments. I’m lucky to have such a nice “boss.” Thanks
to Eileen Rothschild and Aleksandra Mencel for building buzz about my books. Thanks
to Danielle Fiorella and Monika Roe for the fun and eye-catching covers. And to everyone
else at St. Martin’s who played a role in bringing my books to readers, thanks for
all you do!

Thanks to my agent, Helen Breitwieser, for your part in making this series a continuing
success. You’re smart, hardworking, and encouraging. I’m so glad to have you on my
team!

To Liz Bemis and Sienna Condy of Bemis Promotions, thanks for making my Web site and
newsletters rock!

Thanks to the wonderful members of my Street Team! I appreciate all you do in introducing
Tara and her cohorts to your friends and fellow readers.

To the IRS special agents, thanks for sharing your fascinating world with me and for
all you do on behalf of honest taxpayers. Please forgive Tara for being such a naughty
agent and breaking the rules. I tried to make her behave like a special agent should,
but she refused to cooperate. Shame on her!

Finally, thanks to my readers! I hope you’ll enjoy your time with Tara and the gang
and that this book will bring you lots of laughs.

Place fruit in a pitcher. Add wine, schnapps, and lemonade concentrate. Stir well.
Refrigerate at least one hour. Add soda just before serving and stir again. Serve
over ice, enjoy with friends, and forget your troubles!

On a Monday morning in late September, Eddie Bardin and I donned our ballistic vests,
slid our Glocks into our ankle holsters, and headed out of downtown Dallas in a plain
white government-issue sedan that smelled faintly of French fries.

Eddie leaned toward the door and checked himself in the side mirror. “How do I look?”

What my response lacked in decorum it made up for in sincerity. “Like an idiot.”

“Then it’s the perfect disguise.”

With the shiny gold chains, sagging jeans that exposed polka-dot boxers, and untied
high-top basketball shoes, he looked like a hip-hop singer or a wannabe gangster.
The disguise was a far cry from Eddie’s usual attire of classic business suits and
silk ties. I, too, wore a disguise, though mine was far more subtle. In blue jeans,
sneakers, and a Dallas Mavericks T-shirt, I was undercover as a retail sales associate
from a sporting goods store at a nearby mall. As a final touch, I’d pulled my chestnut-brown
hair into a ponytail and topped it with a Texas Rangers baseball cap. Go, team!

We were two IRS special agents on a mission. Today’s mission would be taking down
a tax preparer who called herself the Deduction Diva. According to her glittery red
advertising flyer, she provided clients with massage chairs and a complimentary glass
of champagne while their returns were prepared. Hoity-toity, huh?

With tax law growing increasingly complex, more people were turning to professional
preparers. Entrepreneurs looking for a niche figured they’d cash in on the trend.
Unfortunately, too many had jumped on the bandwagon. Tax preparation services had
become a crowded market and preparers had resorted to gimmicks to grab the attention
of potential clients. But where these people came up with the gimmicks God only knows.

After merging onto the freeway, I glanced over at my partner. “Don’t you dare touch
that stereo.”

I slapped his hand away as he attempted to eject my Tim McGraw CD and slip in some
soft jazz. Eddie might be African-American, but he was much more Kenny G than P. Diddy.
I, on the other hand, was much more Lady Antebellum than Lady Gaga.

Yep, in many ways Eddie and I were polar opposites. He was tall and dark, a father
of two, who’d grown up and was now raising his family in the affluent North Dallas
suburbs. I was a petite white woman, a recovering tomboy who’d grown up climbing trees,
shooting BB guns, and swimming in the muddy creeks of the East Texas piney woods.

Dig a little deeper, though, and you’d find Eddie and I shared quite a few similarities.
We’d both kicked academic ass in college, graduating at the top of our classes. We’d
both taken jobs as special agents in IRS Criminal Investigations when we’d discovered
that sitting at a desk all day didn’t suit us. And we both wanted to see tax cheats
get their due. Especially the Deduction Diva. She’d been cheating the government for
years. The Diva’s due was long
overdue.

Twenty minutes later, I pulled the car into the lot of the suburban office park where
the Diva’s business was located and took a spot in the second row.

“Break a leg,” I said. Given that my partner was in costume, the sentiment seemed
appropriate.

Eddie opened the door and climbed out, a phony W-2 clutched in his hand. I sat in
the car, snickering as he shuffled across the parking lot in his saggy jeans and entered
the glass-front office space.

The audit department had referred the Diva’s case to Criminal Investigations after
examinations of several of her clients revealed a disturbing pattern. Each of their
returns showed a significant loss on a vague “consulting” business. Suspiciously,
the loss in each case was just enough to offset the client’s other income, resulting
in a refund of all taxes the client had paid in. When questioned by auditors, the
clients pointed fingers at their tax preparer, claiming the Deduction Diva had devised
the fraudulent scheme.

Though the Diva’s clients were hardly innocent, as long as they made good on the taxes
owed we’d let them slide with a stern warning. Criminal Investigations was more interested
in nailing the preparer who’d perpetrated the fraud on a wide-scale basis. Besides,
we’d need the clients to testify against the Diva should she plead
not guilty.
But just in case our potential witnesses decided to assert their Fifth Amendment
right to remain silent, we were here to collect direct evidence of the Diva’s fraud.

Catching tax cheats red-handed was always a hoot. There’s nothing quite as satisfying
as seeing that
oh-shit-they-got-me!
look in their eyes.

The Deduction Diva wasn’t the only abusive preparer in the Dallas area. There were
dozens on the IRS radar and hundreds more across the country. Abuse had become so
prevalent, in fact, that the agency had enacted a number of measures to crack down
on preparer fraud, including background checks and competency testing. Whether these
new regulations would reduce fraud remained to be seen.

Our boss, Lu “the Lobo” Lobozinski, had decided that the most efficient way to deal
with these cheats was to perform an intense, concentrated sweep. She’d paired up the
special agents in the office and handed each team a list of preparers to investigate
and arrest. Eddie and I were halfway through our list. We’d already taken down several
abusive preparers, including a moron who called himself the Weapon of Mass Deductions
and advertised on television, wearing combat fatigues and army boots in his cheesy
commercial.

With the October 15th extension deadline rapidly approaching, the summer lull was
over. Tax preparers were busy with clients who’d requested more time to file their
returns, some because their finances were extensive and complicated, others because
they couldn’t get their act together by the April deadline. I suspected most of the
Diva’s clients were of the latter variety.

While the Deduction Diva prepared my partner’s tax return, I sat in the car playing
Scrabble on my cell phone and tried not to think of the major case Eddie and I had
pending. We’d dealt with some pretty nasty people in our investigations, but these
guys were by far the nastiest we’d faced. They were heartless, cruel, and extremely
violent, killing hundreds, perhaps thousands, in their attacks, with no thought to
the lives they’d ruined, to the innocents maimed and killed as collateral damage.

A half hour later, I’d just earned a triple score with the word “FUNGUS” when Eddie
emerged from the Diva’s office, walked around the corner of the building, and sent
me a text.

The Diva had done it again. Eddie’d gone into her office with a decoy W-2 showing
thirty-five thousand in earnings from a purported job as a DJ at a local nightclub.
Given the amount of tax withholding on the W-2, Eddie should have owed $38.76 in additional
tax had the Diva properly prepared his return.

I tugged on the hem of my jeans to make sure my ankle holster wasn’t exposed, slid
my phone into my purse, and headed inside with my false W-2. Mine showed I’d earned
twenty-eight grand, with just enough withholding to cover my income taxes. If the
Diva prepared my return correctly, I’d be due a whopping fourteen-cent refund.

I pushed open the glass door and stepped inside.

The office looked like a brothel. The walls were painted a deep scarlet. The cushy
black velvet massage chairs featured red satin pillows. A pole lamp with a red fringed
shade stood between the chairs. Over the gray industrial carpet lay a large fluffy
red rug. Barry White’s deep voice crooned softly from a stereo in the corner.

One Minute to Midnight by Amy Silver
Till Death Do Us Purl by Anne Canadeo
The Cross of Mithras Vol. 1: EOD Operation Welcome to Hell by Douglas Howell
Hex by Allen Steele
At Close Range by Marilyn Tracy
The Pussy Trap by Capri, Ne Ne
Fog of War (Justin Hall # 3) by Ethan Jones
Revelation of Blood by J. L. McCoy
Jack and Joe: Hunt for Jack Reacher Series (The Hunt for Jack Reacher Series Book 6) by Diane Capri
Anarchy and Old Dogs (Dr. Siri Paiboun) by Colin Cotterill