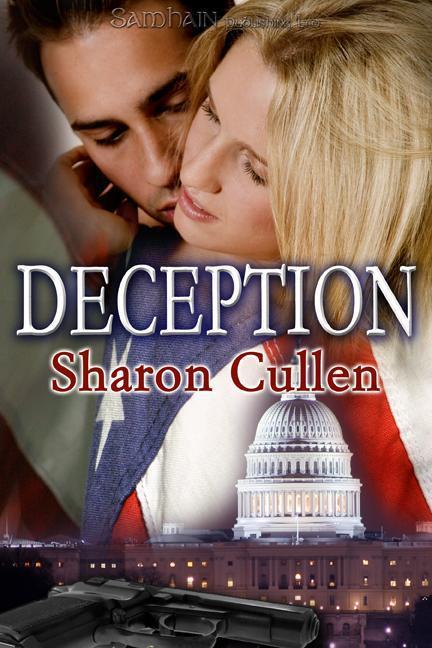 A killer’s obsession could destroy their second chance for love.

A
Love on the Edge
romance.

Only a year ago, Officer Alex Juran and his wife Tess had it all. Love, a solid marriage and a baby on the way. Then in one heartbeat they lost everything.

Now, Tess is doing her best to move on. She has a thriving business and while she may be lonely at times, she’s proud of the new life she’s built without Alex.

Two days before their divorce is final, Alex is shot in the line of duty and left for dead. He faces a difficult recovery so Tess finds herself postponing the divorce and offering to care for him until he can live alone again.

At first, cohabitation is little more than combat. Alex’s incapacitating injuries, the looming divorce, and his inability to remember who shot him have him lashing out at the nearest target: Tess. When someone begins stalking her, he suspects his shooter has returned. Convinced that Tess is in danger, Alex becomes desperate to recover his strength.

Because no matter how much she’s hurt him in the past, they’ve been given a second chance—and he’ll do anything to protect his wife.

Warning: This book does not come with a box of Kleenex, so please grab one before you start reading. Contains two people struggling to learn to love again along with graphic sex, explicit violence and realistic language. And some very hot cops.

eBooks are
not
transferable.

They cannot be sold, shared or given away as it is an infringement on the copyright of this work.

To the spouses of police officers everywhere, this book is for you. For all the nights you’ve waited up worrying. For all the holidays you’ve had to celebrate by yourself. For the home fires you’ve kept burning. For your support and dedication to the men and women who keep us safe, God bless you.

And for John. For fighting the good fight. For serving and protecting. I love you.

Alex Juran’s breath condensed on the cold night air. He adjusted the brim of his John Deere cap and tucked his chin into his thin coat, straining to hear past the sounds of traffic a few blocks away and the mournful horn of a barge chugging down the river.

The scrape of a boot against the ice-encrusted blacktop had him twisting around in time to see a shadow emerge from between the two warehouses. Alex released some of the tension in his shoulders when Jason sauntered forward, all teenage bravado and rich-boy entitlement.

“You got the stuff?” Alex asked.

“You got the money?” Jason’s eyes darted around.

Alex reached for the wad of cash in his back pocket just as another shape materialized beside Jason. Fingers on the cash, Alex paused, his heart damn near pounding out of his chest. His gaze jumped between Jason and the newcomer.

“Why?” came the disembodied question.

Alex slowly withdrew his hand from his back pocket. “I have an old lady with expensive tastes,” he said on a shrug. “Need the extra cash.”

The guy chuckled and walked into the light. Immediately Alex knew why he’d recognized the voice and he sucked in a cold breath of shock.

“Take your hat off.” Roger Sheffield—his brother-in-law—stepped forward and knocked the cap off Alex’s head. “Fuck,” he muttered.

For half a second, a freakin’ half a second, Alex pulled his gaze from Roger’s hands to look into his eyes. Before he could take another cold breath, Roger was pointing a Beretta at him.

“You brought me a cop, Jason? A
cop
?” Roger said over his shoulder.

Sirens broke through the thick silence. Roger’s eyes darted like a cornered animal. His lips curled, and Alex knew with gut-clenching certainty he was staring at death.

He lunged for the gun but Roger twisted, sliding out of Alex’s hold. The sound of a gunshot echoed and bounced off the metal sides of the surrounding warehouses. The bullet slammed into Alex’s Kevlar vest, forcing him backward and knocking the breath out of him. He rolled to avoid the second shot but searing pain ripped through his knee. Two more shots exploded and Jason cried out.

The world faded to gray. His body convulsed in pain.
Jason.
Where the hell was Jason? He raised his head and searched the shadows and slush. Jason lay two feet from him, his glassy eyes staring at nothing.

With a groan, Alex’s head fell to the pavement. He stared up at stars that pulsed and glimmered as soft snow began to fall.

So this was how it was gonna end, huh? Lying on the wet ground between two dirty warehouses?

Tess’s face wavered in front of him and he tried to reach for her, wanting to feel her skin against his fingertips one last time.

His partner’s face suddenly appeared. “Hang in there, AJ. Help’s comin’.” Tony pressed his hand to Alex’s shattered knee. Alex to rolled to his side and bit his lip to keep from crying out. His vision dimmed and he fought to stay conscious.

“Shef…” Alex choked on his own spit and coughed.

“Where’s the ambulance?” Tony bellowed behind him.

All around them, officers yelled and cursed. Pulsing red lights lit the sides of the warehouses. The wail of sirens abruptly stopped.

He fought the black waves lapping at his conscience.

Tess lunged off the bed and raced through the dark house. Her black lab, Othello, ran beside her, his nails clicking in time to her pulse. Grabbing the edge of the kitchen doorframe with one hand, Tess slapped at the light switch with the other. Canister lights flared, illuminating the kitchen and ten layers of Saran-wrapped wedding cake in various stages of decoration.

She collapsed against the wall, her body shaking in silent laughter. Such a stupid dream, but it had seemed so
real
.

The bride had been ready to throw the bouquet. The clutch of white flowers went sailing through the air, and who should jump out of the crowd but Alex, his arm outstretched, reaching for the flowers. Tess could only stare in mute horror as her soon-to-be ex-husband dove for the bouquet and landed in the cake.

She shook her head and turned off the light. Freud would have a heyday with the symbolism of
that
dream.

“Come on, O. Back to bed.” She headed for her bedroom, glancing through the living room at the illuminated clock on her cable box. Only two more hours of sleep before she had to start on the pies. Then she had to whip up several batches of cookies for a diner and complete Debra’s cake. A hectic day, but she loved every minute she spent creating and designing desserts for Tess’s Temptations.

She crawled under the still warm covers and curled into a ball with Othello at her back, pushing away the loneliness that haunted her in the lonely hours of the early morning. She didn’t know why she missed Alex the most at this time of the day. It wasn’t like he was ever here when they were married. She’d slept alone just as much then as she did now.

Just as she began to drift into sleep, Othello growled. The sound of the doorbell pealed through the silent house and the dog bounded off the bed like a shot, running into the living room and barking loud enough to wake the dead.

With shaking hands, Tess pushed the heavy covers off. The doorbell rang again. She padded quietly down the hall and walked a wide path around the front door to press her back to the wall next to the window. Pushing the heavy drapes aside, she peered into the cold December night at a blue-and-white police cruiser parked behind her white catering van.

She covered her mouth with a fist and took a step back.

If something happens to me, the chief won’t call. He’ll tell you in person
, Alex had always said
.

She took another step from the window and then another, her heart beating unevenly, the blood in her veins moving at warp speed.

The chief wouldn’t be here. She and Alex were no longer living together. Sure, they were still married, but only for a few more days. Surely, he wasn’t here to—

The doorbell rang a third time and Othello barked so hard his front paws came off the ground.

Oh, God.
She swiped at her tears with trembling hands and took a few short steps to the door to turn the deadbolt.

Tony pushed his way in before she could get the door open and Chief Foster stepped forward, his white hair sticking up, his face still bearing the wrinkles of his sheets. “Mrs. Juran—”

“No.” Tess shook her head and glanced blindly at Tony.

“Mrs. Juran, I’m sorry to inform you that at twenty-three hundred hours this evening Officer Juran was shot in the line of duty.”

“No,” she whispered. She looked into Tony’s eyes—brown eyes that usually bore laughter but now held only grief.

Her knees gave way and Tony grabbed for her.

Not Alex. Please, God, anything but that.

The lights of the hospital parking lot illuminated the snowflakes drifting down to earth as people scurried about, dodging the half-frozen puddles.

Through the reflection of the glass Tess could see the officers behind her, crowded into the waiting room. The chief stood to one side conferring with the sergeants and lieutenants. On her other side Tony sat in a chair, his bald, dark-skinned head cradled in his hands.

She rolled her forehead against the cold glass and closed her eyes.

All the way to the hospital the cruiser’s siren had wailed a passage through the sparse traffic and Tess had prayed she’d make it in time to see Alex. To tell him… She didn’t know what she wanted to tell him. They hadn’t spoken in months, and she’d had this need to see him and speak to him. But when they arrived, Alex had already been taken into surgery and she hadn’t been given that chance.

She pushed away from the window and wove through the officers, unable to look anyone in the eye, afraid she’d fall apart if she did. She sank into the chair next to Tony.

He opened one eye and looked at her. “Doin’ okay?”

She nodded, shook her head, then nodded again.

She bent forward, tunneling her fingers through her hair. “Tell me what happened.”

“Alex was meeting his contact in a drug ring he’d been trying to infiltrate.” Tony drew his legs back and sat up.

“It got all fucked up. We heard shots.”

She struggled to breathe, feeling as if a hand was squeezing the air out of her lungs. “Why, Tony? Why narcotics? He said he’d never leave patrol.”

Tony shrugged. “He wasn’t himself after… He wanted a change. Something different.”

Bamboo and Blood by James Church
Brontës by Juliet Barker
I Can't Help That I'm A Slut by Logan Lee
Anita Mills by The Rogue's Return
The Infinite Sea by Rick Yancey
Rex Aftermath (Elei's Chronicles) by Thoma, Chrystalla
A Step Away from Paradise: A Tibetan Lama's Extraordinary Journey to a Land of Immortality by Thomas Shor
The Wedding Soup Murder: An Italian Kitchen Mystery by Rosie Genova
Delicious by Unknown
The Deceit by Tom Knox