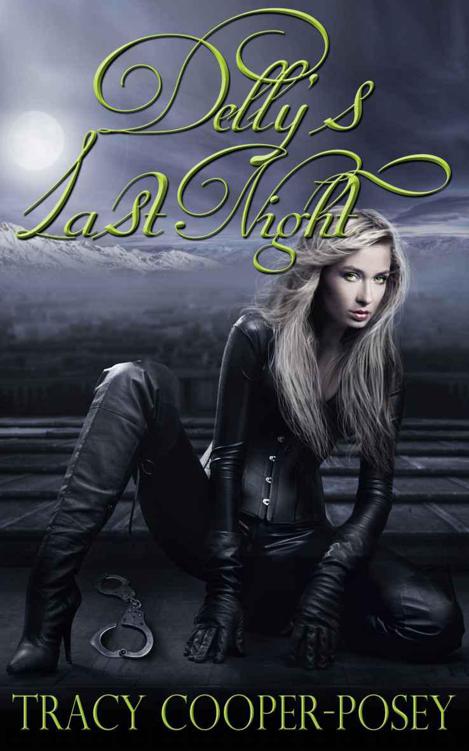 This will be the last night in the life of Delly Alexander.

A talented cat thief, Delly cracks one safe too many.

The safe belongs to an old enemy, Neal Cadogan, who catches her red-handed and ties her up while he decides what to do with her.

Neal and Delly were once lovers but the rift that separates them is filled with bittnerness. Now with Delly at his mercy, Neal takes his revenge, which reverts to a night of heated sexual need seasoned by years of lies. It is a sensual power-play with each determined to outsmart the other.

But their warped passion is the key that unlocks the door on a decade-old conspiracy that will utterly change their lives.

Other books by Tracy Cooper-Posey

Eyes of a Stranger
, Contemporary Romance

Case of the Reluctant Agent
, A Sherlock Holmes Mystery

See
http://TracyCooperPosey.com
for details on each title.

A sole proprietorship owned and operated

This is an original publication of Tracy Cooper-Posey

This is a work of fiction. Names, characters, places and incidents either are the product of the author’s imagination or are used fictitiously, and any resemblance to actual persons, living or dead, business establishments, events, or locales, is entirely coincidental. The publisher does not have any control over and does not assume any responsibility for third-party websites or their content.

But How Can I Tell If You’re Lying?

I’ve featured professional thieves a few times now, but
Thief In the Night
, a very short story for Ellora’s Cave
,
was my first published effort that featured a cat burglar.

Half the attraction, for me, is that once a character is working on the wrong side of the law, where lying become commonplace, then how does a Romance stand any sort of chance of flourishing, if a potential lover can’t trust that what the other person is saying is the truth?

It makes for delicious fiction, and I expanded heavily on that theme in
Blood Knot
, six years after
Thief In the Night
was released.

Blood Knot
was both a full length book and a paranormal Romance, which makes it quite a bit different from
Thief In The Night
, but the essential dilemma remained:

Truth is one of the first casualties among thieves, not honour, so how does one fall in love?

Not bad for a story just over forty pages long.

But a few reviews remarked that they would have liked to have seen more about the characters, or just more story, period.

As I wrote
Thief In The Night
right up to and nudging the upper limit of Ellora’s Cave’s boundaries for short stories at the time, I couldn’t make it any longer than it already was.

But
Thief In The Night
went out of print in 2010, and now I’ve been able to expand the story, to include back story on how Delly and Neal met, ten years ago.

The story has been extended by another whopping 33% or 20 pages.

It’s now novella length, and no longer a “quickie.”

I’ve renamed the story
Delly’s Last Night
, for that reason and because there are just too many stories with “Thief” in the title (try a search on Amazon!) .

Finally, too, I get a good cover to go with the story!

This is my Author’s Edition.

It wasn’t a butterfly landing in Beijing that tripped off the events that ended the life of Delly Alexander.

It was a cook preparing a banquet in Miami.

The harried cook put too much garlic in the sauce base, which caused Neal Cadogan to leave the awards ceremony abruptly and head for home two hours before he was even remotely expected.

His car blowing a tire on the coast road half a mile from his ocean cliff-side home was part of the same run of incredible bad luck for Delly, even though it didn’t look at all connected. The lads who had intended to rip the Porsche off had been interrupted by Cadogan’s early return to his car.

Pissed about losing the tidy profit they’d been counting on, they’d jammed the screwdriver they’d been using on the alarm under the hood into the rear radial instead. They were moving fast. They missed the soft side and hit the tread instead. It was steel belted, so the leak created was a slow one. Cadogan was nearly home before the rim hit the dirt.

He’d glanced at his watch, at the mournful pouch of the flat tire and up at the dark high arch of his living room windows that looked out over the pounding surf. His stomach made up his mind for him. He headed home on foot, sliding through the night like a shadow.

He moved through his dark, silent house, heading straight for the bathroom off his bedroom. There was an old bottle of Gravol there that would calm his stomach nicely. Then he could worry about the car.

Delly’s first introduction to the fatal chain of events happened then. When Cadogan threw the bedroom light switches and the room blazed with incandescent light, she had her right arm buried up to the elbow in the guts of the small wall safe hidden behind the picture that hung over the head of the bed.

At the first blinding flash of light, she acted instinctively; she dived off the bed, tucked herself up into a ball, and let herself roll across the wide expanse of gleaming floorboards. As she slowed, she sprang to her feet and leapt for the sliding door she had opened earlier for just this sort of an emergency.

She didn’t look to see who had walked in the room. Her face was covered, but the instinct was ingrained after so many years. She kept her face averted.

Truth of Fire by Abby Wood
The Astor Orphan by Alexandra Aldrich
Waybound by Cam Baity
Sophie by Guy Burt
Are You Still There by Sarah Lynn Scheerger
Once More the Hawks by Max Hennessy
Arms of a Stranger by Danice Allen
Death of the Mad Hatter by Sarah Pepper
The Mask: A Vanessa Michael Munroe Novel by Taylor Stevens
Steamlust by Kristina Wright