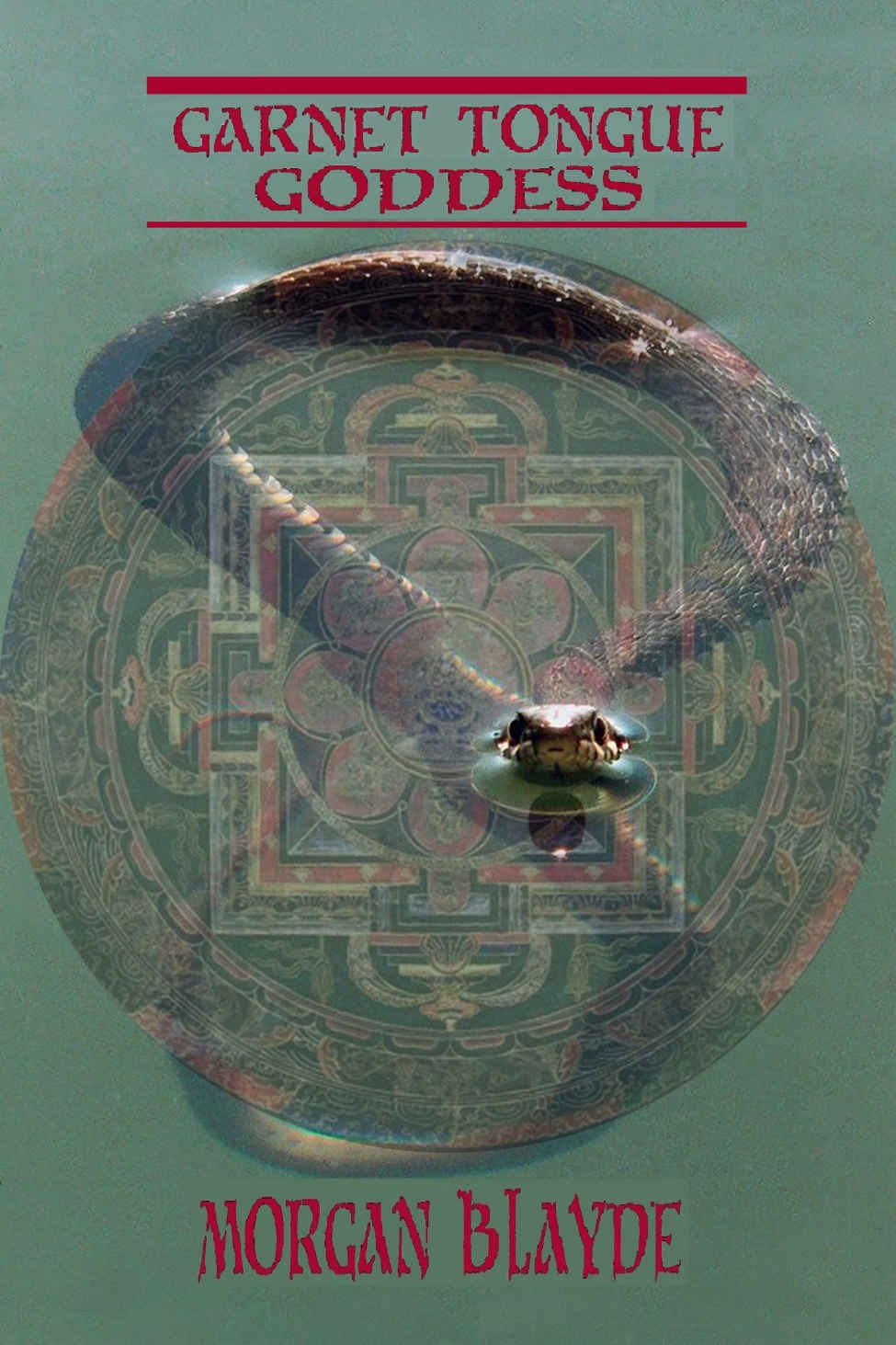 “The only problem with the night before

is the morning after.”

I was at the edge of asleep.  One hand cradled the grip of the PX4 Beretta Storm compact, a semi-automatic lying under my pillow.  Sleeping with my favorite handgun might one day save my life.  Feeling warm and mentally buoyant, traces of whimsy swirling in my thoughts, I could only admire the way I’d yet to shoot myself in the head.

I’m so damned gifted
.
Okay, so steel weapons get me hard.  None of my sexual partners have yet complained.

I rolled onto my back, one hand flopping to the side, exploring the sheets as I tried to remember who the lucky girl was last night.  I felt a sheet-covered hip and traced a line along her ribcage.  The angle of the ribs told me she was facing away from me.

I rolled behind her, cupping her sweet ass.  My hand slid to her breasts.  I thumbed a nipple, feeling it harden, and gripped the delightfully generous tit, squeezing gently.

Golden eyes slitted open in the back shadows of my mind.  My inner dragon spoke to me.
32 C-cup.  Nice
.

Before my inner dragon first made himself known to me, I’d thought this “appraisal ability” to be
mine
.  I hadn’t known it was borrowed talent.

My hard-as-steel cock spoke to me, too:
Fuck, yeah, bury the bone!

I tugged the sheet down to her hips, baring naked flesh.  My visual range shifted from human to dragon, piercing the gloom of my Clan House bedroom.  The room seemed to actually brighten.  Drawing back to give her room, I rolled her toward me.  My sleeping partner had her eyes closed.  Her pale ashen hair—probably blonde—was styled in a pixie cut.  I checked her ears to see if they had elfin points.  Nope.  Her nose was pert, her lips generous, her lipstick probably well faded.  Not all details were available to me.  Shadow lay along her face, and pooled in her throat and navel.

I moved in and licked a puffy areole.  Taking her scent, I found no indication of vamp or were-critter.
Just human; not my usual taste
.  I wondered if this was technically slumming.

“Ummm, nice.”  She stretched.  Her hand went under my pillow.

I tensed between my shoulder blades, waiting to see if she were going to try and shoot me with my own gun.  Stranger things have happened.

“Umm, Caine?  Why is there a gun under your pillow?”

Wow, she has to be as drunk as me, and she remembers my name.
That put her one up.

Her hand came out from under the pillow—without my gun.  I relaxed and smiled.  “Women can be scary.”

She pushed me on my back as she rolled on top, staring down into my face, her own features shadowed by her shift.  Her hands found my wrists, pressing them down, capturing me.  A light growl wavered in her throat.  She grinded her pelvis into my mine.  “Oh, you have no idea.  I am going to have my way with you now.  Just surrender to your fate.”

Much later, naked, I slid from bed and ghosted from my room, into my suite’s common area.  By then, I remembered I was at the Old Man’s demon compound on the Island.  Magically shifting between here and my Malibu house, and my fortress in Fairy, I often forgot my location until morning coffee brought me fully to myself.

I heard the soft pad of cat feet behind me as I went to the kitchenette.

She was just trying to spook me.  The spirit leopard was a friend, more interested in my coffee than anything else—except for blood, but she knew I wasn’t about to open a vein for her; I’m selfish that way.  If she expected me to jump at her presence, she hid her disappointment well.

She bounded ahead of me, leaping up to the granite counter top to look me in the face.  She asked, “Are your eyes open, kitten?  You can make the coffee, right?”

My glance went to the coffee maker.  The LED timer was running, moments from engaging.  I waved a hand at the machine, making a mystic pass.  “By the fucking power of Castle Grayskull, I have the power!”  I figured the reference to
He-Man
would be wasted on the leopard, but I couldn’t help myself.

On cue, the coffee maker turned itself on.

I dropped my hand to my side and went inside the kitchenette area.  I got us two large cups from a cabinet, setting them next to the coffee maker.

Leona stared at me, mouth gaping, white pointy teeth on display.  “How’d you do that?”

“Magic,” I lied.  “There’s a new tattoo on the bottom of my left foot that gives me power over all coffee makers.”

The pot gurgled agreement, backing me up.

Minutes later, Leona had a steaming cup in front of her.  She didn’t drink it, just savored the roasted scent that took her mind back to her carefree days in Brazil.  I carried a steaming cup back into the living room and settled on the white loveseat.  The leather felt cold under my butt, but I endured.  The seat faced the balcony doors overlooking the back of the clan house.  The brightening sky announced the coming of dawn.  Normally, I’d still be in bed at this time, but I had a busy day today and had to accommodate people that didn’t sleep in until noon.

I sipped at my coffee, set it down on the coffee table, and reached for the remote to the large TV dangling from the ceiling on steel struts.  I thumbed the remote.  The TV snapped and crackled on, ionizing the dust on the screen.  Osamu had apparently missed it on his last dusting expedition.  I surfed over to a news channel.  There’d been another terrorist attack somewhere in Africa, a tourist hotel.  Bodies were still being counted.

Nobody’s going to be safe until everybody’s armed.  You’d think the world would learn from the carnage in gun free zones.

My bedroom door was on my right.  A door on my left opened.  Yawning, Osamu left his room.  He politely covered his mouth and belted the silk robe he wore over black silk pajamas.  My Japanese combat butler was old, but moved fluidly.  He was almost as good with a sword as me.  We both had access to demon swords that came when summoned, only his sword was better behaved than mine.  My sword had recently been banished to a dark, empty dimension—I was punishing it for deserting me in battle with a dark fey queen who’d used shadow magic like mine—until I killed her.

Lessons were learned.
One has to be firm with inanimate objects or they get uppity.

“Can I get you some breakfast?  Maybe a robe to wear?”

I was already covered with ink—all my glorious magical tats.  “I’m good.”  I took another sip of coffee.

My bedroom door opened and the nameless, naked lady stuck her head out.  “I’ll take both.”

Osamu’s eyes opened a little wider.  “Ah, company.  I shall see to matters in a moment.”  He retreated to his room, probably to dress and find a robe for the lady.

I looked over at her.  “Don’t take this wrong, but who the hell are you again?”

She frowned at me.  “Teresa Monet.  You didn’t forget our deal, did you?”

She glared.  “I hired you last night.  You signed in blood—which I thought was pretty icky.”

I shot her a stare of mock indignation.  “My body—and soul—is not for sale!  What kind of guy do you think I am?”

Violently, she opened the door wider, setting her tits bouncing.  I couldn’t look away.  Nor did I want to.

She said, “I know just what kind of guy you are.  I’ve read your dossier.”

My eyes narrowed.  This was about a lot more than binge drinking and wild sex.  I was suddenly glad I’d tapped the magic of my armor to send my gun back to where I kept it; she looked riled enough to shoot me as it was.

I casually inquired, “Who do you work for?”

“I gave you my business card.”

Pulling back, Teresa hid behind my door, one arm reaching out.

Osamu carried a silken robe to her, putting it in her hand.  He asked, “What would the lady like for breakfast?”

She smiled at him.  “Coffee, buttered whole grain toast, and half a grapefruit.  I’m going to take a quick shower, then I’ll be out.”

Osamu gave a slight bow, acknowledging the order.  Teresa closed the door on us.  Osamu looked at me, raising an eyebrow.  “And for you, Caine-sama?”

“An Organic Rockstar energy drink and a Corpse Reviver.”

Osamu stared, bewilderment etched into his face.  “A Corpse Reviver?  You need a necromancer?”

“It’s a drink garnished with a slice of lime.  One and a half ounces of gin, three-quarter ounces of Lillet Blonde, Orange Curacao, and fresh lemon juice.  Combine in a mixing glass, add ice, shake, and strain into a coupe glass rinsed with absinthe.  It’s good for hangovers, unless you drink more than three glasses.  Then, it returns you to the dead.”

Still sitting on top of the kitchen counter, Leona whipped her tail. “You can’t remember the lady’s name, but you can recite the recipe for any known drink?”

I sipped more coffee.  “There’s only so much space in my brain.  I try to save it for things that are really important.”

Nun the Wiser (A Deadly Habit Cozy Mystery Book 2) by Morgana Best
Blacklight Blue by Peter May
Reservation (Preservation Series) by Wade, Rachael
03 - You Only Live Nine Times by E A Price
Confession of the Lioness by Mia Couto
Scandal's Reward by Jean R. Ewing
Trick of the Light by Thurman, Rob
The Love Children by Marylin French
Wendy Soliman by Duty's Destiny
Down Shift by K. Bromberg