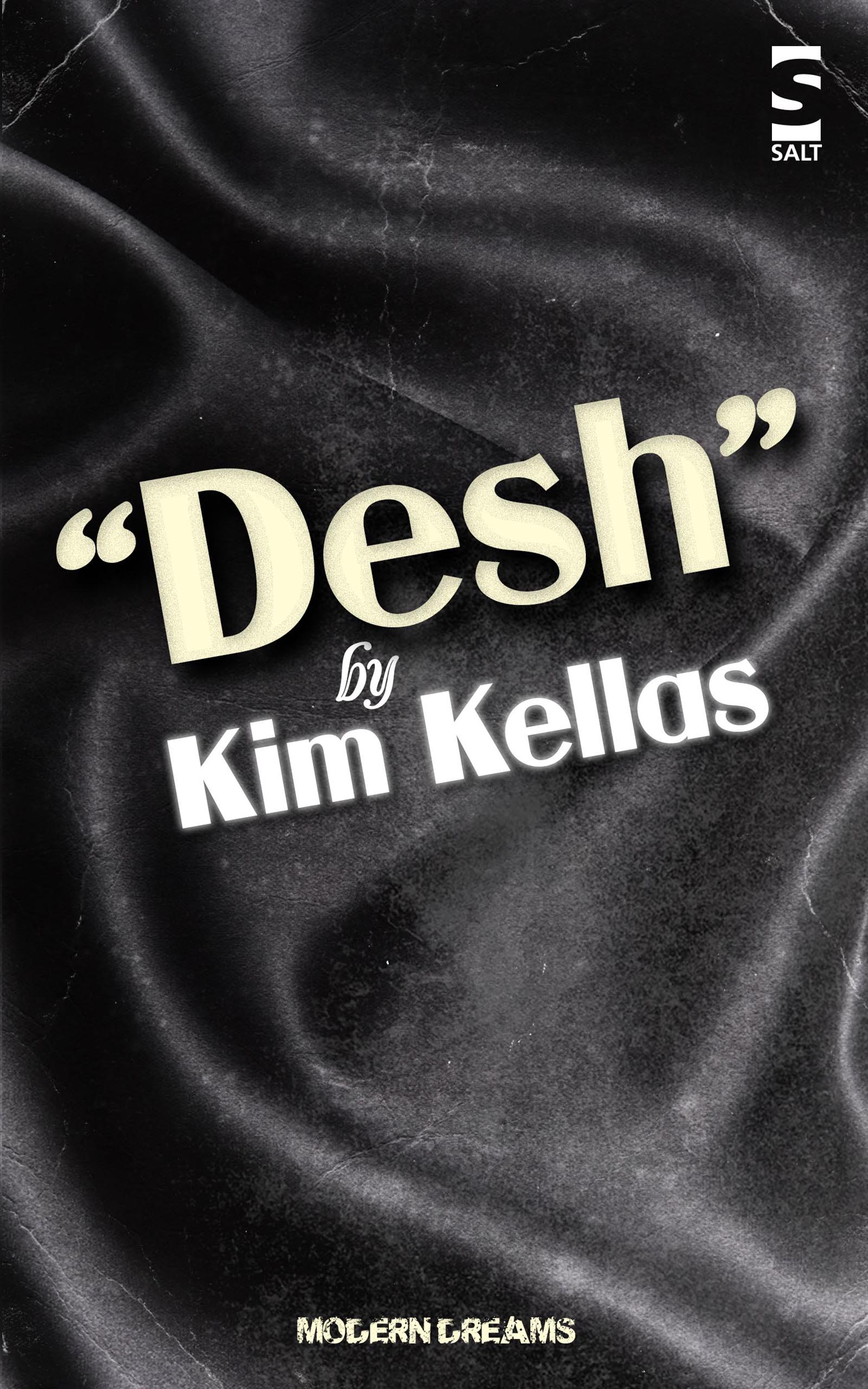 For Aila Begum, marriage is a given, and at twenty four, quite soon. Though London born, Aila's father is deeply traditional and lives by rules of the remote village in Bangladesh he calls home. So allowed no freedom, Aila's learnt to play covertly. When life at home spirals she plays hardest.

Tension mounts as a family trip to Bangladesh looms. Sensing threat, Aila plays for real during Ramadan, with the men her father hates most. Once in Syhlet, it turns out her instincts were right. Her hand is forced in a makeshift wedding and she slides into despair. Until she learns the Forced Marriage Act has come into effect in the U.K.

Back in London, she contacts the Forced Marriage Unit who work behind the scenes, while at night she cruises men and in increasingly predatory encounters until the day her husband's visa is declined and her father finds out why. All hell breaks out and a vicious fight ensues. Next day at dawn she knows what to do. Shaming her father, she flies to Syhlet alone, confronts the people who drugged, deceived and defrauded her, and returns with a proposal of her own.

Born in New Zealand, KIM KELLAS grew up in Sydney and worked as a copywriter before she ran away to London with a broken heart, married and moved to Hampshire to raise a family. In 2012 she enrolled on the Creative Writing MA at Brunel University with Fay Weldon and began writing the novel that became
Desh
. 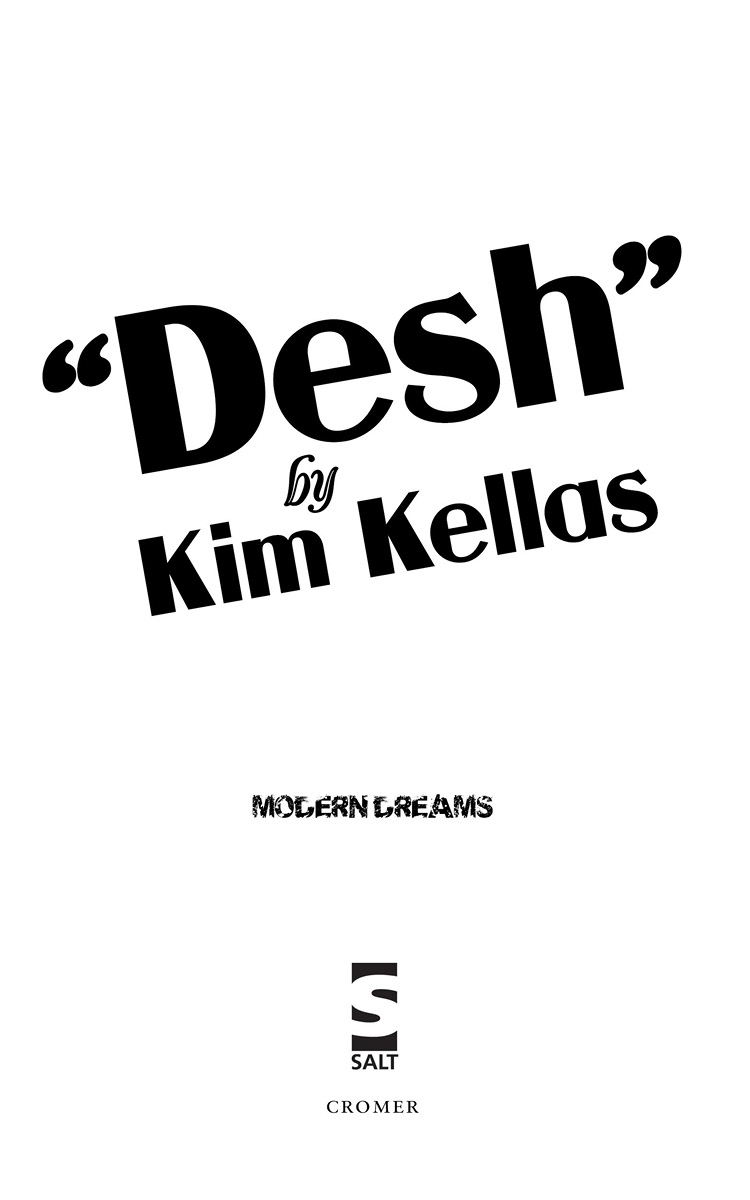 The right of
Kim Kellas
to be identified as the author of this work has been asserted by her in accordance with Section 77 of the Copyright, Designs and him Act 1988.

This book is in copyright. Subject to statutory exception and to provisions of relevant collective licensing agreements, no reproduction of any part may take place without the written permission of Salt Publishing.

This book is sold subject to the conditions that it shall not, by way of trade or otherwise, be lent, re-sold, hired out,
or otherwise circulated without the publisher's prior consent in any form of binding or cover other than that in which it is published and without a similar condition including this condition being imposed on the subsequent purchaser.

The car door slammed, he walked away and Aila Begum leant back in her seat. She watched his low slung jeans slink off and then she exhaled. Drops of sweat slid down her chest like sap. She pulled her sari up and adjusted the yellow silk at her shoulder.

The wedding had begun and Aila would be late, but then Bengali weddings rarely run to time. She straightened her headscarf and started the car. It'll be fine, she thought as the car pulled away.

The sky continued to darken all the way into London and by the time she reached Embankment, the clouds hung low as though pregnant and ready to deliver their load. She found the hotel in Whitehall as the first drops fell and scurried through the lobby to the main suite.

She stopped just outside the door and took a few moments to catch her breath and when she knew she was alone and unobserved, she touched her cheek, searching again for the sticky patch of saliva he'd left on her skin, but the remnant of his kisses had dried and gone, so she took one last breath and pushed open the doors of the Northumberland suite.

Inside a vast room swarmed with guests and the swish of saris surrounded her. Here and there she caught flashes of gold from the aunties and mothers, wives and daughters, while vast chandeliers clinked overhead and the men walked tall, contented bellies protruding under their sherwanis.

Aila tried to weave between the close knit groups as the women's chatter mingled with their clattering bangles. âLook, that girl's on her own, with no father or husband beside her. The shame,' she heard and her cheeks burned.

But no amount of black-kholed spite would keep Aila away from her best friend's wedding and she walked defiantly towards Shafia who sat on the stage at the far end of the room, next to her husband of twenty minutes.

Draped in crimson silk, she looked remote, almost regal. The burnished tikka hung in a line down her forehead and a thread of gold glistened across her cheek, held by the hooped ring in her nostril. Aila caught her eye and Shafia winked back, resuming her pose as other friends approached the stage.

“Shaf looks amazing â can't believe she went so traditional,” and seeing Aila close by, someone else added, “Love how you've done the mehndi. The blending's perfect.” She found her seat at the main table and watched the elders mount the stage and give their blessings. Then they posed under a gold canopy with the couple. As disposable cameras clacked in a frenzy around her, it seemed that her friend had ceased to be Shafia, and had become instead just another bride at another walima.

The web of gossip spread in whispers. “How much have they spent? She's not Karishma Kapoor,” and “they did well to get that one married off when they did,” until mercifully the waiters appeared and when the silver platters began to arrive at the tables, she thought, thank God, they've got something else to devour now.

Beside her, Shafia's mother sniffed and dabbed her eyes. “Do they have nothing better to do than criticise? Who are they to sneer, anyway? Ha. The stories I could tell. But they must be invited, you know how it is.”

“And what about you? When can we expect to see you settled? This solo life of yours must come to an end. You know, if you played it smart you could marry someone like Nayan. He's on the up. Got a good job â in I.T. isn't it?” she said to her husband. “Very well paid.”

Of course she'd be delighted to help Aila when the time came and she went on about the best proposals and Shaadi.com, the timing of the Nikah and the price of gold, the relatives from Birmingham and the cost of sarees through the whole eight courses of steak, lamb kebabs, roasted chickens, rice and vegetables, until the sticky mithra sweet arrived and even her husband could take no more.

“Enough,” he said. “You've said your piece. The poor girl's desperate to escape,” and, though âdesperate' didn't begin to describe it, Aila made polite denials before moving away to the next table. As she approached, Shafia stood up. “Was she awful?”

“Worse than usual,” said Aila, returning the hug. ”But I survived. Shaf, you were beautiful.”

“Omigod. I couldn't breathe on that stage and these lashes weigh a ton. Do I look like I'm having a stroke?”

Aila laughed. “Stop it. They're fine, you were perfect and the sari looked amazing under the lights. The beads, the gold work â everything. I thought Nay was going to wear a suit?”

Shafia ran her hand down the folds of crimson silk. “Oh don't â that was his mother at the last minute. She insisted on the full gold sherwani thing, you know: âIf your father and I are going to go to all this expense the least you can do is show some respect for your culture,' yudda yudda yudda.” They edged away from the table and linked arms.

Aila took the private moment to ask, “How much does Nay know?”

“Ah. We had the âtell me about your past' chat, as you do, but I didn't tell him everything. That'd be kamikaze. I just said we had good times.”

“He has too, so that's fine, but the party's over now, apparently. Has your Dad rung yet?”

“No â he will soon, though. I'll leave after the dancing.” The banquet seemed to be coming to end and people were milling about, thinking of what was going to happen next.

“Okay, talk when all the faff's over,” Shafia said.

Aila found a quiet corner to check her phone and wait. From the far doors, a line of drummers emerged with barrel-shaped dhol hung low across their bodies. As they marched in diagonally, their distinctive rhythm filled the room. Twelve men in peacock blue uniforms advanced behind the drummers and moved in formation to the dance floor.
Silver swords twirled with military precision under columns of white light, while the dhol drums pounded.

Her feet tapped to the chaal beat and the band played tune after tune for the guests packed tight round the dance floor. Then, as the dancers took their bows and left behind the drummers, rhythmic clapping rolled into applause.

On cue, the lights came up again and Aila made her move. With practised stealth she crept back round the edge of the room, taking care to avoid any aunties.

Outside, the rain had been and gone and the roads shone black. She pulled the new shoes off and tiptoed past the stone-faced buildings of Whitehall, letting her sari trail behind in the wet until she came to the car at the end of the next road: a top-of-the-range Peugeot 308 that her father had insisted on, to keep her from the eyes of men on public transport and bring her home quickly.

She clicked the key for the fun of unlocking the door from a distance and slid into the driver's seat, like a child who'd found the best hiding place, and checked her phone again. The Blackberry screen showed a missed call from the number she'd been checking. Opening the bag of tricks on her lap, she deepened the kohl round her eyes, and calculated how long it would take to drive to Clapham and see him again. It should be possible before her father called.

It was just after ten. As she drove round Clapham Common, Friday night was in full swing. On the pavement, English girls strutted, bare arms dimpling under the light as bouncers watched from the shadows. Stilettos clicked and cars crawled alongside, waiting for the clubs to open.

Aila cruised with the roof down and a lemon headscarf draped loosely over her hair. M.I.A. blasted out like a siren call, âall I wanna do is bang bang bang bang' and it didn't take long. SUVs and BMWs slowed beside her, as the lights changed to red.

“You looking for me, babe?”

A blackened window was lowered. “Show me that smile again.”

“Give me something to smile about other than your driving,” said Aila.

She revved hard and swerved into a side street. The BMW followed and she listened to the footsteps until the low slung jeans appeared at the window.

“We going to finish what you started today?”
He tried the door handle.

“Might do.” Aila slid a hand up the arm now stretched at the side of the car window.

“To look at you, who'd have thought?”

She brought the window down. “Thought what?” and leant forward, then flicked his shirt open and bit the skin exposed above the thick leather belt.

He pushed her headscarf back and pulled her face towards him. “That a girl like you knew how to do the things you do. Follow me,” he said, one hand under her chin, “l need to finish this.”

“You're a grown woman. You can do what you like.” He walked around the front of the car and opened the passenger door.

“Not quite. Let me show you what this Asian girl can and can't do.”

It didn't take long to reach the south side of Streatham Common. She turned off the main road, and followed a gravel path that bordered the common and led through the trees to the playground.

She'd timed it just right: the car park was still empty. She crept across the damp grass, led him past the creaking swings to the old plane tree, where she slid one hand up his arm and moved into him like a hatching snake.