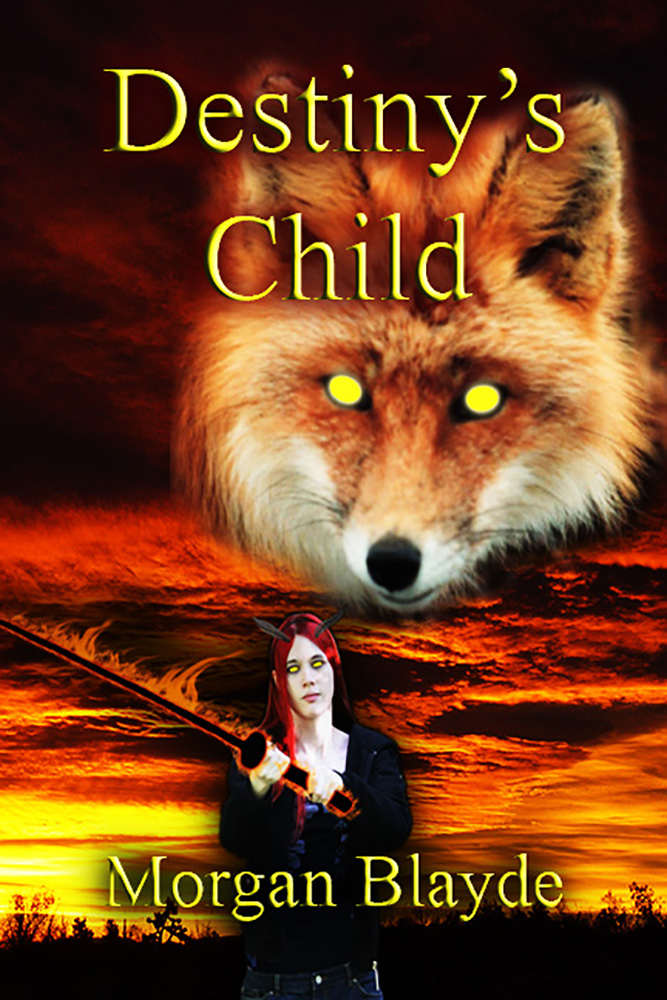 “Find a rhythm for your heart.

Pain will
always comfort you.”

A canvas body bag hung on chains in front of me, waiting for punishment that was coming.
Just like me.

Born under a dark star, I guess
.  I rolled my fingers into fists and heard a soft creak from the leather half-gloves I wore.  They left my fingers uncovered, exposed, but put pressure over the knuckles, lessening the chance I’d take damage while punching.

The surrounding darkness was alive, stirring with currents of hunger, an obsidian sea that had devoured the world—except for this island of light in some nameless boxing gym.  A cone
-shaped plate directed the harsh white glare of a bulb down on top of me.  The light made my pink sweats glow as I danced and shuffled, loosening up my muscles.

Protruding from the absolute darkness, still mostly in shadow, was an empty boxing ring.  Elsewhere were weight benches, speed bags, and several vending machines.  Tukka was trying to bust into one of them—Dread Pirate Tukka that he was, a red bandanna over his head, a stuffed parrot with glass eyeballs sitting on his shoulder.  The vending machine was big, but hopelessly outclassed by the two-ton, teal blue, fu dog.

“For Gosh sake, Tukka, just put in some money.”

Tukka not pay for it his whole life.  Not start now. Besides, Tukka got no clothes.  Where he supposed to keep cash?

I considered telling him exactly where he could keep it, but that would have been rude—if funny—and unladylike as well.  Besides, I had a body bag to pound on.  I hooked in a right.  My leather-clad fist sank into the bag, rocking it, sending it swinging.  The thing was harder than I expected.

It came back at me.

Everyone was coming for me these days.  Virgil wanted me as a phantom burglar, ferreting out dark secrets he could trade to Homeland Security for favors, when I wasn’t helping him with monstrous menaces.  Cassie was there, wanting to make up for all the time we’d lost since she’d given me up as a baby.  The news media was trying to get a line on me.  I’d become an internet celebrity after using my kitsune foxfire to stop a convenience store robbery.  That was one of the reasons I’d gone into hiding in the wilds of east Texas, which is how I crossed trails with Fenn, a feral presence at the Human Potential Institute where we both lived.  Apparently, he’d seen me and knew at once we were destined to be soul mates.  Sadly, there was a demon out there with the same idea, a demon who’d left a weird black brand on my arm as a mark of ownership.

I left-jabbed the body bag, rocking it another direction.

Off to the side, I heard the sound of breaking glass.  “Tukka!  That’s stealing.  And I hope you’re not helping yourself to chocolate.  You know it’s bad for you.”

Dream chocolate safe
, he reminded me.
This not real world.

Oh, yeah, that’s right.  I can do anything in this place
.

I hit the bag with a flurry
of fists, dancing forward and back as it jolted with a rattle of chains.  “My heart is pure…” I huffed, “so I have the strength of ten … tigers.”

Keep guard up, Grace.  Not good to lead with face.

Work hard.  You can be a contender
.

“For what?  Biggest target across the known dimensions of time and space?”

I’d been brought to Earth and raised by foster parents as a human girl because my own people—off on kitsune world—wanted me dead.  They were scared.  My dad was the ultimate boogie man, the overlord of the shadow men, and a massive control freak.  They’d been afraid I’d inherit his power and become an unstoppable freak.

I sighed deeply from the cockles of my soul.
Well, I’ve got the freak part down
.

My dad knew about me now.  We had a tentative peace going, but that didn’t mean he didn’t have plans simmering for me, expectations I had no interest in meeting.  He’d tried engaging me to a
shadow-man prince named Onyx.
Another person who wants a piece of me.

Even Tukka has an agenda.  Sure, he looks out for me—until something comes along and distracts him—but he and the other fu dogs are expecting me to one day lead them off of Earth in a holy quest for their home world.  Apparently, it is a sealed dimension that I’m supposed to be able to open for them.

Grace key to many things
, Tukka said.
Good to be wanted, right?

Right.
I speeded up the rhythm of my fists, losing form, pounding for the sake of pounding.  My lungs were burning for air, my heart thudding and thudding.  My teeth were clenched, my muscles tight.

And then the stupid bag broke open.  Like blood, sawdust poured out onto the mat.  The canvas was tattered, rotted as the dream took a darker turn.  A body fell out of the body bag.
My body.
I stood there, gasping for breath, bent over, my gloved hands on my knees, staring down at my dead self.  There was the life I’d once had.  That was the
me
that had been happily ignorant of my shadow-fox nature.  The
me
from before my foster parents started fighting, throwing away their marriage.  That was the
me
I’d never get back.

“You put that in there, Tukka?”

I heard the glass of another vending machine being broken.
Nope.  Tukka too busy.

A harsh, inhuman scream slashed across the dream.  It shattered.

I snapped into a sitting posture.  My sheet and blanket slid off.  I smacked my alarm clock into silence.  On the nightstand, it said 5:30.
Time for my morning run.
I looked across the darkened room to my roommate Jill.  She grunted, turning in her sleep, and settled again with a gentle snore.  She was used to sleeping through my alarm.

I slid to the edge of my bed and reached to the floor where I’d left folded sweats, dark green—definitely not pink like in my dream.  I didn’t like the way that color clashed with my dark red hair.  I shed the oversized tee shirt I’d been sleeping in.  It was damp with sweat.  I wanted a shower, but I was just going to get sweaty again from my run.  The shower could wait until I got back.  I dressed quickly, my kitsune vision better than human in the dark.  Standing, I snagged my hoodie off the back of my desk chair, putting it on.

Until very recently, I’d come and gone without leaving a trace by entering the ghost realm, becoming something like a ghost myself, an unseen presence able to walk through walls.  This irritated Hammer, the HPI security chief.  We’d reached an agreement: I could come and go when I liked, but I had to be seen doing it so he could keep track.  That’s why, instead of ghosting out the window and drifting down to the sidewalk, I headed out by way of the door.  I stood in an entry way to the suite, closing my bedroom door behind me.  Ahead was the common bathroom, to my left, Drew’s room.  I opened the door to my right and entered the hall.  The lights were on a nighttime setting, most of them off, allowing a little gloom in the building.  Mounted wall cameras tracked me as I headed for the lounge and the elevators.

The lounge was silent.  I had the place all to myself.  Except for Fenn.  I saw him approaching from the boy’s wing of the dormitory floor.  He strode with an unconscious arrogance, like a wild beast that’s too strong to care about other predators.  His hair was damp from a recent shower.  My kitsune nose picked up his natural musky scent through the chemical odors of body wash and antiperspirant.

I noticed he wore black sweats and sneakers.
The better to go ninja in
.  Not that he was a real ninja.  I’d met some of them, I knew.  Fenn’s heritage lay in his half-human scent and his kachina-yellow eyes.  His dad was Coyote, the Trickster from Native American lore.  They had the same eyes.

Fenn flashed me an easy smile as he entered he lounge, padding up to where I waited for an elevator car.  He leaned against the closed door, smoldering eyes absorbing my face.  “You’re early.”

“Did you forget?  We have a breakfast date this morning.”

The last fog from not enough sleep evaporated from my brain and I remembered.  He’d worn me down, and I’d agreed to let him take me down the road for breakfast today, a nice break from cafeteria food.  “I’m going out for my morning run first.  Be back in about an hour.”

The elevator door opened.  He stayed leaning against—nothing, refusing to fall over.

“How the hell are you doing that?”  I stepped past him, onto the elevator.

He grinned.  “We all have our secrets.  I’ll be waiting here for you.”

I nodded as the door closed, separating us.  The elevator started down, taking weight off my feet.  It was a similar sensation to what I felt in the ghost realm where gravity and other forces were weaker.  I arrived on the ground floor.  The doors opened and I stepped out into an empty lobby.  It was too early for the HPI receptionist to be at work.  Only the cafeteria workers got here this early.

I strolled to the entrance.  The glass doors threw my reflection back at me, my features sharp, foxy, passing for human.  A glass panel on a waist-high post glowed red.  I put my hand on the glass and waited a second.  The glow went green and the door opened for me.  This was one of Hammer’s security upgrades.  I actually thought it kinda cool.

Outside, the November wind was brisk.  I found it bracing.  A human would have said “damn cold.”  There are a few benefits to being half shadow and half fox spirit.  Leaves scraped past me as I crossed to drive and headed for the front gate.  There were other buildings I knew very little about.  Apart from the steel and glass tower I’d just left, the place looked like an industrial park.

A silver Lexus slowed as it passed me.  Some of Hammer’s people, making sure I wasn’t some unauthorized intruder.
Hmmm.
The would-be writer in me considered that phrase.
Is there such a thing as an authorized intruder?
The Lexus went on and so did I.  I was almost to the front gate when savage pain made me drop to my knees, grabbing my arm—the arm with the demon brand.  It burned as if on fire.  The sensation faded.  I felt a supernatural cold in the air beside me, an unseen presence.

It was Wocky.  He wanted something from me.

If I
crossed over
into the ghost realm, I’d be able to see him.  We could talk.  But without Tukka around, I’d be at the demon’s mercy.  Not something I’d enjoyed in the past.

Die for Her: A Die for Me Novella by Amy Plum
Big Mouth by Deborah Halverson
Convicted by Aleatha Romig
The Mind (The Reluctant Romantics #1.5) by Kate Stewart
Addiction by Shantel Tessier
Miss Phipps and the Cattle Baron by Patricia Watters
Hot as Hell by Helenkay Dimon
Revolutionary Ideas: An Intellectual History of the French Revolution From the Rights of Man to Robespierre by Israel, Jonathan
Longarm and the Sins of Laughing Lyle (9781101612101) by Evans, Tabor
Nights With Parker by Tribue,Alice