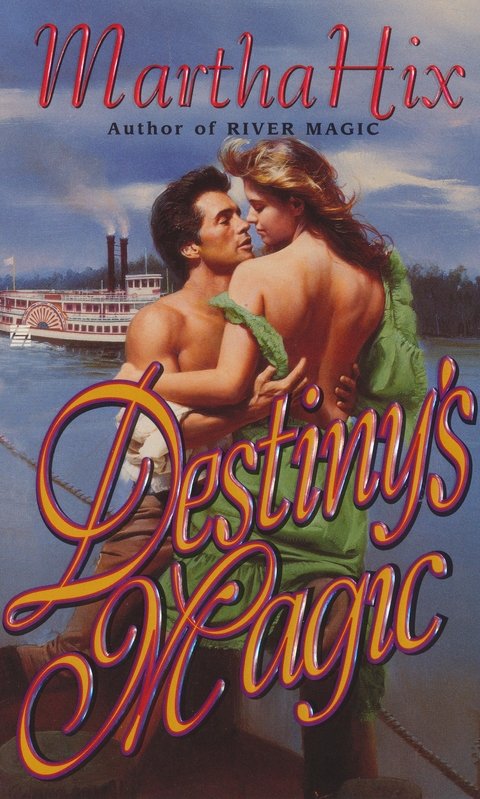 The very last thing he needed on his ship was a woman!
“You need me, sir,” she said.
He didn't feel the pain. What he felt was Susan's touch, soft yet sure. She might also be wounded, but she had strength to her. Just what he needed, to be attracted to a married woman with a violent husband in her wake. He drew back his hand and rewound the bloodied towel.
“I'll repay you for passage. Soon. For now I'll be at your service.”
At his service? He grinned. From the suddenly abashed look on Susan's pretty face, she'd realized the double meaning of her offer. She knew the joys of silk sheets, or at least sheets, he figured. After all, she'd borne a son. Anything might happen.
She looked him straight in the eye. “I can cook and clean and mend. Starting with your hand, if you'll permit me.”
It would take the meanest son of a bitch on the Mississippi to send her back down the gangplank. Some people called him mean enough. Many said he made his own rules. Becoming a shipping magnate at a tender age, Burke had found that rules were made to be broken. He did as he pleased. But he tried to be fair about it.
At the moment Burke wanted to be as mean as the devil himself, but he couldn't. It looked like he'd gotten himself a woman.

Praise for Martha Hix's
Destiny's
Magic. . . .
“Only Martha Hix could spin such a tantalizing tale. . . . Fantastic.”
â
Rendezvous
Â
“Destiny's Magic
is just plain fun!”
âThe Literary Times
Martha
Hix
award-winning Zebra author brings you
The
Magic Lamp
trilogy
Â
The whole thing started
with a trio of well-meant wishes
“brides for the O'Brien brothers.”
Â
Three diverse brothers . . . three very different stories.
Â
RIVER MAGIC
Â (4863, $4.99/$5.99)
India Marshall lied her way into a Civil War prison to spring a Rebel. Major Connor O'Brien, in charge at Rock Island, Illinois, knew a fraud when he saw one. He tried to eject the beguiling Southerner, but the magic of love had its way with best-laid plans!
Â
DESTINY'S MAGIC
Â (5462, $4.99/$6.50)
Susan Seymour, a youngster in tow, needed to run away
from
the circus. No one but Burke O'Brien, riverboat captain, could help. Fighting the magic spell, he meant to leave her high and dry. Yet Burke took Susan all the way to New Orleans . . . and into his heart.
Â
MAGIC AND THE TEXAN
Â (on sale, January 1997)
Drummed out of a town called Liberal, Bethany wanted everything Texas rancher Jon Marc O'Brien offered. Marriage, respectability, children. Yet he'd made those offers to a mail-order bride, not to Bethany Todd. But that didn't stop her from taking a dead woman's identity
or
her man!
Â
Available wherever paperbacks are sold, or order direct from the Publisher. Send cover price plus 50Â¢ per copy for mailing and handling to Penguin USA, PO Box 999, c/o Dept 17109, Bergenfield, NJ 07621. Residents of New York and Tennessee must include sales tax. DO NOT SEND CASH!
DESTINY'S MAGIC
Martha Hix