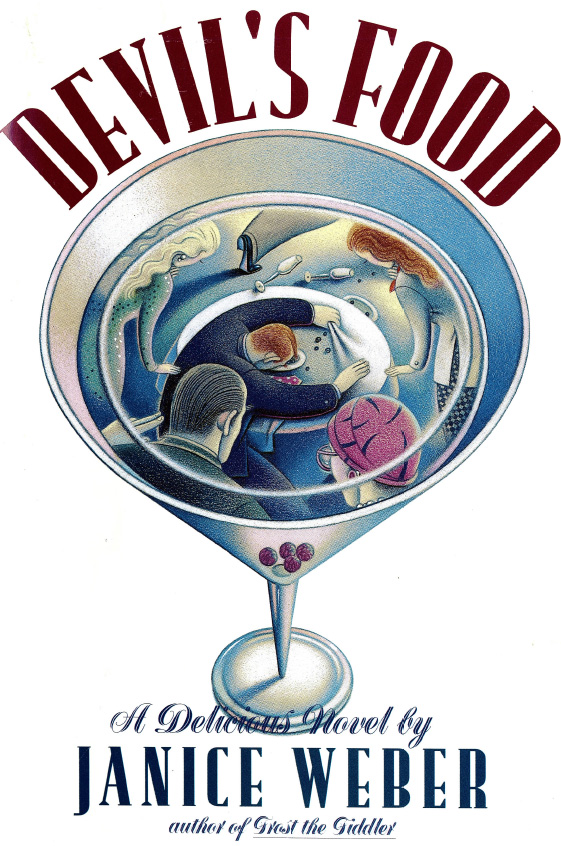 Other books by Janice Weber:

The Secret Life of Eva Hathaway

Publisher’s note: This novel is a work of fiction. Names, characters, places, and incidents either are the product of the
author’s imagination or are used fictitiously, and any resemblance to actual persons, living or dead, events, or locales is
entirely coincidental.

With special thanks to
Irwin Gelber, Stanton Kessler, Rudy, Andrew, and Rosebud

Other books by Janice Weber:

I
believe that my wife is having an affair. No, she hasn’t bought thick, new perfume or leopard print lingerie, hasn’t revamped
her hair ... There’s just an energy about her that I can’t place. She’s restless at night and leaves our bed to sit in the
atrium, where I find her staring at the pale moon beyond the glass. Sometimes she even falls asleep on the couch out there.
I rarely wake her then; instead, I pour myself a scotch and sit across from her on the white wicker chair, waiting, studying,
wondering what dreams could occupy that lovely head. I am fairly sure she is not dreaming about me, not in a starring role
anyway. We’ve been married too long for that. Her face is so still that she could be dreaming of nothing at all ... But why
leave the bedroom, leave me, to dream about nothing? No, she dreams, Emily definitely dreams. Suddenly her face contracts
and she sighs. It is a sexual and exquisite sound, so full of longing that I can almost feel another man there with her in
the shadows. When she wakes up afterward, sees me sitting across the way, she stares at me a tiny second as if trying to remember
my name. “Ross,” she recollects finally. “What are you doing here?”

Could another man be running his hands, his gross thumbs, along my wife’s legs? Opening her mouth with his own? No, never,
I think; then she sighs again from the cold couch and I realize that this woman remains the great enigma of my life. After
fifteen years, I still adore her. How many husbands could say that? None that I know. My more domesticated colleagues at the
office regard their wives as permanent fixtures, dull but constant as the earth; the restless types see their wives as useful
insulation against demanding mistresses; the hard-core libertines like Dana think of their wives in terms of live-in alimony.
Very few of my friends have actually divorced, however; that would be economic suicide, for what? A little breathing space?
Hell, we promised for better or worse. Those who ended up worse volunteer for the projects in Alaska.

I never liked being away from Emily longer than a week. At the beginning of our marriage, when she really wanted children,
she’d come with me on the long-term jobs. We spent almost a year in Seoul while I was working on an art museum. She’s come
with me to Tokyo, Paris, Istanbul, not for days but for months on end. While I coaxed a building from a tremendous hole in
the ground, Emily wrote articles for magazines and even began a book, which I was not allowed to read; she eventually burned
it, so I never got to know what was on her mind all those long days so far from home. When she stopped writing, Emily began
studying the local cuisines, saying it was easier to slice vegetables than mince words.

I watch the soft rise and fall of her robe as she sleeps. Over the past hour, as she’s tussled with her dreams, the sash has
come undone. Soon the white lace will slide from her hips. I want to wake her, take her ... but I am a coward. If she turns
me away, then I’ll know there’s someone else. I’m not ready for that yet. No, I’ll watch, wait, try to stifle my morbid imagination.
Maybe I should go back to bed, let her wake up shivering and naked alongside the rubber tree. She doesn’t want to
see me spying on her like this, asking anxiously what she’s doing out here again ... or does she? Maybe she comes here on
purpose, forcing me to question fifteen years of conjugal harmony. Maybe she’s unhappy with everything I am and do. She’s
going to say she’s frustrated, emotionally dehydrated, bored. It happens: I know two men at the office whose wives told them
just that, out of the blue, right about the time they were making their final mortgage payments. Sorry, honey, no more interest:
Will Emily be telling me the same thing? If s crossed my mind. For all I know, she wants to start over again with someone
who understands her better, someone with a little more pizzazz than an architect. Maybe she could have children with another
man.

Maybe she’s already tried. She could be pregnant now, wondering what to do about it. She wouldn’t lie to me, I think. She’d
not tell me a baby were mine if it weren’t. Emily has more class than that. Would she have an abortion, at her age? I doubt
it, not after all those years of trying. She’d have the baby no matter who sired it. Wouldn’t she? I’ll have to keep better
track of her menstrual cycle. See if she suddenly begins wearing sanitary pads. That would be a dead giveaway: sanitary pads
and no sex for three weeks. I think that’s what my partner Dana said when his girlfriend had an abortion. I should have listened
better.

Let me think. Who could it be? Any damn man at all! My wife is still beautiful. She’s very smart, very elegant, and she’s
tough. She has a laugh that breaks men’s hearts. I’ve seen conversations stop when she laughs. Men pause—no, freeze—and look
at her lips with a mixture of intense animal lust and pure helplessness. It’s a laugh you just ache to put your mouth over
and try to swallow: half virgin, half smoldering ruins. She doesn’t laugh often, though. That’s why it catches everyone so
off balance. Even me, even now. Two things might make her laugh: private jokes and embarrassing situations, the type you can’t
foresee and usually can’t avoid. Dropping a hundred-dollar bottle of wine, for instance. When was the last time I heard her
laugh? Months ago. We were at a backyard fundraiser on Beacon Hill. She wore a black sheath with tiny straps, architecturally
perfect: left nothing and everything to the imagination. It was the first real spring night of the season and the air was
perfumed with lilacs. Emily was talking to Guy Witt en, her boss, on the veranda. He was standing as close to her mouth as
socially acceptable, as if he had a hearing problem. He looked at the hostess in the garden, muttered something, and Emily
laughed: Every man within ten feet turned his head. Later that night, I asked her what Guy had said. She couldn’t remember.

Could it be Guy? He’s obviously infatuated with her. She sees him five days a week. But an affair with the boss? She wouldn’t.
Too tacky. She likes her job too much anyway. Nice restaurant. The kitchen is her fiefdom. She wouldn t jeopardize that for
a few muscle spasms, would she? Guy’s been married twice. Emily wouldn’t settle for being number two and a half.

No, it’s someone else. I hope it’s not someone I know. If it’s a friend, I might have to kill him: I am a man of principle,
after all. Would I divorce Emily? I doubt it. Forgive her? I doubt that, too. The moonlight has crept up her leg, past her
knees, minute by minute approaching those shadowy places I consider my very private property. No trespassing there; violators
will be prosecuted. Is she guilty? Even if she isn’t, I might have to punish her a bit. Move out for a few nights. I may occasionally
neglect her,
but she has now caused me much anguish. There’s a big difference in liability here.

Silly old man, you imagine things! She’s not involved with anyone else. How could she kiss me good morning, sit with me at
breakfast, answer my calls at lunchtime, spend her evenings with me, and at the same time be sleeping with another man? Could
she be capable of such duplicity? I just dont the hell know. Duplicity might run in the family. Look at her twin sister, Philippa,
the actress: voracious and cunning as a panther. Underneath, is my wife just like that? Impossible. When would Emily have
time for an affair? She works hard. She’s tired when she gets home. Weekends she spends with me. If she’s seeing anyone, it
would have to be during afternoon rush hour. Or when she says she’s running a few errands. I’ll have to take more notice of
those errands, inspect what she’s actually brought home. She’s been doing a lot of clothes shopping lately—and returning empty-handed.
Strange that I never thought it unusual before. I should start asking exactly where she’s been shopping, who waited on her,
why she bought nothing. I’ll have to watch her eyes when she replies.

Is something the matter at work? Does she have a medical problem she’s not telling me about? Ordinary midlife crisis, perhaps?
I should suggest a long vacation far away from Boston. She doesn’t have to work. Hell, if she insists on getting out of the
house, I could buy Emily her own restaurant. Maybe that’s what I should suggest, a cozy little number on the Wharf or in Back
Bay. No, right down the street, at the foot of Beacon Hill. I’d design the interior for her. She could hire her own staff
and not worry about Guy on her back anymore. Would she like that, no more Guy? I definitely would.

Her breathing is so deep and regular now, like an innocent child’s. I should go back to bed, try to sleep. It’s getting chilly
out here. Where does she keep the spare blankets? I don’t want her catching cold. Ah, that face, those secret dreams, they
drive me mad. I’ll have to pull myself together by breakfast.

Ross Major, the architect, preferred to have his morning coffee on the balcony of his Beacon Hill home, where he could watch
the sunrise tinge Boston’s skyline first a tender pink, then a fiery red: God blessing his work. On overcast days like this
one, however, he drank his coffee inside, comforted by the reflection of halogen lights on his polished marble countertop.
Today he was just finishing the sports pages as his wife came into the kitchen. Almost six-fifteen: she would be late for
work. “Sleep well, love?” he asked cheerfully.

She had dressed in a business suit rather than jeans; on her lapel was the pearl brooch he had bought for her in Tokyo as
a tenth-anniversary present. Pouring her coffee, Ross glanced at his wife’s face. Unusual makeup today, particularly around
the eyes. She had outlined them with black pencil; the mascara looked way too thick. And she had never worn slate blue shadow
to work before. Her eyes were still a little puffy from lack of sleep, or hyperactive dreams. Ross intuitively decided that
this was not the time to mention her night on the couch; he might get a straight answer. “Toast?” he asked.

The Lies that Bind by Judith Van Gieson
Crewel Yule by Ferris, Monica, Hughes, Melissa
One-Day Crochet: Christmas: Easy Christmas Projects You Can Complete in One Day by Barb Asselin
The Pirate by Katherine Garbera
The Heir of Mistmantle by M. I. McAllister
Raistlin, crisol de magia by Margaret Weis
The Godmakers by Frank Herbert
A Secret History of the Bangkok Hilton by Chavoret Jaruboon, Pornchai Sereemongkonpol
Wolf by Madelaine Montague
Alien Contact by Marty Halpern