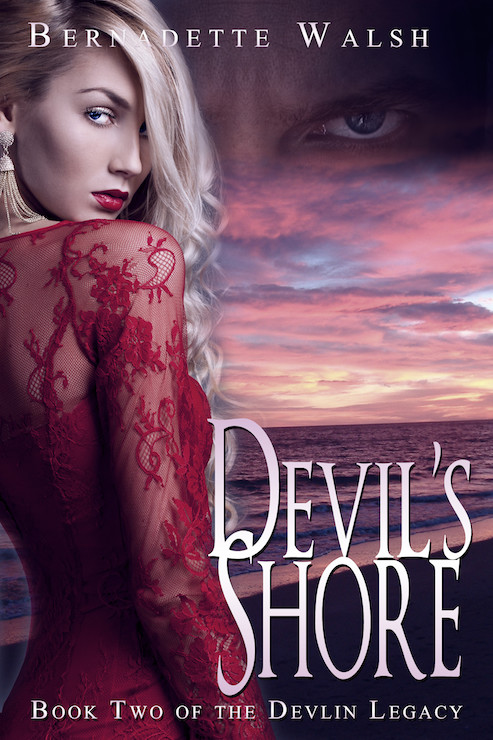 Take heed. The most powerful Devlin witch in generations has come into her own.

Orla has left Ireland, and the sinister shadow of Devlin’s Mountain, behind. In the States, she’s just another ordinary housewife and mother. That is, until destiny and Simon Gardiner find her. Compelled to tease the male witch, she wants to abuse him and hurt him. He’s surly, dangerous, and sexy…everything her husband is not. She must show Simon she’s not her meek, subservient mother who’s slave to
Slanaitheoir
, the Mountain’s demon.

Orla can no longer deny the power coursing through her veins. Nor can she deny the powerful attraction she feels for Simon. Can she best him in this battle of wills and magic, or like
Slanaitheoir
has for generations of Devlin witches, will he take everything she cherishes from her?

Simon was a hard taskmaster. After his yoga class, I stayed behind and meditated. As she sometimes did, my dead grandmother Roisin appeared in my mind’s eye. Wrapped in her crimson robe, Roisin held out her hand to me, her green eyes anxious. Alight with electricity, my skin burned. Her mouth moved but I couldn’t understand her words. I shook my head. I’d meant what I said two years ago. I didn’t want the Devlin witches and their legacy of pain, of servitude, of death, to infect me.

A finger brushed my cheek. Simon knelt before me, his black gaze boring into my eyes. I opened my mouth to say something, but like Roisin, was unable to speak. He moved closer to me, our noses almost touching, while he inhaled my scent. A slight smile played across his lips.

He stepped away. “You have to leave now.”

“Of–of course.” I struggled to rise. He didn’t offer to help me, but only stood in the corner, amused by my awkwardness. I felt blood rush to my cheeks.

His black eyes were flat and gave away nothing. “Good. You have much to learn.”

As I watched the officers fish my mother’s broken bones from the Feale River, the only thought that ran through my head was,
I’m one of them
. Every oldest Devlin daughter since the time of the Famine had stood in this very spot and watched, powerless, while men dragged their mothers’ shattered bodies from the Feale.

I was now one of them.

My mother’s scarlet cape gleamed in the clear waters of the Feale, guiding the Garda like a beacon to my mother’s twisted limbs. “Look away,” my husband said. But I couldn’t. I’d looked away from my mother and her madness often enough. It was only right that I faced her one last time. I stood on the riverbank, my new summer sandals encased in muck, as Officer Murphy lifted her sad body from the river, her long black hair gleaming in the sun.

“Mother of God.” Declan crossed himself.

From some deep recesses of my mind, I recited in Irish the prayer my mother said at this very site the day they found my grandmother Roisin’s body.

You are Heaven’s own

I crossed myself and bowed my head.

Earlier in the week I’d tried to ignore Caroline’s frantic phone call, but something in my sister-in-law’s voice, her normally sharp New York voice, concerned me, although her story was all too familiar. My mother was raving. Again. Sleep wouldn’t come that night. Instead, dreams of my grandmother, Roisin. The aul bitch. Dressed in the Devlin red robe, she tormented me every time I drifted off to sleep.

“
Your mother needs you
,” she said in my dreams. “
Come. Come to Kilvarren before it’s too late. It’s your duty.
”

I opened my eyes for the twentieth time that night and, God help me, swore I saw the outline of a black-haired woman hovering at the end of the bed.

“Enough,” I said in a harsh whisper. “You win. We’ll leave in the morning.”

The apparition nodded and then disappeared, leaving me to my slumber.

As Declan drove us through the summer rain and our three sons squabbled in the back, I thought I’d face yet another one of my mother’s episodes. At worst, another trip for her to the county home. But nothing, absolutely nothing could have prepared me for crowds of people wandering Kilvarren’s streets, weeping. I saw my sister-in-law sprawled on the pavement outside of Collins’s Grocery, her face in her hands.

I jumped out of the car, leaving Declan and the boys behind.

“Caroline. What is it? What’s happened?” I grabbed her arm and dragged her to her feet.

I turned to face her. “What do you mean gone? Do you mean dead?”

My throat closed. I could only croak out, “How?”

Bridget sighed and pointed to the Mountain, Devlin’s Mountain, in the distance. “The usual way.”

Caroline, now that the worst had been said, found her voice. “I’m so sorry, Orla. But she was bad. I told you she was bad.”

Her pale, oh-so-earnest face made my blood boil. Jesus, what had my poor brother ever seen in this sad excuse for a woman? Before I could stop myself I slapped her, hard. “I told you to go home. If this is anyone’s fault, it’s yours.”

The outline of my hand blazed on Caroline’s cheek. Mouth hanging open, she looked too stunned to cry.

“Hush now, girls. The whole town is watching you.” Bridget enveloped me in her arms. She whispered in my ear. “It’s no one’s fault, love. ’Twas her fate. You know that. ’Twas only her fate.”

I pushed her away. “It may have been her fate but it sure as hell won’t be mine.”

The death of a Devlin woman was always a spectacle. Kilvarren town shut down for two days and the diaspora of the Mountain’s original five families, from Dublin, Galway, London, Toronto and New York, all found their way to the Mountain. To pay homage to the Mountain’s whore, the Devlin witch upon whose slight shoulders–according to legend anyway–lay the weight of the Five Families’ sins.

Although I wasn’t sure to what extent, if any, the younger generation bought into this nonsense. I’d been raised in Dublin and was a Dub through and through. To me, the old stories were just that, only stories. As far as I could tell they’d served solely as fodder for my mother’s madness, gave substance to her delusions. Those old stories and that godforsaken Mountain had a lot to answer for.

Every Kilvarren pub was full, in every house a party. Music filled the streets as the ritual waking for the Devlin witch overtook the small town. On the Mountain, too, a group of the aul ones gathered in the back field around a bonfire, chanting in the old tongue. Their lilting voices were carried by the soft summer breeze, through the fields and into my mother’s hot, cramped kitchen. I’d have shut the window if I hadn’t been sure we’d roast inside without some air.

So I sat at her scarred kitchen table and sorted through the reams of papers my mother had stuffed in battered shoe boxes. Electric bills, the deed to the cottage, my brother’s death notice all jumbled together. As her only surviving child it was my duty to sort through the detritus of my poor mad mother’s life.

Declan stole behind me and kissed the top of my head. “Are you sure you’ll be all right?”

I turned to him. The expression on his pale freckled face was full of concern.

“Yes, love. It’ll be easier for me to settle things here without that lot,” I said, pointing to our older two sons, seven and five, redheads like their father, who were wrestling in my mother’s sitting room.

“It doesn’t feel right, leaving you on your own.”

I helped him load the car and buckled the youngest, Niall, into his car seat. Everything important to me, my life, really, buckled into the battered red Opel. I kissed Declan through the open window. “Tell your mother I said thanks for looking after the kids.”

I waved to my little family as they bounced down the rutted drive, back to civilization and away from this accursed Mountain.

The chanting reached a fevered pitch and I could see the black smoke from the bonfire in the distance. According to legend, all the dead Devlin witches, or ‘martyrs’ as the locals called them, would walk the Mountain tonight. The chanting, the parties were in homage to those dear departed woman who’d given their lives in service to
Slanaitheoir
, the Mountain god. Or Mountain demon, as some would say.

Personally, I thought it was an excuse for the now far-flung Mountain families to come home and get drunk, but I didn’t say that to anyone. I’d offended enough of them when I’d refused to participate in their chanting party in the back field. And some thought it was my duty, as the next Devlin woman in line, to abandon my life in Dublin and live in this hole. One old crow stopped me in Collins’s Grocery yesterday and asked me who was to save them now, if I didn’t come back to the Mountain and take my mother’s place. “You’ll have to save yourselves,” I told her, as Caroline’s aunt, Dottie Collins, looked on, her pale blue eyes the size of saucers.

And what of my dear sister-in-law? True to form, she’d cleared out of here as soon as there was any real work to be done. “I’m here for you. Let me know if you need anything,” she’d said.
I’m here for you.
What does that even mean?
I’m here for you.
Only a Yank would say something so stupid. So meaningless.

Get off your arse and clean out a press. Or box up the dishes. Or sort through one hundred and fifty years of papers, books, clothes.
I’m here for you.
Please.

But, as Bridget Griffin told me, poor Caroline’s in the family way, pregnant by Bridget’s young son. How that pale wren of a woman found not one handsome man, but two, is beyond me. I knew I wasn’t much to look at, but for God’s sake, Caroline with her simpering and her poor-me sighs... Who’d sign up for a lifetime of that? She’d do your head in.

Ah, it’d be easier to sort through this mess on my own anyway. I filled the kettle and looked out the back window. The late evening sun lit up my mother’s garden. The primrose, the foxglove, all gleamed. In the right light, this was a beautiful spot. I can see why my mother missed it when she lived in Dublin. Beyond the garden gate stood the old goat, the
pucan
, that had wandered the Mountain for as long as I could remember. The
pucan
that somehow managed to outlive my grandmother and mother both. But it couldn’t possibly be the same goat. It must be the son of a son of a son. This one, with its gleaming black eyes, looked young and bold as it stared into my window.

“Always salute the
pucan
and then look away,” my grandmother Roisin told me on one of my infrequent childhood visits to the Mountain. Salute him? Fuck that. I smiled, gave the goat the finger and then went back to making tea.

Sweaty and covered with newsprint, I stripped and took a hot shower. The only improvement my mother made to the old cottage was installing an electric shower. The almost scalding water felt good against my tight shoulders.

I dried myself with a threadbare towel that smelled slightly of mildew and then slipped on a soft nightdress. The strangeness I’d originally felt at sleeping in my dead mother’s bed had by now worn off. It was the only decent bed in the house and I was tired, too exhausted to feel squeamish.