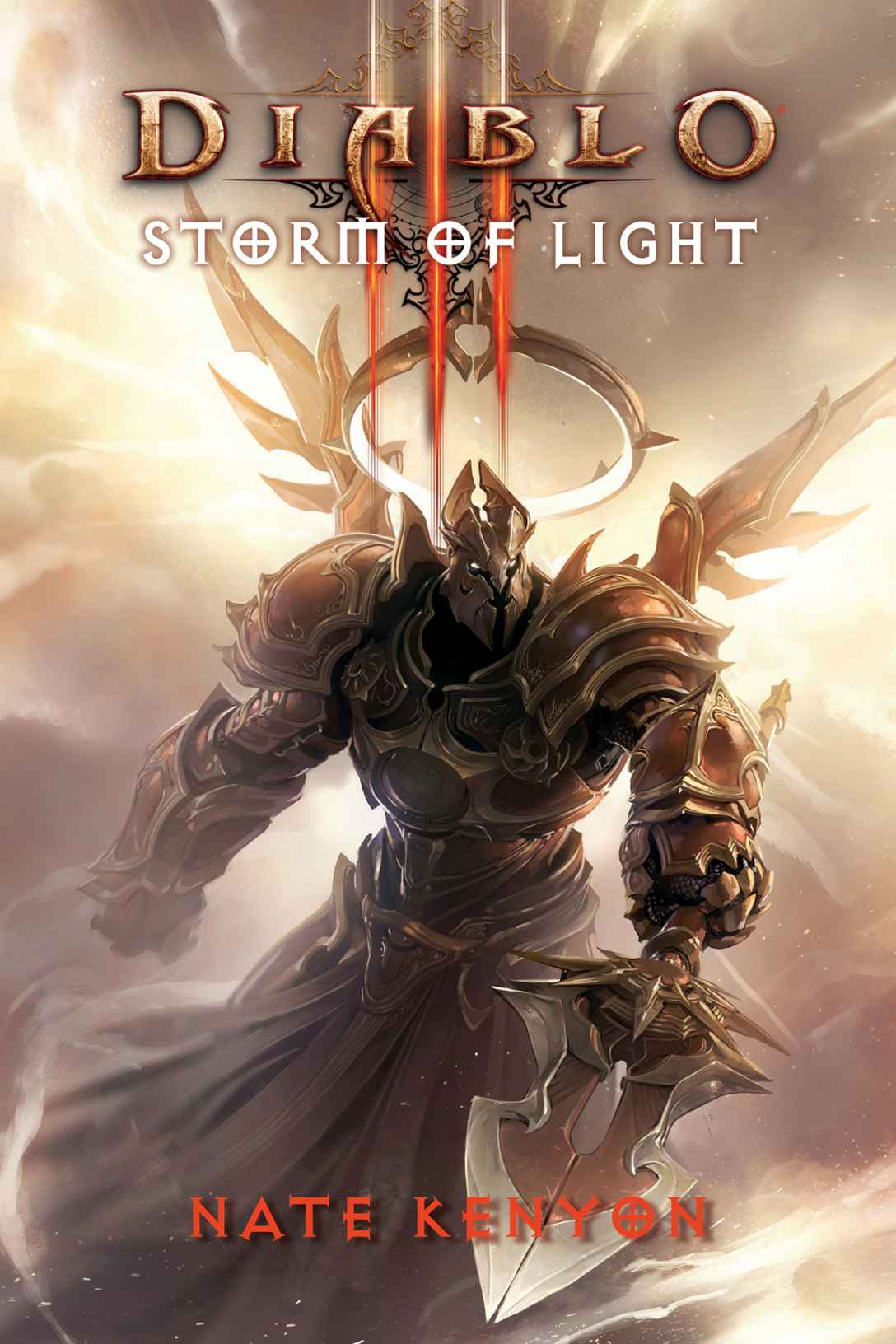 Since the dawn of time, the forces of darkness and light have remained locked in eternal conflict
.

Our battles have raged throughout the centuries like flames erupting from smoldering embers. Whenever the angels have struck down the darkness, it has risen again, stronger than before. And yet each time, the keepers of the light and the rulers of the High Heavens have claimed ultimate victory
.

At the End of Days, our foolish pride made us blind. In the guise of a child, Diablo rose up from the ashes, climbing through Sanctuary to shatter the Diamond Gates. And truly, success was close at hand, for the Crystal Arch, the source of angelic power, was within the grasp of the Prime Evil
.

One mortal soul stood against the destruction of two worlds. The nephalem’s great courage gave strength to us all, turned the tide of fate, and led to the fall of Diablo and the salvation of Sanctuary and the High Heavens themselves
.

But darkness does not fade so easily. Once more, our victory has been claimed far too soon
.

The Prime Evil has been struck down
.

But there are other forces that would move against the world of men
.

A falcon in flight might have viewed it as a series of silver-tipped mountain peaks rising up through the mist, the scope of them too breathtaking for any mere human to grasp. At its center rose a structure taller than the rest, a shining tower topped with a multifaceted arch that shimmered like cut diamonds. The light of the Heavens kissed these gleaming skins, set fire to them so that the entire vast tableau glowed like outstretched wings, spires reaching ever skyward as glittering crystal threw sparks to warm the darkness.

In the world of angels
, the archangel of Wisdom had recently come to realize,
there are no beds
.

Bleary-eyed and worn, Tyrael looked up from where his quill lay across the parchment as warmth and light washed through soaring arch and buttress, breathing life into the immense open space around him. He’d had no use for sleep until his mortal soul had taken up residence within his breast. Now the constant light that infused the Heavens confused his newfound internal rhythms, and he longed to lay his head on a gentler surface than the stone floor of these chambers. But he had yet to summon something more comfortable. The shedding of his wings had already given his brethren enough cause to look for any sign of weakness. He would not hand them another.

Tyrael flexed his cramped fingers. He had been taking his own notes on Deckard’s heavy scrawl, but there would be no more work done tonight, in spite of his unspoken promise to Deckard and Leah to finish what they had begun. And yet he could not bring himself to close his eyes.
Not yet
. There was much to consider beyond his own mortal failings. His growing
rift with Imperius and the Council, for one. The role of men in controlling their destinies. The fate of Sanctuary itself.

And above all else, what to do about the thing that resided among them, seemingly silent and still as its tendrils crept like blackened pitch across sacred ground.

The archangel left his solitary chambers and walked through the lonely rooms and corridors that lined the Courts of Justice and the Ring of Judgment, his footsteps echoing on endless planes of polished stone. His mortal senses had difficulty accepting his surroundings. He had resided here for countless millennia, and yet he saw it differently now. Each space opened to one larger and more stunning than the one before; pointed arches and intricate, ribbed vaults soared far overhead; clustered columns ran through infinity; light burst forth at random from countless crystal facets that shifted and changed colors at will.

When the angels were present, their song resonated along with the Arch in a perfect harmony of light and sound. But Justice was empty now, its vast courts, benches, and seating vacant and cold, and the music of the Heavens was soft and subdued.

The archangel felt an odd ache in his breast, a longing for things left behind. Although angels still brought their grievances here, Tyrael’s former home had remained largely unoccupied since his transformation. The Luminarei, Defenders of the Arch, had taken up residence with Imperius in the Halls of Valor.

I should remove myself from this place
, he thought.
It is an echo of my former self, one that shall never return
. And yet he could not. Since Malthael’s disappearance, Wisdom’s domain had also fallen silent, and the Angiris Council suffered for it. Tyrael had meant to assume those duties and act as a guiding hand during the most challenging decisions the Council would face. But the pools that spilled through that realm seemed alien to him, unsettling, and Chalad’ar called with a song he dared not answer.
The legendary chalice required abilities that he was no longer sure he possessed.

He felt an ache in his back, a twinge in his knee. His physical form was already breaking down, the slow decline toward the grave that all mortals must face. He knew in his heart that the choice he made was the right one.
And yet you still doubt yourself
.

What did it mean for an archangel to be so fragile? How could he fight back the darkness if his new body was so vulnerable to attack? Would he have been better prepared to face the challenges that were coming if he had not made that choice?

The Courts of Justice had given way to an atrium that curved far above his head. Through another arch, a platform made of crystal and stone and carved with intricate, flowing designs stretched before him. The Angiris Council chamber. Tyrael was faced with the thrones from which the archangels made their arguments. The chamber was empty, and the light that had streamed through the arching windows earlier was curiously absent here.

The Black Soulstone sat on its pedestal as if awaiting his arrival.

The stone’s sharp facets and points thrust up from the base like a blackened claw. It was barely larger than a man’s skull. How could a thing like this hold such terrible darkness?

Tyrael approached slowly, both fascinated and repelled by the stone’s power. An unfamiliar chill ran through him, a mortal shell’s warning. The bloody light that shone from the Black Soulstone had been extinguished after Diablo fell and the stone was retrieved from a lower realm of the Heavens. But as Tyrael moved closer, he thought he saw the faintest glint from within.

The archangel had reached out a hand toward the stone. He quickly withdrew it and turned toward the voice.

Balzael stood beneath the arch that led to the chamber, his
impressive form partially hidden in shadow. The right hand of Imperius. The Luminarei warrior stepped out onto the platform and unfurled his magnificent wings, tendrils of light snapping up toward the chamber roof. Balzael’s armor was golden, the breastplate marked with the symbols of his rank.

“What is Wisdom doing here alone?”

Had Tyrael sensed the slightest mocking tone in the use of his new title? “Do not question me, Balzael. I go where I please. Has Imperius sent you to spy on me?”

“I guard the stone,” Balzael said. “That is the task given to me, above all else.”

“Those are not the only orders the archangel of Valor has for you, are they? He does not trust his brother?”

Tyrael’s heart beat faster at the warrior’s impudence. The implication was clear: Balzael had wings; Tyrael did not and was the lesser for it. “And angels’ pride blinds them to their fate,” the archangel said. “I commanded you not long ago. Do you forget this so soon?”

Instead of backing down, Balzael moved closer. “You taught me well enough to know when to be suspicious.”

Balzael made the slightest move toward his sword, barely enough to be noticeable. But the statement it made was clear. Anger washed over Tyrael at the brazen challenge, and he stepped forward, too, standing tall, his fingers itching to grasp El’druin where it hung at his side. At the same time, he was aware of his limits. Although skilled in battle, Tyrael was not as strong as he had been as an immortal.

For a moment, Tyrael believed Balzael might draw the weapon. Then a glow of light manifested at the entrance to the chamber. The archangel of Hope appeared before them, sweeping forward and seeming to assess the situation in an instant. “Leave here,” she said to Balzael. “We will be meeting soon.”

“I have not received notice of such a—”