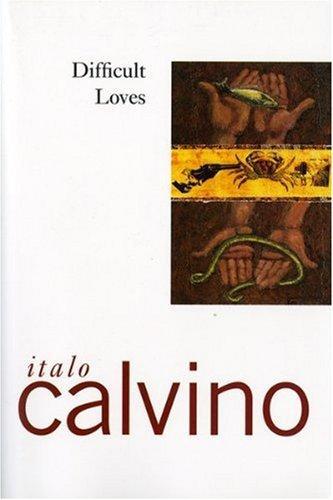 Translated from the Italian by

The Adventure of a Photographer    220

The Adventure of a Nearsighted Man    272

The new gardener's boy had long hair kept in place by a piece of cloth tied around his head with a little bow. He was walking along the path with his watering can filled to the brim and his other arm stretched out to balance the load. Slowly, carefully, he watered the nasturtiums as if pouring out coffee and milk, until the earth at the foot of each plant dissolved into a soft black patch; when it was large and moist enough he lifted the watering can and passed on to the next plant. Maria-nunziata was watching him from the kitchen window, and thinking what a nice calm job gardening must be. He was a young man, she noticed, though he still wore shorts and that long hair made him look like a girl. She stopped washing the dishes and tapped on the window.

The gardener's boy raised his head, saw Maria-nunziata, and smiled. She laughed back at him, partly because she had never seen a boy with such long hair and a bow like that on his head. The gardener's boy beckoned to her with one hand, and Maria-nunziata went on laughing at the funny gesture he'd made, and began gesturing back to explain that she had the dishes to

wash. But the boy beckoned again, and pointed at the pots of dahlias with his other hand. Why was he pointing at those dahlias? Maria-nunziata opened the window and stuck her head out.

"What's up?" she asked, and began laughing again.

"D'you want to see something nice?"

"Something nice. Come and see. Quickly."

"I'll give it to you. I'll give you something very nice."

"But I've got the dishes to wash, and the signora'll come along and not find me."

"Wait a second," said Maria-nunziata, and shut the window.

When she came out through the kitchen door the gardener's boy was still there, watering the nasturtiums.

Maria-nunziata seemed taller than she was because of her high-heeled shoes, which were awful to work in, but she loved wearing them. Her little face looked like a child's amid its mass of black curls, and her legs were thin and childlike, too, though her body, under the folds of her apron, was already round and ripe. She was always laughing: either at what others or she herself said.

"Hello," said the gardener's boy. The skin on his face, neck, and chest was dark brown, perhaps because he was always half naked, as now.

"Esperanto," said Maria-nunziata. "Are you Esperanto?"

"Maria-nunziata," she said and laughed.

"Why are you always laughing?"

"Why are you called Esperanto?"

"Why are you called Maria-nunziata?"

"It is the Madonna's name. I'm named after the Madonna, and my brother after Saint Joseph."

"My brother," said Libereso, "is named 'Germinal' and my sister 'Omnia.' "

"That nice thing you mentioned," said Maria-nunziata, "show it to me."

"Come on, then," said Libereso. He put down the watering can and took her by the hand.

Maria-nunziata hesitated. "Tell me what it is first."

'Yes, I'll give it to you." He had led her to a corner of the garden wall. There the dahlias standing in pots were as tall as the two of them.

Maria-nunziata peeped over his shoulder. Libereso bent down to move a pot, lifted another by the wall, and pointed to the ground.

"What is it?" asked Maria-nunziata. She could not see anything; the corner was in shadow, full of wet leaves and garden mold.

"Look, it's moving," said the boy. Then she saw something that looked like a moving stone or leaf, something wet, with eyes and feet; a toad.

Maria-nunziata went skipping away among the dahlias in her high-heeled shoes. Libereso squatted down by the toad and laughed, showing the white teeth in the middle of his brown face.

"Of course it's a toad. Come here," said Libereso.

She pointed at it with a trembling finger. "Kill it."

"All toads are nice. They eat the worms."

"Oh!" said Maria-nunziata, but she did not come any nearer. She was chewing the edge of her apron and trying to watch out of the corners of her eyes.

"Look how pretty it is," said Libereso and put a hand on it.

Maria-nunziata approached, no longer laughing, and looked on, open-mouthed. "No! No! Don't touch it!"

With one finger Libereso was stroking the toad's gray-green back, which was covered with slimy warts.

"Are you mad? Don't you know they burn when you touch them, and make your hand swell up?"

The boy showed her his big brown hands, the palms covered with a layer of yellow calluses.

Now he'd taken the toad by the scruff of the neck like a cat and put it in the palm of his hand. Maria-nunziata, still chewing the edge of her apron, came nearer and crouched down beside him.

They were both crouching down behind the dahlias, and Maria-nunziata's rosy knees were grazing the brown, scratched ones of Libereso. Libereso cupped his other hand over the back of the toad, and caught it every now and again as it tried to slip out.

"You stroke it, Maria-nunziata," he said.

The girl hid her hands in her apron.

Maria-nunziata lowered her eyes, glanced at the toad, and lowered them again quickly.

Maria-nunziata's eyes clouded over. It was sad to refuse a present—no one ever gave her presents—but the toad really did revolt her.

"You can take it home if you like. It'll keep you company."

Libereso put the toad back on the ground, and it quickly hopped away and squatted under the leaves.

"But I must go and finish washing the dishes. The signora doesn't like me to come out in the garden."

"Wait. I want to give you something. Something really nice. Come with me."

She began following him along the gravel paths. What a strange boy this Libereso was, with that long hair, and picking up toads in his hands.

"How old are you, Libereso?"

"Now, or on your next birthday?"

"On my next birthday. Assumption Day."

"Has that passed yet?"

"What, don't you know when Assumption Day is?" She began laughing.

"Back home there are lovely processions. It's not like here, back home. There are big fields full of bergamots, nothing but bergamote, and everyone picks bergamots from morning till night. I've got fourteen brothers and sisters and they all pick bergamots; five died when they were babies, and then my mother got tetanus, and we were in a train for a week to go to Uncle Carmelo's, and eight of us all slept in a garage there. Tell me, why do you have such long hair?"

"Because it grows like that. You've got long hair, too."

"Would you like me to give you something nice?"

Libereso began moving among the arum lilies, budding white trumpets silhouetted against the sky. Libereso looked into each, groped around with two fingers, and then hid something in his fist. Maria-nunziata had not gone into the flower bed, and was watching him, with silent laughter. What was he up to now? When Libereso had looked into all the lilies, he came up to her, holding one hand over the other.

"Open your hands," he said. Maria-nunziata cupped her hands but was afraid to put them under his.

"What have you got in there?"

Libereso opened his hands and let her look inside. His palm was full of multicolored rose chafers, red and black and even purple ones, but the green were the prettiest. They were buzzing and slithering over one another and waving little black legs in the air. Maria-nunziata hid her hands under her apron.

"When you hold them tight they tickle; would you like to feel?"

Maria-nunziata held out her hands timidly, and Libereso poured a cascade of rose chafers of every color into them.

"Don't be frightened; they won't bite you."

"Mammamia!"
It hadn't occurred to her that they might bite her. She opened her hands and the rose chafers spread their wings and the beautiful colors vanished and there was nothing to be seen but a swarm of black insects flying about and settling.

"What a pity. I try to give you a present and you don't want it."

"I must go wash the dishes. The signora will be cross if she can't find me."

"Don't you want a present?"

"What are you going to give me now?"

He took her hand again and led her through the flower beds.

"I must get back to the kitchen soon, Libereso. There's a chicken to pluck, too."

"We don't eat the flesh of dead birds or animals."

"Why, are you always in Lent?"

"Oh, all sorts of things, artichokes, lettuce, tomatoes. My father doesn't like us to eat the flesh of dead animals. Or coffee or sugar, either."

"What d'you do with your sugar ration, then?"

"Sell it on the black market."

They had reached some climbing plants, starred all over with red flowers.

"What lovely flowers," said Maria-nunziata. "D'you ever pick them?"

"This plant's called Mesembryanthemum in Latin. All flowers have Latin names."

"I wouldn't know about that."

Libereso was now peering closely between the winding branches on the wall.

It was a lizard, green with black markings, basking in the sun.

But he inched toward the lizard, very slowly, with both hands open; a jump, and he'd caught it. He laughed happily, showing his white teeth. "Look out, it's escaping!" First a stunned-looking head, then a tail, slithered out between his closed fingers. Maria-nunziata was laughing, too, but every time she saw the lizard she skipped back and pulled her skirt tight about her knees.