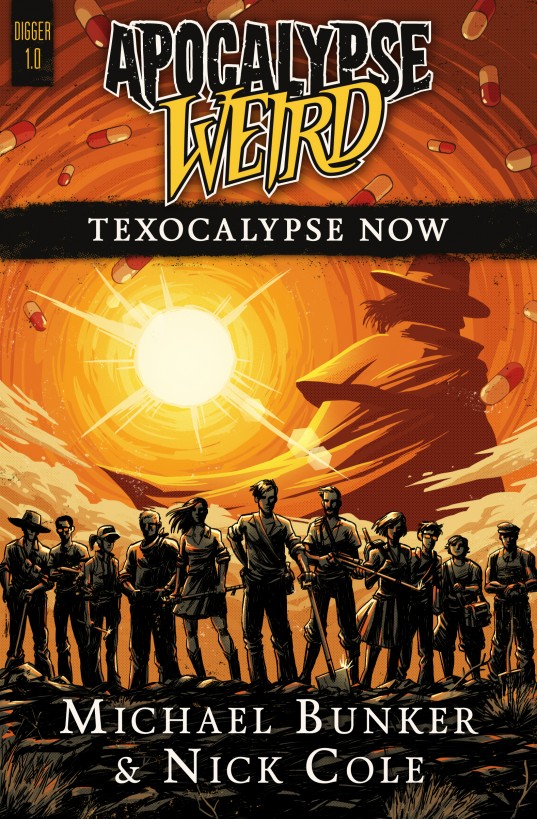 All rights reserved.
No portion of this book may be reproduced in any form, except for
brief quotations in reviews, without the written permission of the
author.

For information on Michael
Bunker or to read his blog, visit:
http://www.michaelbunker.com

For information on Nick
Cole or to read his blog, visit:
http://www.nickcolebooks.com

For information about
Apocalypse Weird:
http://apocalypseweird.com

Apocalypse Weird is owned
and operated by Wonderment Media Corporation

To everyone who works hard
to reflect light,

Some dates drill through your skull
permanent-like. They eat through skin and bone and gray matter
until they’re imprinted in the memory like the saddest and most
heart sick tidings ever carved in granite. September
22
nd
was one of those dates.

It was THE date. The one day, month, and
year combination that no one who was alive then, would ever forget.
Bigger than December 7, 1941. Bigger than D-Day. Bigger than
11/22/63. Bigger than 9/11. A million times bigger. Because that
was the day when the whole world went... completely blind. Except
for at least one lady who finally saw the world for what it
actually was.

Not partial blindness, like maybe a curtain
was drawn down over the sun. Not like the whole world got dipped in
raven shadows. Or like the power went out on a moonless night. For
Ellis, and for everyone else he’d ever spoken to about it, it was
like every bit of light that ever existed in the whole world, from
“let there be light” to that crystalline moment in September, well,
it was just extinguished and swallowed up in utter blackness.

The blindness was palpable. Distilled, evil,
stygian
darkness, and
heavy on the skin. Like one’s funereal duds, only tighter and made
of spandex, or hell’s essence except darker than the mind could
conjure. Even Ellis’s memories were dark. In that moment, no light
illuminated his thoughts. It was like he forgot that light had ever
been, or that the gift of sight had been his since the day he
breached the womb.

In the distance, a woman cried out in a
city; a city that would soon be filled with pleas, groans, weeping,
gnashing of teeth, and yes even cries for help. But her cry was
unique. It was the first.

Blind from birth, she’d said, but at that
moment she could see. She let everyone know. It was Dallas, Texas
and Ellis Kint was seventeen. Skipping school to skateboard at the
museum downtown when the blindness fell, and this woman was not
twenty yards from him as far as he could remember. Mere seconds had
passed since the dark descended.

Then he heard the crunch of a friend who’d
been in mid-stunt, halfway down the handrail and he hit hard. But
the dark in Ellis’s mind and the wailing of the woman who could see
drowned out his friend’s protruding bone fracture screams.

And there was no light. Just...

Ellis sat down. It was a reflex action. He
can’t remember thinking about it now. He halfway thought to look
around wildly for light, but the thought died on its way to being
born and his head just dropped to his chest and he listened for
anything.

He learned over the next hour that she never
struggled to see, like patients do when their sight is returned.
She didn’t start with shadows and blurry colors. Her sight came
back full-on, and though she’d been blind since birth, she knew and
understood what she saw for the first time. She explained this in
tears and sobs. She described the horror as it happened. Moment by
moment.

Ellis sat. Sounds came at him in waves. Fear
gripped his heart like an animal’s claws. He heard the loud squeal
and Doppler Effect as a plane, probably intent on landing at Dallas
Love Field, screamed urgently and exploded violently.

This time Ellis looked up, the faint thought
that maybe there would be flames on the horizon, but there were
none that could be seen.

Do flames exist if you can’t see them?

There was a connection with 11/22/63.
The day Kennedy was killed in Dallas. Not far from where he sat.
Didn’t Kennedy land at Love Field? Hadn’t the world changed then
too?

And people ran by, stumbling, falling,
breaking bones that, in the un-medicated days, months, and years
that would follow, they’d wish they’d never had. He heard the
crunch of bones and the ripping of flesh as humans careened off of
things or collapsed at full speed into the ground.

Just sit down, Ellis thought at each passing
disaster.

And there was a moment, a long horrible
moment when one knew that they could easily be a part of the next
disaster regardless of whether they participated or not. It was
like swimming in the dark with a shark you couldn’t see.

Ellis heard it all as he waited to be
next.

He sat because he could do nothing else.
Fear gripped him like ice on a pond. Complete and seemingly without
end. That is the power of fear.

The woman pleaded on and on. Chattering.

She talked nonsense too. She spoke of
tentacles and the arms of beasts. She said she looked upward and
saw sounds as colors resonating through the sky. Strings like
cables tangled together, like time trapped in a snare. In a ball.
In a knot.

But for Ellis there was only blackness and
the grip of an evil that whispered the words “nothing else” over
and over again.

Maybe we
’re all mad?

Maybe this is Hell?

Ellis tried to think of his father, of his
home. His dad was the only family he knew now. He tried to think
about his father, a pilot for American flying out of DFW who was in
the sky somewhere, probably near Kansas City, but that thought lay
paralyzed in his mind, and he couldn’t even see it because of the
blackness that sucked at and buried everything else.

That thought made it through the cloud in
his brain. Reckon they’re all dead. His dad. His brother and
mother, wherever they were. Wherever they’ve been since they ran
off. He didn’t even remember them much. But, reckon them dead too.
Because... the world’s just changed forever. Don’t worry about who
you’ll see again ‘cause you’ll never see again, kid. Period.

Then the woman… “Lord, there’s blood. So
much blood!”
She sobbed.
“Why isn’t anyone coming to help us? Why are you just sitting
there?”

Later he would know that was when the bodies
started to rain down from above. They splattered across the
pavement at irregular intervals. Hopeless people jumping through
windows. Not knowing where they were. Maybe just hoping for death
and the nothing they’d been promised. Hoping for senseless
darkness, which perhaps they figured had to be better than evil,
endless night.

Walker kept the convoy moving forward.
They’d survived the rocky hills and winding passes west of their
position, bartering their way past a fortified overpass, and now
the big stretch of the Texas Badlands lay before them in the golden
light of morning.

Better times ahead
, thought Walker,
even though he didn’t believe himself. He climbed down from the
observation hatch they’d built on top of the old bus. The massive
push-pull diesel engine rattled away loudly beneath his feet and it
didn’t sound any more dire than it always sounded. The shooters
inside the bus cast a quick glance at him, checking his face to see
if he’d spotted trouble ahead. He shook his head and they returned
to their shooter’s nests, the sunlight coming in through slats in
the makeshift armored shutters. They would make Hagersville by dark
at this speed, crawling, ten miles per hour, over the forty miles
of rent and cracked county road.

Walker crouched down near his pack, the last
surviving piece of issue gear that remained of his time in the Big
Red One out of Fort Riley Kansas. He pulled out a dented big box
store thermos they’d looted and took a long pull, tasting the clear
sweet water from the last good spring.

We should’ve stayed and done something with
that, he said to himself for the thousandth time. But the city that
no one could find on a map, a large town really, had been dosed.
Attacked with chemical weapons. In their post-Beginning lexicon,
they said a town like that had been “chemmed”. If anything had ever
been “chemmed” then it was bad forever as long as anyone was
concerned. Even if it tested good, no one would drink from it. The
nearby town with no name had been poisoned and made dead in one
night, probably. Just like Austin back in the early days when there
were still news outlets to let you know how bad everything was
getting. Now you just assumed it was all bad and getting worse by
the day.

None of the other survivors had wanted to
stay near the spring in the midst of the silent, haunted buildings
of that lost city. So they’d topped off on water and moved on.
There were rumors about West Texas ahead.

Rumors
, Walker thought. In his mind
he spat out the word. His life was now driven by rumors. He walked
to the back of the bus and tried to push the rumors of the Texas
Coast and abandoned boats and the tropical paradises they’d been
promised far from his mind.

It was all rumors, and it didn’t seem like
they could all be true. California was a zombified wasteland
crawling with unheard of beasts. Nevada and Utah were almost as
bad. Was any of it true? Not all of it could be. Montana had died
from some kind of Bio-Engineered blight. Washington and Oregon and
probably most of the Western Coast of Canada on up into Alaska had
been “chemmed” or were destroyed by earthquakes or meteors or
aliens. The story always depended on who you were listening to and
how sane they might still be. And Arizona. Arizona was just plain
crazy.

Which made New Mexico…
thought Walker
with an audible sigh of remembrance that none of the others
detected over the rattling of the bus.
That made New Mexico
simply worse by orders of magnitude.
Going west again would be
foolish, but only slightly more foolish than going in any other
direction.

So, maybe the Texas gulf coast is the place.
Maybe it’s the paradise some people said it is.

But he didn’t have high hopes. He hadn’t had
those in a long time. All Walker had was the convoy and the other
survivors who’d chosen to follow him.

Their little armored procession could outrun
hordes. What else could you do when you ran across an endless sea
of craven, cannibalistic survivors? You run. And you’d better do it
faster than the hordes can move. The hordes were little more than
mindless locusts who’d start consuming each other when there wasn’t
someone else’s stuff to be had.

The armed towns and gangs they occasionally
found, his people were more than a match for. They’d always had
plenty of weapons and lots of ammo. Walker and the few vets he had
on his team had trained everyone to be a shooter. The worst of them
was better than most they met.