Read Dinner and a Movie Online

Dinner and a Movie 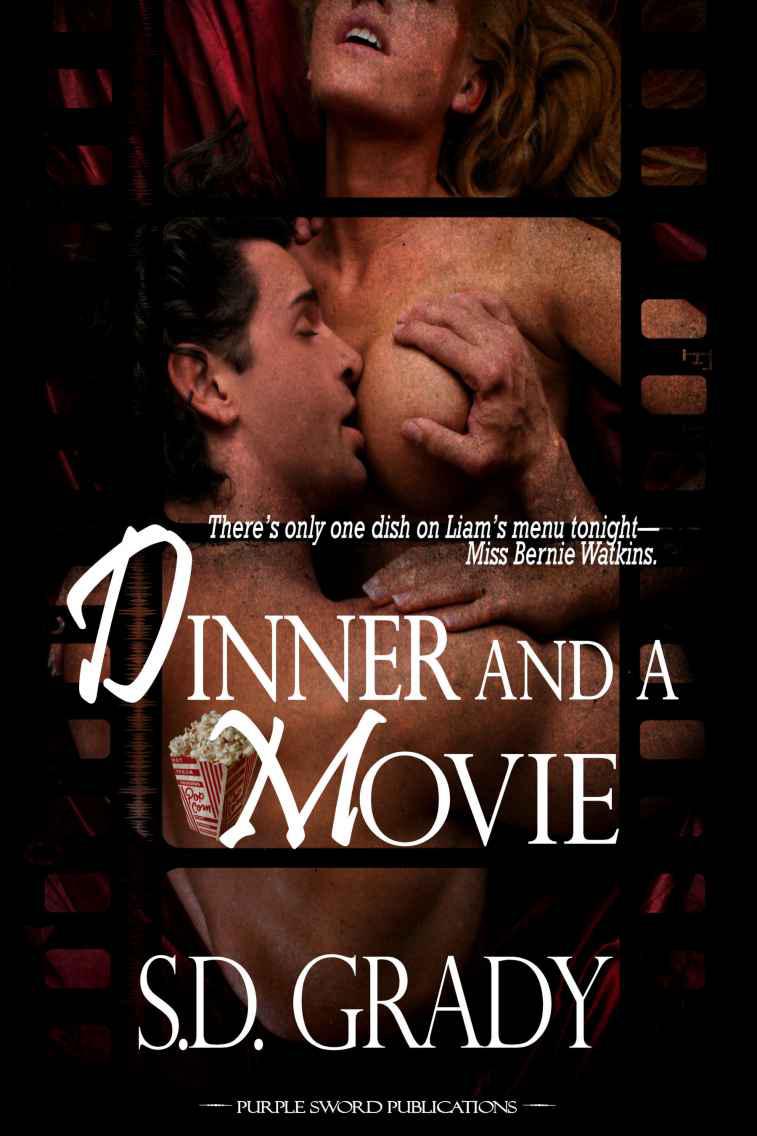 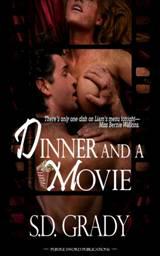 Dinner and a Movie

This is a work of fiction. Names, places, characters, and events are fictitious in every regard. Any
similarities to actual events and persons, living or dead, is
purely coincidental. Any trademarks, service marks, product names, or named features are assumed to be the property of their respective owners, and are used only for reference. There is no implied endorsement if any of these terms are used. Except for review purposes, the reproduction of this book in whole or part, electronically or mechanically, constitutes a copyright violation.

DINNER AND A MOVIE

Liam rolled to a stop right behind the shiny, fat ass of a 2010 Chevy
Camaro
. Under the amber glow of the city, the maroon paint glistened. The taillights dulled as it pulled away when the light changed. Damn, he always wanted one of those—some hot little sports car, with a motor able to leave anybody in the dust. He revved his pale blue Volvo and grimaced. Maybe he didn’t drive a muscle car, but he could still dream.

He pulled up by the
Camaro
at the next light. The blue circles of the dash glowed from the interior. The dark shadow of the driver, a woman, swayed back and forth. She flipped her hair in time to the music…his music, he realized. He spun the knob on his radio and let the thump and
twang of Brad Paisley take
the fantasy to the next level, her shoulders continuing to move with the rhythm.

In his mind she would be tall, slim with plump cherry red lips. There would be no talking, just hard, fast sex on the hood of her car. Five inch heels and a tight leather skirt wouldn’t hurt, either.

He shifted in his seat, adjusting his cock, until the magic popped in his brain. Who was he fooling? The driver wouldn’t be his dream girl. She would take a look at his athletic, 6’2” build, conservative haircut,
tasteful
suit of pin-striped black and peg him for money and her next sugar daddy. He loosened his grip on the wheel and sighed.

Stifled, he rolled down his windows. The warm, summer breeze wafted into the car. He checked his mirrors and paused when he noticed five long fingers with nicely manicured nails flick a butt out the window of the
Camaro
.
Slim and sexy…damn.

Her elbow rested on the door while she played with curly, red-brown locks. A pretty chin, he allowed. And even from here he could see the generous swell of her breasts. She was tall and full of curves. Perhaps not so far from that dream girl, after all.

The song ended and segued into something slow and
mournful
.

She checked her mirror, giving Liam a better view of full cheeks and long lashes.
Eye color?
He chuckled. Why would he need to know? They were stopped at a light, it would change, and they would drive off into the sunset.

She tossed her hair over her shoulder and caught his gaze. Liam smiled and so did she. Then she laughed. The phantom sound floated over the rumble of their engines and tore right through him; a deep, throaty chuckle. She
pursed
her lips, kissed her hand, and tossed it his way.

The light changed to green. Liam sat in the dust. Her taillights vanished in the late evening traffic.

Bernie stepped from her
Camaro
, clutching her white pocketbook and pulled down on the hem of her brown leather mini-skirt. She had to wiggle a bit to settle the loose-fitting white and rhinestone silk blouse on her shoulders. If she twitched too far one way, it slipped down her shoulder, pull it in the other direction and the deep valley of her cleavage screamed an invitation for men to dive into. She preferred something in between—a little tease, but not the whole plate on the buffet. Tonight was girl’s night out. First dinner here at
Fredo’s
, followed by dancing at
Dusty’s
Tavern.
If she picked up a date along the way, great.
If not, she’d survive. She always did.

She tripped over a shallow pothole in the middle of the lot, stopped and reached down to pull the buckle tight on her ankle-high boots, with pointy toes and low heels—she left the cowgirl hat in the back seat. Her stomach growled. Her friend, Sheila, had been waiting almost an hour inside.

Irritated and late, Bernie flipped the driver off as she trotted toward the entrance. “Oh shit.” She stalled once again to open her pocketbook and peer inside.

The horn honked again. A guy yelled, “Hey! Move it!”

Damn.
She’d left her wallet in the console. She turned to walk back to her car and stopped when she realized the pissed off driver sat behind the wheel of a pale blue Volvo—the one from the stoplight. She laughed, waved and blew the guy a kiss, again. She wondered if he recognized her without the
Camaro
.
Probably not.
They never did. She frowned as she hit the remote to unlock the door. She was too tall, too buxom, too wild, too…just too. She tried to diet, but it never did any good. Dad was 6’6’ and Mom a healthy 5’11’’. There was no way in hell Bernie Watkins would ever be anything but the woman no man wanted.

No shit.
Liam watched her bend over to reach into the console, the full globes of her ass strained against the leather of her skirt. He hissed with appreciation, and then released it in a low whistle.
Jesus, look at those legs.
A mile long.
The hem of her skirt picked up the shadows cast by the parking lot lighting. She stood up on her toes a bit as she rummaged…

Liam chuckled.
Yep.
First pissed off at the idiot female fixing her clothes in the middle of the parking lot and now he was trapped by his body’s reaction to…his brain kept returning to the possibilities hidden by that skirt.
A thong?
Maybe some lacy hipsters.
Or better yet….nothing to hide that pretty pussy from his hungry gaze and hands.

The driver really laid into it this time. Liam pulled into a space three down from the
Camaro
and hustled to get out. He wanted to talk to her. Heck, it wasn’t every day you bumped into your dream girl, or at least the physical version of her. Maybe he could catch her before she got into the restaurant.

She scurried now, clearly in a hurry—probably to meet a date, he figured. The door to the restaurant began to swing shut. He ran to grab it just before it closed on her. Even if she was meeting somebody else, this compulsion urged him on. He must speak to her. Would her voice be low and gravelly?
Or sweet, soft…
He shook his head. Already the echo of her cries in the throes of passion rattled around his mind. What kind of creep did this make him? She drove a hot car and lived in a body that cried for sin and she probably didn’t want him pestering her for her name.

She stood at the reception desk, pointing into the dim environs of the dining room. Her shirt slipped down her shoulder to expose creamy skin. The host nodded and started to lead her down the steps into the dining area.

“
Uhh
…” His voice shook. Liam cleared his throat and tried again. “Excuse me.”

The girl and the host paused, turned to him and waited.

For the barest instant, he fought the urge to stare at his toes. But something in her dark brown eyes drew him up to his full height. “I hoped I could speak to you for a moment?” There. That didn’t sound too awkward.

The host looked back and forth between him and the girl and returned to his desk. She waited, with her head up and a firmed jaw. She probably figured he wanted to chew her out for holding traffic up.

Liam stopped at the top of the stairs; she stood on the one just below. Even so, her head came to the middle of his chest. He grinned. Her scent, something spicy and unique, wrapped its way around his mind. The usual greetings stumbled over one another and stuck in his throat. After a few attempts he shrugged, smiled and asked, “Can I talk to you?”

She narrowed her eyes. “You just asked that.”

Ah, yeah, he did. “Well, more like over there.” He pointed toward the small hallway that led to the restrooms.

She peered into the shadows, sized him up and then shook her head. “If you
wanna
call me a bitch for tripping in the parking lot, go ahead.”

Just like that. Blunt.
In your face.
Her challenge pumped up his heartbeat another notch, and also his cock. Damn, but she really revved his engine. Unable to suppress the impulse, he ran his finger up her arm, and reveled in victory as she shivered. “I’d rather do it in private, if you wouldn’t mind.”

Bernie’s mouth went dry. Bumps broke out across her skin. She took a breath, but it caught in the back of her throat. She cast a quick glance at the shadowed hall. It beckoned to her.

Are you an idiot? Can’t you see his hard-on? He’s some kind of
perv
.

Her nipples tightened against the silk of her lacy bra. What kind of perverted things would he want?

She backed down one more step and checked who might be witnessing the tall guy’s advance. The host ran his pen over his reservation book—no help there. A couple of teenagers hovered near the door, clearly hoping to be seated. At last she looked over her shoulder, peering in the depths of the dining room. Sheila sat in the far corner, sipping at a martini. Would she really care if Bernie…

The guy grinned and muttered in his low voice, “It’s only just over there. I’m not going to abduct you.”

The Shift of Numbers by Warrington, David
Handsome Devil by Ava Argent
Tomorrow by C. K. Kelly Martin
Chains of Destruction by Selina Rosen
A Thousand Deaths by George Alec Effinger
The Golden Ghost by Marion Dane Bauer
Overtime by David Skuy
Platinum (All That Glitters #3) by K. A. Linde
Touch of a Thief by Mia Marlowe
Rock of Ages by Howard Owen