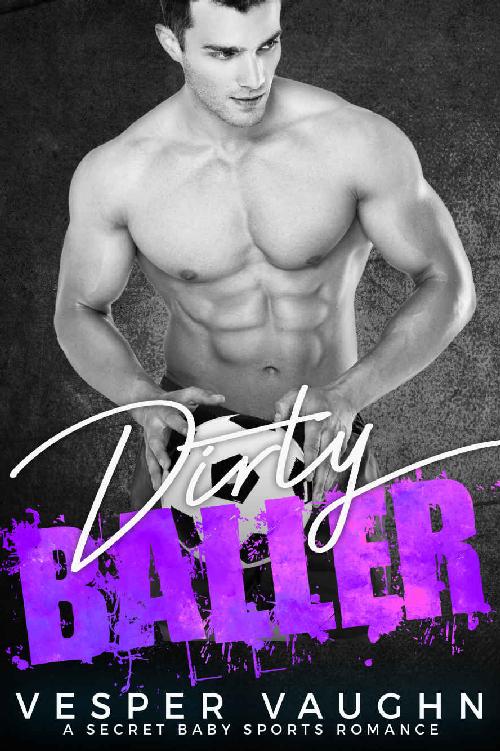 Do you like free books? Sign up to be a part of my advanced reader team. Receive an early copy of my new releases in exchange for an honest review!
Sign up
available at my website: vespervaughn.com.

The sound of clicking keyboards fills my ears. The air is heavy with the scent of sugary, half-eaten donuts that litter the cluttered desks of my coworkers. The scent combines with a fog of cheap coffee. I pass Jim, the oldest sportswriter in the building, standing at the microwave.

“Please tell me that you’re not microwaving your coffee,” I intone to him as I place my perfectly prepared lunch in the office fridge. I smooth down a curling edge of painter’s tape that I’ve written my name on. It’s the only way to ensure someone doesn’t steal my carefully made sandwich.

Jim laughs, opens the door of the microwave, and lifts out his chipped mug covered in faded footballs.

I stiffen and lower my voice. “Don’t call me that in the office.”

Jim pats me on the shoulder. “Your dad would insist I give you hell. I am, after all, your honorary uncle.”

He wanders across the busy newsroom and disappears behind one of the dozen stacks of sky-high paper towers covering his work station.

“Childs, my office. Now,” barks the voice of my editor.

I stand up a little straighter and walk past Brenda Sparks, my nemesis. She’s been out to get me since my first day here when she handed me a cup of coffee. I thought it was a gesture of friendship, but I’m like ninety-nine percent certain she spit in the cup before handing it to me.

Brenda glares at me from behind her pair of hipster horn rimmed glasses. She says nothing and I return her icy silence. She’s three years my senior in the office, but that doesn’t stop her from thinking I’m somehow her competition.

I walk past my boss and into her office, which is neat as a pin. I look at the New York skyline across the Hudson and feel a familiar shiver of excitement.

“You know that old question? ‘Would you rather be in Jersey looking at New York City or in New York City with a view of Jersey?’”  Sandra asks me, shutting the door of her office.

“Yes,” I reply, not certain of where this is going.

“I’d always choose being in Jersey
looking at
the city over being
in
the city. I swear to God they tax you for breathing over there.” She sighs and sits down at her desk, resting her worn pair of Converse shoes on her desktop. “How do you feel about London.” There’s no lilt in her voice that makes it seem like a question.

“The city in England?”

She rolls her eyes. “On second thought, maybe I won’t send you if you’re going to be asking me ridiculous questions like that.” She leans forward to grab her steaming mug of coffee. She’s a low-maintenance kind of woman, but she’s definitely not drinking microwave coffee. I smell expensive beans. Probably from the gourmet shop downstairs. “London, England – yes, England.
That
London. Across the pond.”

I feel a surge of high school excitement. I used to be obsessed with London. I had bedsheets with a map of the tube network on them and a poster of the London Eye hanging on my ceiling. It was the last thing I saw at night when I went to bed.

“I love London. I mean, I think I would love London if I ever got the chance to go.”

Sandra picks up a thick manila folder. “Perfect. Plane ticket’s in there along with a bucketful of research. You can thank your intern for that. What’s his name? Sal? Larry?”

She chuckles merrily. “Not even in the ballpark. I never bother learning intern names. You know why?”

I shake my head.

“Because they’re always gone by the end of summer. There hasn’t been a single one of them I’ve not scared off from journalism entirely.” She takes a sip of her coffee and ruminates on these words. “That means I’m doing my job.”

I stand up before she forces me to chuckle along with her. “Thank you, Sandra.”

She waves her hand. “You’re doing me a favor. The old crew would piss and moan too much about the jet lag. Have a safe flight, by the way. Oh, and eat some fish and chips for me while you’re there, will you? And a pitcher of Pimm’s.”

I lie and tell her I’ll make sure to do that. I can almost hear my sister laughing at me already.

“Prissy Hayley, getting drunk in a bar? Right. Okay.”

I step back into the newsroom and I can feel Brenda’s hateful laser eyes boring through my body.

Jim stands up. “You going to London, I hear?”

The newsroom as a whole grinds to a halt. My cheeks are on fire from all this unwanted attention. I glance quickly at Brenda, who is fuming, and make a mental note to check under my car later to make sure she hasn’t strapped a bomb to the underside.

“Yup!” I say, trying to sound eager but not
too
eager. I’d hate for Brenda to think I’m bragging. It would only give her yet another reason to put a hit out on my life.

“Congrats! Don’t fall in the Thames!” Jim laughs and the whole room joins in with him. I wonder vaguely if that’s some sort of inside joke but don’t have the confidence or people skills to ask right now.

Instead, I do what I’ve always done. I keep my head down and head back to my desk.

I wait until I’m sure no one is standing over me to open the folder. I see the plane ticket and realize that my flight leaves in five hours. I yelp and grab my purse. As I begin to run toward the exit, I run smack into Brenda.

“Leaving so soon?” she asks me, her voice thick with bitterness.

“Um, yeah,” I reply, trying to walk around her. She blocks me with her body.

“This was supposed to be my story. And guess what?”

“What?” I say with absolutely zero ferocity. Brenda scares me.

She crosses her arms. “When you fail at this, I’ll be there to pick up the pieces of the story and run with it.” She moves her body and walks away from me. “Good luck,” she calls over her shoulder.

It’s only as I’m pulling onto the interstate toward my dingy apartment that I realize something crucial.

I don’t know the first thing about British football.

Good thing I’ve got a long flight to get me caught up.

“I don’t know what strings Sandra pulled in accounting, but I’m pretty confident this is the nicest hotel in all of London,” I say into my cell phone.

“What floor is it?” my sister, Alison, asks me.

I flick open the long, velvet curtains and peek out the window. I shut them rapidly, feeling a little queasy from the height. “Um, probably really, really close to the top.”

Alison laughs. “Then I’m guessing you’ll be missing out on the London view. Let me guess. Curtains shut tight to keep your fear of heights at bay?”

I exhale, still a little shaky. “I don’t make fun of
your
phobias, Alison.”

“What kind of older sister would I be if I
didn’t
take advantage of making fun of you?”

I have no answer. I hold my phone between my ear and my shoulder and unzip my ragged duffel bag, hanging up my only nice bit of clothing before it can get too wrinkled.

“So what are you doing tonight?” Alison asks me.

“The usual. I have a lot of research to get caught up on-“

I shut the closet door. “Stop what?”

I laugh. “I am
not
going out tonight. I’m exhausted. My body thinks it’s like three o’clock in the morning and I have to be up at the crack of –“

I sigh and walk into the bathroom, flicking on the switch. This place even has a claw foot bathtub. I’m practically itching to curl up into it with some good reading and spend the night here. “I’m not
you
Alison. I can’t do that.”

“You think I don’t know that? I
do
know that. But even Dad says you need to lighten up and get out more. You’re in
London
for crying out loud. You might never be
back
in London. This is your dream city. Be different. Be something other than yourself for just
once
in your whole entire life, alright?”

I bite my lip and look in the mirror. She’s right. “Okay. Help me pick something out?”

I have to hold the phone away from my ear to keep Alison’s shriek from piercing my eardrum.

After a five-minute video phone call with Alison, I’m wearing a pair of dark wash denim leggings and a silky black tank top. It’s not what Alison would wear, but she said it was more than good enough. I even put on some makeup, which I never do.