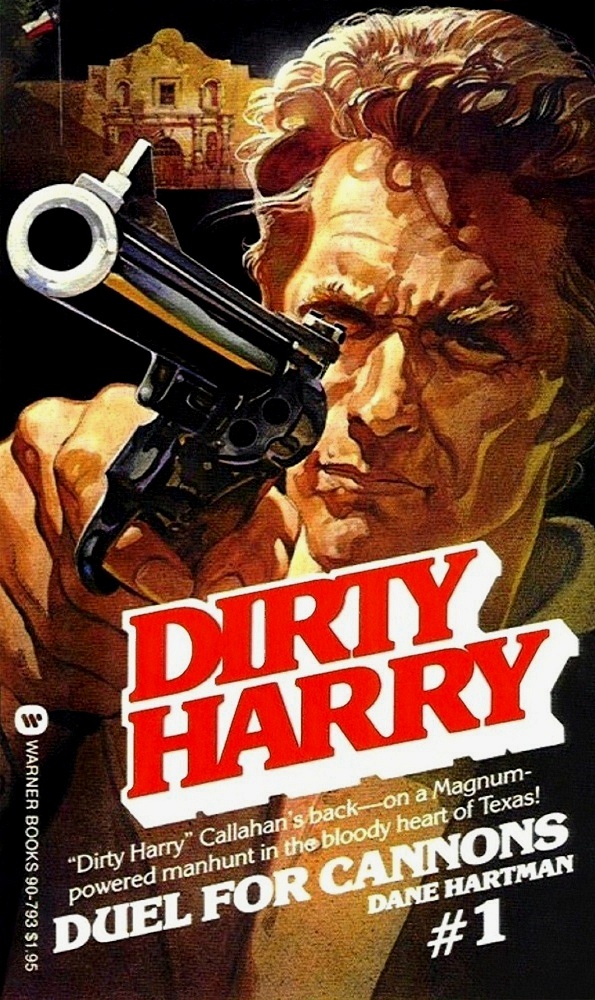 DIRTY HARRY—THE
CRIMEBUSTER NOTHING CAN
STOP, NOT EVEN THE LAW!

“Dirty Harry” Callahan blasts his way from the mean streets of San Francisco to the blazing byways of San Antonio. His target—a crime boss who’s got the whole town, including the cops, under his thumb. Harry’s all alone now, with nothing but a .44 Magnum and a bagful of dirty tricks between him and instant death!

SHOWDOWN AT
THE ALAMO

“On the count of three,” said Sweetboy. “Go for a speed-loader.”

Harry felt sweat appear on his forehead. The San Antonio night was hot. The interior of the Alamo was hotter. His Magnum seemed to get heavier and heavier.

His leg began to throb. He suddenly couldn’t remember whether his jacket pocket had flaps or not.

Harry’s right thumb was kicking the Magnum’s cylinder open as his left arm dug into his jacket pocket . . .

B
oopsie’s head exploded. One second the cartoon character was bending down to shake the little girl’s hand, the next second hunks of thick, painted plastic were flying off in all directions.

Sheriff Boris Tucker didn’t see the bullet smash into the character’s head. The person in the Boopsie suit had just leaned in front of him to talk to his daughter when it happened. All Tucker knew was that his little girl was screaming in pain and that their vacation was over. It was only after Boopsie fell over and Tucker had pulled his Bulldog .44 Special from his waistband that the sheriff noted the gaping holes in both sides of the character’s head.

Tucker noticed a lot of things as he automatically scanned the area. He noticed that one of the holes in the Boopsie head was fairly round and small as compared to the big, jagged hole in the other side. He noticed that a thin stream of blood had begun to drool out of the jagged side. He noticed that several plastic pieces had spun out into his daughter’s face, leaving several cuts. He noticed that his stunned wife had gathered their daughter into her arms and was desperately trying to soothe the howling girl. And he noticed a big, dark-haired man in dirty white overalls shouldering his way through the gathering crowd of onlookers. He noticed the man’s right arm moving as if pushing something into his overall pocket.

The last thing he noted before going after that man was his wife’s pale face. Her expression was silently pleading with him not to go.

He heard her voice in his mind again. “Boris, don’t be a hero.” How many times had she said that to him? At first, it was said in the laughing, joking tones of a loving wife secure in the knowledge of her husband’s capabilities. After a while it had become their morning joke, part of their regular breakfast regimen. She would start clearing the dishes, he would strap on his gun, she would accompany him to the door, he would kiss her, and she would say, “Boris, don’t be a hero.” It had been like that for years.

In the last few months, however, the tone had become strained, almost strident. The whole thing had become serious for her when the threats started. She knew he could handle the various vermin, punks, and hoods in town, but when his own people started trying to pressure him, make him quit, fire him, and then frame him out of office, she didn’t know what he would do. But because she loved him, she kept silent. Except for those five words. “Boris, don’t be a hero.”

In the back of his mind, where Boris filed everything he didn’t need for his work, he realized that she understood, but because of all the pressure, he found himself taking his frustration out on her. All of a sudden, it was like he couldn’t do anything right. She didn’t like his drinking, she didn’t like his overtime, hell, she didn’t even like sex anymore. He thought this little vacation would smooth things out. Sure, a little time away, let the whole thing blow over, let Nash take care of everything—that would satisfy her.

And she was just beginning to relax when Boopsie bought it. Now Boris Tucker saw what his wife was thinking written all over her face.

Leave it alone. Put the gun away. We weren’t hurt. Let the locals handle it.

But she didn’t realize what he did. She didn’t have the experience to know that the hole in the cartoon character’s head couldn’t have been made with anything but a high-powered handgun shot at close range with a silencer. And anyone shooting a high-powered handgun with a silencer was after blood. And the only important blood Boris Tucker knew of in the immediate vicinity was Boris Tucker’s. And he wasn’t about to let his own assassin get away.

When the milling, curious crowd got a glimpse of Tucker’s high-luster blue Bulldog revolver gripped in his meaty hand, they gave the sheriff plenty of room. He pushed through like a maddened bull, his head down, his beady eyes darting from side to side.

He saw the dusty yellow road of the amusement park swirling from the many vacationers’ feet. He saw the worn wooden plankings that made up the vaguely wild West buildings on both sides of the street. He saw the faces of the parks’ employees. Those who knew about Boopsie looked shocked. Those who didn’t, looked tired. There was not one security guard, shocked or tired, to be seen.

That’s what I get for being too cheap to go to Disneyland, Tucker thought, still moving purposely forward. If anything untoward happened in the world of Mickey Mouse, there would be dozens of smiling, short-haired gentlemen with twenty-five inch biceps crawling all over the place within seconds. But here, at the Fullerton, California, “Western Ghost Town,” where the sound of stuntmen shooting blanks at each other occurred all day long, the Boopsie attack could go ignored for minutes.

It just goes to show, Tucker told himself, you’ve got to do everything yourself. You can’t trust anyone to protect you. The educational and judicial systems in the country had shown themselves to be hollow. Tucker had to admit that even the enforcement branches of the United States were ineffectual shells of what they had been. The whole thing was criminal-oriented, not victim-oriented. If the law had its way, he wouldn’t have even been carrying his Bulldog and the assassin could have mowed them all down.

But no one was going to tell Boris Tucker where and when he could carry his own weapon. The Bulldog was a good, solid, inexpensive .44-caliber revolver, perfect for personal use. It was about four inches shorter and twenty-three ounces lighter than the Smith and Wesson .357 Magnum he used on the job. Its five-shot, double-action, and ramp-front sight was good enough for him. And it would be enough to take care of this assassin, he thought. But first, he had to find him.

Tucker had stalked to the end of the street without catching a glimpse of white overalls. But as soon as he came around the right corner, a hunk of wood at least six inches long ripped off the side of a building next to his head and spun behind Tucker’s neck.

The sheriff heard a mechanical cough as he instinctively fell to one knee, brought his revolver up with both hands, caught a glimpse of a white-overalled knee, and fired.

Tucker’s aim was good. He hit the exact spot the man in the overalls’ heart would have been if a tree hadn’t been in the way.

Tucker’s judgment was bad. As soon as the crackling retort of his revolver echoed through the area, most of the tourists turned toward him, expecting the start of another show. The smiles on their faces disappeared, however, when they saw a husky blond man in a red Hawaiian shirt and beige work pants shooting at a tree with a Bulldog instead of a black-garbed bad guy challenging the marshall with a six shooter. Suddenly most of the families found a pressing need to shop inside or go have lunch.

As Tucker rose to his feet, the street started clearing. Tucker blinked. The man in the overalls was no longer behind the tree. The sheriff walked quickly to its gnarled trunk. Damn, he thought, pushing his finger into the hole his bullet had made, this guy is pretty good. He smiled in spite of himself. In a strange sort of way, he savored the coming confrontation.

Victoria by Knut Hamsun
Wayfaring Stranger: A Novel by James Lee Burke
The Darkening Hour by Penny Hancock
Crouching Tiger, Forbidden Vampire (Love at Stake) by Kerrelyn Sparks
Peony: A Novel of China by Buck, Pearl S.
A Diet to Die For by Joan Hess
To Love & Protect Her by Margaret Watson
Hit the Wall (Blythe College) by Paige, Rochelle
Evil for Evil by K. J. Parker
November Foxtrot (Rhythm of the Heart Book 2) by Jade, Scarlett