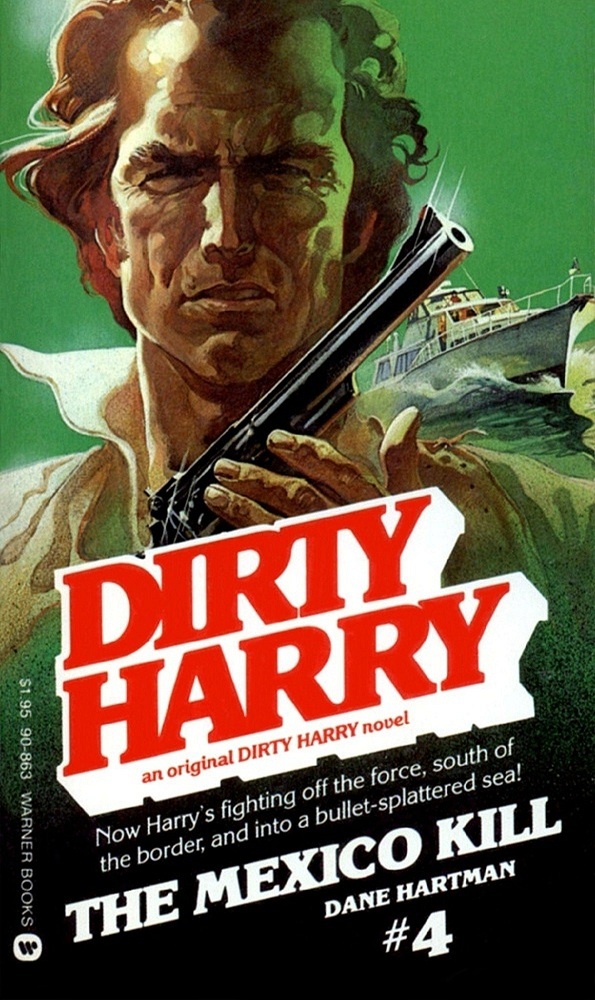 “DIRTY HARRY” IS ON
A RAMPAGE—AGAINST A
MOB-RUN DOPE NETWORK
ONLY HE CAN BUST!

Not even losing his badge can keep “Dirty Harry” Callahan away from Magnum-powered action. Now Harry’s working for a millionaire, and battling dope-running sea pirates from San Francisco to Mexico’s heroin-packing shores. Behind the scenes and the big guns is his old enemy Father Nick. An underworld kingpin and ex-con, Nick can’t let the past die—and Harry won’t let the mobsters live!

SHOOTOUT IN
THE PACIFIC

There was no sound save the thrust of the engines and the splash of water. Dawn was approximately two and a half hours away. The pilot’s face, visible through the glass, betrayed a look of intense concentration. When he saw Harry making his way around the deck, he slid the protective glass so he could fire the Smith & Wesson gripped in his free hand.

But Harry had anticipated this. He had only brought his head into view, providing just enough temptation to impel the pilot to react. Harry slipped back out of sight just as the Smith & Wesson discharged.

All this happened so quickly that the pilot couldn’t be sure whether he had hit Harry or not. So he leaned out, poking his head into the wind.

Which was when Harry, extending his Magnum out beyond the perimeter of the cockpit, answered his fire . . .

T
o the horizon there was nothing to see, nothing but a vast empty expanse of ocean. The Pacific shimmered in the late afternoon sun; the world seemed to consist only of heat and light. But to the five crewmen who labored aboard the
Hyacinth
the scorching temperature made little difference. They were accustomed to working in such conditions. For years these men had been sailing the globe, generally in the pay of men like Harold Keepnews who owned the
Hyacinth.
The salt of the sea had gotten into their blood.

This leg of their journey, from the waters off Baja California up to San Francisco Bay, was a relatively easy assignment in comparison to what they had had to do the week before. Now it was a matter of navigation and keeping the craft in seaworthy shape. The fishing tournament was a thing of the past, a triumph arduously earned over a series of grueling days. The fish had made them sweat and caused them to strain and rip muscles. The fish had lost, but they’d exacted their price.

Keepnews had returned by private jet to his home, leaving his crew to bring the
Hyacinth
to him. It was a beautiful vessel, a forty-five-foot cutter with round-bilge hull and skeg rudder; a commanding presence, its towering main and foretriangle sails gave it the look of a pure white specter when viewed from a distance.

Occasionally a whale would be sighted, a gray humpback playfully emerging from the deep, spouting a geyser of water, then vanishing again. From time to time, too, the men would observe a school of dolphins migrating in a southerly direction. But only seldom would they ever see another boat which was why, toward dusk on the evening of July 8th, the appearance of a thirty-foot cruiser bobbing listlessly in the water excited the attention that it did.

The cruiser, silhouetted against the westering sun, was visible from the port side of the
Hyacinth,
and the way it cast from side to side caused the
Hyacinth
’s skipper to think it was in some kind of difficulty. He directed the yacht to move closer to the disabled vessel.

When the
Hyacinth
drew in toward the cruiser, the crewmen began to make out a signal beacon that they’d failed to notice before with the sun in their eyes. Tiny discharges of red light were barely discernible. There was, however, still no sign of human life on board this boat whose bow declared its identity in small black letters:
Angel Lily.

The skipper took hold of a megaphone and called out to the
Angel Lily,
asking if there was anyone on board. Presently a figure popped up from below deck, a man with straggly russet hair that drooped to his shoulders.

“Yessir, you could be of help to us,” the man shouted. “Something’s fucked up with our fuel, can’t figure out what the hell it could be. Been out here must be two days doing circles waiting for somebody to come along. Don’t know how happy we are to see you.”

Something about what this man said disturbed the skipper, a fifty-year-old veteran of the sea, but he couldn’t determine what it was. It sounded to him like this man and his companions, whoever they might be, didn’t know the first thing about sailing. How else would they have ended up here in the middle of the Pacific, stranded because they ran into some sort of problem with their fuel? But maybe it was just the man’s looks that bothered him? He was as unkempt and slovenly in appearance as the
Angel Lily.
The
Hyacinth
’s skipper could sense from just cursory observation when a boat was the victim of neglect or simple abuse, and there was no question that the
Angel Lily
had suffered from both.

Despite his reservations, the skipper was not about to abandon a stricken boat. He gave the order to drop anchor, then returned his attention to the
Angel Lily.

Now there was a second man on the deck. He was taller, less hirsute, but the skipper didn’t like his looks any better. The skipper kept quiet, maintaining a steady, scrutinizing gaze, his arms crossed over his chest.

“We got a dinghy here, we’ll be over there directly,” said the first man.

“Don’t you want us to come over to you?” the skipper inquired. “Maybe we can diagnose your problem and send you on your way.”

“Oh, save yourself the trouble. No way in hell this crate’s going to get anywhere. Needs a major overhaul. And it’s sure not worth it. You just take us partway up the coast we’d be mighty appreciative. Drop us off a bit south of Enseñada be just fine.”

The first mate was dubious and expressed his sentiments to the skipper who felt exactly the same way. “But I don’t see what else we can do really. After all, we can’t just leave them here. Enseñada is not far from Tijuana. By tomorrow afternoon we can get rid of them.”

The mate was compelled to agree with the logic of this, without, however, being any more convinced of its wisdom.

“We just have to load in a few things here, and we’ll be right with you folks. Don’t want to hold you up none on account of us.”

After several minutes had passed, the two men carefully lowered their inflatable dinghy over the side and then clambered into it. The dinghy, luridly orange against the darkening water, seemed to take forever to reach the waterline of the
Hyacinth.

The yacht’s crew members assisted the two in hoisting up their duffel bags, which were as bulky as they were heavy. “What in God’s name have you got in those things?” the skipper asked.

The bearded character, who was the only one who seemed to do any talking, shrugged, replying, “All sorts of junk, nothing special.”

With the two safely on board with their possessions, the skipper ordered the anchor lifted. Preparations began to maneuver the
Hyacinth
back on course. By this point, the crew was too preoccupied to pay much more than perfunctory attention to the new arrivals. They were given berths and provided with food and drink; that was sufficient, in the skipper’s view, to satisfy the demands of seagoing hospitality.

Overhead the sky was filling up with stars, becoming glutted with them. Some of them refused to stay put and went streaking crazily downward, looking as if they had every intention of plunging into the Pacific.

Two of the crewmen had decided to retire. The three others, including the skipper, remained on deck, guiding their craft north against a gentle five-knot wind. What the two strays they’d picked up were doing they had no idea; presumably they’d gone to bed. They’d heard not a sound from them since they’d come on board.

In the silence, broken only by the sea lapping against the hull, any noise, even a cough or a grunt, was easily picked up, and it sounded louder, more significant than it actually was. When the three men on deck heard the footsteps, bootheels producing a rough rhythmic tattoo against the stairs that led from the cabin—they all turned around to see who was coming.