Read Dirty Tricks One Up On You html Online

Dirty Tricks One Up On You html 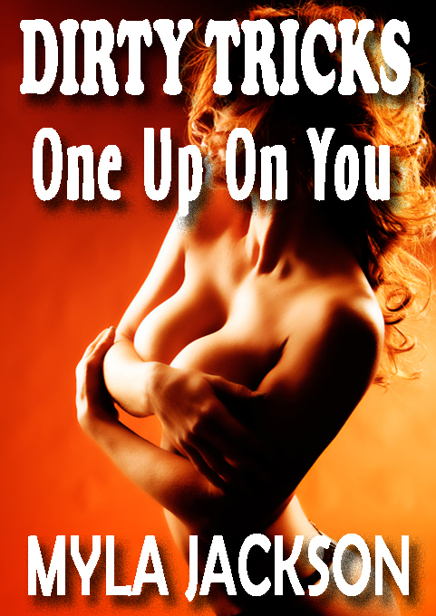 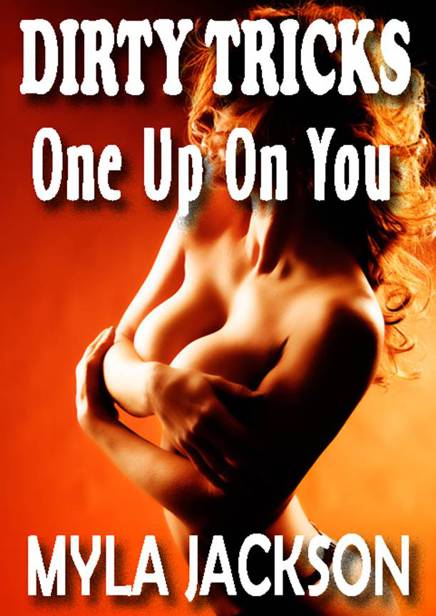 Dirty Tricks: One Up On You
by Myla Jackson

Copyright © 2011, Myla Jackson. All rights reserved. No part of
this publication may be reproduced, stored in a retrieval system, or
transmitted in any form or by any means, electronic, mechanical, recording or otherwise,
without the prior written permission of the author.

This is a work of fiction. The characters, incidents and dialogues
in this book are of the author
’
s imagination and are not to be construed as real. Any resemblance
to actual events or persons, living or dead, is completely coincidental.

This
ebook is licensed for your personal enjoyment only. This ebook may not be
re-sold or given away to other people. If you would like to share this book
with another person, please purchase an additional copy for each recipient. If
you
’
re reading this book and did not
purchase it, purchase your own copy. Thank you for respecting the hard work of
this author.

One Up On You

Charli Sutton sighed and swiped
the surface of the bar, her hand moving in slow, listless circles, her gaze
following Kendall Mason and Ed Judson as they spun and laughed around the dance
floor.

"What's wrong, Charli?"
Audrey, the owner of the Ugly Stick Saloon, relieved Charli of the rag and
tossed it into the sink behind the counter. "You haven't been yourself
lately."

"I don't know." Charli
heaved another sigh. "I think I'm missing Austin." She filled an
order for a cowboy in a black T-shirt, sitting at a barstool and turned back to
Audrey.

Audrey shook her head. "I
don't miss Austin. That's where Randy and Jason live. I've never been happier
getting as far away from the city as I could."

"Yeah, I don't miss them,
but I miss the nightlife and the variety of people you met there. I've been
here with you at the Ugly Stick from the start, but I'm...well..." She
flung her hand in the air. "I don't know."

"Bored? Lonely? Need to get
laid?" Audrey chuckled. "I can understand that. Been feeling a little
that way myself."

"You?" Charli blinked
hard and stared at her boss, noting the beautiful strawberry blond hair and
light blue eyes. "How could you be bored or lonely? You're gorgeous."

"And driven to make this
place work. I don't have time to date. But you," she waived a hand in her
direction, "have no excuse. You should be out there dating."

"Yeah, but it's been so
long, what do I do? I'm starting to feel itchy. Wanderlust is tugging at me,
making me want to leave or do something different." Charli pulled a beer
mug from the shelf above her and filled it halfway from the tap, swallowing a
healthy slug before she set it on the counter. The cool beer slid down her
throat but did nothing to take the edge off her twitchiness.

"Are you unhappy being the
assistant manager of the Ugly Stick?" Audrey asked.

"No, don't get me
wrong." Charli leaned on the counter and sighed again. "I love my
job."

Libby Hammons, with silky brown
hair and deep cleavage flashing out of her low-cut blouse, slid her tray on the
bar and offloaded the empties.

Even Libby managed to find dates
in this little corner of Texas.

"Need 5 whiskey shooters,
you choose the whiskey, a pitcher of Bud Light, a fruity wine cooler and five
mugs for table twelve." She pushed her curly blond hair behind her ears
and glanced over at Audrey. "I could use a hand with the tables in the far
corner. Tia picked a bad night to be sick."

"I'll take care of
them." Audrey grabbed an empty tray and hurried to the corner where the
waiting customers were getting restless.

After Charli filled Libby's order
and sent her on her way, she sighed for the hundredth time and slumped a hip
against the bar.

"That's a mighty big sigh
for such a pretty little lady."

Charli glanced at the man sliding
onto the stool to her left. "What can I get you?"

"Guinness." He leaned
both elbows on the counter, the movement stretching his blue chambray shirt
over broad shoulders.

A tug of latent awareness pulled
at Charli's gut. "Need a mug?"

That tug blossomed into
full-fledged attraction—the first she'd felt for a male in at least four
months. Charli popped the top off the bottle and plunked it on the counter in
front of the stranger. "You're not from around here, are you?"

"Actually, I am." He
downed a healthy swallow and turned halfway around to watch the crowd on the
dance floor.

Charli's brows dipped. "I
haven't seen you in the saloon."

"Just back from a tour in
Afghanistan. Before that, I was too busy preparing for deployment to stop
in."

"Oh." Charli's interest
perked and she looked closer. She should have known he was in the service. Hair
cut short on the sides, his face angular, tanned and lean, the man reeked of
military, his movements confident, strong and proud. Not a bad looking guy.

He faced her again, a smile
lifting his lips, his teeth shining white in the semi-darkness of the saloon.
"I'm Connor Mason, Kendall's older brother." He held out his hand.

Her brows lifted and she shook
the man's hand, a jolt of awareness shimmying through her body. "Ah yes,
Kendall talks about you all the time. Nice to finally meet you."

"I couldn't help but
overhear your conversation with Audrey."

"It's nothin'”. Charli
shrugged. “I like moving around. I grew up in a family that moved every two
years. I'm hitting the two-year mark here."

"Thinkin' about leavin'
then?" He swirled the beer in the bottle of Guinness, his attention there.

Not on Charli, as if he didn't
really care what her answer was. A stab of disappointment made her reply short,
"Yeah. I think so."

His chin came up and his lips
twisted. "Be a cryin' shame. I was hoping to get to know you. To me,
you're a fresh face to Hole In The Wall, Texas."

"Thanks, but I live in
Temptation." The blue funk she was in lifted slightly, a glimmer of hope
making her smile.

The cowboy in the black T-shirt
lifted a finger to capture her attention. "Can I get another beer?"

Charli hurried toward him,
anxious to take care of his order and get back to her conversation with Connor.
"Another draft?"

After filling his order, Charli
hurried back Kendall's brother. She could imagine him in a uniform, her body
warming all over. She loved a man in uniform. "How do people deal with
nothing to do?"

"There's always something to
do around here, you just gotta know how to make things happen."

"Maybe that's my problem. I
don't know how." But she'd like it if he gave her a few ideas. She looked
at him from beneath her eyelashes.

"You city folks are used to
having everything at your fingertips."

"Are you slamming me for
being a city girl?"

"No, not at all, just makin'
a statement." He leaned forward, his lips turned up at one corner.
"Out here, you gotta make your own fun."

"How?" Charli flung
both hands in the air. "When people leave here, they go home. The Ugly
Stick is where they go to make things happen. I work here. It's not the
same."

Mason shrugged and took a long
pull from his beer before he answered. "Guess it's up to you to figure out
what's fun." He stood, slapped a couple bills on the counter, and tipped
his fingers at her. "Nice to meet you," he said in his smooth
southern drawl. Then he winked, nodded to the man in the black T-shirt, turned
and left the bar.

Charli couldn't take her gaze off
the man. Not until he disappeared through the entrance of the saloon did she
realize her heartbeat had kicked up a notch. Not only that but she hadn't
sighed in the past ten minutes, nor did she feel like it.

Connor Mason had her blood
pumping like no other man had in the past two years since she'd been working
the Ugly Stick.

With a lift in her step, she
finished her shift, helped shut down the bar, slid into her black Mustang and
pulled out of the parking lot. She lifted the hair from the back of her neck
and let it fly in the wind from the open window.  Before she'd gone more than
thirty yards down the road, her cell phone rang on the seat beside her.

Now who the hell was calling her
at three o’clock in the morning?

She glanced at the caller ID.

She debated not answering, but
after the fourth ring, she hit the talk button. "This is Charli."

"Ever skinny dipped in
someone else's pool?"

Deep and masculine, the voice in
the receiver was the kind that made coffee commercials sound sexy. It reached
out to caress Charli's ear and other more easily aroused places of her body. A
shiver of awareness snaked across her skin. "Who is this?"

"Let's just say I overheard
your conversation at the bar."

Her breath catching in her
throat, Charli clutched the phone tighter.

"You can spice things up if
you dare," he said, his voice a sensuous whisper.

Charli tried hard to think who
had been sitting at the bar that evening, only conjuring one image. That of the
sexy soldier who'd blatantly eavesdropped on her conversation with Audrey.
"Connor?"

A surge of anger spiked her
adrenaline. "Look, I don't need a pervert daring me to skinny dip in
someone else's pool. Do me a favor and don't call this number again."

"With a body as beautiful as
yours, I'm surprised you're afraid."

Charli's thumb hovered over the
off button, but the deep timbre of his voice had her mesmerized, her body
heating at the rich tone. "I'm not afraid. I'm just not stupid."
She'd hoped to come off indignant, but the best she could do was breathless.

"Suit yourself and play it safe...or
take the dare. Judge Stephen’s pool, three fifteen—be there. I'll be
watching."

A click followed by silence
indicated he'd hung up. Charli stared down at the phone, not sure if she'd
heard things. She shook her head. No, she had not just had a call from a sexy
stranger daring her to skinny dip in the judge's pool. Temptation was too small
a town. Getting caught wasn't a question. Everyone was always in everyone
else's business. Besides, the judge lived smack-dab in the oldest neighborhood,
surrounded by old biddies who spread gossip faster than a wildfire during a
long Texas drought.

What was she even thinking about
this challenge for anyway?

As her SUV drove past the turn to
Judge Stephen's house, her foot slipped off the accelerator, her belly tightening.

She glanced at the clock on her
dash. At three-twelve in the morning, all those old biddies were sound asleep.
The judge would be as well. Her skin felt sticky from eight hours of work
behind the bar and the hot Texas night wasn't helping to cool her. The thought
of slipping naked into the cool waters of a swimming pool made her body yearn.