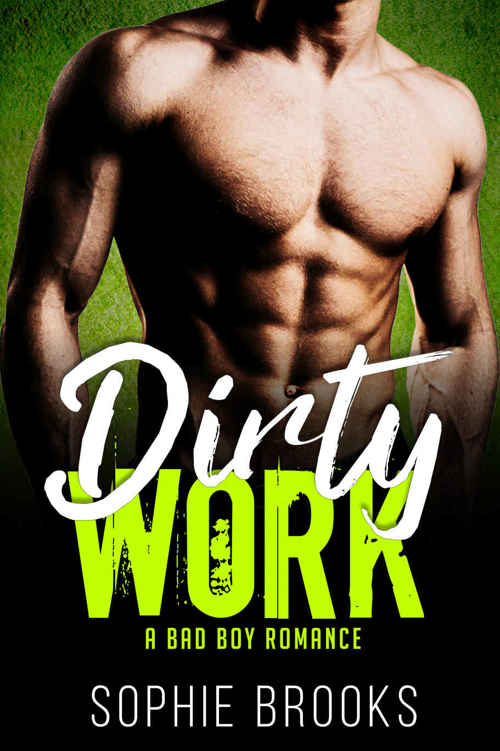 All rights reserved. This book or any portion thereof may not be reproduced or used in any manner whatsoever without the express written permission of the author except for the use of brief quotations in a book review.

This book is a work of fiction. All names, characters, events, locations, and incidents are the product of the author’s imagination or are used fictitiously. Any similarities to real people, places, or events are entirely coincidental.

Note: This book was previously published as
Fiona’s Fixer-Upper
.

ARC List:
Sign up
HERE
if you’d like to get advanced copies of my new releases for free in exchange for an honest review. Once you sign up, you’ll also get
Private Instruction
for free.

COULD THERE BE anything better than a hot, naked man in my shower? And not just any man. I’d always liked the way Jake looked. Six foot two, with honey blond hair that a comb couldn’t tame. A sexy goatee and a trail of stubble lining his strong jaw made him look like the bad boy he was. He’d spent years working construction, so he had plenty of muscles in all the right places. His powerful arms were made for wrapping around me.

I could go on about his chest for several days. Impossibly smooth, tan skin covered his hard pecs and abs. He also had the most piercing eyes I’d ever seen, deep pools of blue that were currently focused on me. Only me. “Let’s make this happen,” he said.

And I wanted to. I wanted to tear off my clothes and join him in there. I knew he wanted me to also, because he got a commanding look on his face and said, “Did you hear me?”

I took a step forward. He was still looking at me so intently it made me melt. His perfect lips opened and I wanted to kiss them, but then his actual words finally got through to me as he repeated them: “When did this happen?”

What?
Reality came crashing down on me as the hot, pulse-quickening image faded away.

There
was
a sexy guy in my shower, but he was fully clothed and looking at me like I was crazy. “It isn’t a hard question,” he said. “When did the window break?”

Oh! “Sorry, I was thinking about something else,” I said, trying to appear as if I were fully vested in this conversation and hadn’t been imagining anything even remotely inappropriate. “On Monday. I opened the window to let the steam out after my shower and the crank broke. Now it won’t close.” My house wasn’t exactly new, and things often went wrong. Which was why Jake was here in the first place.

He rolled those baby blues. “I can fix anything, Red.”

The last trace of the delicious fantasy vanished completely, and I sighed. We were back to this again. “My
hair
is red. My
name
is Fiona.”

“Got it, Red. I’m gonna have to get a new crank from the hardware store.”

“Is that expensive?” The thought of spending yet more money I didn’t have to fix this house drove all thoughts of the annoying nickname from my mind.

“It’s a hand crank for a sixty-year-old casement window. I don’t think it’s going to break the bank.”

He glanced at me and then turned back to the frosted glass window. It was the old-fashioned kind that opened outward like a small door. It was usually controlled by a small crank that turned to open or close it. When it worked.

Jake let his gaze travel from the open window back to me. His mouth settled into a wicked grin. “If you’re low on cash, you could sell tickets to watch you shower.” His gaze fell to the street beyond my front yard. “Looks like there’d be a pretty good view.”

“Then I’ll cancel my plan to camp out on the sidewalk tomorrow morning.” He pulled his phone out of his pocket and swiped at it as if he were changing his schedule. Such a comedian. But his act was made less convincing by the way his eyes weren’t on the phone at all, but instead sweeping up and down my body, pausing to linger on my straight skirt and tight t-shirt. His eyes moved upward, and he could have been looking at my face, but I knew better. He was focused on my shoulder-length wave of auburn hair. He’d always loved my hair. Said it made me look as Irish as my name.

Jake stepped over the edge of the bathtub and suddenly it was very crowded in the small bathroom. He brushed past me as he exited. I was tempted to accuse him of trying to cop a feel, but truthfully, it was a very tiny room and he was a pretty big guy. Well, pretty tall, anyway. He wasn’t huge, like a body builder, but he was definitely ripped. His tight black jeans and white shirt showcased that nicely.

I followed him into the living room and reached for my purse. I pulled out forty dollars, effectively halving the amount of money I had for the rest of the week. Unless I hit the ATM before then, which would be a very bad idea. For about the thousandth time in the past year, I wondered if I should’ve stuck with renting. This house was a money pit.

Jake took the cash and raised an eyebrow.

“I mean,
Fiona
, if you want me to do something else, show me now. Don’t pretend to forget and then call me while I’m at the hardware store. Don’t wait until I’m walking out the door and then say ‘Oh by the way.’”

He rolled his eyes again. “Do you have to waste my time
and
insult my intelligence? Maybe do just one or the other, but not both.” Jake had always had the ability to sound sexy and sarcastic at the same time.

“Well ... okay. One of the cabinet doors pops open and won’t stay shut. Almost knocked me out the other day.”

I followed him into the kitchen and watched as he ripped off the tape holding the cabinet shut. Sure enough, the door opened on its own, coming to rest at a ninety-degree angle.

"I’ll get a magnetic catch. Anything else?”

He nodded and headed toward the front door.

He sighed and came back into the kitchen.

Forty-five minutes later, Jake was back with the new window crank and the other things I’d needed. Apparently, he hadn't had any qualms about spending the rest of my money on food. The scent of fried chicken had preceded him through the door.

We ate on bar stools at the kitchen counter which the real estate agent had told me was a ‘breakfast nook.’ She’d been much more truthful about nice features like the breakfast nook than she’d been about how much upkeep the place needed.

“Pretty much the same.” I’d been an assistant at the local library since graduating from college three years ago. “How’s your job?” He was a contractor who did a lot of construction work.

“Not bad. Getting some overtime.”

“Good, then you can pay for the chicken.”

I nibbled on a chicken wing, though I never much saw the point of those unless they were smothered in barbecue sauce. A question rose in my mind and escaped my lips before I could pull it back. “Are you seeing anyone? I heard something about Stacie.”

He took his time, scraping the dark meat off a leg with his teeth. Finally, he put the bone down, stood up, and washed his hands at the sink. “I see a lot of people,” he said.

Which, of course, was true but not what I meant. My friend Alison had seen him with Stacie a time or two at a local bar, but she said they hadn’t been all over each other. Not like Jake and I used to be. Lisa, whose husband was friends with Jake, didn’t know if they were a couple, either. It was maddening.

Jake worked on the cupboard door while I cleaned up. Then I grabbed a new book from the stack I’d borrowed from the library today. I had to get my mind off Mr. Tall, Blond, and Evasive, or I’d go crazy. But first I asked if there was anything I could do to help.

“No,” he said. "Okay if I go down in the basement when I’m done? I left my miter saw down there.”

“Of course,” I said, and walked through the house to the front porch, settling on the creaky wooden swing. How unfair that Jake wasn’t just eye candy. And he wasn’t just a handyman or cheap labor either. He was my ex-boyfriend, and until three months ago, he’d lived here with me. And now he didn’t, and he might be seeing someone named Stacie. Maybe.

Life would be so much easier if I could afford to hire a real handyman.

“SO, HAVE YOU seen Jake recently?” my twin sister Bree asked. She was still far too tuned into my moods even though she’d recently moved to Florida with her husband, Alex.

“No. I mean, he came over to get some of his stuff from the basement,” I said.

“And to fix some things in that house of yours,” Bree said with a laugh. “Ever think that maybe you bought such a fixer-upper because it would force you to find a man to help you out?”

I laughed, too, but I didn’t find it very funny. The man I’d loved had found it all too easy to walk away from me and my house.

“I still don’t get why you guys broke up,” she said, with an irritating ability to follow my train of thought.

“We were having some problems and it led to an argument. A big one. And then he just left.”

“Because you told him to.” We’d been over this before.

“Yeah, but I didn’t mean I wanted to break up with him. We were both so angry. He refused to admit there was anything wrong. He wanted to pretend that everything was fine. So I told him that if he hated talking about our relationship so much, he should leave.”

It still confused the hell out of me. Nothing else I’d said had gotten through to him in the year we’d lived together. But somehow,
that
did. And he’d left. Just walked away. Couldn’t he have stayed and tried to work things out? The next day when I came home from work, his stuff was gone from the bedroom. I found the bulk of his belongings boxed up in a corner of the basement. And I heard from Mike and Lisa that he’d rented an apartment. It’d been clear that he was done.