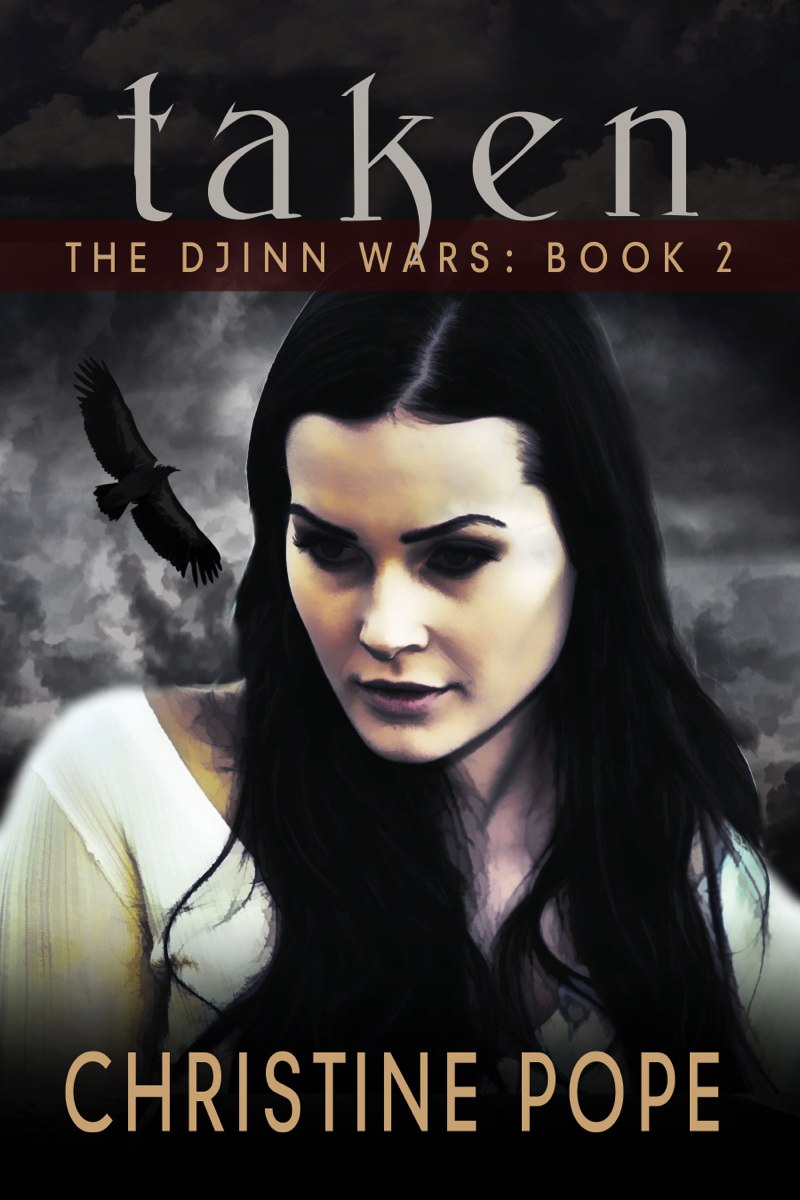 Book 2 of the Djinn Wars

This is a work of fiction. Names, characters, places, and incidents are either the product of the author’s imagination or are used fictitiously. Any resemblance to actual events, places, organizations, or persons, whether living or dead, is entirely coincidental.

All rights reserved. No part of this book may be reproduced in any form or by any electronic or mechanical means, including information storage and retrieval systems — except in the case of brief quotations embodied in critical articles or reviews — without permission in writing from its publisher, Dark Valentine Press.

Please contact the author through the form on her website at
www.christinepope.com
if you experience any formatting or readability issues with this book.

To be notified when new titles by Christine Pope are released, please sign up
here
.

I don’t know how long I stood out in the icy air, feeling the wind whip at my hair, tears seeming to freeze on my cheeks. Overhead, the sky grew darker and darker, a bruised-looking mass of clouds building from the northeast.

It was Dutchie who brought me back to myself, stirring me out of my frozen misery. She thrust a cold, wet nose into my palm and whined, her head cocked to the side. I forced myself to look down. The dog didn’t look particularly troubled, although I could tell she wanted to go back in the house. Who could blame her, with the temperature barely above freezing? Since she was a border collie mix, she had a thick coat, but it wasn’t
that
thick.

Some time would have to pass before she realized that Jace hadn’t gone off with those men just to shoot dinner, that he wouldn’t be back by the end of the day. After all, he often disappeared for hours to go hunting, and he didn’t always take Dutchie with him. Most of the time, but not always.

“Okay, girl,” I told her. We did need to go inside. I had to regroup, figure out what to do next. Standing out here in the cold and making myself sick wasn’t going to do either of us any good.

Before I went inside, though, I walked down to the gate and inspected the electronic mechanism that usually controlled it. As I’d feared, a few wires were hanging out of the box, which meant the gate was now basically useless. I didn’t know the first thing about electronics, or soldering, or whatever else I’d need to do to fix it.

My internal voice was far more confident than I felt.
But there are manuals and all kinds of equipment here at the compound, so don’t give up before you’ve even started.

That sounded great. Except right then I wasn’t sure I could even summon the energy to feed myself later that evening, let alone teach myself enough about wiring that I could actually repair the gate and not blow myself up in the process.

Shivering, I pushed the gate shut. It was heavy, and I had a feeling the next morning my muscles would give me grief about the way I’d just overexerted them, but closing the gate at least gave the compound the illusion of security, if not the real thing.

“Come on, Dutchie,” I said, and began the weary trudge up the hill to go back inside the house. She trotted along next to me, looking a little worried, although that might have been me projecting my own emotions on her.

What in the world was I supposed to do now?

One step at a time. Up the hill. Inside the house. Close the door and lock it. The thugs from Los Alamos must have picked the lock or used the black box to open the door or whatever, because the front door lock still seemed to work. Or maybe it hadn’t even been locked. Jace and I hadn’t been all that careful about it lately. What was the point, with the house guarded by a nine-foot wall and an electronic gate?

And now I was — well, I wouldn’t say I was exactly feeling better, but at least I wasn’t inviting incipient frostbite. Around me, everything looked familiar, unchanged. The fire still crackled in the hearth, and the air was spicy with the scent of the Christmas tree that stood in the corner.

The tree. I went to it and inhaled its fragrance, reached out to touch its soft needles. Jace had brought me that tree. He’d brought it because he loved me.

That memory was all it took. The tears I’d pushed back returned with a vengeance, coursing down my cheeks as my fingers clenched so tightly on one of the popcorn strands surrounding the Christmas tree that it broke, sending soft white kernels falling to the floor.

Shit. I dropped to my knees and attempted to gather them all up. What if that was one of the strands Jace had made? I had hardly anything left of him, and now I’d just broken something that he’d touched, something he’d created with his own hands.

You don’t know that,
I tried to scold myself.
You made twice as many of those strands as he did, since he ate almost as much as what actually ended up on the tree.

Unbidden, a smile came to my lips, even through the tears. I remembered him sitting on the couch, dark eyes guiltily shifting to me as at least one kernel went in his mouth for every one he strung on the thread I’d given him.

How could he be so human? Were the djinn really all that different from us, or had Jace perfected the guise of humanity better than most of them?

I didn’t know, and right then, I didn’t care. The only thing I knew was that I loved him, and he’d been taken from me.

Rage erupted in me at that thought, pushing away the despair. Well, that was right on schedule, wasn’t it? First denial, and then anger. But I didn’t want to come to acceptance, once the anger had burned its way through me. I’d never accept the way the gang from Los Alamos had stolen Jace from me. They had no right. He’d done nothing wrong, in fact had done everything he could to prevent the Dying, from having his people continue plotting to destroy humanity. And when it was clear that he’d been overruled in that debate, he’d somehow chosen me from all the survivors, had made sure at least I would be safe.

True, the djinn were responsible for humanity’s demise, but not all of the elementals had participated in that genocide. It seemed clear enough to me that was a fine point of distinction the Los Alamos people didn’t want to make. Much simpler to condemn all the djinn as a single monolithic group, right?

With an almost physical effort, I made myself turn away from the tree. Then I went down the hall to the guest bathroom, which was closest, so I could splash some water on my face and blow my nose.

The simple actions helped a little. Not completely, but at least I felt as if I had a slightly stronger grip on my emotions. Crying wasn’t going to change anything. I wouldn’t allow myself to feel bad for having a temporary meltdown, but on the other hand, I knew I had to get myself together and figure out what to do next.

It was only a little before noon. Strange how my life could be changed so utterly before the day was even half over.

As I looked down at her, Dutchie gave me a half-hopeful tail thump.

“Close enough to lunch,” I told her, then went to fetch a cupful of food from the big bag of dry food in the pantry.

Feeding the dog helped me to calm down a little. Jace was gone, but I still had Dutchie to take care of, and I needed to take care of myself, too. I needed to be in the very best fighting shape possible so that when I went to rescue my djinn lover, I wouldn’t have self-sabotaged by moping around and not eating, or drinking too much, or whatever else I felt like doing at that particular moment.

Although my appetite had completely deserted me, I made myself eat some leftover baked sausage and macaroni. I remembered sitting down and having that meal only a few nights earlier, recalled the way Jace and I had laughed and plotted and planned for the coming spring, how we’d realized we should make another foray to Home Depot to scoop up any seeds and other useful gardening items that the gleaners had left behind.

Well, now at least I knew who those gleaners were. The people from Los Alamos.

How many of them were there? The leader of the group had said they were trying to in-gather as many people as they could, but that meant nothing to me. New Mexico hadn’t been a densely populated state even at its peak. Altogether, there were probably only a few thousand survivors of the Dying here, but how many of those humans had the vengeful djinn picked off before those few souls could make it to this supposed haven in Los Alamos?

The Bride of Larkspear by Sherry Thomas
Keeper of the Black Stones by P. T. McHugh
HuntressTakesAll by Ali Atwood
Serpent in the Garden by Janet Gleeson
The Osiris Curse by Paul Crilley
Wilhelmina A Novella by Ronnell D. Porter
Texas Blue by Thomas, Jodi
Don't Look Back by Kersey, Christine
To Have: Vampire Assassin League #19 by Jackie Ivie
The Vampiric Housewife by Kristen Marquette