Read Doctor Who: The Romans Online

Doctor Who: The Romans 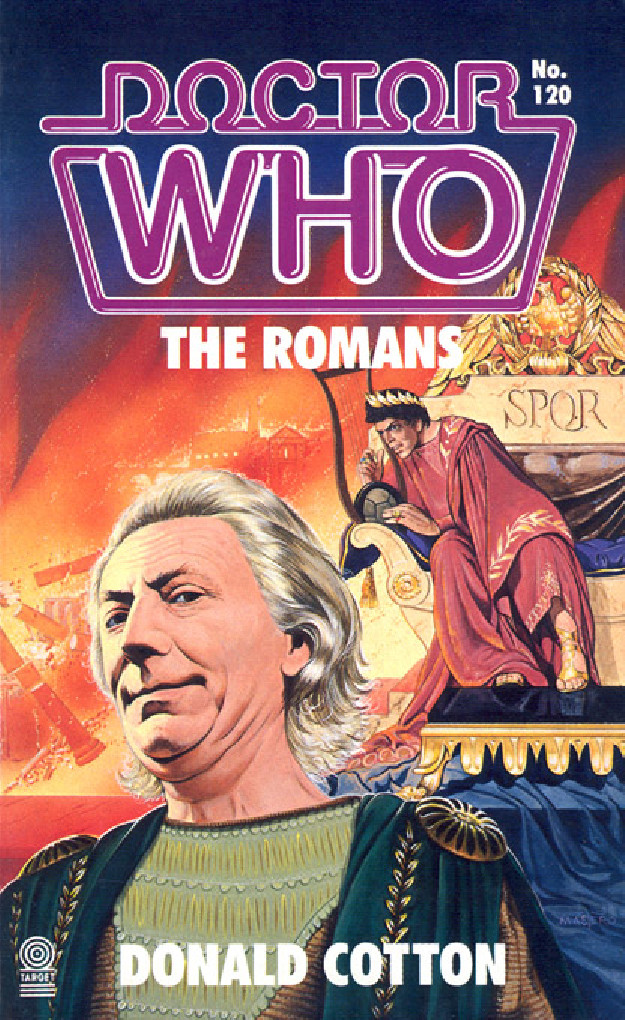 The TARDIS crew members have taken a break from their adventures and are enjoying a well-deserved rest in a luxury villa on the outskirts of Imperial Rome.

But in the gory grandeur that is Rome, things don’t stay quiet for long. If the time-travellers can save themselves from being sold as slaves, assassinated by classical hit-men, poisoned by the evil Locusta, thrown to the lions, maimed in the arena and drowned in a shipwreck, they still have to face the diabolical might of the mad Emperor Nero.

As if that isn’t enough, they also discover that, although Rome wasn’t built in a day, it was burnt down in considerably less time . . .

the Paperback Division of

by the Paperback Division of

First published in Great Britain by

The BBC producers of
The Romans
were Verity Lambert and Mervyn Pinfield,

the director was Christopher Barry

The role of the Doctor was played by William Hartnell Printed and bound in Great Britain by Anchor Brendon Ltd, Tiptree, Essex

With Love and Patience

This book is sold subject to the condition that it shall not, by way of trade or otherwise, be lent, re-sold, hired out or otherwise circulated without the publisher’s prior consent in any form of binding or cover other than that in which it is published and without a similar condition including this condition being imposed on the subsequent purchaser.

I First Extract from the Journal of Ian Chesterton

V Second Extract from the journal of Ian Chesterton

IX Third Extract from the Journal of Ian Chesterton

XI First Extract from the Commonplace Book of

XII Fourth Extract from the Journal of Ian Chesterton

XVI Fifth Extract from the Journal of Ian Chesterton

XVII Second Extract from the Commonplace Book of

XXI Sixth Extract from the Journal of Ian Chesterton

XXII Third Extract from the Commonplace Book of

XXV Seventh Extract from the Journal of Ian

Epistle to the Keeper of the Imperial
Archives, Rome

I am in reluctant receipt of your insufferable scroll –

written, I must remark, on papyrus of so inferior a quality that I can only suppose it to have been selected especially to suit the style of your grammatical construction and the insolence of your tone.

One would have thought that even an Empire in Decline and Fall might have seen fit to employ a
scholar
in the august position you have the effrontery to occupy, rather than a denarius-pinching, acidulous accountant with no apparent grounding in the Humanities.

However, I realise that times are what they weren’t, and that the general decline in education standards has left it likely that the technocrat shall inherit the Senate, no matter what the embitterment of the literate.

I must ask you, therefore, to attribute the fact that I now apply stylus to tablet in response – rather than inserting your impertinences into my incineratoriurn as they deserve – not to any old world courtesy on my part - should you be fool enough to fancy you detect any such consideration between the lines - but to the irritating circumstance that your communication is merely the latest in a dreary series of querulous queries; and I now wish to stem this nuisance at its source, before my desk becomes quite buried beneath a pile of junk mail, all of it bearing your indecipherable signature.

Now, having completed the civilities, let me at once address myself to the matter of the burden of your repetitive song.

You speak, confound you, of breach of contract; and have the further temerity to threaten the invocation of penalty clauses, if I do not at once submit for your inspection those chapters of my
Annals
which cover the Great Fire of Rome and the last few years of Nero Caesar’s reign, described so aptly by my colleague Suetonius as ‘The Terror’.

Now, I must make it quite clear to you that I, Tacitus, am not accustomed to being thus pestered and berated by jumped-up lagos-in-office who are apparently incapable of recognising a hot property when they read one: for must I remind you that those sections of the book already completed have received extremely favourable advance notices from all discerning critics? And already there is talk of its dramatisation by Juvenal as the centre-piece of next year’s ‘Festival of Roman Arts, Culture, and Blood Sports’ at the Circus Maximus.

However, since you have the infernal bad taste to speak of the possibility of your withholding not only the final down-payment, but the royalties themselves, in the event of my not delivering the goods, it seems I have no alternative but to explain the set of somewhat bizarre circumstances which have persuaded me to retain the remainder of the work - at least, until I have completed further research as to the authenticity of certain documents which have only recently come into my possession; and which would, if genuine, necessitate not only the postponement of publication, but the rewriting of History itself!

I will not detain an incompetent dunderhead like your goodself with a detailed account of how I acquired these extraordinary papers - which I now enclose for your attention. Suffice it to say that my field workers are constantly abroad about my business, and it is not for me to enquire too closely into the methods they employ in the collection of information.

It is possible, I admit, that I am in danger of becoming the victim of an elaborate hoax, devised - possibly by Suetonius - for my discomfiture. Hence my caution. But the new facts herein revealed would, if true, explain a great deal which has previously puzzled me, and I am therefore tempted to believe them.

You will remember, from your, no doubt, laborious perusal of my last manuscript, that it contains references to a series of prodigies and portents which heralded the year of the Great Fire: and that these included unnatural births, such as two-headed calves and the like; sea-monsters sporting in the Tiber; apparitions of the gibbering and squeaking, sheeted dead variety; and finally, a clutch of comets, which flamed and flared furiously over the Forum, to the horror of the opprobrious populace.

Also, unearthly noises were heard in the vicinity of Assissium: and it is my cautious submission that, for these, the enclosed exclusives may well furnish an explanation.

Indeed, we would then have no choice but to believe that, during this doom-encumbered year, Rome was visited by intruders from another time, space, or similar unwelcome dimension; and that the
possibly
comet-like vehicle in which they travelled was known to them as the ‘TARDIS’.

You think, perhaps, that age has at last unseated my reason, and wobbled my laurels in the process? I can only suggest that you reserve judgement until you have read the items in question; at which time it will be my dubious pleasure to receive your inept comments upon them. For the moment I will only remind you that there are more things in Olympus and Earth than are dreamed of by an urban district employee of lowly grade and status; and remain,

With marked lack of respect,

Your best-selling author of this or any other year, Tacitus.

Post Scriptum:
I have arranged these documents in what I assume to be their chronological order. You will be sensible to share this assumption.

First Extract from the Journal of Ian
Chesterton

Well, we are still here, Headmaster – and, in my opinion, likely to remain so: marooned, that is to say, on an island in Time which, from all the evidence, appears to be somewhere within the dominion of Ancient Rome -

though at which period in its history I am as yet unable to say. A fine thing!

Today, having nothing else to do, I returned to the wreck of the TARDIS; and, of course, found the damnable contraption much as we had left it two months ago, toppled horizontally at the bottom of a rocky ravine, and looking even more cracked and dilapidated than when Barbara and I first had the misfortune to encounter it in I. M.

However, I was alarmed to see that yet another tree had fallen across it, and that much of its battered exterior is now obscured by a grasping growth of brambles and other hardy perennials, making it difficult for me to believe that the machine can ever be extricated from its present predicament; or indeed, that if restored to the vertical, it will ever again be functional, even in its habitual haphazard fashion.

I was nevertheless making a lonely and hopeless attempt at defoliation when a restraining hand was placed on my shoulder, causing me to leap into a nettle-bed, and a petulant voice demanded that I desist...

‘My dear Chesterton,’ exclaimed the Doctor, ‘whatever are you about? That vegetation provides a valuable camouflage against the prying eyes of the curious! Would you wish the TARDIS to be discovered and our secret revealed?’