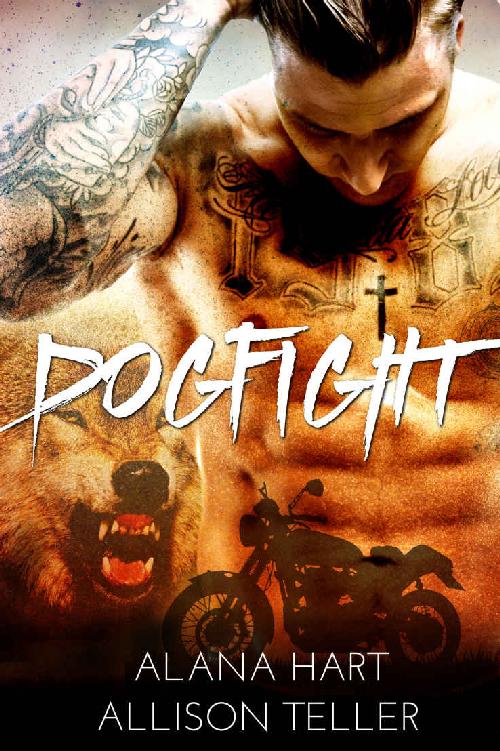 All rights reserved worldwide.  No part of this publication may be reproduced, distributed or transmitted in any form or by any means, or stored in a database or retrieval system, without the prior written permission of the author.

This book is a work of fiction.  Names, characters, places and incidents are products of the author’s imagination or are used fictitiously.  Any resemblance to actual events, locales or persons, living or dead, is entirely coincidental.  Please note that this work is intended only for adults over the age of 18 and all characters represented as 18 or over.

Alana Hart’s newsletter is the absolute best way to stay up to date with new releases, free books and special offers from Alana Hart.

Would you like to receive Alana Hart’s new releases for FREE, in exchange for an honest review of 20 or more words?

Sign up here if you’d like to be notified of Allison Teller’s new releases and special offers.

Casey’s eyes popped open under her sunglasses. Thankfully they were mirrored, so no one seemed to notice she had fallen asleep. She stretched in a lawn chair, skin warm from the hot sun and smelling like coconut tanning oil. Beside Casey, the pool glistened, the water lapping peacefully in the filters. Outside a high, brick wall Casey could hear Cambridge’s midday traffic.

Casey pushed her sunglasses up her nose, wiping the sweat away, and reached for the iced tea on the small table beside her.

She sipped the now watery drink and cast her eyes over the men in front of her. Frankie Sway sat at a white patio table beneath a wooden arbor with ivy and flowering vines crawling all over it. His long, tanned bare feet were crossed at the ankles, his swim shorts dry now, a barrel chest with a fine sprinkling of black hair, and soft hands moving swiftly as he cleaned a heavy, black gun.

The past two months playing his dippy girlfriend had been exhausting. But she needed to get to his farm. If she didn’t get there, all of this was for nothing.

Between her and the farm stood Frankie and his crew. Victor was a cousin and Frankie’s right hand man. He was taller and bulkier than Frankie, but none of it was fat. He wore a cap low over his eyes and twisted his hands together, the large, silver rings catching the sunlight. He didn’t trust Casey.

There were three other men, two were Frankie’s bodyguards. They both looked the same, average height, muscular, dark haired, and Casey had forgotten their names after looking into their backgrounds. They weren’t important, just in the way. The last man at the table seemed even less important, but she found herself staring at him.

As if he felt her attention on another man, Frankie turned his dark eyes on her. The smile that crept onto his face was slow. He stood, abandoning his drink and tucking the gun into the back of his swim shorts.

“Jenny, I haven’t introduced you to the man with the plan.” He reached for her. She gave him her hand, his grip tight, and let him pull her up beside him. His hand settled possessively at her hip. He was taller than her, built like a boxer, and had so many scars; gunshots, knife wounds, dog bites. He always assured her, though, that in the end, those who inflicted the wounds wound up in the ground.

She had done her best to avoid making eye contact with this man, even while both of them wore mirrored sunglasses. Something about him made her uneasy. But now she had no choice but to smile and shake his hand.

His grip was rough, quick. Not like Frankie’s soft, lingering touch. His black tee shirt was snug, tattoos snaking up his arms and peeking from under his collar.

As soon as Connor let go of Casey’s hand Frankie pulled her closer, his fingers splayed over her belly.

“I met this sweet thing at Pavlov’s.” He grinned and kissed her shoulder.

Although she couldn’t see his eyes, Connor’s mouth quirked at the corner. Pavlov’s was a strip club.

Casey frowned at his assumption. “Bartender.”

Frankie laughed and smacked her ass. “Don’t let her fool you, she knows how to move.” He shook her hips, grinding against her, and she was forced to laugh and move with him. When he wrapped his arms around her, she tucked her head into his shoulder, feigning enjoyment. Victor glared at her, the bodyguards grinned, admiring their boss, but Connor watched her, an eyebrow cocked, and she couldn’t help feeling like he was seeing through her mask and finding who she really was.

She didn’t like it. As soon as she had some alone time she needed to do some background checking on this guy. She had a job to do and didn’t need anyone getting in the way, especially not someone with full lips and a square jaw, and dark hair that fell over his forehead just so.

She realized she had been staring at him too long and looked away. She shouldn’t worry, the sunglasses hid her eyes just as well as his did. For all she knew he could have been watching birds fly overhead, or maybe he was watching her watch him. Doubtful, but the thought sent a little thrill of awareness through her belly.

Frankie released her from the cage of his arms and palmed her generous ass.

“Give me a half hour with my guys, then meet me upstairs.”

“I’m sure I can entertain myself for half an hour,” she purred.

“That’s my girl.” Frankie swatted her ass and beckoned his men to follow.

Casey tested the water, dipping her toes into the pool and watched Victor and the bodyguards follow Frankie. She was hoping to catch something as they headed inside to his office.

Connor hadn’t moved, but Frankie held up a hand. “My friend, why don’t you stay and have another drink? After lunch I want to see how my bike looks.”

Connor nodded, his smile cool. He sat in the shade of the ivy-covered arbor, sipping a glass of Frankie’s very old scotch, his eyes behind his sunglasses, while Frankie led his men inside.

Casey managed to hear, as the slider closed, Victor asking Frankie if they were still good for August sixth. She saw Frankie nod before the glare of the sun on the glass blocked them from her sight.

There was a week until August sixth. If everything she had found out so far was true, she had a week to get Frankie to invite her to his farm. Once the summer was over, Frankie would be moving on to a different woman, one who could keep him warm during the cool Autumn nights. Casey’s demeanor and the whole persona she was projecting said hot summer sex, not sweet love by the fire. He may even want a burly man to cozy up with.

Connor was a big man, and quite muscular. Perhaps he would be Frankie’s next lover. She couldn’t tell where he was looking, but she had been standing there long enough to look suspicious. He may only be building Frankie’s bike, but Casey couldn’t shake the feeling that Connor McKinnon was trouble.

Tossing her glasses to the ground, she turned and dove into the cool water, letting it wash away the sweat and Frankie’s touch.

Connor watched Frankie Sway’s girlfriend dive into the pool. The fact that Frankie left him alone with her meant there were cameras outside. Not that he would do anything to the woman. Frankie liked his toys too much.

This woman, Jenny Cartwright, was just another toy. A gorgeous, brunette with the kind of green eyes a man could get lost in, and a body that she knew how to move. That was the thing that kept nagging at him. The way she moved, spoke, stood, it was all so deliberate. The only time he had seen her relaxed was when she had fallen asleep in the lounge chair. No one else noticed, but he had watched her while she slept, the deep rise and fall of her breasts, and the small jerk of her head when she woke.

She seemed unimportant, airheaded, not even worth a second thought on this job, but Connor was a wary man to begin with.

How much did she know about Frankie’s business? Was she part of it somehow? He doubted it, but you could never be too careful. If she was still around when things went down, he would have to decide if she was going to go down with Frankie and his crew.

Connor stood, coming to the edge of the pool, and watched her body slice through the water. He liked women, preferred them older than her, older than himself sometimes, but there was no denying Jenny Cartwright was attractive. She was distracting, and Connor wondered if it was intentional.

He pulled off his sunglasses, the light bouncing off the water blinding him, but he could see her better without them.

Cutting through the water with ease, Jenny came up at his feet and flinched when she saw him standing over her. The look of shock and her gasp were quickly stifled.

She pasted on a smile and lifted herself out of the water. Dripping, she looked up at him, her green eyes bright in the sunlight, standing too close. She smelled like chlorine and coconut. The smile, so artfully in place, slipped a little when her eyes met his. She straightened her shoulders.

In one swift movement, she pulled the tie of her top and wriggled out of her bottoms, tossing them aside, and with a long look over her shoulder, walked into the house bare-assed.

Connor was good at controlling his reactions and his body; he didn’t often let his own emotions or feelings get in the way of a job. The stiffening in his jeans surprised him. He allowed himself a small grin before heading to the garage. Good to know he wasn’t as cold as everyone thought.

Why the fuck had she done that? Casey paced Frankie’s bedroom, a huge space with high ceilings, a four-poster bed, a claw foot tub by the window, and a sex swing. Yes, the man had a sex swing, and yes, she had been in it. Thankfully, he preferred the bed.

But what Frankie had in mind for her when he came up was not was what troubled her at the moment. Why had she let Connor McKinnon get to her? One small moment, a fraction of the time she had spent building this cover, and she let that man shake her?

It had been his standing over her when she came out of the water that threw her off. She had perfected the flimsy, uninterested, sex goddess act so that she had most of Frankie’s crew and staff fooled into believing it. Victor may have been the only one to guess otherwise, but Connor had tripped her up.

The Start of Everything by Emily Winslow
Report from Planet Midnight by Nalo Hopkinson
The Old Boys by Charles McCarry
The Towers Of the Sunset by L.E. Modesitt Jr.
Dirty by Vaughn, Eve
The Great Gold Robbery by Jo Nesbo
Alexander Jablokov - Brain Thief by Alexander Jablokov
A Wedding Worth Waiting For by Katie Meyer
Mafia Trilogy 03 - The Scythe by Saul, Jonas
Ship of Dreams (Dreams Come True Series Book 2) by Rebecca Heflin