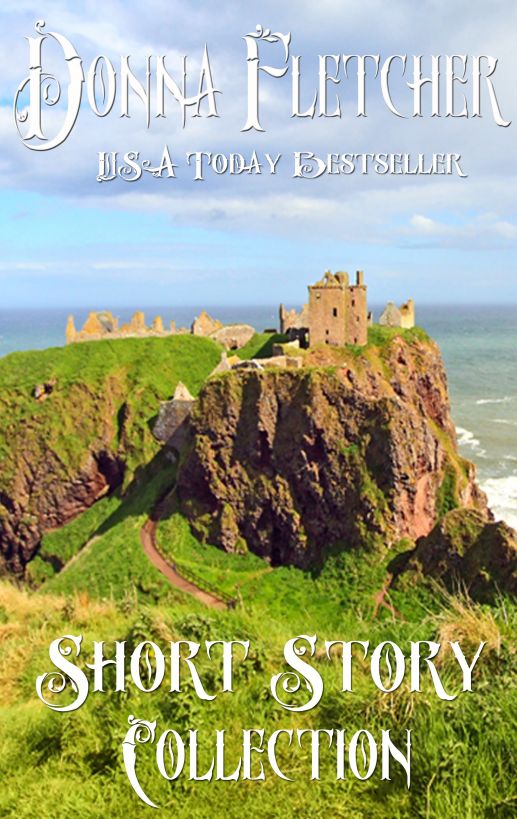 This is a work of fiction. Names, characters, places,
and incidents are either the product of the author’s imagination or
are used fictitiously, and any resemblance to actual persons,
living or dead, business establishments, events or locales is
entirely coincidental.

Published by Donna Fletcher at Smashwords, 2013

EBook Design by
A Thirsty
Mind

No part of this book, except in the case of brief
quotations embodied in critical articles or reviews, may be
reproduced in any form by any means, including information storage
and retrieval systems, without prior written permission from the
author.

The scanning, uploading, and distributing of this
book via the Internet or via any other means without the permission
of the copyright owner is illegal and punishable by law. Please
purchase only authorized electronic editions, and do not
participate in or encourage electronic piracy of copyrighted
materials. Your support of the author’s rights is appreciated.

One Night of Love & The Hobgoblin

The Ghost of Blackstone Manor

Welcome to my short story collection. When I
finish writing a series I feel like I’m saying good-bye to old
friends. I soon miss them and wonder what they would be up to now.
The next thing you know I’m writing a short story about them so I
can visit with them once again.

In the past I’ve posted the short stories on
my website for my readers to enjoy. Many readers have requested
that I put the stories in an e-book so they can enjoy them at their
leisure. So here it is and a BIG thank you to my readers for their
continuing support and encouragement. You’re the best!

One Night of
Love & the Hobgoblin

Based on characters from the book—
The Irish
Devil 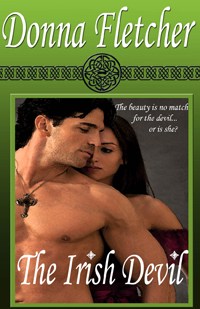 Eric of Shanekill could take no more. He
flung the long, black wool cloak he had grabbed before leaving the
keep around his wide shoulders and stomped through the village
looking as fierce and potent as the name bestowed on him—Irish
Devil. Everyone scurried out of his way, making certain to stay
clear of him. It mattered not, he paid them no heed. His thoughts
were on one thing and one thing only, his wife Faith. He had had
enough and he was going to settle it here and now with her, whether
she wanted to or not.

When he woke a couple of hours ago and
reached out to take her in his arms as he did most mornings, to hug
her close, feel her warmth, her softness, to drink in her beauty
and remind himself how lucky he was to have her as his wife, he had
found her gone.

Not that her absence in their bed was an
uncommon thing, but of late it had become more so. He understood
that as the village healer she felt a duty to the people, but she
also had a duty to him... her husband. And he intended to remind
her that she had been sorely neglecting him of late.

He had never had to remind her of such before
and it troubled him to do so now. Didn’t she care that it had been
one week—one whole week—since they had made love? Didn’t she miss
him as badly as he did her? Didn’t she miss touching him, kissing
him, loving him? Though it had been three years since they had
exchanged marriage vows, the spark of passion had remained strong
within them. And he believed that it had grown ever stronger...
that was until this past week.

Faith seemed not to notice him at all. And a
few times when he had reached out to take her in his arms, she had
stepped away from him. Never had she turned away from his embrace.
She would either drift or rush into his arms and cuddle as close as
she could and he would whisper things in her ear that would rush a
red glow to her cheeks and spark her desire as well as his. The
more he thought about all they shared and all he missed, the
angrier he became.

His strides became more determined and
villagers huddled in gossip as they watched the Irish Devil hurry
to the healing cottage. There was sure to be a confrontation and
most knew who the victor would be.

Eric attempted to control his anger. It would
do him no good to pounce on her, but the thought conjured an image
that was hard to ignore. He had been blessed with a wife who
enjoyed conjugal rights. Faith often made it known how much she
desired him and he had never disappointed her. They made love often
and in places—he smiled with the memories.

They were made for each other and most knew
it. It was as if the heavens had connected them body and soul...
made them one, then split them apart, reunited them and made them
one once again. That was certainly how it felt when he made love
with her—that they were one and would always be—one body, one soul,
one love.

He recalled his half-brother, Borg’s remark
this morning when he had left his three year old son Ryan in his
care.

“Don’t make a fool of yourself.”

Borg had then proceeded, while bouncing up
and down a jubilant Ryan on his knee, to remind him of how from
when Eric had first met Faith he had made a continuous fool out of
himself.

While there were times Eric could agree,
other times had not been as obvious, though he had certainly lost
his heart to Faith quickly enough. But then she was a beauty, long
fiery red hair that sprung in ringlets around her head and face,
skin as pale as freshly fallen snow and though she had a scar that
ran down along her cheek from below her right eye close to her
temple and all the way to her breast, it did nothing to distract
from her beauty. It more reminded him of what a courageous woman
she had been and would always be.

So what had happened between them in this
last week to have her avoid him so? It made no sense and made him
crazy with worry. What was on her mind? Why hadn’t she spoken to
him about it? She had discussed everything with him as he did with
her. She had good incite and instincts and he often relied on her
for settling problems among the villagers.

Which was another reason for his foul mood,
he missed talking with her. She wasn’t only his wife; she was his
best friend. While he missed her in his bed, he missed even more
their talks.

Faith was everything to him and he feared
losing the closeness they had always shared. He stomped like an
angry bear the last few feet to the healing cottage. He would have
his answers, he would demand them, he would not be ignored, she
would tell him what the problem was, he would insist on it and then
he would do what he had been aching to do... he would make love to
his wife.

Several villagers lingered around the cottage
waiting for the healer to administer to their needs. But once they
spotted him they dispersed quickly leaving the benches outside
empty. He should have waited for the door to open and not disturb
her session with whoever it was she was tending to, but he had no
patience. He grabbed hold of the wooden handle and swung the door
open.

He was surprised to see that she was alone,
though glad of it. There was no one there to prevent him from
having his say. His heart hammered in his chest and his anger was
near to boiling. This was it; she would explain or else.

Eric took two steps into the cottage and
kicked the door shut behind him.

Faith dropped the batch of herbs in her hand
to the table and with a weary smile said, “Good lord, Eric, I’ve
missed you so very much.”

Her words knocked the stuffing right out of
him and all he could do was spread his arms wide.

She hurried into them, her arms quickly
circling his back, her head seeking his hard chest and her body
resting against his.

His breath caught for a moment; she was home
where she belonged—in his arms—and his anger vanished in an
instant.

Holding her close, feeling her warmth, her
need for him, he asked, “What troubles you?”

She sighed. “I knew I couldn’t keep my
worries from you for long.” She raised her head to look at him.
“And I feel so guilty for neglecting you.”

“Truth be told it angered me,” he said
honestly not wanting any lies between them.

“I should be the one apologizing for thinking
you ignored me on purpose.”

“I did not mean to,” she said, her fingers
going to lightly trace his lips. “I have missed you more than I can
say.”

“And I you, wife,” he said and as much as he
wanted to kiss her and carry her to the single, narrow bed in the
cottage and make love to her, he knew at this moment she needed to
talk with him. “Now tell me what troubles you. What has kept you
from our bed? What has kept us from making love? What has worried
you so?”

Faith slipped out of his arms and went to
step away from him, but he wouldn’t let her. His hand ran down her
arm and took hold of her hand locking his fingers with hers.

She smiled looking up at him. “Not going to
let me go?”

She shook her head and squeezed his hand.
“No, I don’t want you to let go. I want you to hang on to me and
keep me sane.”

He tugged her to him, though she came
willingly enough and once again he wrapped his arms around her. “I
will not let you go until you tell me and even then I have no plans
of releasing you. I miss you and it is time you and I make
love.”

She sighed much heavier this time. “I would
like that, but I fear there is a problem that must be solved before
that will come to pass.”

“Tell me and I will solve it, for there is
nothing that will keep me from making love to my wife this
night.”

“After you hear, you may think
differently.”

“The villagers have been coming to me with
deep scratches and too many bruises. Some get them while in the
woods and others while working the field, the land near ready for
harvest with winter’s chill all too prevalent. They talk of seeing
a shadow that darts and sprints and leaves behind marks on them.
They see the shadow briefly before suffering its sting. They fear
going into the fields and many, especially the women who forage for
plants and branches to make baskets have hesitated to venture where
they once felt safe. Gossip has started.”