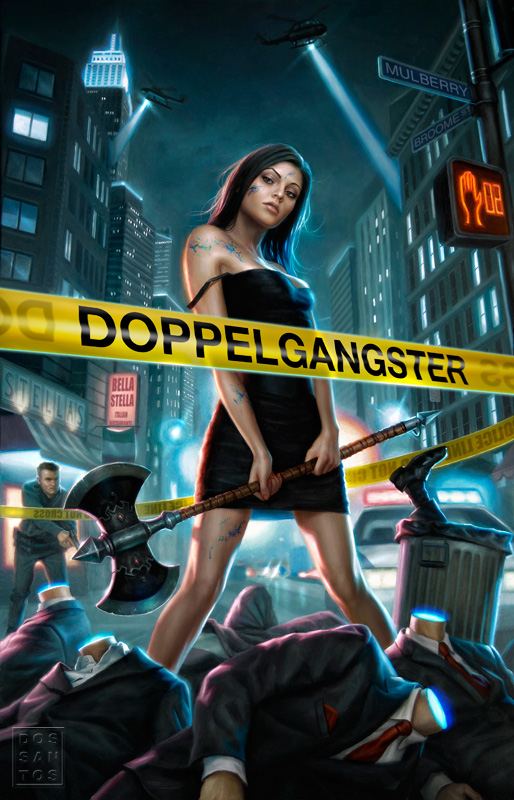 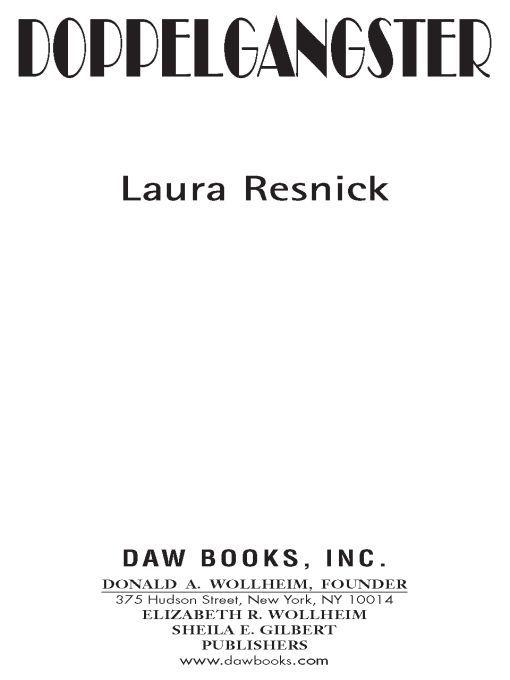 Table of Contents
Title Page
Copyright Page
Dedication
Chapter 1
Chapter 2
Chapter 3
Chapter 4
Chapter 5
Chapter 6
Chapter 7
Chapter 8
Chapter 9
Chapter 10
Chapter 11
Chapter 12
Chapter 13
Chapter 14
Chapter 15
Chapter 16
Chapter 17
Chapter 18
Chapter 19
Chapter 20
Chapter 21
Chapter 22
Chapter 23
Chapter 24
Chapter 25
Chapter 26
Acknowledgements
Raves for the first book in the Esther Diamond series:
“Seasoned by a good measure of humor, this fantasy mystery is a genuine treat for readers of any genre.”—
SF Chronicle
“With a wry, tongue-in-cheek style reminiscent of Janet Evanovich, this entertaining tale pokes fun at the deadly serious urban fantasy subgenre while drawing the reader into a fairly well-plotted mystery. The larger-than-life characters are apropos to the theatrical setting, and Esther’s charming, self-deprecating voice makes her an appealingly quirky heroine. The chemistry between Esther and Lopez sizzles, while scenes of slapstick comedy will have the reader laughing out loud and eager for further tales of Esther’s adventures.”—
Romantic Times
“A delightful mélange of amateur sleuth mystery, romance, and urban fantasy.”—
The Barnes and Noble Review
“A paranormal screwball comedy adventure. Light, happy, fantastically funny!”—Jennifer Cruise,
The New York Times
bestselling author
“Combining elements from the romance, fantasy and mystery genres . . . an enchanting novel that will appeal to readers of all three genres. The mystery is well constructed leaving readers trying to figure out who is behind the disappearances. The heroine is at times funny and determined but is always charming and believable.”—
thebestreviews.com
DOPPELGANGSTER
The Esther Diamond Series:
DOPPLEGANGSTER
UNSYMPATHETIC MAGIC*
VAMPARAZZI*
* Coming soon from DAW Books 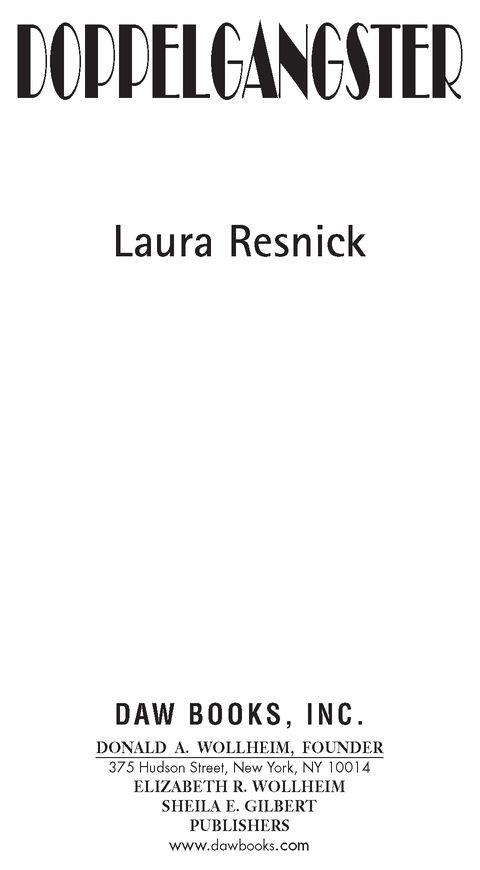 Copyright © 2010 by Laura Resnick.
All rights reserved.
DAW Books Collectors No. 1499.
DAW Books are distributed by the Penguin Group (USA) Inc.
All characters and events in this book are fictitious.
Any resemblance to persons living or dead is coincidental.
The scanning, uploading and distribution of this book via the Internet or any other means without the permission of the publisher is illegal, and punishable by law. Please purchase only authorized electronic editions, and do not participate in or encourage the electronic piracy of copyrighted materials. Your support of the author’s rights is appreciated.
eISBN : 978-1-101-15979-8
First Paperback Printing, January 2010.

For Mom & Dad
(the only existing versions of themselves)
who liked the title
PROLOGUE
T
he fact that I had killed a man was really putting a crimp in my love life.
Well, okay, to be strictly accurate,
I
hadn’t killed him. But I had helped. And I had watched enough of the Emmy Award-winning cops-and-lawyers drama
Crime and Punishment
on TV to know that cops weren’t very understanding about that sort of thing. I had even auditioned for the role of a murderess in a
C&P
episode the previous year, but I didn’t get the part. So, since I had never even played a killer, actually
being
one now was something of a novelty.
It was also rather awkward, since I was dating a cop. Or at least trying to date one. And he was a straight-arrow cop who didn’t look the other way when it came to breaking and entering and vandalism (two more awkward secrets I was keeping from him), never mind murder.
Which is not to say that I had done anything wrong. On the contrary. I stand by my actions. I was fighting Evil.
And if that sounds absurd to you, well, that’s understandable. It sounds pretty damn absurd to me, too.
The man I had helped kill—and I’m using the word “man” in its broadest possible sense—was a demented sorcerer’s apprentice who tried to take over New York City by summoning a virgin-raping, people-eating demon.
You probably think I’m kidding.
In a series of events that I was trying hard not to think about now that they were over, I had helped Dr. Maximillian Zadok, Manhattan’s resident sorcerer and local representative of the Magnum Collegium—a secret organization whose worldwide mission is to confront Evil—track the villain to his underground lair. There we had faced the demon Avolapek (an individual about whom the words “biliously repellant” are far too kind), had defeated him in what might loosely be termed combat, and had slain his maniacal creator, the rogue apprentice Hieronymus.
I am not making this up.
How Max had eliminated Hieronymus was not entirely clear to me.
Most
things about Max were not entirely clear to me. He and a fellow mage, a man named Lysander—whose day job is keeping Altoona, Pennsylvania, safe from Evil (yes, really)—had done some chanting in another language, and Hieronymus had vanished. According to Max, this was dissolution, which he described to me as “something remarkably similar to death.” Since it was a permanent, all-dimensions solution to the problem of Hieronymus and his evil plans, I had no objection. But I also had a feeling that a jury might consider any legal difference (if one existed) between murder and dissolution to be so piddling as to make no difference at all in our conviction and sentencing, should these events ever come to light.
By the time Max arrived at Hieronymus’ secret lair to save me from becoming demon dinner, I had already beaten Hieronymus to a pulp with a candelabra and then thrown him as a decoy at the virgin-raping Avolapek (who did not refuse a free meal, so to speak). So a jury might reasonably conclude that I had actively assisted in the evil apprentice’s demise—or at least softened him up for it. I figured Max and I could both be in big trouble over those events—unless a jury
also
believed the part about Hieronymus summoning a demon and trying to kill a bunch of people (including me) at the very moment we snuffed out his life.
I pictured myself saying in a court of law, “Well, Your Honor, there was this evil sorcerer’s apprentice and a flesh-eating, power-granting demon he summoned from a primordial dimension . . .”
Even I couldn’t see a way to make that script work.
Which was why I felt it was imperative that Detective Lopez, who’d dogged our steps on that case, should never find out what had happened that fateful night. Happily, no one was pressing charges about the breaking and entering and vandalism that Max and I had previously committed (hey, we were trying to prevent more innocents from getting hurt, okay?), and Lopez had dropped that particular subject by now. He was, however, still perplexed about what had happened the night that Max and I, along with several missing persons (Hieronymus’ victims, whom we rescued when we defeated him), suddenly turned up at an obscure Morning-side Heights magic club without explanation, all looking (and smelling) as if we’d been to hell and back. There was also a white Bengal tiger with us—but I digress.
The problem was . . . I really liked Lopez. He liked me, too. But I was jumpy about any topic that might lead to his asking about that night. He sensed I was hiding things, and that raised his cop hackles. So our first couple of dates hadn’t gone that well. Nevertheless, he asked me out a third time. Obviously, it would have been smart for me to say no. From the beginning, actually. It would have been wise to avoid Lopez altogether, to stay off his radar.
But, come on, I’m a single woman in New York City. It takes more than a morbid fear of doing life in prison for homicide to make me turn down a date with an employed, attractive, single, heterosexual man who has nice table manners, listens when I talk, and knows how to kiss.
So I said yes to a third date.
ADS
15.4Mb size Format: txt, pdf, ePub