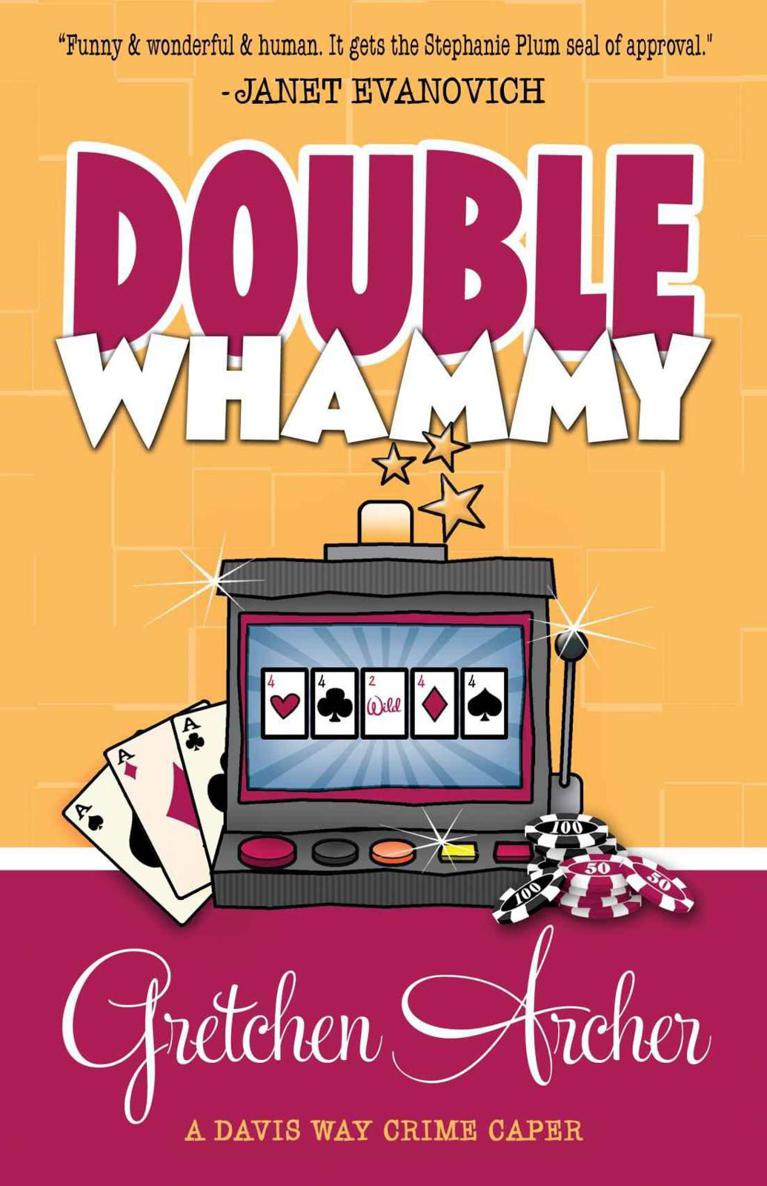 “Funny & wonderful & human. It gets the Stephanie Plum seal of approval.”

“If Scout Finch and Carl Hiaasen had a baby, it would be Davis (Way.)
Double Whammy
is filled with humor and fresh, endearing characters. It’s that rarest of books: a beautifully written page-turner. It’s a winner!”

Author of
Gone With a Handsomer Man

“Archer navigates a satisfyingly complex plot and injects plenty of humor as she goes. This madcap debut is a winning hand for fans of Janet Evanovich and Deborah Coonts.” –
Library Journal 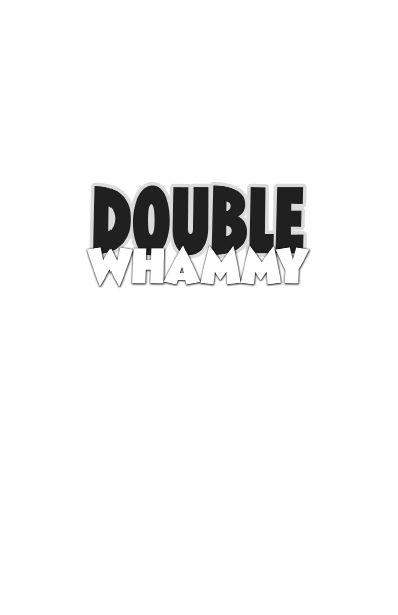 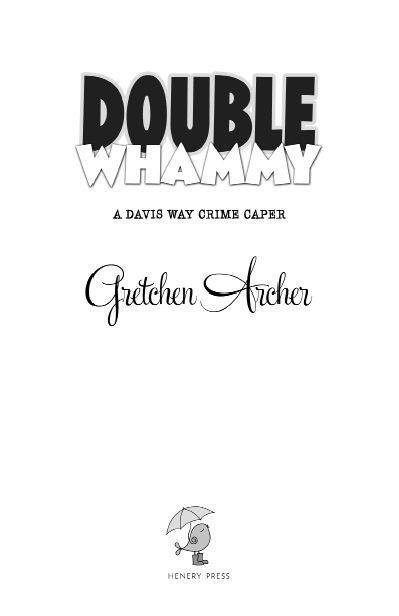 All rights reserved. No part of this book may be used or reproduced in any manner whatsoever, including Internet usage, without written permission from Henery Press, except in the case of brief quotations embodied in critical articles and reviews.

For my husband, who’s running this show.

A little unemployment goes a long, long way, and after more than a year of it, applying for every available position in L.A. (Lower Alabama), I took a right and tried Mississippi. At the end of the road I found Biloxi, where instead of applying for fifty different jobs, I applied for the
same
job, fifty different times.

My final interview, like the dozen before it, began with a polished executive-type, Natalie Middleton. From there, the others had gone in several directions. There’d been a marksmanship test with long-range pop-ups (I aced it), an ink-blob and dot-to-dot psychiatric profiles (not sure about those), and an extensive photo shoot with costume changes and wigs. No telling what this one would bring.

“You’ll be meeting with Richard Sanders,” Natalie said, “our president and CEO. The final decision is his, and it will go quickly.”

I applied for this job six weeks ago. It is two hundred miles from where I live. Most of the interviews have been all-day ordeals. This had already not gone quickly.

Richard Sanders’ office had museum qualities: everything was quiet, valuable, and illuminated. Natalie directed me to a leather chair I was afraid to sit in. “He’ll be right in.”

Right in, for the record, was almost an hour later.

I’d just helped myself to a fifth red-hot cinnamon candy from a crystal bowl on Mr. Sanders’ desk when a hidden door on the right side of the room slid open and a man stepped through, then froze, staring at me as if I was sitting there naked. Eating his candy. Little red squares of cellophane floated through the air as I jumped out of my skin.

Finally, he crossed the room with a guarded smile, hand outstretched.

I skipped around the candy. “Davith Wathe.”

He took his place behind the desk and reached for the folder in front of him. I could see the right angles of a stack of photographs. Of me. The dress-up interview.

I sat up straighter, looking for somewhere to lose the candy. I gave him the once-over while he pored over the photographs, discreetly working the candy at top speed, the roof of my mouth on fire.

The quickest way to describe Richard Sanders was rockstar-turned-executive: early forties, six-two, close to two hundred, strikingly fit, blond, and either perpetually tan or just back from the Bahamas, since it was the dead of winter and he had a late-July glow about him.

He looked up. Baby blues. “Davis?”

“Apple.” The hot candy brick was stuck sideways in my throat.

I was anything but.

He pushed a button on his phone. Two seconds later Natalie snuck up from behind, gently patted me on the back, then landed one between my shoulder blades that almost knocked me into next week. She poured me a glass of water.

I chugged it, putting out the fire.

Richard Sanders slid the candy dish out of my reach.

As soon as it appeared I would live, Natalie said, “Well then,” smiled, and disappeared, leaving us alone again.

“Just where is Pine Apple, Alabama?”

Other than the red hots, the real-live Monet on the wall, and the million-dollar Oriental rug under my feet, I was in very familiar job-interview territory. I had applied for everything with a heartbeat, and the resulting interviews had all had common elements. First, my name threw people off. In my thirty-two years it had been pointed out to me thirty-two thousand times that Davis Way sounds more like a place than a hundred ten-pound female. After that, potential employers like to suggest that I’ve written down my hometown incorrectly. My resume clearly states my credentials, including two college degrees: one of in Criminal Justice and the other in Computer and Information Science. As such, would I really forget where I live?

Next, trust me, he will bring up my size, because I’m considered underheight in general, but especially so for the line of work I’m in. (I’m five-foot-two.) (And a half.)

He threw me for a loop when he asked, “How large is the police force in Pine Apple, Davis?”

“There are two of us.” There
were
two of us. Surely he’d read that far.

“Is there a lot of crime in Pine Apple, Alabama?” He leaned his chair back, elbows to armrests, his hands meeting mid-chest. He rolled a thin platinum wedding band round and round his left ring finger.

“The usual,” I said. “Domestic, vehicular, theft. We double as fire, too.”

“So you’ve had EMT training?”

“And you write computer programming?”

“I’m not sure I’d go
that
far,” I said. “Pine Apple’s a small country town, Mr. Sanders, not exactly a hotbed of criminal activity. I had a lot of time on my hands, so I tinkered with the computer.”

“It says here you rewrote the program for incident reporting statewide.”

I hadn’t put that on my resume. What else did it say there? “Not so much, Mr. Sanders. I only eliminated the inefficiencies of the old program, and it went viral.”

“Why do you want to leave Pine Apple, Davis?”

“You know what?” He looked at his watch. “Let’s save that for later.”

He started up with the wedding band again. “I’m going to say something that could be construed as politically incorrect.” He made direct eye contact. “With your permission, of course.”

“I have a thirteen-year-old son,” he tapped his chin with two fingers, “who has at least five inches on you and probably fifty or sixty pounds.”

“Is he my competition?”

Richard Sanders unexpectedly laughed. “Not hardly. Maybe if we were looking for someone to play Xbox.”

“For all I know, Mr. Sanders, you
are
looking for someone to play Xbox.” I surrendered. “I’ve been interviewing for six weeks, and I still don’t know exactly what this job is.”

Could we get someone in here who does?

After losing my old job I’d made it my new job to get out of bed by ten and drink hot chocolate until early afternoon in my new office, a corner booth at the coffee shop on Banana Street, directly across the street from the police station. Just in case. I’d been doing that for a year when one morning, a few days before Thanksgiving, I sat down to see a section of the weekly Pine Apple Gazette in front of me, folded into a perfect quarter, a one-line ad circled. Like a personal invitation. I drove to Biloxi, Mississippi the next morning, and began the long application process for the unspecified security position at the Bellissimo Resort and Casino.

Monster in My Closet by R.L. Naquin
A Rescued Heart (Rescued Heart Romance) by Replogle, Natalie
Love, Accidentally by Sarah Pekkanen
A Baby's Cry by Cathy Glass
The Legacy of Kilkenny by Dawson, Devyn
What the Cat Saw by Carolyn Hart
The Country Life by Rachel Cusk
Mason (FALLEN CREST SERIES) by Tijan
Vivian by Marie, Bernadette
Pandaemonium by Macallan, Ben