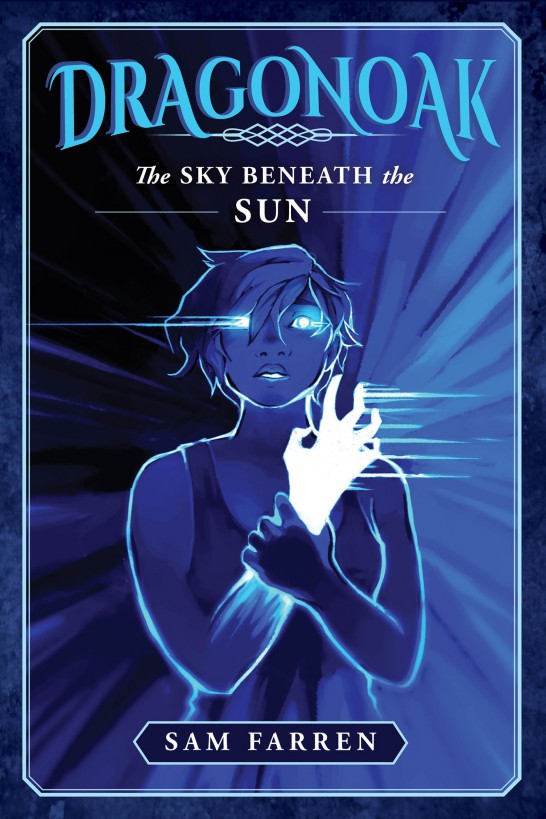 The Sky Beneath
The Sun

Published by Sam
Farren via Smashwords

This ebook is
licensed for your personal enjoyment only. This ebook may not be
re-sold or given away to other people. If you would like to share
this book with another person, please purchase an additional copy
for each recipient. If you’re reading this book and did not
purchase it, or it was not purchased for your enjoyment only, then
please return to smashwords.com or your favourite retailer and
purchase your own copy. Thank you for respecting the hard work of
this author.

For my wonderful
friends who have read my endless, typo-ridden drafts, endured me
bouncing ideas off them at 3am, and have met me with enthusiasm,
feedback, and book-altering suggestions; for those who have kept me
motivated with art, fic, and rampant keysmashing; and for anyone
who has delved into a fantasy novel and not seen themselves
reflected in the world therein.

Other titles in the
Dragonoak
series

Connect with the
author

The women of Port
Mahon wore their scars with pride, and the tattoos inked across
their backs and arms told the tales they weren't interested in
leaving behind. There was only one season in Canth, the season of
the phoenix, and along the coast and out at sea alike, it was
impossible to hide anything beneath shoes and shirts without
suffering for it.

I wasn't
as brave as the women of Port Mahon. I learnt to adapt, learnt to
keep a flask at my hip and sleep through the hottest part of the
day. I worked bare-footed, trousers cut off above my knees, but my
thin vest stuck to my skin with sweat. The pirates who called Port
Mahon home made half their coin on the decks of fishing boats, and
I let them drag me out to sea when one of their own had spent too
long at a tavern the night before. One day, I woke up and there was
no distinction between my place in the port and the
pirates'.

The
Canthian heat was relentless, from dawn through to dusk, and I
returned home smelling of fish guts and sea-salt, clutching a
handful of scuffed silver coins I didn't need.

For all
the discord that made up Port Mahon, its white, square buildings
were laid out in a neat grid, with fierce swirls of murals painted
on the side of every home, every tavern and inn; even along the
edges of the temple at the centre of town. I wandered past them
all, hopped off the sun-baked flagstones along the length of the
beach, and hurried over to the wet sand at the water's
edge.

Home was
a hut with its own wooden pier, jutting off the end of Mahon, where
the rocks rose sharply and formed cliffs. Lights burnt within as
the sun sank into the sea, and I pulled myself onto the pier,
towards the front door. It was never locked, and with good reason;
no one in Port Mahon had the guts to wander in, let alone steal
anything.

“Alright, kid,” Reis said from the table in the centre of the
room, back to me. Their glasses were pushed atop their head, wooden
leg placed on the tabletop as they leant in close, carving
intricate waves into the inside of the shin. I dropped the loose
coins into a bowl by the door, and Reis grunted at the sound,
saying, “What did I tell you about that? Don't need none of your
money. If you're that desperate to be rid of it, go throw it at the
temple.”

“That
money just comes back to you, anyway,” I pointed out, and fell on
the sofa at the far end of the hut, between two doors leading to
bedrooms. The other sofa, by the entrance to my room, was covered
in the books Reis had been working on when I left that morning:
Mahon's accounts, lists of the ships currently making port, the
names of those down in the jail and the names of those soon to join
them.

I
covered my face with my arms, feeling the sea rock beneath me as I
heard the waves rake against the beach, close to drifting off until
Reis said, “Hungry?”

Bolting
upright, I saw Reis lean back in their chair, glasses coming to
rest on the bridge of their nose as they set down their carving
knife.

Reis
didn't like to cook. I usually took care of things in that regard,
and leftovers from the breakfast I'd made were still sealed in a
hefty steel pan, atop the long-cool stove. I dragged myself over,
pulled bowls and chopsticks from the cupboard, stirred life back
into the rice and vegetables, and served it up with two bottles of
ale.

“You'd
go hungry without me around,” I said, and settled down at the
table. Reis huffed out a dry laugh.

“You're
supposed to feel sorry for me,” they said, patting the empty space
where their left thigh abruptly ended. “Practically
defenceless.”

I raised
my brow and they said, “Don't be bloody cheeky,” pointing their
chopsticks at me. Rolling my eyes, I sunk into the chair, and ate
with my bowl awkwardly propped atop my collarbone.

“I guess
Kouris still isn't back,” I idly commented between
mouthfuls.

“Wouldn't get your hopes up.”

Six days
had passed since she was supposed to return to Port Mahon, but
neither Reis nor I had succumbed to worry, just yet. There'd been
whole weeks where I couldn't account for Kouris' whereabouts, and
she always made it back, in her own time.

I
reached for my drink without sitting up, fingers stretching across
a gap of feet, and a knock at the door almost sent my dinner
tumbling all over my lap and the floor. Grabbing the bowl and
propping it on the edge of the table, I looked to the door and then
to Reis, quickly discerning that they weren't expecting
company.

Nobody
knocked at the door. Kouris least of all. If someone was there
unannounced, it meant trouble of one sort or another.

“Get
that for us,” Reis said, dragging their leg to the floor and
reattaching the straps to their thigh.

Doing as
they'd asked, I pulled the door open, more curious than afraid. I
was almost disappointed when I saw who it was.

A
cluster of five pirates had gathered outside of Reis' door. I
recognised all of them from the taverns and long days spent out at
sea, and they all looked more apprehensive than aggressive. Tae, a
woman with a phoenix's talon tattooed across the side of her face,
grinned sheepishly. For a woman who I'd once seen cut off another's
fingers for accidentally drinking out of her stein, she was far
from confident when it came to taking the lead.

“Oi oi,
Felheim,” she said, pushing herself onto tiptoes in an attempt to
look over me. “The Captain got a minute?”

“You
know how it works,” I said, not opening the door an inch wider than
I needed to. “You can't just come up here and bother
them.”

“Felheim!” Tae said, and threw her hands in the air. “Come
on, I thought we were friends! Do us a favour, alright? The
Captain's gonna want to hear this, trust me.”

Still
possessing an ounce of sense, I absolutely didn't trust Tae, but
knew she wouldn't have come here without good reason. The group in
front of me looked meeker than pirates rightly should, and quickly
averted their gazes when Reis stepped forward and pulled the door
all of the way open.

“What's
this all about, then?” they asked, leaning against the door frame.
They were met with a wave of silence. Tae no longer considered
herself the leader, and the other pirates waited for someone else
to speak. “Well? You know we've got a healer in town if someone
sliced out your tongues.”

“Captain!” Tae said, speaking up at the prompting of several
elbows to her ribs. “There are men in Mahon.”

“So?
There are always men in Mahon, acting as though we've never set
eyes on one of their kind before. Give 'em a few days to realise
that we ain't gonna stop being uninterested, or point 'em towards
the brothels for work. You know how this goes, Tae.”

“No, Cap.
Gavern's
men,” Tae stressed as Reis was in the process of
closing the door on her face. Reis paused, took a deep breath, and
the door creaked back open. “... swear to the gods, Captain, you
know none of us would bother you unless there was real trouble out
there.”

Reis
stared at them one after the other, rested their forearm against
the door frame, and let out a heavy sigh as they buried their face
in the crook of their elbow. At the mention of Gavern, my curiosity
turned into something a little more unsettling, and I glanced
across the beach to the town and its bright-burning fires, ears
straining to make out a hint of anything that was happening within
Mahon.

“Four
years. Four bloody years I've been dealing with this,” Reis said,
pushing off the door frame. “What's with all this, anyway? Gavern
sends his men here to frighten you, and you come running to me for
help. How do you lot reckon that's gonna look, huh?”

Not
giving anyone the chance to apologise or explain themselves, Reis
headed back into the hut, collected their cane and holstered their
flintlock pistol at their hip.

Reis
walked slower than almost anyone else in Mahon, and every other
step they took was a heavy one, but nobody so much as thought about
hurrying them on. They were in no rush to speak with Gavern's men.
If anything, they were content to leave them waiting, surrounded by
residents of Mahon and visitors alike.

In the
eighteen months I'd called Mahon home, Gavern had been the most
relentless of the pirate captains intent on taking Port Mahon for
themselves. His men would sabotage supplies on their way into port,
send out ships to strike down fishing boats and those leaving on
expeditions, and sometimes, assault the port head-on, cannons
blazing. Not once in all that time had I known him to send men into
town who weren't promptly cut down, which meant only one
thing.

They
were here to talk, to negotiate.

Gavern's
men had gathered in the centre of town, outside the old temple. It
had been built under Yin Zhou's orders when she founded Mahon, one
hundred and eighty-seven years back, but had been hollowed-out in
its old age, and market was held within it. Had Gavern's men chosen
to gather outside the newer temple, none would've taken the insult
lightly.

We passed
Siren
Song
, a tavern that ran the full length of
the street leading to the old temple, and I'd never seen the place
so empty. All had come to gather in the centre of town, young and
old alike, and everyone stood so wholly and terrifyingly silent
that I didn't understand how Gavern's men were managing to grin
quite so insufferably.

The
three of them were beyond pleased to have been chosen by Gavern for
the task, and the crowd parted for us at the sound of Reis' cane
clipping against stone.

Reis
stood in front of the men, hands folded atop their cane, and I sunk
into the front of the crowd as they refused to give Gavern's men an
inch.