Dreams from the Witch House: Female Voices of Lovecraftian Horror 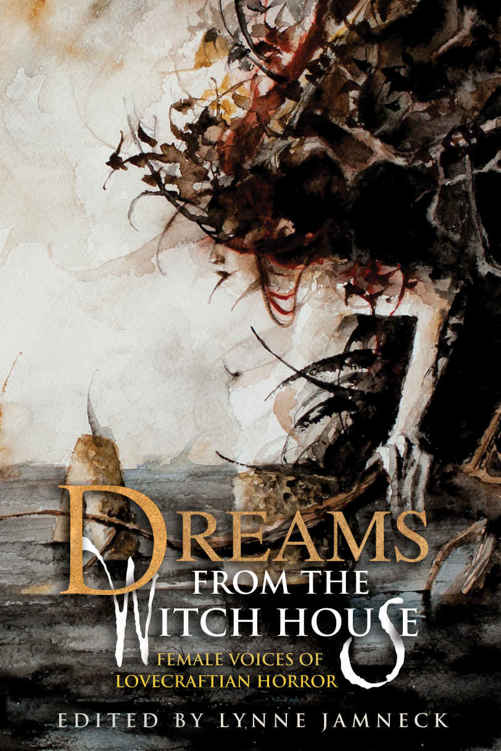 Dreams from the Witch House: Female Voices of Lovecraftian Horror

This is a work of fiction. All characters, events or organizations in it are products of the author’s imaginations or used fictitiously.

Shadows of the Evening © by
Joyce Carol Oates
.

First published in
Century
magazine (1998). Reprinted by permission of the author.

The Genesis Mausoleum © 2015
by Colleen Douglas

First published in
Sirenia Digest
#82 (2012). Reprinted by permission of the author.

The Child and the Night Gaunts © 2015
by Marly Youmans

All Our Salt-Bottled Hearts © 2015
by Sonya Taaffe

But Only Because I Love You © 2015
by Molly Tanzer

All Gods Great and Small © 2015
by Karen Heuler

Eye of the Beholder © 2015
by Nancy Kilpatrick

Down at the Bottom of Everything © 2015
by E.R. Knightsbridge

The Wreck of the
Charles Dexter Ward
© 2012
by Elizabeth Bear & Sarah Monette,

first published as a podcast; http://www.drabblecast.org

From the Cold Dark Sea © 2015
by Storm Constantine

The Woman in the Hill
Tamsyn Muir

The Face of Jarry
Cat Hellisen

The Child and the Night Gaunts
Marly Youmans

All Our Salt-Bottled Hearts
Sonya Taaffe

But Only Because I Love You
Molly Tanzer

Eye of the Beholder
Nancy Kilpatrick

Down at the Bottom of Everything
E.R. Knightsbridge

This can be a difficult question to answer. Certainly, a Lovecraftian narrative may include the places, spaces, people and
Things
that Lovecraft himself wrote about in his short fiction, novellas and poems. But despite the label that has been so intrinsically linked to one writer in particular, beyond Lovecraft lurks something more ambiguous, more ineffable, more
uncanny
than even Yog-Sothoth, Shub-Niggurath and Nyarlathotep. After all, no matter how difficult these names might roll off the human tongue, the creatures they describe have still been made concrete, rendered
identifiable
things and as such, we can quantify them.

The stories in “Dreams from the Witch House: Female Voices of Lovecraftian Horror” attempt in different ways to access this
beyondness
and relay it in a manner that can partially reveal the shadows that dwell on the periphery of our subconscious minds. In doing so, these twenty stories reveal that a ‘Lovecraftian’ story might not include any of the traditionally recognizable components we have come to expect from such a tale (though they do make brief appearances; as a bonus, you will also find out exactly who watches over The Tentacled one while he sleeps).

The cosmological nature of Lovecraft’s work allows authors to employ subject matter that is wide in scope. Nonetheless, throughout the stories in “Dreams from the Witch House”, it becomes clear that, in contemporary Lovecraftian narratives, one aspect has become particularly terrifying – that’s right, look in the mirror, you will see it there. Of course, perceiving ourselves as our own worst enemy is not a psychically easy task. Just like Danforth in “At the Mountains of Madness”, we place ourselves at risk of psychological schism when we dare look at what is behind us, or more presently,
inside
us.

Why a collection of contemporary Lovecraftian stories written by women? The evidence for answering this question is there for anyone to see; simply review the Table of Contents from Lovecratian-inspired anthologies over the past number of years (and there are many) and it becomes evident that the bulk of contributions published in these collections were written by men. Here, some draw what seems to them an obvious conclusion –
women simply don’t write Lovecraftian fiction
. Of course, anyone who has consistently read both Lovecraftian and horror fiction in general will know that this is not the case.

Perhaps it is simply that women write the Lovecraftian differently than many of their male counterparts traditionally have. There is something extremely
human
about the stories included here and in Lovecraft, the focus has often been on the
non-human
; even in stories where tentacled and many-eyed gods only make their appearance on the last few pages, stories often doggedly build toward the reveal of these creatures from the very start, making this essentially their
raison d'être
for being told.

The stories in “Dreams from the Witch House” celebrate humanity, both the good and bad.

Fear, greed, curiosity, uncertainty, terror, revulsion – all of these traits and more arise within the stories contained here. Yet they evidence confrontations with terror and the subsequent outcomes of these conflicts that in many ways feel more decisive than Lovecraft’s penchant for having his protagonists succumb to madness. What is more terrifying—giving in to insanity, where the mind erects a protective wall between reality and psyche, or processing terror rationally and accepting it as part of reality?

Bela Lugosi was purported to have said, ““It is women who love horror. Gloat over it. Feed on it. Are nourished by it. Shudder and cling and cry out-and come back for more.” This female feeding-on and return to the horrific is another interesting notion for reflection where Lovecraft is concerned. Consider that ultimately (with some exceptions), the Lovecraftian seeker after truth often finds himself inevitably overcome by insanity, an affliction that can be viewed as a final separation of what it means to be human. In Lovecraft, as verified by the Providence writer’s masterful use of intensifying dread toward an inevitable narrative conclusion, a return to horror is not a willing one; and when such a return does occur, it is generally as something no longer human, as in “The Shadow Over Innsmouth”. It is therefore interesting to note that the kind of “gibbering madness” so often found in Lovecraft is not in evidence here; characters
do
question themselves, their behaviours and motives, but the slip into uncontrollable madness is much less obvious here. Do women have a greater capacity for absorbing the horrific? Interestingly, among the stories here, a story that comes closest to exemplifying Lovecraft’s blend of insanity is told from a male perspective…

As noted, not all of the stories collected here are told from female perspectives and this offers yet another thought-provoking diversion in terms of how Lovecraft approached the Weird; we know he rarely included female characters in his stories, and even when he did, they were at best underdeveloped, serving mostly as catalysts for the horrific elements that would come to bear themselves out on the male psyche. Did Lovecraft intentionally eschew female perspectives in his work (for whatever reason), or had he simply not known
how
to write them, how to project their perceptions of the horrific within the context of his own mythos?

Regardless of such speculations, some of the most exciting Lovecraftian fiction is currently being written by women. Contemporary Lovecraftianism is moving away from the Elder Old Guard who – though they will always remain an essential backdrop to Lovecraft’s expanded universe – are perhaps in some ways becoming as stifling to diverse perspectives of the unnameable as Lovecraft’s own views on a number of topics. “Dreams from the Witch House: Female Voices of Lovecraftian Horror” aims to magnify the scope in which writers can express terror when paying homage to “The King of Weird”, as Joyce Carol Oates refers to Lovecraft in a 1996 essay. The cultists have moved into the 21
st
century where new horrors await. The grimoires need updating, or we face the prospect of fighting horrors that we may have been able to defeat, were it not for a case of short-sightedness.