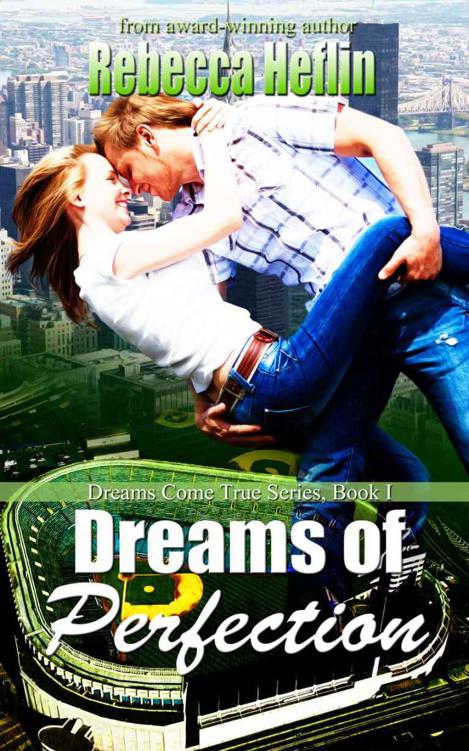 This book is a work of fiction.  The names, characters, places, and incidents are the products of the author’s imagination or are used fictitiously.  Any resemblance to actual events, business establishments, locales, or persons, living or dead, is entirely coincidental.

All rights reserved.  No part of this publication may be reproduced, stored in a retrieval system, or transmitted in any form or by any means (electronic, mechanical, photocopying, recording, or otherwise) without the prior written permission of both the copyright owner and the publisher.  The only exception is brief quotations in printed reviews.

The scanning, uploading, and distribution of this book via the Internet or via any other means without the permission of the publisher is illegal and punishable by law.  Please purchase only authorized electronic editions, and do not participate in or encourage electronic piracy of copyrighted materials.

You ignited the dream.

Many thanks to my ensemble of beta readers: Lynda, Yvonne, Susan, Renee, Paul, and of course, Ron. Your feedback is invaluable. And Ron, thanks for advising me on all things Yankees.

I’d like to thank my beautiful my niece, Sole, who served as my guide to all things hip in New York City.

To my fashionista friend, Nina, thanks for keeping me up-to-date with fashion’s most popular designers.

Thanks to Joan for submitting the winning worst first date story to my Best Worst First Date Story Contest! I hope you enjoy seeing your story in print.

Thanks to my fabulous editor, Debby, for her continued support and encouragement.

Finally, thanks to my readers. You keep the dream alive.

“It is absurd to look for perfection.”

Darcy Butler sat across the table from her blind date in a trendy new SoHo restaurant contemplating the fact that he was no Blake Garrett. Blake was . . . perfect. But why wouldn’t he be? After all, she’d created him.

Listening with half an ear, she nodded at something he said. Her date was handsome, polite, successful, charming even. He had good taste in food, wine, and from the looks of his expensive suit, clothes as well. But the comparisons continued, and she found him lacking at every turn. Robert, or Russell, or something that started with an ‘R’ asked her a question.

She could hear her mother’s well-deserved admonishment.
He’s buying you dinner. The least you can do is remember his name.

“What do you like to do with your free time?” He gazed into her eyes, clearly trying to make a connection.

“I love going to Yankees’ games,” she said, excited that the season started that week.

“Yeah, do you like baseball?” Her excitement rose at the prospect of finding a fellow baseball lover. Provided, of course, his loyalties didn’t run in the wrong direction.

“No. I find baseball boring. Too much standing around. I prefer boxing or hockey, something with a little action.”

Okay—first—baseball boring? Her excitement fell in proportion to the rise in her blood pressure. Second, boxing? Hockey? Where guys beat the crap out of each other? Did she want to date a man with a proclivity for violence?

All right, all right. Down, girl.
Maybe she could educate him on the subtleties of baseball, the beauty of a breaking ball, the rarity of a no-hitter, the excitement of a bottom-of-the-ninth-down-by-three-full-count-with-two-outs-and-bases-loaded game. Help him see the light.

The clatter of silverware against china, the clink of glasses, and the low hum of conversation from other diners did nothing to diminish the uncomfortable silence that descended. “So”—he cleared his throat—“Laura tells me you’re a writer. What do you write, fiction, non-fiction? Murder mysteries? I love a good murder mystery.”

He signaled to the waiter for another gin and tonic. His third so far, but who’s counting?

“No, I write romance.”
Was that an eye roll?

“Seriously?” he asked, his highball glass poised halfway to his mouth.

That was definitely an eyebrow lift, and not the wow-that-intrigues-me sort of lift, but the you-can’t-be-serious sort of lift. “Yes, really. I’m a
New York Times
and
USA Today
best-selling romance author,” she said, with no small amount of pride in her voice. “In fact, my latest book,
The Doctor’s Dilemma
, will be out in a few months.”

“You seem surprised, and not pleasantly.” She tilted her head.

“Well, I mean,” he stammered, “Laura said you had a B.A. in Creative Writing from Columbia, and, well, using it to write books about half-naked men and heaving bosoms seems . . . a waste.” He made no further attempt to hide the disdain in his voice.

Her blood pressure soared, not to mention her temper. She set down her glass of Chardonnay so she could make her point without the risk of throwing the wine in his face, and propping her elbows on the table, leaned forward.

“Romance is serious business. Did you know that romantic fiction has the largest share of the U.S. consumer market? That romantic fiction generated over one billion, that’s
billion
with a ‘
b
,’ dollars in sales last year? That almost seventy-five million people read at least one romantic novel a year? And that includes men.”

He held up his hands in surrender. “Okay, okay. I get it. It’s a money thing.”

“No, it’s not a
money thing
,” she replied with a dash of snark. “I happen to love what I do. And so do my fans. All three hundred thousand of them.”
Wow, I really need to get a grip.
She’d caught the unwelcome attention of neighboring diners.

Mr. R.—and ‘R’ didn’t stand for ‘Right’—glanced around as if seeking the closest exit. His phone rang—one of those sultry sax tones—and from the look on his face, he welcomed the interruption. Excusing himself from the table, he stepped outside to take the call.

Darcy snatched up her phone and texted Laura, the instigator of this blind-date-gone-wrong.

He hates baseball. How could u?

How am I supposed to know he hates baseball? And who cares? He’s cute! And rich.

Darcy dropped her phone into her purse as Mr. R. approached the table.

She couldn’t tell if he was lying or not, but if he was, he got an ‘A’ for creativity. Either way, she didn’t care. The evening couldn’t end soon enough as far as she was concerned. “Well, congratulations.”

Darcy stood as he tossed a hundred dollar bill down on the table. “This should take care of it. I’m really sorry. Good luck with your new book.” And with that, he left.

Well, another one bites the dust. She sat back down with a sigh, before signaling the waiter. “I’ll have a Grey Goose Cosmo, and the Ahi tuna salad, with the dressing on the side. Oh, and the melting chocolate cake for dessert.” Since Mr. R. was buying, she might as well eat.

Darcy tapped on the door as she jiggled the
key in the lock. “It’s me,” she called out as she entered.

“Well thank God for that, since it could have been any one of the other hundred people who have a key to my apartment.” Josh Ryan didn’t bother getting up from his prone position on the couch. “How’d you know I’d be home?”

“It’s Wednesday night. You never miss an episode of
Survivor.
” Darcy dropped her purse and keys on the kitchen table before opening the refrigerator in search of her favorite diet soda. “God, my feet are killing me.” She slipped off her shoes and padded into the living room.

“What do you expect? Walking around in those stilts?” Josh picked up the remote and paused the TV, before sitting up. He raked his hands through his tousled dark brown hair and turned his attention to Darcy. “So, what’s up?”

Darcy plopped down into an oversized leather chair next to the sofa and draped her bare legs over the arms. “Oh, you know. Another blind date.” She grimaced, then took a sip of her soda.

“You’re a glutton for punishment,” he said, shaking his head. He plucked the soda can from Darcy’s fingers and took a generous pull, made a face, and handed it back to her. “How do you drink that stuff?”

Taking the can, she shrugged. “I’m a girl. Anyway, Laura made him seem so great.” Her voice sounded petulant, even to her own ears.

“The fact that Laura set you up should have been your first clue.” Josh sighed, propping his elbows on his knees, and hanging his head. He lifted his head and quirked an eyebrow at her, his warm brown eyes glittering with amusement. “What was wrong with this one?”

“Don’t look at me like that. He hates baseball. And he disparaged my profession. You know I couldn’t date anyone who didn’t love baseball
and
respect my writing.”

“Okay. Mr. Right isn’t Mr. Right unless he loves baseball and supports your work. But why the desperate rush? How many dates have you been on the last two months, anyway?”

“You mean how many
first
dates? Fifteen, if you count that musician from the East Village.” She grimaced. Shaking the now-empty soda can, she frowned. “According to mathematical theory, I should have found my love match three dates ago.”

Josh snorted. “I repeat, why the rush?” He rose, and, taking the can from her, headed to the kitchen. “Want another?” he called.

“No.” Darcy heard him pop the top on another soda. Why the reluctance to tell Josh the reason for her all-out hunt for Mr. Right? She’d always been able to tell him anything, even the gory details of Doug’s infidelity.

Perhaps because she could barely admit it to herself. She, writer of nine best-selling romances, couldn’t lay claim to a romance of her own. Now, here she was just six months shy of her thirtieth birthday, and not a Prince Charming in sight.

Josh resumed his seat on the sofa, munching on a pretzel, and gave her a direct look. “Ms. Butler, please answer the question.”

She huffed out a breath. “It’s just that, well, you know what happens this October.”

“The Yankees win the World Series,” he said, his face earnest.

“Well, that, too. But I’m talking about my birthday.”

Darcy tried to hide her embarrassment by rustling the bag in search of a pretzel, then taking the soda can from Josh’s hand to take a sip. “Like a time bomb in an episode of
24
.” She shuddered and glanced at the can of regular soda in her hand. “How do you drink this stuff?”

“I’m a guy.” He reached out and tugged on her well-manicured big toe with its sin-city-red nail polish. “Darcy, you can’t force chemistry or love. It’ll happen when you least expect it.” Josh stood, grabbed the half-eaten bag of pretzels from her, and leaned over to buss her forehead before heading back to the kitchen.

“I create chemistry all the time. Every time I write a novel. Why can’t I create a little in my own life?” Darcy sulked.

“Oh, hey, speaking of novels”—Josh dropped down on the sofa, clearly leading the witness in another direction—“did you figure out that sticky plot problem?”

“That’s too bad. I really liked him.”

Still sad over Ken’s demise, she shook her head then flashed Josh a smile. “Anyway, are we still on for the Yankees season opener Friday?”

“Do the Yankees hate the Red Sox? Now, get out of here so I can find out who gets voted off this week.”