Read Dressing Up for the Carnival Online

Dressing Up for the Carnival 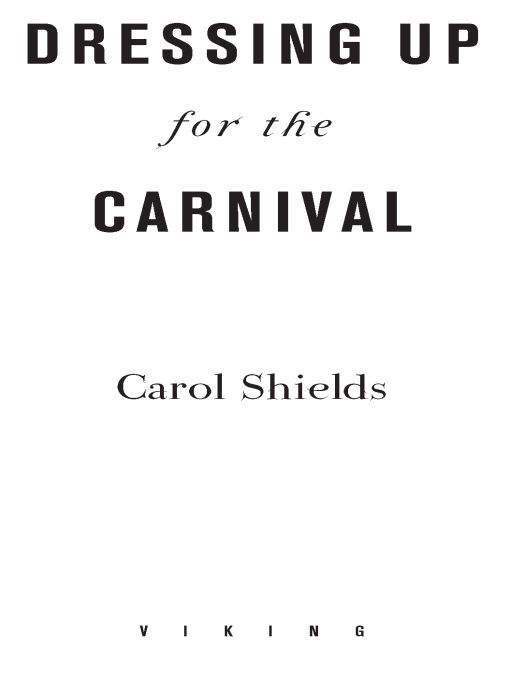 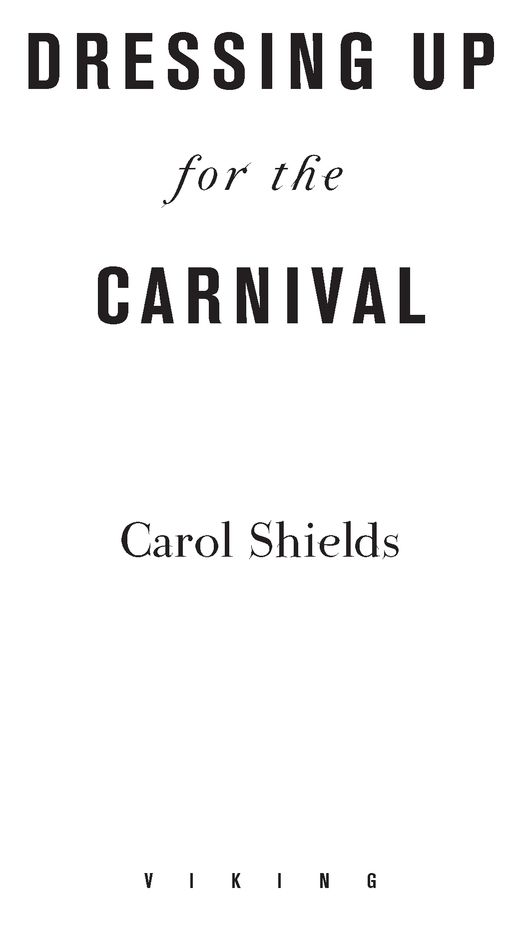 VIKING
Published by the Penguin Group
Penguin Putnam Inc., 375 Hudson Street,
New York, New York 10014, U.S.A.
Penguin Books Ltd, 27 Wrights Lane,
London W8 5TZ, England
Penguin Books Australia Ltd, Ringwood,
Victoria, Australia
Penguin Books Canada Ltd, 10 Alcorn Avenue,
Toronto, Ontario, Canada M4V 3B2
Penguin Books (N.Z.) Ltd, 182-190 Wairau Road,
Auckland 10, New Zealand
Penguin Books Ltd, Registered Offices:
Harmondsworth, Middlesex, England
Copyright © Carol Shields, 2000
All rights reserved
“Dressing Up for the Carnival” appeared in
Malahat Review;
“Weather,” “The
Harp,” and “Keys” in
Story;
“Dying for Love” and “Soup du Jour” in
West Coast
Review;
“Ilk,” “Mirrors,” and “Reportage” in
Prairie Fire;
“Our Men and Women” in
North Dakota Quarterly;
“Absence” and “Death of an Artist” in
Event;
“New Music”
in
BBC Music Magazine;
“The Next Best Kiss” in
Atlantic Monthly;
“A Scarf ” in
The Financial Post Magazine;
and “Dressing Down” in
Saturday Night.
“Flatties:
Their Various Forms and Uses” was published in a chapbook for the Harborfront
International Writers Festival; “Stop!” in a chapbook,
Drop Out;
and “Eros” in an
anthology,
Feeling the Heat
(Douglas & McIntyre, Vancouver).
PUBLISHER’S NOTE
These selections are works of fiction. Names, characters, places, and incidents
either are the product of the author’s imagination or are used fictitiously, and
any resemblance to actual persons, living or dead, business establishments,
events, or locales is entirely coincidental.
LIBRARY OF CONGRESS CATALOGING IN PUBLICATION DATA
Shields, Carol.
Dressing up for the carnival / Carol Shields.
p. cm.
eISBN : 978-1-101-16185-2
Without limiting the rights under copyright reserved above, no part of this
publication may be reproduced, stored in or introduced into a retrieval system, or
transmitted, in any form or by any means (electronic, mechanical, photocopying,
recording or otherwise), without the prior written permission of both the copyright
owner and the above publisher of this book.

Night at the Vulcan by Ngaio Marsh
Save the Cat! by Blake Snyder
Touch of the Clown by Glen Huser
Flying Shoes by Lisa Howorth
The Italian Billionaire's Disgraced Fiancée by Swann, Betsy
Tristan's Loins by Karolyn Cairns
Once Upon A Highland Christmas by Sue-Ellen Welfonder
Manhunting in Mississippi by Stephanie Bond
Once a Rebel... by Nikki Logan
The Ice Princess by Camilla Läckberg