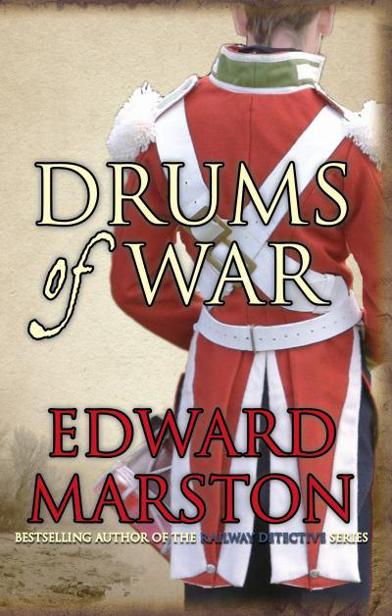 Edward Marston
was born and brought up in South
Wales. A full-time writer for over thirty years, he has worked in radio, film,
television and the theatre, and is a former Chairman of the Crime Writers' Association.
Prolific and highly successful, he is equally at home writing children's books
or literary criticism, plays or biographies, and the settings for his crime
novels range from the world of professional golf to the compilation of the
Domesday Survey.
Drums of War
is the second in a new series of
adventure novels featuring Captain Rawson.

Daniel
Rawson saw him coming. From his vantage point high up in the tree, he could
command a view that stretched for almost a mile. With the aid of his telescope,
he was even able to identify the man's regiment. The rider had a blue
knee-length coat with red cuffs. He wore a cravat, a tricorne hat and black
leather boots that glistened in the sun. The weapon holstered beside him was a
rifled carbine. Daniel knew that he must therefore belong to the
Royal-Carabinier corps. The horse was keeping up a steady canter, its hooves
sending up clouds of dust from the dry track. At that pace, it would reach
Daniel within a matter of minutes. It was time for him to climb down to a lower
branch.

Though
he was a captain in the 24
th
Foot, a seasoned British regiment
engaged in fighting Louis XIV's mighty army, he was not in uniform now. Indeed,
he would have been unrecognisable to most of his fellow-soldiers. Dressed in
the nondescript garb of a French peasant, he'd grown a beard, dirtied his face
and found a cap that hung low across his forehead. Since he was fluent in
French and had the broad shoulders of someone accustomed to hard labour, he was
confident that nobody would see through his disguise. What set him apart from
other churls was that he had money in his purse and weapons under his smock. He
also had a pretty accomplice.

When
the rider got closer, Daniel gave the signal and Marie nodded in reply. Picking
up her basket, she came out of her hiding place in the copse, walked across to
the track and began to saunter along it. She was young, fresh-faced and buxom.
Her long brown hair trailed down her back from beneath her bonnet. As her hips
swayed rhythmically, her skirt swished to and fro. Hearing the clack of hooves
behind her, Marie stopped and turned. The rider came round the angle of the
trees and she had her first sight of him. He was tall in the saddle and, from
what she could tell, passably handsome. The closer he got, the broader became
her smile. He, in turn, was appraising her carefully and he liked what he saw. He
took her for a farmer's daughter on her way to market in the next village. She
stood obligingly aside as if to let him go past but - urgent as his business
was - he felt that he could tarry for a short while. It was too good an
opportunity to miss.

He
slowed his horse to a trot and gave her a friendly greeting. Marie giggled in
reply and flashed her eyes. It was all the invitation he needed. Tugging the
animal to a halt, he dismounted, removed his hat and enjoyed a long, luscious
kiss. Her lips were sweet and warm. He looked around to make sure that they
were alone. The place seemed utterly deserted. Marie led him to the shelter of
the trees. After tethering his mount, he discarded his hat, removed his sash
then took off his coat. Tumbling a country wench on a bed of green grass was
just the fillip he needed after several hours' ride on a hot day. She was
clearly willing and far too wholesome to be a whore. He would not even have to
pay for her favours. Setting her basket aside, she put her hands on her hips.
When she giggled again, her breasts trembled irresistibly.

Daniel
waited until the trooper lowered his breeches. It was the moment when his
quarry was completely off guard and at his most vulnerable. Eyes fixed on the
girl and loins already on fire, the man did not hear the branch creak or the
leaves rustle above his head. Daniel timed his jump perfectly, hitting his
target with such force that he knocked all the breath out of him, and using the
butt of his pistol to club the man into unconsciousness. Letting out a gasp of
fear, Marie turned away, horrified at the sudden violence. There had been no
mention of murder when she agreed to help Daniel. He had told her that it was
merely a jest played on an old friend yet he had just struck the so-called
friend on the head. She could not bear to watch and was frightened that she
might also be in danger.

Working
swiftly, Daniel stripped the man of his remaining clothes then tied him
securely to a tree with some rope he'd concealed nearby. When Marie dared to
look again, she saw that the trooper she'd enticed from his horse was now bound
and gagged, seated upright against a trunk with his head slumped forward on to
his chest. What really caught her eye and banished her anxiety at once,
however, was the fact that Daniel was naked from the waist up, clearly
intending to put on the man's shirt and coat. She studied his slim, smooth,
lightly tanned, muscular body with gathering interest. He was so different from
the potbellied oafs she served at her father's inn. Though it bore the scars
of war, his physique was truly impressive, hardened by combat and combining a
sculptured beauty with latent power. Marie was roused and entranced. She forgot
all about the victim of the assault. Her mind was on something else now. As Daniel
reached for the shirt, she raised a hand.

'Don't
worry,' he said, taking some coins from his purse. 'I always honour a debt. You
did well, Marie. Here's your reward.'

'I
care nothing for the money, good sir.'

'But
you earned it.'

'Begging
your pardon, sir, I'd rather take my wages another way.'

'Then
you shall have my horse - I need to ride his.'

'I
want neither payment nor the horse,' she said, stepping a little closer.

'Then
what can I give you?' Even as he asked the question, he guessed the answer.
Daniel grinned happily. 'Ah, I understand now.'

He
had chosen the ideal accomplice. When he had spent the night at a nearby inn,
Daniel sensed that Marie would be able to help him. She was comely and eager.
He had told her a plausible tale about playing a trick on a friend in the army.
Dressing up as a peasant, he'd explained, was all part of the jest. All that
he'd hired her to do was to cause a distraction and she'd done that with
surprising skill, unaware that she was actually assisting the enemy in the
theft of royal dispatches. The giggle that had bewitched the trooper was now
directed solely at Daniel and it was very tempting. As it grew louder, her
whole body shook with sheer delight. Marie spread her arms wide to claim her
reward, at once offering herself and pleading to be taken. Daniel needed only a
second to reach his decision. Having got what he wanted, he could afford a
little distraction.

'Let's
find somewhere more private,' he said, glancing at his captive. 'We don't want
to make him jealous, do we?' 'Confound it!' exclaimed the Duke of Marlborough,
pacing up and down. 'Can there be anything worse than leading a coalition army?
I'm fighting with one arm tied behind my back and both feet lashed together.
Bickering and delay will be the ruination of me. I'm not allowed to move one
solitary inch without a council of war beforehand.'

'The
Dutch are awkward bedfellows, Your Grace,' agreed Cardonnel.

'They're
the bane of my life, Adam. But for their caution, we could have won a decisive
action on the Moselle and occupied French soil. We could have been giving
nightmares to King Louis. Instead of that, we're back where we started.'

'The
blame cannot be laid entirely on the Dutch.'

'No,'
said Marlborough, heaving a sigh. 'We also have to contend with the problem of
the Margrave of Baden. I ride all the way to see him in order to apprise him of
my plans and what does he tell me? Not only is he unable to supply me with
wagons, guns and horses but his wounded foot makes it impossible for him and
his men to undertake the siege of Saarlouis. Yet another project has to be
abandoned.'

'It's
very frustrating, Your Grace.'

Marlborough
and Adam Cardonnel were alone in the tent that acted as their headquarters. It
was only because he could trust his secretary that Marlborough was able to vent
his anger so openly. Most of the time, he had to conceal it behind soft words
and a polite smile. As commander-in-chief of the Confederate army, he was
hampered at every turn by his supposed allies. His triumph at the battle of
Blenheim the previous year had sent tremors through France and been marked by
wild celebrations in England, Austria, Germany and Savoy. Even the Dutch hailed

Marlborough
as a hero, though praise was tempered with criticism of the high number of
casualties among their regiments. On his return to England in December, he was
greeted by cheering crowds and honours were heaped upon him.

When
1705 dawned and the campaigning season neared, there was justifiable optimism
in the air. It was felt by many that Marlborough would build on the success of
Blenheim, achieve other startling victories in the field and bring the War of
the Spanish Succession to an end on terms dictated by the Allies. Optimism,
however, was short-lived. The first setback occurred during the voyage to the
Netherlands in April. Caught in a squall, Marlborough's yacht ran aground on
the sandbanks of the Dutch coast. He had to endure a gruelling four-hour pull
in an open boat against wind and tide. There were moments when it looked as if
the elements would destroy a man who had survived fierce battles against the
finest army in Europe. He was fortunate to reach dry land alive. The ordeal
left him with a fever and a pounding headache.

There
was worse to come. When he reached The Hague, he found the Dutch army unready
to take the field and unwilling to fight far beyond its immediate borders.
Always thinking ahead, Marlborough had arranged during the winter for his
supply depots to be fully stocked so that his army never had to forage while on
the march. To his dismay and fury, he discovered that the depots were
half-empty owing to neglect, corruption and betrayal. Instead of being able to
nourish his army's advance up the Moselle, his depleted stores were a huge
problem. There were few opportunities to forage in the stark countryside and
unseasonably cold weather was another distinct hazard. Marlborough complained
bitterly that they were much more afraid of starving to death than of the
enemy.

The List by Karin Tanabe
Bones for Bread (The Scarlet Plumiere) by Muir, L.L.
The Killing Room by Richard Montanari
The Lonely Hearts Club by Radclyffe
Animal Magnetism by Shalvis, Jill
White Tiger on Snow Mountain by David Gordon
The Moonstone and Miss Jones by Jillian Stone
A Heart Revealed by Josi S. Kilpack
Frozen Charlotte by Priscilla Masters
The Dominion Key by Lee Bacon