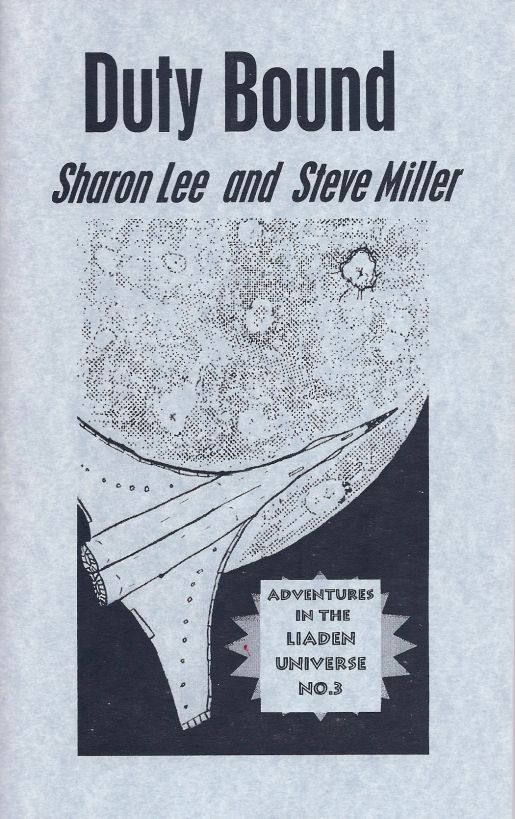 Adventures in the Liaden
Universe
®

This is a work of fiction. All the characters
and events portrayed in this novel are fiction or are used
fictitiously.

Copyright
©
1999, 2011 by
Sharon Lee
and
Steve Miller
. All rights
reserved. No part of this publication may be reproduced or
transmitted in any form or by any means, electronic or mechanical,
without permission in writing from the author. Please remember that
distributing an author's work without permission or payment is
theft; and that the authors whose works sell best are those most
likely to let us publish more of their works.

Discover other titles by Sharon Lee, Steve
Miller, and Sharon Lee and Steve Miller at Smashwords

This ebook is licensed for your personal
enjoyment only. This ebook may not be re-sold or given away to
other people. If you would like to share this book with another
person, please purchase an additional copy fo reach recipient. If
you're reading this book and did not purchase it, or it was not
purchased for your use only, the please return to Smashwords.com
and purchase your own copy. Thank you for respecting the hard word
of this author

MASTER PILOT VEN'DUCCI sighed and folded his
hands on the practice board. By these signs, Er Thom knew himself
to be in desperate straits.

"I had heard from Captain yos'Galan," the
master said quietly, "that you had achieved a level of skill equal
to that of a second class pilot, Perhaps I misunderstood?"

Er Thom inclined his head respectfully. "In
fact, sir, I have achieved my second class license."

The Master's eyebrows rose, as if in
astonishment. "Have you, indeed? Show it, of your kindness."

Now he was in for it in truth. A short
series of keystrokes from the board at which they sat, and Master
ven'Ducci could transform the treasured second class license into a
mere third class--or into no license at all. Such was the power of
a master pilot.

Still, it would reflect poorly on his
melant'i--and on the melant'i of the Captain his mother--if he were
seen to either flinch or hesitate in the face of this order. Er
Thom neither flinched nor hesitated, but pulled the card from its
slot in the practice board and held it out to his instructor in
fingers that were, amazingly, steady.

Master ven'Ducci received the license
gravely and subjected it to a leisurely, frowning study, as if he
had never seen such a thing before. Er Thom folded his hands
forcibly in his lap and set his tongue between his teeth, lest he
be tempted to blurt out any of the defenses of his own skill that
were rising in his throat.

Halflings defended before
they were attacked, and he, Er Thom yos'Galan, was not a halfling.
He was a pilot of Korval. Specifically, he was a
second class
pilot of
Korval, the license fairly earned on the same day that Daav his
foster-brother, boon comrade and fiercest competitor, received
his
provisional
second class.

Master ven'Ducci finished his inspection and
laid the license on the edge of the board.

Er Thom took a careful breath, and met the
man's eyes with what he hoped was grave calm.

"I came by it at Solcintra Pilot's Hall, on
Banim-Seconday in the first relumma of the current year." He had
more than one cause to remember the day well, though very nearly a
full Standard Year had passed. Er Thom licked his lips, hands
stringently folded upon his knee.

"Testing that day established me as a second
class pilot. Master Hopanik signed the license herself."

Er Thom felt his face heat,
his fingers tightening convulsively. He
would
be calm, he told himself
sternly. He would.

Master ven'Ducci picked up Er Thom's license
and held it in his palm as if weighing it for merit.

"It is sometimes the case," he said, in the
mode of instructor to student, "that the exhilaration of the test
itself will call forth heightened response from a candidate. The
results of such testings are not invalid so much as misleading. It
may well be, young sir, that your proper rating at this time is
second class provisional. It is certainly true that your results at
these boards, over the time we have been working together, falls
significantly short of the results one is accustomed to receive
from solid second class pilots."

Er Thom bit his tongue, refusing to beg. If
he was a failure, if he lost his license this moment and spent the
rest of his life balancing cargo holds, he was yet the son of Chi
yos'Phelium --of Petrella yos'Galan. He would not shame his
Line.

"So." Master ven'Ducci glanced at the
license and slid it into the pocket of his vest. Er Thom's stomach
twisted, but he sat still, and, gods willing, showed no
distress.

"I will consider the proper course to chart
from this circumstance," the master pilot said. "Attend me here
tomorrow at the usual hour."

"Yes, Master." Somehow, Er Thom managed to
stand, to make his bow and walk, calmly, from the inner bridge.

He was scheduled for dinner this hour, and
his mother the Captain had made it plain during his first few days'
service that she rated moody, self-indulgent boys who skipped meals
just slightly lower than Port panhandlers too lazy to apply
themselves to a job.

Er Thom swallowed and deliberately turned
his back on the hall that would eventually lead him to the
cafeteria. He could not possibly eat. He swallowed again, blinking
back tears.

His license. He
was
a second class pilot!
The tests had not been in error! If only--

If only he could speak to Daav! If only his
foster mother, Daav's true-mother and twin sister to Er Thom's
mother the Captain--if only Chi yos'Pheliurn were here. But, of
course, she wasn't. He had neither seen nor spoken with her since
the day he had won the license.

He had always known that
his true-mother would one day claim him to serve on
Dutiful Passage
and learn
his life-roles of captain and trader, just as he had always known
that Daav would someday leave home to attend Scout Academy. He had
simply been caught ...unprepared... when "one day" became "this
day," and he was suddenly swept into his mother's orbit, away from
everything that was usual and comforting; his one cold joy the new
license in his pocket, which proved him a pilot of
Korval.

It was no inconsiderable thing to be a pilot
of Korval. Indeed, he had learned that it was no small thing to be
cabin boy on the Clan's flagship, true-son and heir of Captain and
master Trader Yos'Galan. The child of generations of space-goers,
Er Thom had adjusted easily to his duties and to ship-life. He had
adjusted less easily to the absence of his foster-brother, who had
been within his arm's reach for the sum of both their lives. Er
Thom's earliest memory was of gazing into his brother's face,
watching the black eyes watch him in return.

"Good shift to you, young sir."

Er Thom gasped, jolted out of his misery by
the quiet greeting, and hastily bowed--junior to senior--to
Mechanic First Class Bor Gen pin'Ethil.

The mechanic considered him out of wide gray
eyes. "One remarks that it is the dinner hour," he said
delicately.

Er Thom gritted his teeth and bowed again.
"One also marks the hour," he said, politely. "However, there is--a
book--in one's quarters..."

"Ah, but of course." A smile showed briefly.
"A cabin boy must always be at study, eh?"

"Just so," Er Thom said and bowed a third
time as the other passed by.

Legs none too steady, Er Thom went on, and
very shortly thereafter laid his palm against the plate set into
the door of his cabin.

He felt the scan crackle across his skin,
then the door slid open. He all but jumped through, the lights
coming up to show a stark little cubicle made smaller by the
built-in folding desk, which was extended to its fullest, and
overladen with books, readers, and clipboards. The slender bed was
tucked under the lockers in which the rest of his clothing and
possessions were stowed, the bed itself occupied by a long, thin
figure dressed in a dark long sleeved shirt, vest and leggings of
black space leather, booted feet crossed at the ankle, hands
crossed over his belt.

Er Thom stared, not quite daring to believe
the rather solid evidence before him.

The black eyes opened, the dark head moved
on the pillow, and the familiar, beloved smile infused the
sharp-featured face with beauty.

"Hullo, denubia," he said, swinging his long
legs over the edge of the bed and sitting up. "What's amiss?"

Er Thom stared, the skin of his palm still
tickling with the after-effect of the scan.

"How," he demanded, rather faintly, "did you
get here?"

"Oh, there's nothing to that!" Daav told
him. "I can show you the trick, if you like." He tipped his dark
head, mischief glinting. "Own that you're glad to see me, beast, or
I shall be inconsolable."

"Yes, very likely," Er Thom retorted
reflexively, then laughed and threw his arms wide. "In truth, I was
just wishing for you extremely,"

"Well, there's a proper welcome!" Daav rose
and flung himself into the embrace with a will. For a moment, they
clung, cheek to cheek, arms each about the other. Er Thom stepped
back first.

"To the
Passage
you mean?" He moved his
shoulders. "I cast myself at the feet of an elder Scout, who was
bound for this quadrant." Mischief glinted again. "Surely you don't
think I walked?"

"But, the Academy..." Er
Thom gasped, suddenly struck with a thought almost too horrible to
contemplate. "You haven't--they never
rusticated
you?"

"Rusticated me?" Daav
looked properly outraged. Which of course proved nothing.
"Certainly they did not
rusticate
me! Of all the notions! I suppose you've never
heard of term break?

"Term..." Er Thom blinked, counting the
relumma backward, and sighed. "I never thought of it," he
confessed. "But, surely, our mother..."

"Gave her leave, saving only that I find my
own way out and back and that I arrive early to my first class at
break-end." Suddenly, Daav stretched, and put a hand on his lean
middle. "What's the nearest hour for a meal, brother? I'm not
halfway hungry."

Well, and that was no surprise. Er Thom
sighed and tried to look stern.

"As it happens, I'm scheduled for dinner
this hour. Perhaps I can convince the cook to give you a few dry
crackers and a glass of water."

"A feast!" Daav proclaimed gaily, and slid
his arm through Er Thom's, turning them both toward the door.
"Come, let us test your powers of persuasion!"

"TOOK YOUR LICENSE?" Daav stared, soup spoon
halfway to his mouth. It was his second plate of soup. The first
had vanished with an alacrity unusual even by Daav's standards, and
Er Thom suspected that the elder Scout had not been over-generous
with rations, "Pray, what profit comes of taking your license?"

Er Thom moved his shoulders and looked down
at his plate. He had made some inroads into his own meal--at least
he would not be called to book for neglecting his duty to stay
healthy.