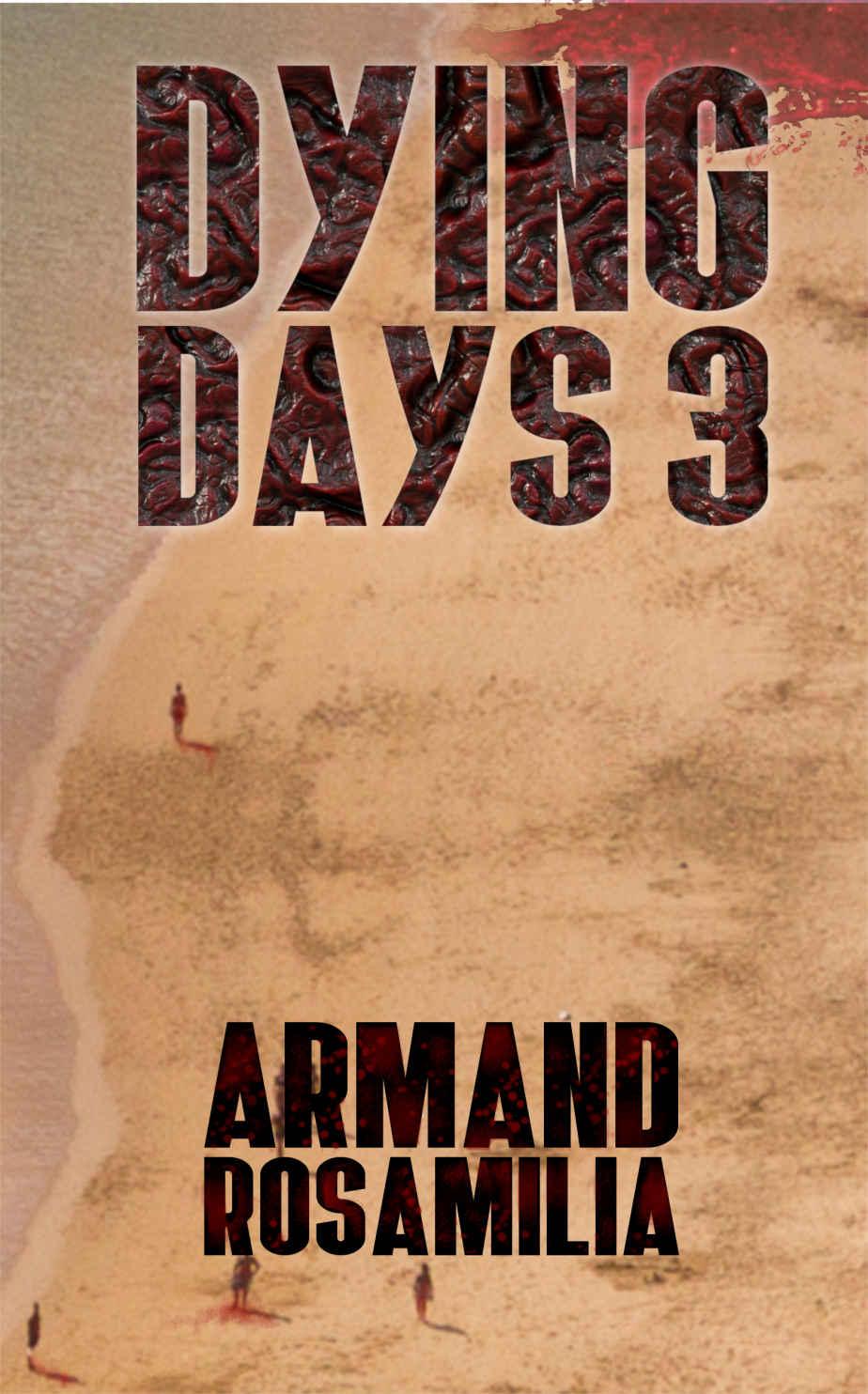 All rights reserved. No part of this book may be reproduced or transmitted in any form or by any means, electronic or mechanical, including photocopying or recording or by any information storage and retrieval systems, without expressed written consent of the author and/or artists

This book is a work of fiction. Names characters, places and incidents are products of the author’s imagination. Any resemblance to actual events or persons, living, dead or undead, is entirely coincidental.

Special Thanks to a bunch of people this time around…

First, obviously all the fans that have made the
Dying Days
series such a huge success and made each new release an event. I thank you!

To the friends and family that have made this so much fun to write, and have given me the support to finish this third installment. I promise: the fourth one won't take over a year to write!

He had a name, once, and it was Frank. He had a last name, but he couldn't remember it. His thoughts, at the moment, were on trying to figure out what exactly a last name was.

The noise he heard was the ocean and he moved his stiff neck and looked down to see his shuffling feet kicking up sand on a beach. Frank had never been to the beach. Never felt sand on his toes, but he was doing it now. He was barefoot. He didn't know why.

Frank couldn't stop walking. He was being driven by something, an anger… but he didn't know who he was mad at. He knew he was raging, though, and needed to strike out and rip someone apart. He didn't know why, but, suddenly, knew it was the only reason to keep moving.

There were others on the beach, but he felt nothing toward them. No anger and no need to destroy them. They moved in the same flowing, general direction as he did. One would veer off and walk into the waves or over the dunes, and he could see more stepping out of the surf and joining the walk.

The word came unbidden to his mind. These were zombies, undead, monsters… and they were in search of the living, to tear them apart, to rape them, violate and break all in their paths. They weren't evil. They were just hungry.

Frank willed himself to stop. A man, with his head broken and at an odd angle, bumped into him. Frank lashed out, with creaking arms, and knocked the zombie to the ground.

It felt right. This mindless creature struggled to rise on battered legs but seemed incapable of simply rolling over and pushing himself up.

Frank knew how to stand. He knew the mechanics of how to drive a car, how to brush his teeth, how to make love to his wife.

His wife had been sick? Frank remembered bits and pieces of memory. He lived in Montreal. He worked in a dead-end job selling newspapers. His wife had been back to Sweden to see her sick mother. By the time she'd returned to Canada, she was coughing and wouldn't talk about the visit or her mother.

He couldn't remember his wife's name, but he remembered the bite mark on her forearm. The wound festered and he'd taken her from the airport right to hospital.

There was an incident. Frank remembered a nurse and doctor being bitten. By his wife? Chaos in the emergency room, followed by stampeding hospital personnel and patients. He went for his wife; she was out of the bed, dragging smashed equipment as she moved.

Frank remembered trying to extricate her from the machines, pulling needles and wires from her body. She stared at the blood as it spurted from her wrist and onto his chest.

Then she'd bitten down on his neck and the pain was intense. He saw red and then… he was dead. He couldn't remember his wife's name.

Warmth on his feet, as the sun beat down. This was no Canadian beach. He had no idea where he could be, but he was walking, so it couldn't be too far.

Frank remembered biting people and savagely attacking their bodies. He remembered ripping apart orifices and, actually, having brutal sex with people until they died. The thought appalled him at first.

The zombie was still trying to get up on the beach. Frank was about to help him, but then he stopped. Why should he? It dawned on him: this monster was after the same dwindling thing he was looking for. The living.

Frank reached up with stiff hands and felt his neck wound. It was just a sliver of ripped skin, although, he swore she'd done a number on him before he died. He flexed his legs and it felt good. How was this possible?

Frank knew the blood, coursing over and into his body, made him stronger. It made him grow closer to whole again. With each living body he consumed, he was closer to being fully formed. He needed to find humans before the rest of these weaklings did.

He knew by looking at them, as they walked by, they weren't conscious of their surroundings or aware like he was. He didn't know why, and he didn't care.

"I was in the first wave. My wife was patient zero," he actually whispered through cracked lips, and was amazed he'd spoken. He felt his vocal chords flexing for the first time in, what, days? Weeks? Months? Years?

The zombies around him were growing as well, but they were nowhere near where he was. But, in time, they would rival him, and grow aware. They would try to destroy him as the enemy. Frank couldn't have that. He was even angrier now, but he let it wash over him. He could control it, little by little. He knew his brain was now his driving force, and not the insatiable hunger.

With his back threatening to pop, Frank bent down and lifted the zombie to its feet. The mindless creature began to shuffle away without a notice to Frank or the help.

Frank moved behind him and wrapped both arms around its neck, crushing the unused windpipe and yanking as hard as he could, trying to dislodge the head from the body. He struggled for several minutes before stopping. The zombie didn't fight back; its feet still trying to propel it forward.

Finally, the head snapped back and the zombie went lifeless. Frank dropped it to the beach. One less to contend with. The beach was filled with them.

His wife's name was Claudia, and he'd met her online. In a chat-room. They'd talked and had webcam dates for months before she flew from Sweden for a visit. She never really left, moving in with him, getting a job at the local daycare, and only returning to Sweden to pack her things and for family emergencies. They'd been wed six months later, a small ceremony attended by friends and family. Their honeymoon was spent in Florida, a week holed up in a hotel room making love while the sound of the waves crashed outside their balcony.

Frank knew he wasn't in Montreal, and he wanted to find his wife. Or did he? She would try to feed off the living as well, and once the stock was gone, he knew he would become a dried husk. He needed the living.

Another zombie got too close and Frank twisted its neck until he heard the snap. These creatures had no fresh blood he could use, but they needed to be eliminated.

Frank trudged down the beach, weaving back and forth as he came across new undead, breaking necks with wild abandon and feeling better and better as he did, using muscles he'd not used in a long time.

There was a pier up ahead and he made his way to it, dropping bodies as he moved from side to side. He went to the dunes and snapped the neck of a little girl, bloody and carrying a small yellow shovel. Two men came out of the surf and he made his way to them. They didn't resist or seem to notice him. He dispatched both, feeling his atrophied muscles seeming to come back to life.

By the time he made his way up to the boardwalk and onto the pier, he was grinning, which hurt, but not as much as he thought it would.

He could read the signs around him, as his bare feet slapped on the warped wooden boards. The large building, at the mouth of the pier, was a restaurant. Frank thought he'd seen it before, and knew Claudia was in the car with him. A rental car. His honeymoon?

The sign painted on top of the building said FLAGLER BEACH.

Where he'd spent his honeymoon. In Florida.

Frank had walked about 1,400 miles. How long would that take?

His nostrils expanded and he took in some of the fresh salt air. A zombie walked right up to him before veering to his left. Frank broke another neck.

He began moving north on A1A, sure this was the direction he'd gone when he was here with Claudia. He needed a place to stay and recover. He could feel his body struggling to survive and grow now. His wounds would heal and his blood would begin flowing again. Frank just knew it. Would he be able to pass for human? Would he be able to get close to them without being destroyed? His mind was filling with memories and thoughts and overloading.

He needed time to process everything in his head, and form a game plan.

The streets weren't crowded with zombies but there were enough of them. He knew it was pointless to wander and try to kill every single one of them, but if he didn't they would eventually gain consciousness and try to destroy him. He'd been one of the first. He had no idea how many more, from the initial wave of attacks, were still out there, and if they were plotting as well. He couldn't take the chance.

He stopped, the hot pavement burning his feet. He didn't actually feel the pain but it was instinctive to him. His feet were black with grime and the bottoms were probably flayed of skin. It would grow. He needed to find shoes to wear.

Across the street was an abandoned restaurant with a wooden walkway leading to its front door. Java Joint. It was a coffee place, the windows blown out. Frank decided he would stay there, out of the sun and away from any of the living. He would gain strength and destroy any zombies who got too close.

He would begin to plot his next move. But, first, he needed to find a good pair of Nikes. And a living person so he could bathe in its blood.

Unknown by Unknown
EXALTED (An Exalted Novel) by Elizabeth, Tara
Ship of Death by Benjamin Hulme-Cross, Nelson Evergreen
Sherlock Holmes in 2012: LORD OF DARKNESS RISING by Mohammad Bahareth
Agent Hill: Powerless by James Hunt
Andrea Pickens - [Lessons in Love 01] by The Defiant Governess
The Boy Who Knew Me When (From Boys to men Trilogy) by Bostick, J.L.
Being Julia (A Forever Novella) by Lynn, Sandi
Spinner by Ron Elliott
Something to Live for (Moonlight Dating Series) by G. Owens, Natalie