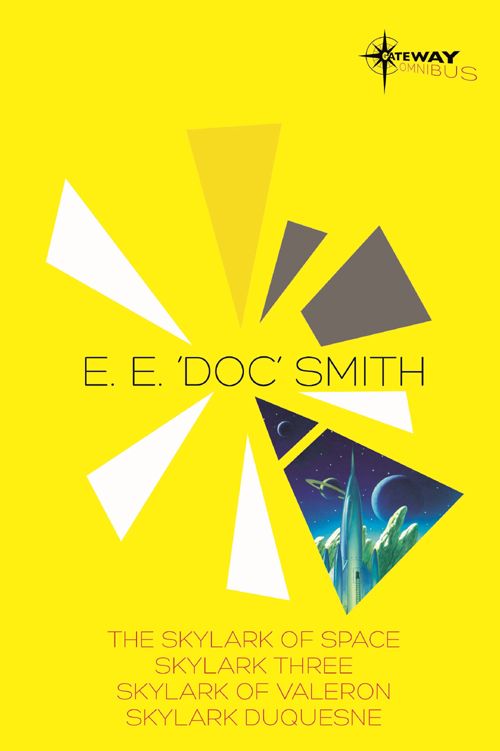 THE SKYLARK OF SPACE

In the last years of the twentieth century (as Wells might have put it), Gollancz, Britain’s oldest and most distinguished science fiction imprint, created the SF and Fantasy Masterworks series. Dedicated to re-publishing the English language’s finest works of SF and Fantasy, most of which were languishing out of print at the time, they were – and remain – landmark lists, consummately fulfilling the original mission statement:

‘SF MASTERWORKS is a library of the greatest SF ever written, chosen with the help of today’s leading SF writers and editors. These books show that genuinely innovative SF is as exciting today as when it was first written.’

Now, as we move inexorably into the twenty-first century, we are delighted to be widening our remit even more. The realities of commercial publishing are such that vast troves of classic SF & Fantasy are almost certainly destined never again to see print. Until very recently, this meant that anyone interested in reading any of these books would have been confined to scouring second-hand bookshops. The advent of digital publishing has changed that paradigm for ever.

The technology now exists to enable us to make available, for the first time, the entire backlists of an incredibly wide range of classic and modern SF and fantasy authors. Our plan is, at its simplest, to use this technology to build on the success of the SF and Fantasy Masterworks series and to go even further.

Welcome to the new home of Science Fiction & Fantasy. Welcome to the most comprehensive electronic library of classic SFF titles ever assembled.

Welcome to the SF Gateway.

Introduction from The Encyclopedia of Science Fiction

The Skylark of Space

4. The Zone of Force is Tested

13. The Declaration of War

4. A World is Destroyed

8. Into the Fourth Dimension

20. The First Universe is Mapped

23. Re-Seating of the Premier

29. DuQuesne to the Rescue

INTRODUCTION
from The Encyclopedia of Science Fiction

Edward Elmer ‘Doc’ Smith (1890–1965) was a US food chemist (he specialised in doughnut mixes), and author, often called the ‘Father of Space Opera’; because Hugo Gernsback had appended ‘PhD’ to Smith’s name for his contributions to
Amazing
from 1928, he also became known as ‘Doc’ Smith. Greatly influential in US pulp-magazine sf between 1928 and about 1945, he found his reputation fading somewhat after the end of World War Two, when it seemed that the dream-like simplicities of his world-view could no longer attract the modern reader of Genre SF. But more than one of the speciality houses that became active after 1945 were founded in the awareness that his vast pre-War space-opera sagas, published only in magazines, had never achieved book publications; and his central corpus was soon made available to new readers. Towards the end of his life, after he retired around 1960, he began producing space operas again, and the work of his prime began to appear in mass-market paperbacks; his popularity soared, and though his reputation has faded to a degree in recent decades, he is by no means forgotten.

Smith’s work is strongly identified with the beginnings of US pulp sf as a separate marketing genre, and did much to define its essential territory: galactic space dominated by Galactic Empires, these usually being run by humans, though Aliens appear frequently, not only as villains; Space Opera plots, featuring heroes and their inventions, are the norm; wars rage across the parsecs. But although Smith’s protagonists fit comfortably into this universe, it is the case that his most developed (and numerous) protagonists, the Lensmen at the heart of the Lensmen epic, are also soldiers: willing employees in a higher cause. his later heroes – like Kim Kinnison himself – advance through promotion, and rule their universes as dictators in all but name, for the cause of Good.

When in 1915 Smith began to write the first novel of his Skylark series with Mrs Lee Hawkins Garby (1892–1953), a neighbour seconded to help with feminine matters such as dialogue, no prior models existed in popular fiction to source the combined exuberance and scale that
The Skylark of Space
(see below) demonstrated when the magazine version finally began to appear in
Amazing Stories
in 1928 (the book form only appeared in 1946); its two immediate sequels –
Skylark Three
,
Skylark of Valeron
(see below for both) – add to the exuberance. (
Skylark DuQuesne
was published posthumously in 1966.)

But it was not until he began to unveil the architectural structure of his second and career-climaxing series that Smith was able to demonstrate the thoroughness of his thinking about Space Opera, though perhaps losing some of the spontaneity of Skylark. It is with the Lensman series – or The History of Civilization, the over-title for the 1953–1955 limited-edition boxed reprint of the original books – that his name is most strongly associated. In order of internal chronology, the sequence comprises
Triplanetary
,
First Lensman
,
Galactic Patrol
,
Gray Lensman
,
Second-Stage Lensmen
and
Children of the Lens
.
The Vortex Blaster
, assembling stories published during World War Two, and only put in book form after Smith’s death, is also set in the Lensman Universe, probably some time before
Children of the Lens
; but does not deal with the central progress of the main series, the working out of which was Smith’s most brilliant auctorial coup. As resorted and augmented in book form, the first two novels, one of them written much later, likewise stand outside the main action; it is the central four volumes that constitute the heart of Smith’s accomplishment. Conceived as one 400,000-word novel, and divided into separate titles for publication between 1937 and 1948 in
Astounding
, this central Lensman tale is constructed around the gradual revelation, paced by moments that for many readers caught the essence of the Sense Of Wonder, of the hierarchical nature of the Universe: a sense that the universe was both infinitely surprising but, in the end,
controlled
by Arisians.

That gradual revelation is eschewed in the full series as published in book form. Here, we learn immediately that two vastly advanced and radically opposed Forerunner races, the good Arisians and the evil Eddorians, each dominating a separate galaxy, have been in essential opposition for billions of years. The Arisians understand that the only hope of defeating the absolute Evil represented by the Eddorians is to nurture the growth over aeons of a countervailing Civilization developed from their own ‘spores’ via special breeding lines on selected planets, of which Earth (Tellus) is one. Guided by their Arisian Secret Masters, these breeding lines develop heroes capable of enduring the enormous stress of inevitable conflict with the escalating galactic conspiracy of evil known collectively as Boskone, a force inimical to Civilization and secretly commanded through a nest of hierarchies by the invisible Eddorians.

As the conflict deepens, the Arisians (always in disguise) make available to their unknowing scions a Psionic pseudo-gem known as the Lens which – when attached physically to advanced specimens of the breeding programme, who have already formed a Galactic Patrol responsible for defending Civilization – awards them certain telepathic and other Psi Powers, operating both as a weapon and a communication device. The central figure of the series is the human Kim Kinnison, who with his wife represents the penultimate stage in the Arisian breeding programme, and whose children will finally defeat the Eddorians. As the central sequence progresses, we climb with Kinnison, link by link, through a vast chain of command, evil empire after evil empire, until he defeats Boskone and becomes, in essence, the ruler of the civilized universe. But Kinnison is destined only slowly to understand that the empire of Boskone, which he has destroyed through the use of weapons of unparalleled immensity, is not the final enemy, whose name he never learns, no more than he ever discovers the full truth about his own Arisian mentors, whose civilized precepts he enacts. Though his powers are vast, he remains ignorant of the true scale and nature of the Universe, which is greater, and requires greater powers to comprehend and confront, than even a hero with superpowers is capable of grasping. Perhaps the deepest attraction of the Lensman series lies in the fact that Kinnison, as ultimate commander of the organization of Lensmen (itself hierarchical), is
licensed
; but that only we (and his children) know who issued the licence.