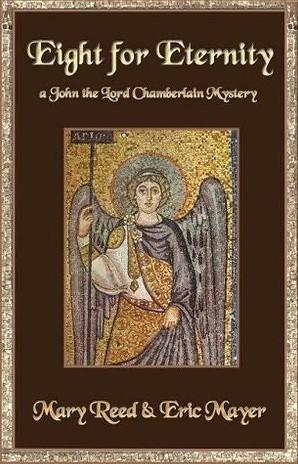 The condemned man narrowed his eyes against the January sun, a brilliant translucent disk suspended in the early morning mist.

He would have shielded his gaze but his hands were bound behind him. He could no longer feel his feet. They had become dead things during the short voyage across the Golden Horn to the place of execution. Sandals offered no protection from the cold radiating up through the bottom of the boat.

The Urban Prefect’s men had dragged him from his room just as he was finishing a plate of olives. They hadn’t even given him time to change into his boots. The boots were left by the bed. They would sit there for a long time, or until one of the servants thought they could be stolen with impunity.

When he was born the ancient mid-wife who fancied herself an oracle told his mother that her son would die in his boots.

Apparently she was mistaken.

He moved forward as slowly as the guards would allow. Perhaps he was still asleep at home suffering through a dream brought on by a tainted olive. The fog drifting off the nearby water lent a dream-like appearance to the surroundings.

The Prefect had ordered a scaffold to be hastily erected on a stretch of waste ground across the Golden Horn from the city. Workers had been hammering timbers together even as the condemned man was being found guilty in the Prefect’s private chambers.

Despite the hasty preparations, word of the executions had spread. From all around came the murmur of a restive crowd. Some were there to gawk, others to revel, still others to protest. The fog reduced them to shadowy ghosts moving through a distant underworld.

The prisoner paid no attention to the phantoms. He struggled to conceal the panic he felt.

His captors had taken away his bright green dalmatic decorated with roundels depicting horses and chariots, and dressed him an undyed tunic that hung straight from shoulders to knees, the clothing of the lowliest laborer.

Even so, they could not take away his dignity. They would have to content themselves with taking his life.

Broken chariots and other rubbish had been dumped along this stretch of foreshore. A bearded face peered up from between the broken spokes of a wheel. A marble hand lying nearby held a rein. The shattered statue of a once-revered driver consigned to oblivion, perhaps to make room in the Hippodrome for new heroes, or for yet another likeness of the charioteer Porphyrius.

The thought of oblivion returned to nip at the condemned man’s consciousness for the hundredth time. A void opened up inside him, a sensation of falling. A bitter wind from the direction of the scaffold seemed to bring to his nostrils the faint reek of death. He was not alone this morning in dying.

And for what? For instigating a minor commotion to call attention to injustices being visited upon the population.

By what right did Justinian take the life of someone who only sought decency and fairness for his fellows? The emperor was nothing more than a man. Why should he live and others die at his whim? No, the emperor was not a man. He was a demon.

It was time to depose him.

The point of a spear prodded the young man in the back so hard he winced.

“Hurry up,” came a voice from behind. “You’ll be late for your appointment. My fingers are freezing. I don’t want to be shivering out here all morning.”

“Show some respect,” said the guard walking beside the young man. “We all have to make the final journey sooner or later.”

“Not with a rope around our necks we won’t,” grunted the other and blew on his hands noisily. The dim cloud from his breath drifted out in front of them in the cold air.

The prisoner had witnessed executions. He had always wondered about that instant before oblivion, when the noose snapped tight around the neck, before the head lolled lifelessly to the side.

During the night, in his cell at the Praetorium, he drew back to that final breath. What could it be like? To die, instantly? Or would it be so quickly done? No, even his most terrible imaginings could not encompass anything other than a quick death.

Do we know anything except by reflection? Even as we taste the wine, we are noting an experience already receding into the past. Would a hanged man recall crossing from life to death? What can such a passage be like? Would it be experienced and immediately forgotten? Or never experienced at all?

He had argued the question with himself and concluded he would never be aware of his ending. He would simply cease. And then a terrible horror blossomed in his chest.

He was going to die.

It was impossible. Yet inevitable.

Although he considered himself a good Christian, he did not pray. The words from the Gospels moved him profoundly when he heard them in the Great Church but he realized now that they had failed to instill in him any belief strong enough to call upon in his dark cell. He could not recall clearly the god of love. What came to mind were fiery pits, judgment, and eternal torments.

He decided to seek refuge in his own memories. But which? The thrill of his favorite team winning a chariot race seemed trivial, the pleasure of fine dishes served at a banquet a mockery. He thought of women he had known. One in particular. But what comfort was there in contemplating eternal separation? Instead, he settled on a recollection of himself as a child, playing with a small, carved, brightly painted horse, while seated in the sun beside the fountain in the garden of his father’s house under the watchful gaze of an old servant.

One of his escorts took hold of his arm. The condemned man realized with a shock they had reached the wooden steps leading up to the platform from which he would step into eternity. He placed his dead foot on the first of the steps.

As he mounted the stairs the noise from the spectators increased. The guards looked around nervously. Their hands tightened on their spears.

Then he finally stood in the place he had envisioned so many times in the hours after his sentencing. He had seen it all clearly, in the future. A few hours hence. A long time ahead. Not now. His heart leapt. His throat tightened. He couldn’t breathe. He struggled to force himself awake, to break through the black membrane of sleep.

He was dimly aware another prisoner now stood beside him. He didn’t want to look, didn’t want to see the final preparations being made. It would be too much like looking into a mirror. He felt the platform tremble under heavy footsteps. Guards? The man who would carry out the Prefect’s orders?

No, he would not look. He directed his gaze away into the distance, avoided looking down into the square hole on whose edge he stood or up to the stout wooden timber crossing the empty space.

Hadn’t they been given enough time to even construct a trapdoor? Was it so urgent that he be deprived of life?

There was a monstrous roar of voices. The fog swirled away, revealing a sea of faces gaping upwards. A sparse line of guards edged backwards toward the scaffolds, pressed relentlessly by the assembly. Shouts and imprecations against the emperor filled the air.

He heard a thump and looking down saw the noose lying on the planks at his feet where the executioner had dropped it. Someone cursed the executioner’s clumsiness. The crowd jeered.

Then he felt the rope go over his head. It was heavier than he had expected. It rasped his neck as it was pulled into place.

He looked across the Golden Horn. Mist ascending from the black water entwined the hills of the narrow promontory upon which Constantinople sat, shrouding its forums and streets in a luminous cloud. Here and there the top of a building emerged. In many places crosses made of wood and stone jutted into view, simple and elaborate, erected on churches and residences.

A vision of heaven, or of the site of numerous crucifixions.

He felt the executioner’s warm breath, stinking of garlic and cheap wine, on his cheek as he leaned forward to adjust the rope with shaking hands.

The spectators surged forward. It seemed almost that they might overwhelm the guards and carry the condemned to safety. The Prefect’s men managed to establish a cordon at the very base of the scaffolds.

“Hurry up!” one of the guards yelled. “What’s taking so long?”

I am still alive, the young man told himself. There is still time. Death has not arrived. Not yet. Something glinted above the mists across the water. He recognized the statue of Constantine atop its high column. The emperor, crowned with a halo of seven rays, gazed toward the rising sun.

A hand hit him between his shoulder blades. He stumbled forward, toward the hole, unable to balance himself. He could see the ground below. The abyss opened.

Then he was lying on his back.

He blinked. Confused, paralyzed. Why could he not move his hands?

He remembered nothing. Where was he? In his bed?

No. On the ground. It was cold. There was a fiery pain in his side. He could not cry out. Something was wrapped round his throat.

He lay there looking up, past the dangling rope, at a square of lightening sky where a gull circled.

He was engulfed in a deafening rush of voices.

“Still alive,” he heard someone say. “We’ll have to do it again.”

Foetal Attraction by Kathy Lette
The Black Chalice by Marie Jakober
In Hiding: A Survivors Journal of the Great Outbreak by Elliott, ,ichael
The Fall of Maggie Brown by Anne Stuart
Kazuo Ishiguro by When We Were Orphans (txt)
Stolen: A Novel of Romantic Suspense by Shiloh Walker
ICEHOTEL by Allen, Hanna
The Reckoning - 3 by Sharon Kay Penman
Camilla by Madeleine L'engle
Secrets in the Shadows by Jenna Black