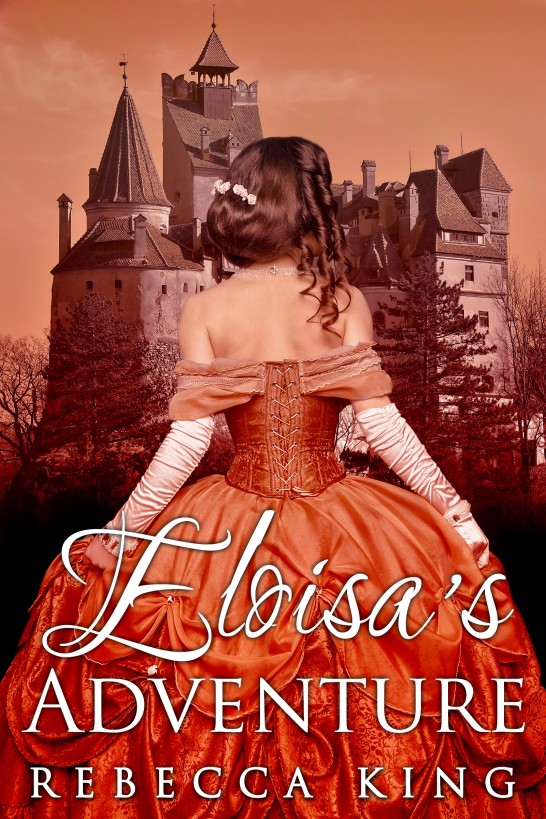 OTHER
BOOKS BY REBECCA KING

Eloisa
lifted the lid of the box and stared at the silken creation that
lay before her.

“Let me
see it,” Cissy demanded as she peered over her shoulder.

“My
beautiful dress,” Eloisa whispered reverently. She lifted the
voluminous folds of her new ball dress free of its delicate
confines and held it against her chest. She shook out the skirts
and stared down at herself in stunned delight. Her new gown was the
most exquisite item of clothing she had seen in her entire life. It
was wonderful just to be able to own such a creation. She was so
excited that she couldn’t stop herself from twirling around. The
thought of being able to wear it for the forthcoming ball brought
forth such excitement that a giggle escaped her.

She
looked at her sister, Cissy, and grinned. “Well?” she
asked.

“Good
Lord, Eloisa, you must keep dancing while you are at the ball
tomorrow night. If you stop, a handsome prince charming is going to
sweep you off your feet.” Pride rang clearly in Cissy’s voice as
she studied her.

Eloisa
shook her head ruefully when Cissy’s chin quivered. While Cissy
dabbed at her eyes, she held the dress up to her chest with one
hand and stroked the silken folds of the voluminous skirts with the
other.

“I am
sorry,” Cissy whispered as she dug around in her pocket for a
handkerchief.

“Do you
really like it?” Eloisa asked as she studied herself in the mirror
and tried to envisage what the dress would feel like on.

Cissy
studied her thoughtfully. “Are you sure the colour is right?” she
asked with a hint of caution in her voice. When Eloisa whirled to
face her, she looked a little apologetic. “I didn’t mean I didn’t
like it,” she gasped. “It is gorgeous, but you are going to your
first ever ball. Should you not wear a lighter colour?”

Eloisa
smiled at her darling sister to assure her that she wasn’t
offended. “I am not supposed to be there if you remember,” she
reminded her. “I am not an invited guest.”

Cissy
remained cautious, in spite of Eloisa’s eagerness. “Are you sure
you should do this? I mean; what if a guest sees you and thinks
that you have broken in or something?” she asked.

She
didn’t want to put a dampener on her sister’s joy, but felt
compelled to raise her concerns over the arrangements Mr de Lisle
had made. Although his heart had been in the right place, the
unusual conditions of Eloisa’s attendance at Lord Aldwich’s
birthday ball didn’t seem fair on her darling sister. Eloisa had
put so much time and effort into her dancing lessons that she
deserved to go to the ball as a guest with a formal invitation. She
shouldn’t be made to dance on the terrace outside as was required
of her.

Completely unaware of her sister’s doubts, Eloisa smiled. “I
don’t know many burglars, you understand, but I doubt any of them
would ever wear something this splendid.”

She
whirled around the room in gay abandon and giggled when her legs
got ravelled up in the folds of the skirts and she became dizzy.
She flopped into the chair next to the window with a grin and
draped the dress over her lap while she studied her
sister.

“I am
sorry that you cannot come, Cissy,” she declared quietly. Her smile
dimmed. “You should come with us.”

“No,
thank you. This is your evening, Eloisa,” Cissy declared firmly.
She shook her head so vehemently that her ringlets bobbed and
danced against her alabaster cheeks. “I shall stay here, and shall
continue to work on my embroidery instead thank you very
much.”

“Why do
you think father insisted we take these lessons?” Eloisa asked when
some of her joy had faded.

Although
she had raised this issue many times with Cissy over the past
several weeks, neither of them had been able to come to any
satisfactory conclusion. She didn’t really expect any different
outcome this time round, but felt compelled to ask
anyway.

“The
solicitor said it was a condition of us receiving our inheritance.
You were there when he informed us that we each must engage the
services of someone to teach us a useful skill. Once we complete
training in our chosen skill, father’s money will be transferred to
us. I don’t know why the stipulation was put there, but it was.”
She looked at Eloisa. “Father never bothered to explain anything he
did to us.”

Eloisa
nodded. Indeed, what their father had actually done with his life
was a complete mystery to both of them. It had been a shock when
they had visited the solicitor after their father’s death and
discovered the terms of the will. Although both sisters understood
the common sense behind the stipulation, the reason he had left it
until he had passed away left them both somewhat
confused.

“I am
aware that I keep raising this, but if Papa wanted us to learn a
useful skill, why wait until he died to demand that we learn one?”
Eloisa frowned at Cissy, who shrugged.

“I do
not know, my dear,” Cissy replied. “Neither of us had any idea that
Papa had so much money stashed away.” She frowned at Eloisa. “It is
a shame he hoarded so much of it. Our lives might have been better
if he had spent some while he was here to enjoy it
himself.”

“Our
life at Hollywell hasn’t been that awful though, has it?” Eloisa
gasped. She paused and stared out of the window. “I think our lives
are of a perfectly reasonable standard,” she argued.

Cissy
snorted. “Papa was wealthy, yet we live a frugal life in the middle
of a small country village. If Papa hadn’t been so mean with his
spending, we could be living somewhere like Lanley Hall instead,”
she challenged.

Eloisa
stared at her sister in shock. She had never seen such fire in her
sister’s eyes before. Cissy was usually the meek and mild one of
the two of them. It was a surprise to see her so scornful, and
about their father no less.

“Lanley
Hall is huge. It must be difficult to heat in the winter,” she
mused.

“What?”
Cissy snapped with a frown.

Eloisa
studied the well-worn rug at the foot of the bed while she chose
her words. “I am just saying that living in a massive house comes
with a lot of responsibilities and expense. I appreciate that Papa
could afford to spend more on us than he did, but I think it is
nice here. We haven’t had the luxuries that wealthy people take for
granted but, in return, our lives have not been too difficult. The
confines that an aristocratic lady has imposed upon her haven’t
applied to us. Papa has allowed us to do what we wanted. We have
been spoilt really, just not financially.”

Cissy
knew she would disagree with her sister on this matter forevermore,
so let the matter drop for now. Although she could understand
Eloisa’s reasoning, she knew that they could have moved in circles
that befit their status, and would probably be married by now.
Unfortunately, because they were stuck in this rural backwater,
there wasn’t an eligible suitor in sight for either of them. Now,
thanks to their Papa’s frugality, Eloisa was going to creep through
the back door of Aldwich Hall like a criminal.

“You
should be making a grand entrance at Lord Aldwich’s ball through
the front door with everyone else,” Cissy declared.

When
Eloisa looked at Cissy, her eyes were solemn. “What is done is done
now. We can’t go back and change it,” she sighed.

Silence
settled over them for several minutes. Eloisa shifted uncomfortably
in her seat. When she sighed, Cissy looked at her.

“What is
it dearest?” she asked.

“I hate
to admit it but, in some ways, you are right about Papa,” she
whispered.

“If he
had arranged suitable tuition for us while we were younger, we
might be proper ladies by now and would have been able to attend
Lord Aldwich’s ball as proper guests. Unfortunately, father didn’t
prepare us for lives married to wealthy men who live in houses like
Lanley Hall. I wouldn’t have the slightest notion of how to run a
house like that; and neither would you.” She gave Cissy a pointed
look to which her sister nodded. “Having said that, I don’t have
the slightest idea what to do at a formal ball either.”

“Apart
from dance,” Eloisa confirmed. “I don’t belong there, Cissy. I just
want this one night to practice what I have learned. Then I shall
leave and not look back. I don’t have the life skills, or the
learning, to move about in circles like that on a regular
basis.”

“I
suppose it isn’t too much to ask,” Cissy agreed quietly, if only to
ease her sister’s fears. Inside, she still didn’t agree with Eloisa
being made to dance on the terrace.

Eloisa
seemed to sense her sister’s continued disquiet. “I don’t belong at
Aldwich Hall, Cissy, so please don’t object to the
arrangements.”

“Alright, I will let the matter drop,” she agreed with a nod.
“I just don’t see why Papa put the stipulation in his will if he
didn’t want you to use your chosen skill. What’s the point of
learning to dance if you don’t get the opportunity to put it into
practice properly? That’s all I am saying.”

Eloisa
nodded thoughtfully. “Do you know what?”

“I think
Papa was aware that if he had arranged for us to undertake training
to be ladies, we would have had a proper coming out. That would
have taken us away from him.”

“Do you
think he was lonely and wanted to keep us here for as long as he
could?” Cissy thought about that for a moment. Now that Eloisa
mentioned it, it made sense.

“He may
have been afraid we would leave him. We were all he had,” Eloisa
mused.

Silence
settled over them for a moment. Cissy shivered, as if to shake off
the grief that hung over her. She offered Eloisa a brave smile and
nodded at the dress.

“Well,
look on the bright side,” she said with a smile of encouragement.
“You may find a handsome suitor waiting for you at the ball who
won’t care about your upbringing.”

Eloisa
snorted. “I doubt it. I am not to mix with the guests, remember?”
She threw Cissy a grin. “The only other place we can dance is at
the village ball in the autumn. When did you last dance the
Viennese waltz at the country fayre?”

Cissy
laughed and shook her head. Now that the joy had returned to
Eloisa’s eyes, she regretted ever mentioning money and their
father’s will.

Eloisa
rolled her eyes. “I am going to dance, that’s all. My partner for
the evening will be Mr de Lisle, and he is no prince. He has been
able to arrange this with Lord Aldwich because he taught his
lordship’s children how to dance, or something. Lord Aldwich said
it was too late to add me to the guest list, but I was welcome to
dance on the terrace.” She looked at Cissy and shifted in her seat
when she saw the doubt cloud her sister’s face again. “We don’t
have connections, Cissy, so I cannot expect more. It’s generous of
Lord Aldwich to allow me to go at all given that I have never met
the man myself.”