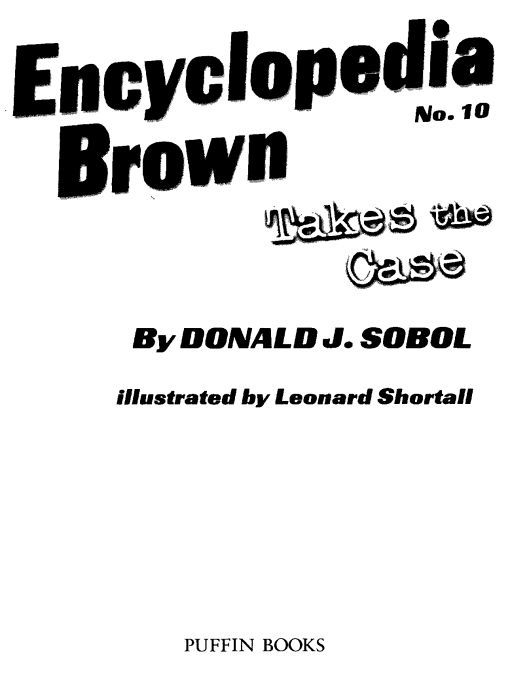 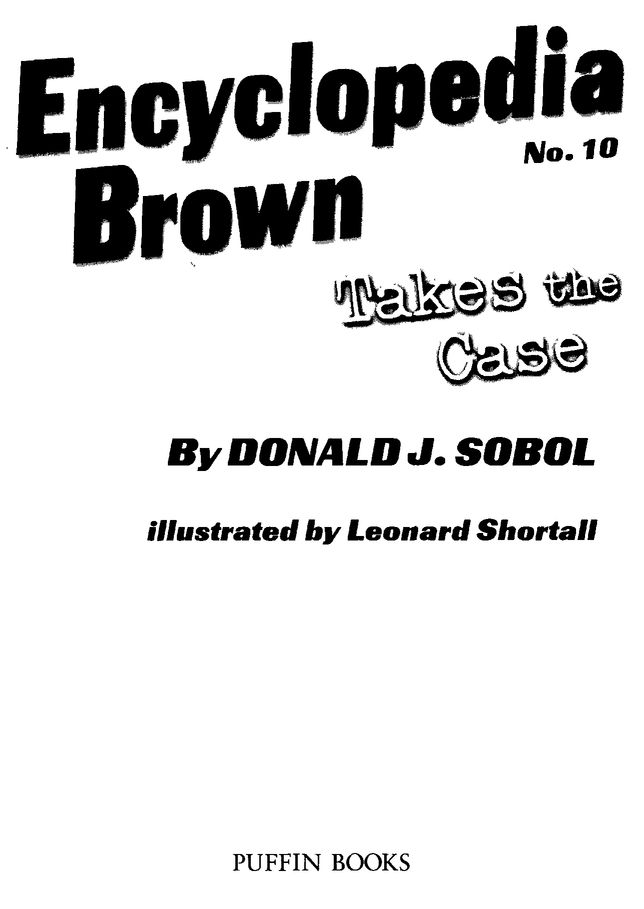 For
Marilyn and Murray Winston 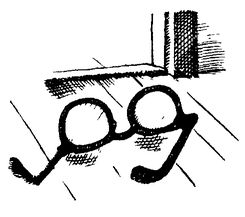 The Case of the Stolen Money
Police officers across America were asking the same question.
Why did everyone who broke the law in Idaville get caught?
Idaville looked like many seaside towns its size. It had two delicatessens, three movie theaters, and four banks. It had churches, a synagogue, and lovely white beaches. And it had a certain red brick house on Rover Avenue.
In the house lived Idaville’s secret weapon against lawbreakers—ten-year-old Encyclopedia Brown.
Mr. Brown was chief of the Idaville police force. He was proud of his men. But he was not too proud to get them help.
Whenever Chief Brown came up against a case that no one on the force could solve, he knew what to do. He went home and ate dinner.
Before the meal was over, Encyclopedia had solved the case for him.
Chief Brown wanted to tell the world about his only child-to announce over satellite television, “My son is the greatest detective who ever shot a water pistol!” ,
But what good would it do? Who would believe that the mastermind behind Idaville’s spotless police record was only a fifth-grader?
Encyclopedia never let slip a word about the help he gave his father. He didn’t want to seem different from other boys his age.
But there was nothing he could do about his nickname.
Only his parents and teachers called him by his real name, Leroy. Everyone else called him Encyclopedia.
An encyclopedia is a book or set of books filled with facts from A to Z—just like Encyclopedia’s head. He had read more books than anyone in Idaville, and he never forgot what he read. His pals swore that if he went to sleep before thinking out a problem, he stuck a bookmark in his mouth.
Not all his father’s most difficult cases happened in Idaville. Friday evening, for instance, the dinner table conversation turned to a mystery in another town.
“Bill Carleton, the Hills Grove chief of police, telephoned me this morning,” said Chief Brown. “He has a robbery on his hands that’s got him worried.”
“Isn’t Hills Grove up in Canada, dear?” asked Mrs. Brown.
“It’s in northern Canada,” answered Chief Brown. “Even during the summer the temperature sometimes drops below freezing.”
“The Idaville police department is certainly famous,” said Mrs. Brown proudly. “Imagine a call for help from Canada!”
“What was stolen, Dad?” asked Encyclopedia.
“Ten thousand dollars,” said Chief Brown. “The money was taken three days ago from the safe in the home of Mr. and Mrs. Arthur Richter.”
Chief Brown put down his soup spoon.
“I have all the facts from Chief Carleton,” he said. “But I’m afraid I still can’t help him find the thief.”
“Tell Leroy,” urged Mrs. Brown. “He’s never failed you yet.”
Chief Brown grinned at his son. “Are you ready?” he asked, taking a notebook from his breast pocket. He read what he had written down.
“Last Friday Mr. and Mrs. Richter, who have lived in Hills Grove three years, flew to Detroit for the weekend. Before leaving, they gave a key to their empty house to a friend, Sidney Aukland, in case of an emergency. On Saturday, Aukland entered the house.” 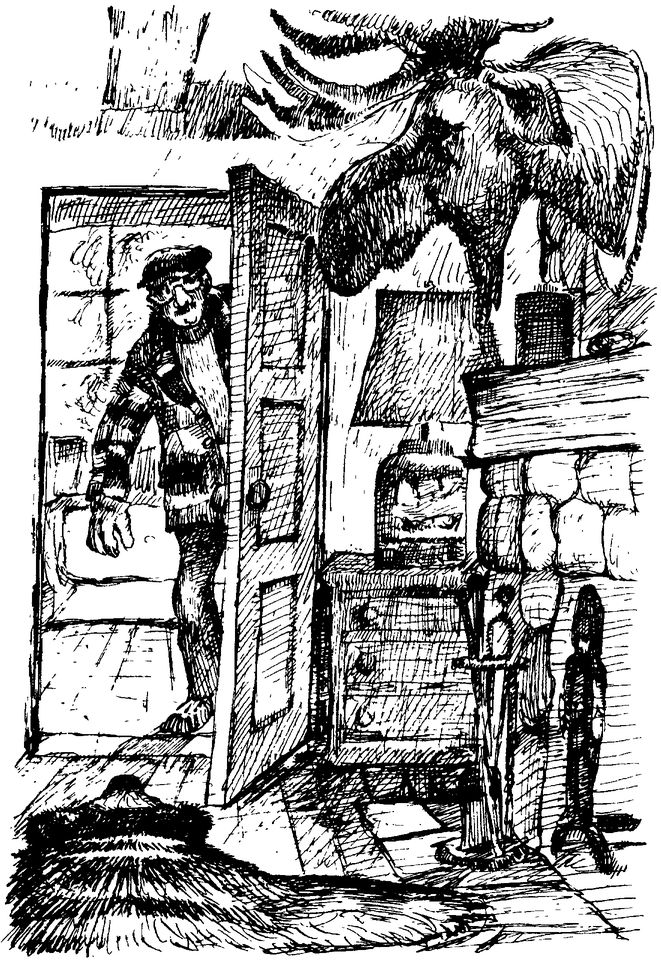 He had just stepped through the front door when he heard a noise in the study.
“Was it an emergency?” asked Mrs. Brown.
“No,” replied Chief Brown. “The weather had turned cold. It had dropped below freezing. Aukland said he wanted to be sure there was enough heat in the house.”
Chief Brown read again from his notebook.
“Aukland said he entered the house Saturday morning at ten o’clock. He had just stepped through the front door when he heard a noise in the study.
“He called out, ‘Who’s there?’ and opened the study door. Two men were at the safe. They attacked him. He says he didn’t have a chance once they knocked off his eyeglasses. Without them, he can’t see six inches in front of himself.
“The two men tied him
up,
he
says.
It wasn’t until an hour later that he worked himself free and called the police.”
“Did Mr. Aukland get a look at the two men while he still wore his eyeglasses?” asked Mrs. Brown.
“Yes,” replied Chief Brown. “He says that if he sees them again, he’ll recognize them.”
“Then what is the mystery?” exclaimed Mrs. Brown. “Why did Chief Carleton telephone you for help, dear?”
“He suspects Aukland,” said Chief Brown. “He thinks Aukland stole the money and made up the part about the two men. But he can’t prove Aukland is lying.”
Mrs. Brown glanced at Encyclopedia. As yet the boy detective had not asked his one question -the question that always enabled him to break a case.
Encyclopedia had finished his soup. He was sitting with his eyes closed. He always closed his eyes when he did his hardest thinking.
Suddenly his eyes opened.
“What was the temperature in the house, Dad?” he asked.
Chief Brown looked at his notebook.
“Aukland says that the house was comfortably warm when he entered it. After finding his eyeglasses and calling the police, he checked the reading. It was seventy degrees.”
“Leroy ...” murmured Mrs. Brown. Disappointment was in her voice.
She was so proud when Encyclopedia solved a mystery for his father before she served the main course. But sometimes she had to wait until dessert. This looked like a dessert case.
“What is important about heat?” she asked.
“Not any heat, Mom,” said Encyclopedia. “The heat in the house.”
“I don’t follow you, son,” said Chief Brown.