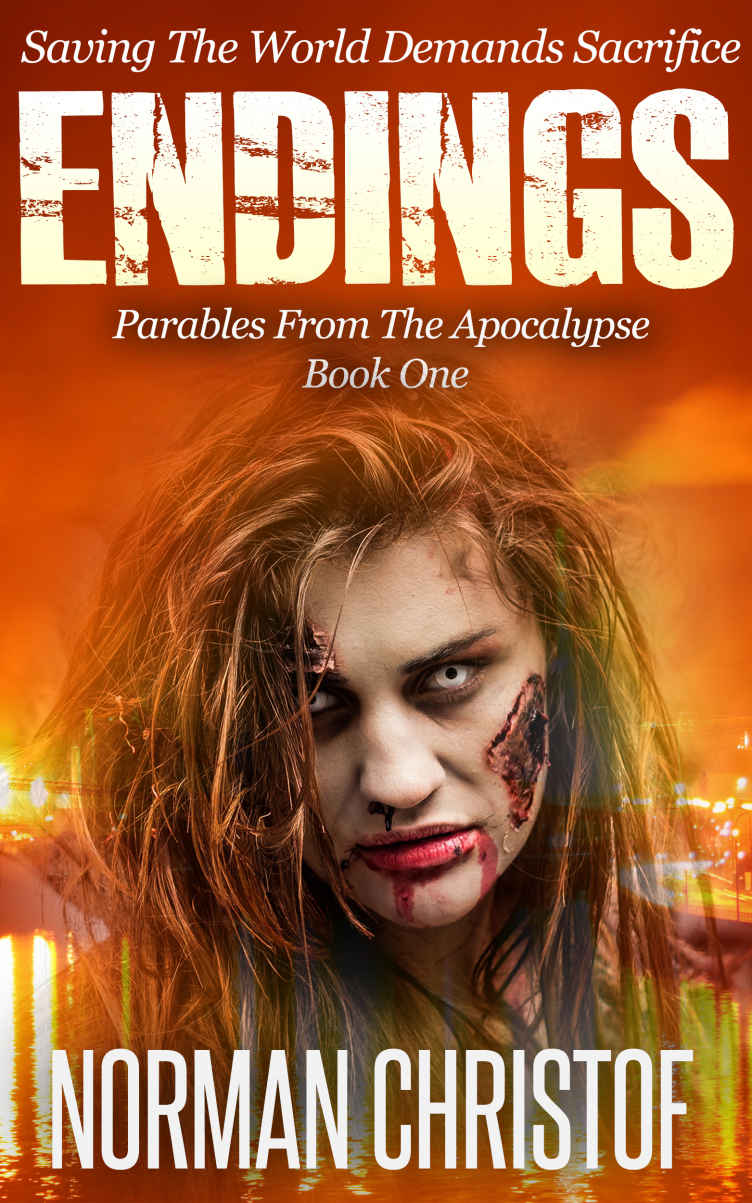 Parables From The Apocalypse, Book One

This is a work of fiction. If you find any similarities to real people, places, events or planets you're sadly mistaken.

No part of this publication may be copied, reproduced in any format, by any means, electronic or otherwise, without prior consent from the copyright owner and publisher of this book.

Parables From The Apocalypse

Heat Of The Battle

Then There Were Three

Colonel Chaz Sheperd walked the rows of deserted soldiers' tents, while recent battles weighed heavy on his mind.  At least some of his platoon had survived, which was more than could be said for other commanders.  These zombie freaks were becoming more resistant.  The human casualties continued to soar, while the freaks kept coming.  Originally, the infestation hadn't been a military problem.  Local law keepers were the solution.  May as well have used dog catchers.  There were simply too many of the freaks.  Then the general public had compounded the problem.  People can be a pain at the best of times, but when confronted with zombies, they become complete idiots.  Cops can deal with idiots, but mass-murdering freaks and idiots together were too much.   By the time politicians got around to bringing in the military, it was too late.  Renegade vigilante groups took responsibility for hunting and killing freaks.  The original untrained vigilantes didn't fare well.  Most died.  Those good ole days were a scant fifteen years ago, and few of the original survivors remembered anything before that.

Chaz was a survivor.  He could still remember the smell of his first battle.  The smell never changed, and this camp smelled of fresh death.  The bodies had been buried days ago, but the reek still hung in the air.

Now, the military was in charge of the freaks.  The dog catchers had a better track record.  At one point, Chaz had commanded an entire battalion.  With their forces dwindling, competent commanding officers were few and far between.  Prior to the zombie wars, soldiers had been trained primarily in urban warfare.  Modern-day skirmishes were fought in crumbling cityscapes, chasing terrorists or rebel factions that threatened US interests worldwide.  Nobody knew how to fight in the woods or mountains.  At least, not the US military.  Yet here they were, in southern Louisiana, fighting through swamps that were breeding grounds for freaks.  It was hard to believe freaks could survive here. You'd think they'd be slow-moving chow for gators, but even the gators had no taste for them.  Once, Chaz had watched a family of zombies walk right through a congregation of dozing gators.  The gators had barely moved.  Chaz blew the heads of the zombies, left them lying dead in their tracks, and still the gators wouldn't touch them.

No one knew why the swamps were so infested. There were crazy stories about freaks rising up from sinkholes in the inner swamps.  The nutcases liked those stories.  So did the religious fanatics.  The experts however, had no rationale for why zombies kept coming from the swamplands.  Not that it would have made a difference. It was the military's job to deal with them now, no matter where they came from.

Chaz walked past soldiers sitting on supply crates, cleaning their weapons.  No one made eye contact.  No one acknowledged each others presence.  No one saluted.  Normally that would constitute a severe verbal reprimand in the colonel's book.  Today, he just kept walking.  Things were changing.  Chaz could sense it.  It had been a solid week since their last skirmish in the Honey Island Swamps.  Chaz had filed a report with Southern Command in Atlanta, but heard nothing back.  Given their losses, that didn't make sense.  Only twelve soldiers left in the lone surviving platoon patrolling Louisiana should elicit some response from Command.  They were going to need reinforcements, or they'd risk losing the entire state.  Chaz had managed to contact battalions in Mississippi and Alabama, but neither of them knew anything.  The Montgomery battalion had sent a team to investigate yesterday, but still no word.

Chaz entered the unguarded command tent.  The only person inside was communications tech Private Ben Jones.

"Private! Who's supposed to be on guard outside this tent, and where the hell are they?"

Standing quickly from his communication station and saluting, Jones replied, "Sorry sir, I don't know.  They weren't there when I entered an hour ago."

Chaz returned the salute. "Jesus, anyone could walk in here.  We need to maintain some semblance of order.  Go find out who the hell is supposed to be here, and get their ass in here."

"Yes, sir.  But there's one thing, sir; you should hear this first. A communication we just received."

"From Atlanta?  Have they finally decided to send us reinforcements?"

"No, sir, Command in Atlanta haven't responded.  And I don't think they will."

Chaz eased into a seat.  "Go ahead, Private, spit it out.  No need to add to the camp drama."

"The message was from Central Command in Washington, sir.  They've fallen.  The Pentagon is destroyed.  There were multiple explosions and the whole place lies in ruin.  The White House is burning, and fire crews are struggling to get it under control. There were no survivors reported from either location. The message was transmitted from an undisclosed location in Washington.  It wasn't one of our verified transmitter locations, but it followed all communication protocols. The transmitted security codes are valid.  I believe the message is authentic."

Chaz stared at his hands.  "Any other news about Atlanta or the other command posts?"

"No, sir, it was short.  Just about the Pentagon and the White House."

"Yes, sir. I'll go find out who's supposed to be on guard duty."

Chaz raised his head and stared silently for a moment at the private. "I said it doesn't matter.  Go on, get outta here."

Chaz got out of his chair.

"Pass the word.  Let everyone know what you just told me."

"Just that message?  Nothing else?"

"That's it, Private.  There's nothing else to say."

It didn't take long.  Chaz could hear the chatter of the enlisted outside the command tent, but no one entered.  Why would they?  Chaz was left alone with his thoughts.  He drifted back to the first zombie war.  He'd enlisted near the end of the first war.  He'd had few other options.  Job opportunities weren't that great; no one advertised for college dropouts in the local papers.  College life wasn't tough, Chaz was just bored.  He was looking for adventure, and where better to look than the army?   He found adventure alright.  It didn't take long for the second zombie war to kick off, and Chaz was back in the fray.  Killing freaks, and eventually commanding those that killed freaks, was a perfect fit for an angry, bored young man.

Abby had changed all that.  She was enlisted too, but for different reasons.  The army was a means to an end for her.  A better life through education, which her family couldn't afford.  When the second war ended, they both decided they were done with the army.  Abby's dream of a better life was just around the corner.  The time between wars didn't last long enough for Abby.  Her dreams started to slip away.  Chaz began to realize her dreams weren't his dreams.  Only one of them was suited for family life, and it wasn't the one who signed up for the third zombie war.  She refused to go, and he refused to stay.  It was the beginning of their end. The real war and fighting became a harsh reflection of the war and fighting in their family life.

The third war was coming to an end. Chaz could see that.  And this time, for the first time, he wouldn't be on the winning side.  Where else to go? What else to do?  Probably too late to say he was sorry, but he could at least say a real goodbye.  Never had the chance to do that before, so at least that would be something.

Chaz checked his sidearm.  The clip was full.  He exited the tent on his way to the motor pool.  He knew there'd be at least one Jeep gassed up and ready to go.  Several men watched him go by, but said nothing.  Seeing Private Jones exiting his bunk tent, Chaz stopped.

"Your marching pack provisioned and ready to go?"

Jones ducked back inside the tent, and returned a few minutes later with his pack on and in full combat gear.

"That was quick, Jones.  You're a good soldier."

Jones relaxed, but was obviously keen to go.

"Give me your pack.  And your automatic weapon."

Jones handed over his pack, and his weapon.  This time, Chaz saluted the private.  Jones reluctantly returned the salute, but looked confused.

Chaz made one more stop before hitting the motor pool.  He threw the flap open on the officers' tent and went inside.  There were four bunks, but his was the only one used in weeks.  He dialed the lock on his foot locker, and pitched the lock.  Rummaging through, he tossed his commander's log, a shave kit, and some good boots before finding the half-full bottle of whiskey.  "Damn, I thought there was more."  Moving to the next bunk, he used the butt of his automatic weapon to try breaking the lock. When that didn't work he just shot the lock off.  Rummaging around, he found the usual clothes, boots, and letters from home.
At least some of us get letters
, he thought.  But no booze.  "Wilkins, you always were a pussy.  What kind of officer goes to war without at least one bottle stashed somewhere?"  He shot the other two locks off, and was rewarded for his effort.  One full Jack Daniels and one bottle of dark rum.  As Chaz exited the tent, he found Jones and a few others milling around. They looked like they were going to draw straws for who would check his tent for bodies.

"Nothing to see here, boys.  Just one soon-to-be-drunk soldier about to desert his platoon and start searching for ghosts."

One of the enlisted had the nerve to speak.  "Sir, you can't do that.  Who's gonna be in charge?"

The men just stared, dumbfounded; even Jones had nothing to say.

Chaz continued his walk to the motor pool. He did a quick inspection of the first Humvee in line, and jumped into the driver's seat.  Sure, this thing was designed for a group of two to four, but what the hell?  So, he couldn't fire the turret and drive at the same time.  Shooting freaks wasn't his main concern. "Gas? Check!  Guns? Check! Bullets? Check! Whiskey? Check!  Time to motor!"

With that, Chaz started the engine and headed east.  He figured that before he got to Atlanta, odds were one of two things would happen.  Either he'd be eaten by zombies, or court-martialed by the army.  He didn't care which.  The less likely third option was getting there alive, and finding his family.  The first two options he understood, the third one scared the hell out of him.  But that's the one he hoped for the most.

Soul Harvest: The World Takes Sides by Lahaye, Tim, Jenkins, Jerry B.
Starship's Mage: Episode 2 by Glynn Stewart
Dealing With the Dead by Toni Griffin
Heart of Stars by Kate Forsyth
In Love with John Doe by Cindy Kirk
Bought by the Billionaire Brothers 5 by Alexx Andria
Undertow by Leigh Talbert Moore
The Companion by Susan Squires
The Lynnie Russell Trilogy by R. M. Gilmore
Castle Orchard by E A Dineley