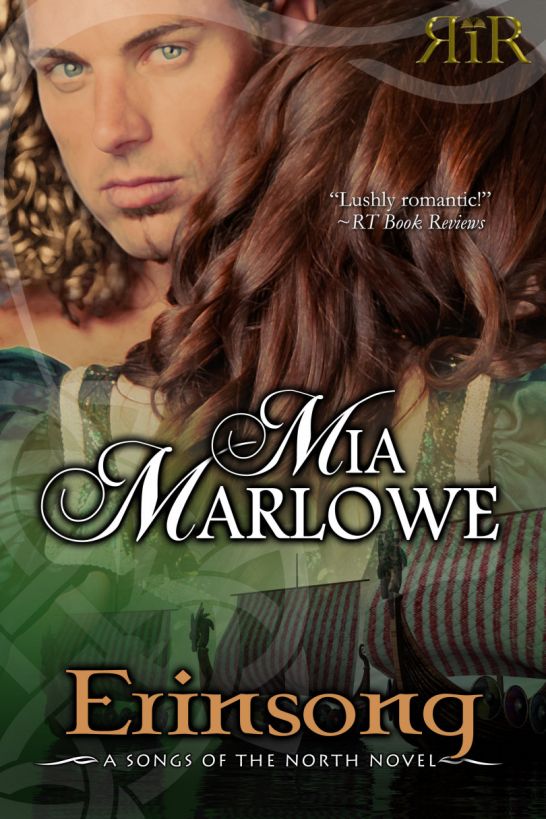 “
Erinsong
is lushly romantic.
(Marlowe) captures the atmosphere of early Ireland, gifting us
with a lovely, sweet story of love’s power to overcome hate and
fear.”—
RT BOOKReviews

“(Marlowe) creates an aura...in this story
that indulges her readers and leaves them wanting more.
Erinsong
is
a powerful love story, rich in vivid detailing, strong
characters and a hero and heroine who touch your heart in places
you didn’t know existed.
Erinsong
is a masterpiece. I loved
this captivating story and you will too.”—
Fresh Fiction

“A brilliantly told tale...
Erinsong is
romantic, emotional, and very memorable and will leave readers
wanting more. A lush and richly developed historical with vivid
detailing and forbidden love....I was drawn to the characters in a
way that had me wishing the story would never end. A moving
portrayal of love conquering all,
Erinsong is
a ‘keeper.’
Bravo!”—
Historical Romance Writers

“
Erinsong is
simply wonderful...so
well-told and the characters so riveting that I couldn’t help but
fall right into the story....If you’re looking for a book to while
away a long winter day, this should do it— along with a cup of
coffee and a good fire, you’ve got a perfect cure for the winter
blues.—Desert Isle Keeper Designation!”—
All About
Romance

“Brings both Scandinavia and the exotic
eastern city known to the Vikings as Miklagard to life through her
strong characters. Readers will watch for her next historical
romance.”—
Booklist

“From Scandinavia to the Byzantine slave
markets, this steamy love story calls to mind the great mistresses
of the genre: Small, Henley and Mason. Filled with forbidden love,
betrayal, redemption and hope.”—
RT BOOKReviews

“A fresh new voice in romance. Dramatic and
stirring,
Maidensong
will leave you clamoring for
more.”—Connie Mason,
New York Times
Bestselling Author of
Sins of the Highlander

“Fast-paced and extremely enjoyable. If you
enjoy a passionate tale told across the tapestry of a well-woven
historical backdrop, then you must pick up this.”—
Historical
Romance Writers

“
Maidensong
takes us on a whirlwind
journey.... an incredible amount of storytelling talent. Take this
wonderful journey—you’ll be glad you did.”—
Fresh Fiction

A VIKING BY ANY OTHER NAME...

“Is that all I am in your eyes? Just a
Northman?” When Brenna tried to pull away, he tugged her in close
and cupped her chin. “Can you not say my true name? Not even
once?”

He leaned toward her, his deep eyes dark in
the moonlight. His mouth was so close, one corner turned slightly
up. Brenna gulped, wondering what that mouth might taste like.

The name was nearly swallowed up as his lips
covered hers in a kiss both sudden and inevitable. Her first
impulse was to pull away, but his mouth beguiled her. It was not
the kind of kiss she expected from a man like him.

His mouth was warm and sure, pressing against
hers just enough to let her know she’d been kissed before he pulled
back. It was as sweet a kiss as she could imagine. A kiss that
wanted to give, not take. A kiss that left no bitterness in its
wake.

“There now, that wasn’t so terrible, was it?”
he asked.

“Saying your name or letting you kiss
me?”

Her lips twitched in a suppressed smile. “It
was tolerable.”

“Just tolerable?” He grinned. “I know can do
better than that.”

At the end of
MAIDENSONG
Bjorn’s friend Jorand vows to set off on a three
year sojourn to see the wide world and have some adventures of his
own.

When my husband and I
visited Ireland and saw the fabulous artistry in the Book of Kells
at Trinity University, I decided I wanted
to write about an Irish heroine who had mastered the art of
illuminating manuscripts. Then when I learned that Dublin started
as a Viking over-winter settlement, I knew where Jorand ended up
after his adventures with Bjorn and Rika in the first book. The
kernel of the idea behind ERINSONG was born.

P.S. In case you’ve been wondering what Rika
and Bjorn have been up to since the end of MAIDENSONG, you’ll be
happy to know you’ll see them again in ERINSONG. Enjoy!

All rights reserved. No part of this book may
be reproduced or transmitted in any form or by any electronic or
mechanical means, including photocopying, recording or by any
information storage and retrieval system, without the written
permission of the publisher, except where permitted by law.

A shriek rent the air.

Brenna dropped the bucket of mussels and ran
toward the sound. She shouldn’t have let Moira wander away. If
anything happened to her younger sister, their father would never
forgive her.

Fear made her wing-footed.
When she rounded
the outcropping of dark
basalt, she found Moira cau
tiously
circling a body on the sand. A man was curled
on his side, one long arm draped over a wooden
cask.

Brenna breathed out a sigh.
God be praised, Moira
was
unhurt.

“Is he dead, do ye think?” her sister
asked.

“Seems to be.” Brenna used
the butt of her walking
stick to push the
man’s shoulder and roll him onto
his back.
He flopped over as lifelessly as a beached
porpoise. Dark blood crusted at his hairline where he’d
obviously taken a blow.

The stranger was even more
heavily muscled than
the local smith, and
though he wasn’t stretched out
to full
length, Brenna could see that if he were stand
ing upright, he would be far taller than any man in her
father’s keep. His pale hair was a tangled mess, but even dusted
with brine and sand, the man’s face
reminded Brenna of the fierce warlike angels painted
on the scriptorium walls at Clonmacnoise Abbey—
stern and forbidding, but heart-stoppingly beautiful.

Brenna’s gaze fell on the
runic symbols carved into
the hilt of the
knife at the man’s waist. Her lip curled
with loathing. “One of the
Normanni.”

“A
Northman?” Moira leaned closer to him. “Mother used to
frighten us with stories of Northmen when we were little, but even
though they’ve raided near us, I’ve never seen one in all me
living
life.” She cocked a questioning
brow at Brenna. “Do
ye mean to tell me ye
have?”

“Aye, though I wish I had
not.” Brenna’s voice was
flat and she
raised the pointed end of her staff toward
the still figure.

“Are all Northmen so fair, then?”

“No, not all,” Brenna said through a clenched
jaw.

“This one surely is. He’s so pretty. ‘Tis a
pity he’s dead.” Moira bent to smooth a damp lock of hair from the
man’s cheek.

Suddenly his eyelids flew open, and he
grabbed Moira’s wrist. She screamed and tried to pull away, but the
stranger’s grip was firm.

No, not this time.

White-hot rage surged
through Brenna and a low
growl erupted
from the back of her throat. The
Ost
man
heathen dared put his filthy hand on her sister.
Almost in reflex, she jabbed his thigh with her
staff,
burying the sharp point into his
flesh. Her stomach lurched at the way the shaft stuck, embedded in
the
man’s heavy muscle. Brenna jerked
backward on it, but couldn’t pull it free for another
stab.

The good nuns at
Clonmacnoise had admonished her that anger, or any other strong
passion for that
matter, was a sin. But
Brenna knew if she were able,
she’d pound
the man into raw meat before the fury inside her was
quelled.

Eyes wide with surprise, the stranger howled
and released Moira.

“Run!” Brenna ordered. Her
younger sister fled, dis
appearing around
the rocks, fleet-footed as a hind.

The man wrapped his long
fingers around Brenna’s
makeshift spear
and yanked it from his leg with a grunt and a spurt of blood. Then
he jerked the other end of the staff from her grasp.

Despite his injury, the man
rose to his feet, blood
spreading on his
dun-colored leggings and streaking
toward
his knee. He tossed her stick into the gorse bushes. Then he turned
to face her, his handsome features marred by a black
frown.

For one paralyzing moment,
Brenna couldn’t
breathe. The lapping of
the waves played over in her
head like a
half-remembered song. A gull screamed and she was sharply aware of
the fishy reek of the sea. She couldn’t move. Just like before when
a Northman blocked her way.

She feinted to throw him off balance, then
turned and raced down the beach in the opposite direction Moira had
fled. She heard the man’s footfalls pounding behind her and
lengthened her stride. He shouted something to her in an
evil-sounding language, and though his tone wasn’t threatening, she
wouldn’t be tricked by the likes of him.

The man
lunged, wrapping his arms around her waist. Brenna pitched
headlong into the gritty sand. They rolled to
gether, over and over, Brenna scrambling to get
away, the man grasping at her to keep her with
him.
When they finally came to a stop,
Brenna was pinned
beneath the big man’s
body.

“Get off me, ye
Finn-Gall
demon!” Brenna
pum
meled his chest with her fists. The man
caught up
her hands and pressed them into
the sand above her head. She flailed her feet trying to kick him,
but he
wrapped his long legs around hers,
binding her fast.

All she had left were
words, and she spewed out the most hateful curses she’d ever heard.
She invoked every plague imaginable to rain down on the
stranger’s golden head and offered his immortal
soul
to Beelzebub with all the venom she
could muster.

The man didn’t blink an
eyelash, his impossibly
blue eyes going
darker by the moment. His face hov
ered
over hers, his expression unreadable. He let her
rant until she was utterly spent and
gasping.

“That’s the best string of
insults I’ve ever heard,”
he said calmly.
The corners of his mouth turned up in
a
wry smile despite the furrow between his dark brows.

Brenna felt the blood rush from her face.

“Let me see. You seem to
think I’m something
called an incubus from
the Netherworld and you invited the Prince of Darkness, whoever he
is, to feast
on my liver.
J
a,
girl, I think I understand you.”

The Ordways by William Humphrey
And the Miss Ran Away With the Rake by Elizabeth Boyle
Anywhere But Here by Paul, JL
Thicker Than Water by Kerry Wilkinson - DS Jessica Daniel 06 - Thicker Than Water
Zombies vs Polar Bears: Sirens of the Zombie Apocalypse, Book 5 by E.E. Isherwood
Longsword by Veronica Heley
The Weekend Girlfriend by Emily Walters
Prophet by Jennifer Bosworth
Return To Forever by James Frishkey
HCC 115 - Borderline by Lawrence Block