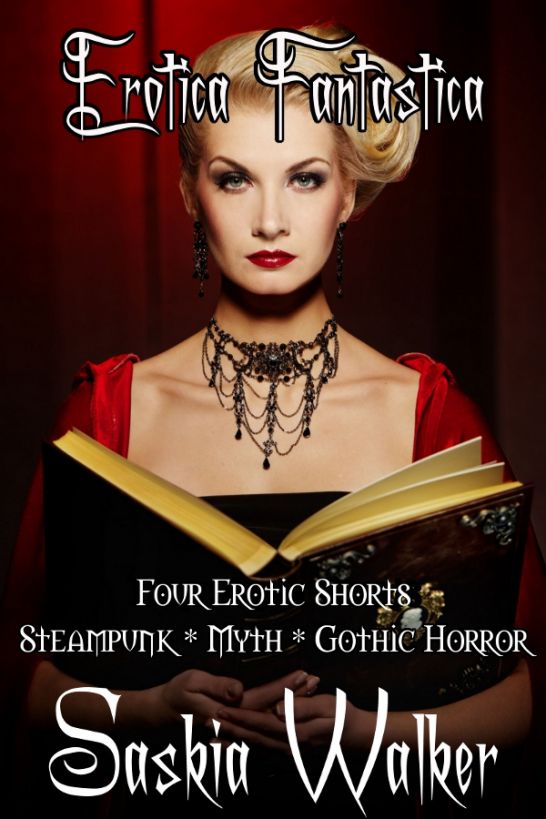 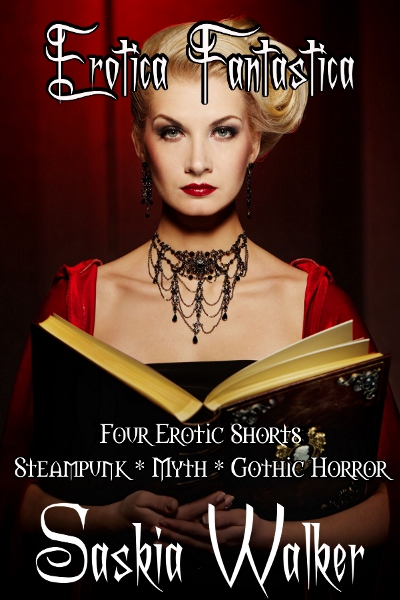 Discover other titles by Saskia
Walker at
saskiawalker.co.uk

This ebook is licensed for your personal
enjoyment only. This ebook may not be re-sold or given away to
other people. If you would like to share this book with another
person, please purchase an additional copy for each recipient. Thank you for respecting the hard work
of this author.

Heart of the
Daedalus
:

A dark and sensual green man tale. The young
maiden, Tara, sleepwalks at night, following destiny's call to the
subterranean life force that beckons to her from the graveyard
beyond the woods.

The True Folly of
Icarus
:

Where The Heart
Is
:

Heart of the
Daedalus

The True Folly of Icarus

Where The Heart Is

HEART OF THE DAEDALUS

Moonlight carved an eerie path through the
low-lying landscape of the Romney Marshes, solidifying the patches
of mist that gathered over the sodden ground. The area was riddled
with inlets of water and bog, making a treacherous journey for
anyone who dared go there. Nina Ashford scanned the ground ahead
and soothed her mount, encouraging the horse along the narrow path.
It was a familiar track to Nina for she had grown up in a nearby
village, but it was dangerous nonetheless. Her mount huffed on the
cold night air, picking its way carefully.

The clear sky was in her favor, which was
some mercy, but her attire was not. She'd come straight from a
formal supper and hadn't had time to change out of her best evening
gown. Word had reached her of the whereabouts of the Daedalus and
she'd grasped the opportunity to view it in secret. Fetching her
cloak, she'd paused only to strap her pistol to her ankle boot and
her sword to her flank—wary of brigands and smugglers on the
marshes—then raced out into the night lest the Daedalus be moved
elsewhere. The man who had so callously stolen her designs for the
machine had enormous wealth at his disposal. He could easily toy
with it then cast it aside. The knot in her chest tightened as she
thought on it, but it only served to strengthen her resolve. She
had to see her beloved creation, now. Pursing her lips, she pressed
on determinedly.

Up ahead she spied her quarry, a smuggler's
den—a long and low shelter in a dug out pit, built from old planks
covered over with slabs of peat and tuft of grass to conceal the
moorings and storage space within. It was here that she'd been told
the prototype had been hidden. The machine had been engineered and
built elsewhere, so why was it here? The question went unanswered
as the lure of the Daedalus drew her on. A steady plume of smoke
rose from the rear of the shelter, making her wary. Her informant,
an old friend, had told her no guards had been employed. Apparently
it had been deemed unnecessary in this lonely, barren place.
However, Nina approached with caution. Dismounting, she secured her
horse beneath a cluster of trees and edged closer to the ramshackle
building by foot.

At the entrance she peered
inside the gloomy interior. Somewhere a light shone. As she became
accustomed to the limited light she realized it was coming from
inside the huge metal construction. Her breath caught as her chin
lifted to take in the outline of the immense machine.
Mine.
Her sense of pride
swelled. How she had pored over drawings of this creation, this
beautiful machine. Inspired by her research on insects, she had
imagined a machine that would emulate their ability to react, to
leap, to track, and to hunt. And here it was—part spider, part
praying mantis, engineered in metal and powered by combustion
engine.

The pod-like body was designed to rise from
the ground on eight legs, strong but spindly, each leg made
invincible by internal springs that provided enormous flexibility.
She wrapped her hand around one of the legs, her emotions running
high. It had been a fanciful artistic creation, but seeing it
constructed in solid metal took her breath away. Awestruck, she
made her way around the machine. At the side she heard the low
throb of the combustion engine. She ran her hand along the
underbelly and felt its heat. Smiling fondly, she felt as if she
had been reunited with long-lost kin. She'd come there angry,
possessive and thwarted, and yet seeing her design realized as a
complete construction made her hands tremble with excitement.

At the rear of the machine she found a metal
ladder that dropped from the vessel to the ground. It wouldn't hurt
to have a quick look, she decided, then hitched her skirts and
clambered up. Cautiously, she opened the hatch. Inside it was
gloomy, but toward the front of the pod an oil lamp stood on a
brass surface, giving out a warm, inviting light. She paused, still
wary, but heard no sound other than the low rumble of the
combustion engine in dormant mode. Unable to resist, she climbed
inside.

Nothing could have prepared her for the
beauty of the interior. Where solid sheets of sturdy welded metal
studded with bolts and rivets characterized the exterior, inside it
was all gleaming brass dials and copper pipes. The construction was
immaculate and finished to a high standard. She darted over to the
control panel and ran her fingers along the casement. She was so
fascinated that she did not sense the human presence behind her,
not until it was too late. When she did she tensed and turned on
her heel.

The man rose from a seat in the darkness
beyond the hatch.

Her hand went to the pommel of her
sword.

"What have we here," the man drawled, "a
thief in the night who dares to touch my precious creation?"

The statement was meant to provoke, she knew
that. Nevertheless her anger flared. "I am no thief." She drew her
sword, pointing it around the gleaming interior of the Daedalus.
"What is this, if not theft of my design?"

She assumed an
en garde
position,
challenging him.

He stepped into the fall of light. Built
tall and large, he towered over her. She cast an eye over his
greatcoat and polished knee-length boots, taking in the fitted
breeches and open necked shirt beneath. His dark hair fell loosely
to his shoulders and his eyes were shadowed under drawn-down brows.
Stubble marked his jaw. The rugged build of his features looked
starker still in the half light. The sight of him made her will
strong and her legs weak.

He moved swiftly, his sword out and clashing
against hers. "And you?" he responded, with amusement. "Lurking on
the marshes in the midnight hours, like a common smuggler." With
consummate skill he traded thrusts and parries with her, his blade
ringing against hers.

Her heart raced wildly, but gritty
determination to equal him drove her on.

He nodded approvingly at her maneuvers. "I
have to admit your fencing has improved somewhat since our last
meeting, my dear."

Nina smiled. She had been taking lessons.
However his compliment distracted her and before she could draw
breath he knocked the sword from her hand. Cursing, she glared at
him. His blade flashed again, splicing the fabric of her bodice
between her breasts.

Furious, she backed away and clutched her
hands to the polished brass panel behind her. "Dishonorable as
ever, I see, Dominic Bartleby."

"Particularly where you are concerned, my
beauty." He ran the tip of his finely crafted blade into the torn
fabric at her cleavage, as if daring her to move.

She glared down at her torn gown. He'd
done it on purpose. "I suppose you find that
entertaining?"

"Very." He laughed softly. "And I do like to
see that wild flush in your cheeks."

In an attempt to stifle the rise and fall of
her chest, she bit into her lower lip.

When the blade skimmed over the surface of
her corset, a quiet moan escaped her.

Dominic raised an eyebrow, his mouth lifting
in a sardonic smile.

"You never did play fair," she stated.
Smarting, she pushed his blade aside and covered her torn gown with
her cloak. "The least you can do is allow me to experience the
Daedalus now that it has been built."

He stepped back and bowed, but his pleasured
smile didn't escape her notice. He wanted this—he wanted her to be
needy and grateful for the chance to see it and touch her own
creation. How infuriating it was to have been caught here. Even so,
her body responded as it always did to his proximity and attitude,
as if his very presence infected her blood with a fever of longing
that she could neither deny nor ignore. Damn him. Bracing herself
for his mockery and cheek, she took another look at the control
area of the vessel, studiously avoiding the place where he stood.
"Why did you do it? Why did you build it?""

He took an age before he responded. "Because
it was a superlative design."

She shot him a glance. He'd teased her about
her designs, calling them impossible frippery. She'd always known
that his engineering skills could make them solid and true, but
he'd not taken her seriously when they'd been together. "The real
reason."

He nodded, deferring to her skepticism.
"Your design was outrageous…wild, and seemingly unattainable." His
gaze roved over her. "It was perfect in every other way."

He met her stare. She scowled at him.

"The Crimean war raised many issues," he
continued in a more serious tone. "The world is changing. Britain
may be an empire and an island but our coastline is still
vulnerable. I presented your design to Parliament and offered to
build a prototype from my own funds. I suggested it could be used
to guard shallow waters and low-lying areas such as this, the
Romney Marshes, places that would be our frontline if invasion
should threaten." He gave a sardonic smile. "Given the problem we
already have with smugglers here on the marshes, Parliament
practically snatched the contract from my fingertips."

Nina's fury built. The way he so blatantly
told her what he'd done with her design was utterly galling.

Kid Gloves by Anna Martin
The Dragon Keeper by Robin Hobb
A Gentleman Undone by Cecilia Grant
AWOL on the Appalachian Trail by Miller, David
On the Line (Special Ops) by Montgomery, Capri
Cold Moon (The Huntress/FBI Thrillers Book 3) by Alexandra Sokoloff
5 Conditioner and a Corpse by Cindy Bell
Spring Equinox: Celestial Seductions, Book 2 by Bradley, Eden
Mr Gum and the Power Crystals by Andy Stanton
More in Anger by J. Jill Robinson