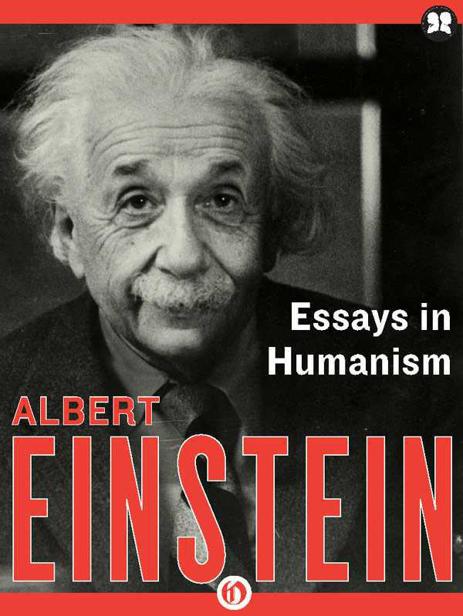 9. Open Letter to the General Assembly of the United Nations (1947)

11. For an Organization of Intellectual Workers (1945)

Just What Is a Jew?

Where Oppression Is a Stimulus

37. Before the Monument to the Martyred Jews of the Warsaw Ghetto (1948)

A Biography of Albert Einstein

IS IT ADVISABLE
for one who is not an expert on economic and social issues to express views on the subject of socialism? I believe for a number of reasons that it is.

Let us first consider the question from the point of view of scientific knowledge. It might appear that there are no essential methodological differences between astronomy and economics: scientists in both fields attempt to discover laws of general acceptability for a circumscribed group of phenomena in order to make the interconnection of these phenomena as clearly understandable as possible. But in reality such methodological differences do exist. The discovery of general laws in the field of economics is made difficult by the circumstance that observed economic phenomena are often affected by many factors which are very hard to evaluate separately. In addition, the experience which has accumulated since the beginning of the so-called civilized period of human history has—as is well known—been largely influenced and limited by causes which are by no means exclusively economic in nature. For example, most of the major states of history owed their existence to conquest. The conquering peoples established themselves, legally and economically, as the privileged class of the conquered country. They seized for themselves a monopoly of the land ownership and appointed a priesthood from among their own ranks. The priests, in control of education, made the class division of society into a permanent institution and created a system of values by which the people were thenceforth, to a large extent unconsciously, guided in their social behavior.

But historic tradition is, so to speak, of yesterday; nowhere have we really overcome what Thorstein Veblen called “the predatory phase” of human development. The observable economic facts belong to that phase and even such laws as we can derive from them are not applicable to other phases. Since the real purpose of socialism is precisely to overcome and advance beyond the predatory phase of human development, economic science in its present state can throw little light on the socialist society of the future.

Second, socialism is directed towards a social-ethical end. Science, however, cannot create ends and, even less, instill them in human beings; science, at most, can supply the means by which to attain certain ends. But the ends themselves are conceived by personalities with lofty ethical ideals and—if these ends are not stillborn, but vital and vigorous—are adopted and carried forward by those many human beings who, half unconsciously, determine the slow evolution of society.

For these reasons, we should be on our guard not to overestimate science and scientific methods when it is a question of human problems; and we should not assume that experts are the only ones who have a right to express themselves on questions affecting the organization of society.

Innumerable voices have been asserting for some time now that human society is passing through a crisis, that its stability has been gravely shattered. It is characteristic of such a situation that individuals feel indifferent or even hostile toward the group, small or large, to which they belong. In order to illustrate my meaning, let me record here a personal experience. I recently discussed with an intelligent and well-disposed man the threat of another war, which in my opinion would seriously endanger the existence of mankind, and I remarked that only a supranational organization would offer protection from that danger. Thereupon my visitor, very calmly and coolly, said to me: “Why are you so deeply opposed to the disappearance of the human race?”

I am sure that as little as a century ago no one would have so lightly made a statement of this kind. It is the statement of a man who has striven in vain to attain an equilibrium within himself and has more or less lost hope of succeeding. It is the expression of a painful solitude and isolation from which so many people are suffering in these days. What is the cause? Is there a way out?

It is easy to raise such questions, but difficult to answer them with any degree of assurance. I must try, however, as best I can, although I am very conscious of the fact that our feelings and strivings are often contradictory and obscure and that they cannot be expressed in easy and simple formulas.

Man is, at one and the same time, a solitary being and a social being. As a solitary being, he attempts to protect his own existence and that of those who are closest to him, to satisfy his personal desires, and to develop his innate abilities. As a social being, he seeks to gain the recognition and affection of his fellow human beings, to share in their pleasures, to comfort them in their sorrows, and to improve their conditions of life. Only the existence of these varied, frequently conflicting, strivings accounts for the special character of a man, and their specific combination determines the extent to which an individual can achieve an inner equilibrium and can contribute to the well-being of society. It is quite possible that the relative strength of these two drives is, in the main, fixed by inheritance. But the personality that finally emerges is largely formed by the environment in which a man happens to find himself during his development, by the structure of the society in which he grows up, by the tradition of that society, and by its appraisal of particular types of behavior. The abstract concept “society” means to the individual human being the sum total of his direct and indirect relations to his contemporaries and to all the people of earlier generations. The individual is able to think, feel, strive, and work by himself; but he depends so much upon society—in his physical, intellectual, and emotional existence—that it is impossible to think of him, or to understand him, outside the framework of society. It is “society” which provides man with food, clothing, a home, the tools of work, language, the forms of thought, and most of the content of thought; his life is made possible through the labor and the accomplishments of the many millions past and present who are all hidden behind the small word “society.”

It is evident, therefore, that the dependence of the individual upon society is a fact of nature which cannot be abolished—just as in the case of ants and bees. However, while the whole life process of ants and bees is fixed down to the smallest detail by rigid, hereditary instincts, the social pattern and interrelationships of human beings are very variable and susceptible to change. Memory, the capacity to make new combinations, the gift of oral communication have made possible developments among human beings which are not dictated by biological necessities. Such developments manifest themselves in traditions, institutions, and organizations; in literature; in scientific and engineering accomplishments; in works of art. This explains how it happens that, in a certain sense, man can influence his life through his own conduct, and that in this process conscious thinking and wanting can play a part.

Man acquires at birth, through heredity, a biological constitution which we must consider fixed and unalterable, including the natural urges which are characteristic of the human species. In addition, during his lifetime, he acquires a cultural constitution which he adopts from society through communication and through many other types of influences. It is this cultural constitution which, with the passage of time, is subject to change and which determines to a very large extent the relationship between the individual and society. Modern anthropology has taught us, through comparative investigation of so-called primitive cultures, that the social behavior of human beings may differ greatly, depending upon prevailing cultural patterns and the types of organization which predominate in society. It is on this that those who are striving to improve the lot of man may ground their hopes: human beings are
not
condemned, because of their biological constitution, to annihilate each other or to be at the mercy of a cruel, self-inflicted fate.