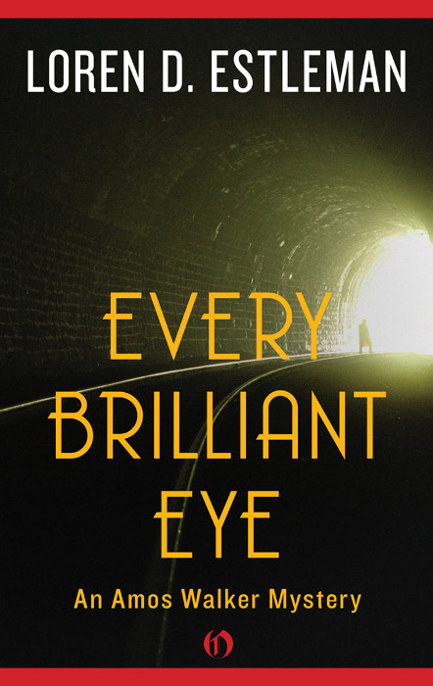 For my mother and father

A Biography of Loren D. Estleman

I
DROVE THE LAST
twelve miles back to Detroit on the heels of a late-summer rainstorm that had the drains gurgling and my wipers swamping brown wash off the windshield from the tanker in front of me. I’d have passed it except it was doing seventy on the double nickel and I needed the help to get home without attracting red flashers.

The truck was the first good thing that had happened to me all weekend. I had picked up a computer software salesman on a routine tail job in Drayton Plains Friday afternoon. It was now three-thirty Sunday morning and I hadn’t been out of the car except to grab a burrito and visit a service station, having gotten my fill of the back side of Toledo and points in between while my subject ran his samples for vice presidents in Purchasing and took their secretaries to various motels to continue his pitch. If I’d been working for the guy’s wife it would have been a productive weekend. But his firm had hired me to find out if he was running his own game and so far as I could tell he hadn’t left his assigned route. I had made the mistake of calling in my report and now they were shipping out a company man to pick up the baton. Sunday morning canned is a lousy place to be.

I left the tanker at the Chrysler interchange and drove along shining funereal streets to my neighborhood, slowly now to catch Julie London’s last few whispered phrases on the radio. She was singing about apple trees and sunlit memories like someone who had been living underground a long time. I sang along.

That year as in all the others I was living in a bedroom, bath, kitchen, and living room under a roof that had needed shingles since Hiroshima. Now the Japs were building better cars than Detroit, but the roof still leaked when there was snow on it. Replacing the shingles had come fifth on the list of things I had promised someone I’d do when I bought the place. Leaving me had come first on hers.

I parked in the driveway, too wasted to pry open the garage. The stale air inside the house stirred when I fanned the front door. I wound the clocks, read my mail, and put my investigative talents to work on the refrigerator. Inside were a can of beer and a slice of pizza growing gray penicillin like old bums’ whiskers. I wasn’t in a mood for either. From the cupboard over the sink I hoisted down a bottle of Scotch and a barrel glass. I ran water into the glass from the tap. My hand shook when I unscrewed the cap from the bottle.

That was enough for me. I screwed the cap back on and drank the water and put away the bottle and glass. Thirty-six hours in a car with just the radio for company would have anyone’s nerves dancing. But I wasn’t taking chances. Instead I put on some coffee and smoked my last cigarette.

The percolator and the door buzzer went off together. On my way through the living room I glanced at my great-grandmother’s Seth Thomas. Ten after four. I got my .38 out of the drawer in the lamp table before undoing any locks.

The redhead standing on my stoop wasn’t pretty. She was too tall and bony in an expensive blue dress that fit her like a sail and she sprayed her hair in hard waves so that it looked like combed copper and when she smiled, every Shrove Tuesday, her gums showed. But she never had to bruise her nails on a doorknob where there was a man around. She modeled fashions for the two major local magazines and entertained convention scouts for an area hotel chain while the cops were busy rousting the street trade, which shows how much they know. Her heavily inked eyes took in the gun.

“They should tear down the big tire display outside town,” she said. “Put up a sixty-foot revolver in its place.”

“Thanks. My watch stopped and you were the only friend I could think of who tells time.”

“You and Barry are.”

She said it was. I stood aside, closed the door behind her, and tucked the revolver into its drawer. She stood in the middle of the room lazily running her hands up and down her upper arms. It was a cool night for August and she wasn’t wearing a jacket. “Cold.”

“The furnace hasn’t been running. I’ve been away.”

I went back into the kitchen and turned off the coffee and introduced some Scotch to some water in two glasses. Good intentions never live long around me. My hand was steady now, anyway. When I returned carrying the drinks she was sitting on the sofa with her legs crossed. She had thick ankles and no flesh on her knees. I handed her one of the glasses and stood holding the other.

“That’s better.” She set down her glass a third empty on the chipped coffee table. Looked around. “Is this how you live?”

“The chandelier’s out being cleaned, sorry. What about Barry?”

“You haven’t seen him lately or you wouldn’t have to ask. He’s drinking again.”

“I didn’t know he stopped.”

“For five weeks. He fell off so hard he’s still bouncing.”

“It’s the symptom, as they say. I don’t know what the problem is. You’re the detective.”

“Right. Not a psychiatrist. Where is he?”

“The bars are closed.”

“The blind pigs are just warming up. He spends most of his time at a place called the Inner City Action Council, over the A-l Hardware on Clairmount.”

“Whatever happened to ‘Joe’s’?”

“Those civic betterment names sound good in court,” she said.

I said, “He’s looking for an extra smile under his chin.”

“He needs taking out of there before he gets one.”

“He’ll just turn around and go back in. Unless I hide his artificial leg.”

“If you had any of your own you wouldn’t draw that like a knife.” I ate some Scotch. “How long’s he been showing up at this place?”

“Uh-huh. Why’s tonight worse for him than all the rest?”

She ran a finger around inside her empty glass and tasted it, but I wasn’t taking hints today. She put the glass back on the table, not gently. “I’m getting out. My clothes are in the car. I’ve been sitting on them across the street for an hour waiting on you.”

“So get out. Who’s standing on your foot?”

“My old man taught me never to leave a campsite without cleaning up first. I want to see him in good hands before I go. Hands, anyway. You don’t live with someone a year and then just walk without seeing he gets put back up on the shelf.”

She smiled then, uncasing her gums. When she did that she looked like a horse. Not a showhorse; a stomper. “You never did like me. That’s why you haven’t been to see Barry in so long. Somebody somewhere must’ve spiked you pretty good.”

“No.” She stood, hauling up her shoulderbag strap the way they do. “Tell him Irene said to have a good life. I’ve got friends who will put me up till I find a place. He shouldn’t look for me.”

She thought about it a second, decided it wasn’t worth getting mad over, and said, “You’ll notice a change in Barry.”

I waited, and I was still waiting when she went out, leaving me to close the door behind her. After a moment I emptied my glass and retrieved my keys from the kitchen table.

T
HE CAR WAS GETTING OLD.
The steering wheel shuddered above fifty and when the lights stayed red too long the carburetor coughed and swallowed its tongue. It needed parts worse than I did, but I still owed my mechanic for the fuel pump he’d installed last May. In the world of self-employment my busy periods were slower than most people’s down time. I nursed the Olds through a string of lights on Calvert and blew out the carbon when I hit Dexter. The streets were wet and empty, like my stomach.

Barry Stackpole went back longer with me than anyone else except Lieutenant John Alderdyce of Seventh Squad Homicide. Barry had been a correspondent covering the U.S. push into Cambodia from the bottom of a shell crater when I fell on top of him. One leg, two fingers, and a broken skull later, he was a syndicated columnist with the Detroit
News.
His beat was organized crime, and he owed the missing parts to a modest sort named Vincente “Big Bang” Bagliano, whose son was now in charge of the Neighborhood Watch program in Birmingham. They buried Big Bang in hallowed ground a couple of years back when he choked to death on a raw oyster.

After his release from the hospital, Barry had been a clay pigeon for a while, getting his mail at his office in the
News
building and never living in the same place longer than two weeks. But the current generation of
capos
was substituting dollars for dynamite and with the streets belonging to the lead pipes and scuffed leather jackets no one was much interested in the organized variety anymore. These days he was renting a house in Harper Woods, and the last time I had heard from him he was writing a book.

None of whatever had happened to him since was really Irene’s fault. It never is. There is an Irene waiting somewhere for every one of us, to hand us a martini mixed in the same room with a bottle of vermouth and pillow us with her breasts and say, there, there, they just don’t know what they’ve got in a man like you. The trick is to recognize her and cross the street when we see her coming. By which time, of course, it’s too late.

Back when Rosa Parks Boulevard was still Twelfth Street, before the ‘67 riots, it had sometimes been called Sin Alley, but that was just newspaper talk. Detroiters who were still thirsty when the legitimate bars closed at two knew it as The Strip, a place where a drink or a woman could be had any time of the day or night. You know it. They might call it the Tenderloin or the Combat Zone in your city, but during an election year or ratings sweep weeks the local TV stations in towns three thousand miles apart could swap footage and you wouldn’t see any difference. You know it by the neon and by Aretha Franklin wailing out of the open windows and by the black girls shivering on the corners in their short skirts and high boots.