Read Every Time with a Highlander Online

Every Time with a Highlander 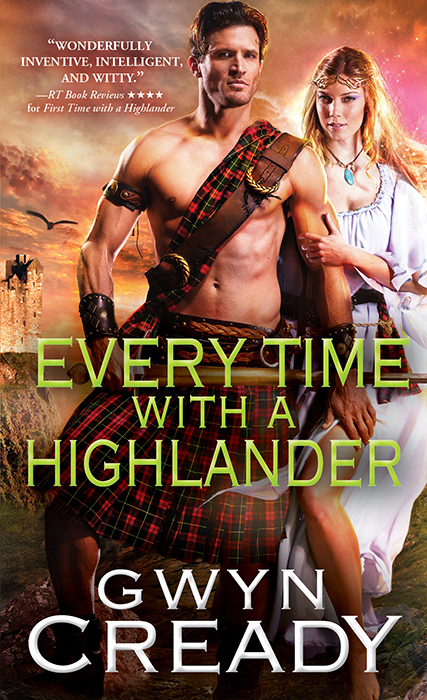 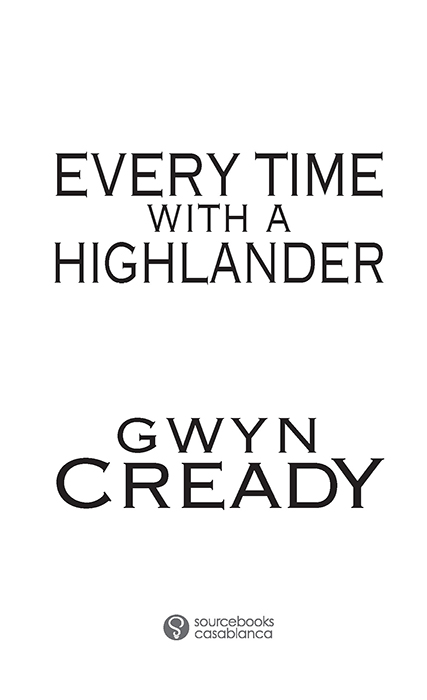 Thank you for purchasing this eBook
.

At Sourcebooks we believe one thing:

We would love to invite you to receive exclusive rewards. Sign up now for VIP savings, bonus content, early access to new ideas we're developing, and sneak peeks at our hottest titles!

All brand names and product names used in this book are trademarks, registered trademarks, or trade names of their respective holders. Sourcebooks, Inc., is not associated with any product or vendor in this book.

For Carol Scott Cready and James W. Cready. Thank you for three gifts I treasure deeplyâintelligence, curiosity, and humor.

Peering from the shade of the massive copper beech on the banks of the sparkling Tweed, Lord Bridgewater's feast set out on long, low tables under the shade of the nearby elms, Undine looked from guest to guest and lover to lover. She was, they said, a fortune-teller, and it was little challenge to read the thoughts on the faces of those she called her friends at the partyâAbby Kerr, chieftess of Clan Kerr, and Abby's steward, Duncan MacHarg, standing at opposite ends of the makeshift quoits court, hiding their infatuation about as well as a peacock hides its plumage, and soon-to-be shipowner Serafina Innes and her new husband, Gerard, innocently playing whist, though any careful observer could tell by the gleam in their eyes the prize at stake was far from innocent.

Hidden truths and visible lies. The world would be a very dangerous place if one believed in appearance.

“Thank you. I believe I'll stay with my ginger water.”

A sleek, tortoiseshell cat stole her way back into the party after being shooed away not once but twice by one of the estate's fastidious servants. The cat added to her list of crimes by neatly snagging a half-eaten quail from the plate of Bishop Rothwell, the archbishop's chief catch fart, who was speaking animatedlyâand at yawn-inducing lengthâto those seated on the lawn near him of the plans to replace the draperies at his estate.

The brazen thief made her way, quail in mouth, under several tables to the copper beech, where she gave Undine an impatient look.

“Is there no other place to feast upon that?”

The answer, it appeared, was no. The cat placed the carcass on the ground, and Undine shifted a few inches on the blanket to give the creature room to enjoy her prize.

Rothwell's injured gasp cut through the buzz of the crowd. Stripped plate in hand, he looked left and right. The servant, instantly gleaning the nature of the transgression, wheeled around, scanning the grounds with murder in his eyes.

Undine obscured the transgressor with a lift of her knee.

“You will put my poor servant in his grave,” said Colonel Lord Bridgewater, sinking onto the blanket opposite Undine. Without looking, she felt the collective stiffening of her friends, and she sent them an unspoken wave of reassurance.

Handsome, blond, cruel, and powerful, Bridgewater was the most feared man on either side of the border, though the soldiers in the English army grudgingly admired his political and battlefield skills as much as they chafed under his stringent command. This was his parkland, his party, and his house, leased only, as his ancestral home was ensconced in a far more civilized part of England, not straddling the bloody divide between the country he loved and the one he would drive to its knees unless someone stopped him.

That someone was Undine, and she, as it had come to pass, was his fiancÃ©e.

“Who's this?” he asked, eyeing the cat, who continued her noisy evisceration of the quail.

“An admirer of your cook's talents, it seems.” Undine looked across the patchwork fields of green and gold and the scattering of buildings in the small town across the Tweed to the east. Over the town rose the ruins of the ancient priory gate, which once held the severed heads of traitors to England. The land did not make distinctions between countries. The river curled and stretched its way through both places, favoring neither one nor the other. If nature didn't, why did men have to? It brought them such misery.

“John, do you think it odd that, without conscious thought, I situate myself facing the Scottish hills and you the English vale?”

He chuckled, and the sound had only the tiniest edge to it. “I don't think our differences over this war will be a barrier to our happiness. 'Tis why I took this house, you knowâfor you. To demonstrate compromise is possible.”

The potion he'd swallowed, created by Undine for another pair of lovers, bound the heart of the swallower to the first person he saw for whom his regard had already begun to warm. But someone had stolen the potion from her, and it had fallen into Bridgewater's contriving hands. Driven as always by a reckless and unrelenting sense of entitlement, he'd drunk it thinking it was an aid to carnality. That part hadn't surprised her. But what had surprised her was that the person with whom he had fallen in love was her. She'd been shocked by the revelation he had feelings for her. He was a man of many repulsive appetites who used his power to take what he wanted. He had once beaten Undine nearly to death for the secrets she held, and he'd blackmailed Abby and attempted to rape Serafina, among many other crimes. Undine had no sympathy for the involuntary transformation he'd undergone. A man who took a potionâespecially one of Undine's potionsânot knowing what it was got exactly what he deserved. And though the potion had been strong enough to render him almost docile, she knew its power would eventually weaken and the true Bridgewater would reemerge. When it did, he would unleash his fury on her and anyone else he thought was responsible for his humiliating transformation to a mere thrall to a woman working to defeat him.

If she were wise, she would run. But while she would ensure her friends stayed beyond his reach, she was too dedicated a spy to pass up the opportunity afforded by agreeing to his offer of marriage, no matter how close to harm it may bring her.

She gave him a smile. “And that's what you're doing? Demonstrating compromise?”

“It is. 'Tis the only house I know which is half in England and half in Scotland. I know the mission of the English army seems unkind to you, but I believe in my heart that uniting Scotland and England is the best way to bring the Scots security and peace. 'Tis something I truly hope for. In that, at least, I think we are the same.”

He stroked her arm, and in his touch, Undine could still feel the cold steel of command.

“Besides,” he added with a wolfish smile, “I've dedicated myself to winning you over. I've won your hand. Now I wish to win the rest of you. And the day you forget the border there,” he said, tilting his head toward the river, “is the day the border between us will fall as well.”

“You're a cunning strategist.”

“You're a prize worth winning.”

He took her hand in his, and her skin prickled into gooseflesh. She reminded herself that the real prize was gaining access to the secret plans of the army, plans the rebels she worked with might use to forestall Scotland's forced marriage to England, plans that might, at this very moment, be sitting on Bridgewater's desk. The trick was to keep Bridgewater simmering without boiling over long enough to find out what she needed to know. There wasn't an inch of room for error. Spies discovered in flagrante delicto, even those affianced to British officers, would find their heads mounted on the priory gate for all to see.

“Are you chilled?” He smoothed her flesh with his carefully groomed thumb.

“Aye, a bit,” she said and adjusted the wrap over her shoulders.

“I have a proposal for you. Do you see that part of my house?”

The “house,” an enormous demi-castle built by Henry VIII as a hunting lodge, gray and implacable, stretched halfway across the lawn, piercing the sky with a very un-lodge-like crenellated tower. Henry, it seemed, had few friends here in Northumberland. Bridgewater pointed to the delicate, redbrick wing added two centuries later, grafted to the side like a rose on an oak.

“I want you to move in there.” He held up his hands to stop her protest. “Bring your friends. I have no intention of locking you up or encroaching on your privacy. I only wish to have you nearby and share more in your daily habits. In a few months, when you find yourself more acclimated to the idea of marrying, we'll have established a deep and abiding friendship.”

Even knowing how powerful the potion had beenâand she had ground every last bit of the lovage and lady's bedstraw herselfâto hear such a plaintive lover's wish come from the lips of John Bridgewater and be directed at
her
was astonishing. She'd always taken care to remind those who came to her for herbs or a glimpse of their futures that the outcome could be startling. However, it was one thing to say it and another to experience it so vividly.

She shifted. His offer was a prize beyond compare. As a guest in his house, she would have access to the most intimate reaches of Bridgewater's life. And yet the riskâ¦

“You're thinking about it,” he said, blue eyes shining. “I can tell by the look on your face.”

“I am inclined to say aye.”

He brought her wrist to his lips and kissed it. “You've pleased me more than you can know.”

The afternoon sun caught the silver tip of the priory gate and shone in her eyes as if to remind her what she risked. She held up a hand to block the ray. “And you me.”

Abby and Duncan were drawing toward them, and she straightened.

“Go tell your friends,” Bridgewater said, smiling. “Let them rejoice in our happiness.”

I doubt joy will be their reaction.

Undine made her way down the rise, debating how she'd break the news. Her last vision of Bridgewater before the beech's trunk obscured him was of him booting the cat away and tossing the poor creature's dinner in the Tweed.

Strike Back by Ryan, Chris
Scandalous by Ward, H.M.
Tails to Wag by Butler, Nancy
The Darkness Within by Kelly Hashway
A Distant Mirror by Barbara W. Tuchman
The Range Wolf by Andrew J. Fenady
A Song Amongst the Orange Trees (The Greek Village Collection Book 13) by Sara Alexi
My Rock #6 by Alycia Taylor
Crossing the Deadline by Michael Shoulders
Magia para torpes by Fernando Fedriani