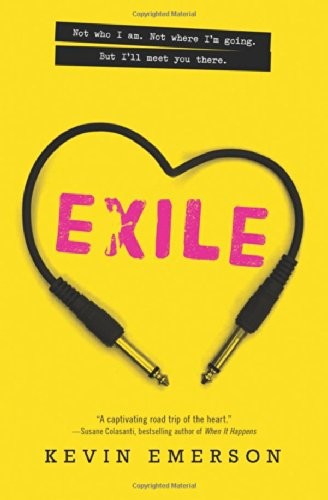 This is an advance reader’s e-proof made from digital files of the uncorrected proofs. Readers are reminded that changes may be made prior to publication, including to the type, design, layout, or content, that are not reflected in this e-proof, and that this e-pub may not reflect the final edition. Any material to be quoted or excerpted in a review should be checked against the final published edition. Dates, prices, and manufacturing details are subject to change or cancellation without notice.

For the moment between
the last stick click
and the first downbeat,
when anything can happen . . .

Where We Are Music Infinite

—posted by ghostofEliWhite on August 28

As all true music fans know, this year is the fifteenth anniversary of one of rock’s greatest triumphs and tragedies: the release of Allegiance to North’s seminal second album,
Into the Ever & After
, which dropped one year after the death of lead singer and songwriter Eli White. There is no bigger
what-could-have-been
than this phenomenally talented group out of Mount Hope, CA. From the moment they burst onto the scene with their first EP,
Forests in Cloudlight
, through the worldwide smash success of their full-length,
The Breaks
, it seemed like Allegiance was sure to be the greatest band of the new millennium. But that was before Eli White redefined the cautionary tale, ending a downward spiral into drugs by drowning in the dark Pacific at the age of 22.

And as we all remember, it was on this date fifteen years ago that Candy Shell Records leaked the now-infamous track list for
Into the Ever & After
, three months before the album’s release. Why infamous? Because the list included three songs that did
not
appear on the album, when it was finally released after
Eli’s death. Those lost songs . . . did they ever get written? No recordings have ever been found. I’ll admit, it makes me sad every time I think of what they might have been. Here’s the list:

Allegiance to North:
Into the Ever & After
Official Track List

3. The Sound of Your Smile

Just after dinner on the night before the start of senior year, Dad polishes off his guacamole garden burger, looks at me seriously, and asks, “So, now what, then?”

Tonight is also my eighteenth birthday, which means that I’ve known my dad for six thousand five hundred and seventy days, and so I probably should know that he means this question to sound supportive. Concerned, but supportive.

Yet my heart races, and all I can hear is
I told you so
.

“I don’t know, yet,” I reply, shoving the last chunk of burrito into my mouth.

“Honey, it’s senior year,” adds Mom, whom I’ve presumably known for about nine months longer, and who I
know means to sound supportive, too. But Mom wears her worry on every word.

Now what. . .
. Senior year is supposed to be the culmination, the big finale of an epic journey, but given our surroundings, I wonder if I’m going in circles instead.

We sit in a red-vinyl booth, hunched over a linoleum table decorated with a cliché painting of the Mexican desert. Around us blink the jalapeno-shaped lights and other assorted kitsch of La Burrita Feminista. Freshman year, I brought my five closest friends here for a birthday party, complete with poppers and present bags and personal piñatas, but invitations for this year’s celebration went only to my parents and my aunt Jeanine. Maybe I’m not just going in circles. Maybe this is actually a downward spiral, like into a black hole.

My parents normally prefer something a little more sanitized than a radical feminist burrito bar, especially when it means driving all the way into Hollywood. And normally I’d prefer not to be spending my birthday with my parents. But I think they sensed that I had no other options, and found it in their hearts to make the effort, even if Dad defiantly ordered a garden burger at a Mexican joint.

Also, Aunt Jeanine loves this place. My parents think it’s because she’s secretly a lesbian. I’m more inclined to think it’s because: a) she knows a good burrito and a fun atmosphere, two things my parents couldn’t possibly
comprehend, and because b) regardless of her orientation, she knows that men are vermin.

Dessert arrives before my parents’ line of questioning can continue. Feminista has this crazy cake that you’re supposed to split called the
Orgasmo de Cacao
. Any other night, I’d share one, but anticipation about tomorrow and a series of texts I’ve been getting all evening caused me to order a whole one for myself. Mom and Jeanine are sharing one, and Dad got, for dessert—I kid you not—a side salad.

As we dig in, I read tweets on my phone from all the people over at the Hatch, the best all-ages club in Silver Lake. They’re seeing, and tweeking out over, a band called Postcards from Ariel. Tonight’s show is their North American tour kickoff. Thirty dates, coast to coast, celebrating the release of their new album,
Dispatch
. Postcards is from my high school. They graduated last year.

And they used to be mine.

I was planning to spend tonight at that show. Back when it was just the next show on the calendar. Back before Postcards got signed by Candy Shell Records, who subsequently rerecorded the album we’d been working on all spring, booked them a nationwide tour and, oh, fired their former management company, Orchid Productions, aka me.

One could argue, if one wasn’t busy eating a two-pound skillet of chocolate cake, that I was the reason Postcards got that record deal, the reason there was big interest in them even after only one EP last fall. Those
awesome rocket-ship mailbox T-shirts? Yours truly.

One could also argue that their lead singer, Ethan Myers, and I had something special.

Oh, seventeen-year-old Summer
, I tell myself yet again, over bite after bite of molten chocolate,
you were a sucker
. Which is maybe true, maybe not. True that I thought Ethan Myers was the real thing. I could have watched him strum that guitar and croon those sweet high melodies forever. It seemed so real. We met at the Spritz, a coffee shop back in Mount Hope, just after Postcards had played an acoustic set. I was a sophomore and so into music. He was a junior with a cool new band. I couldn’t believe he was actually into me.

I mean, I could believe it a little. I clean up nice, and when he asked me what I thought of the set, I said, “I like that fourth song you played. The one with the line about the tides inside us? That was a cool idea.”

Apparently, most people respond to Ethan Myers with phrases like,
Oh. My. God. It was uh. Mazing!
Or:
You guys
. . . [insert crying].

Apparently, it was completely novel for a girl to have a thought about a specific thing in a specific song, and to articulate that thought coherently.

“Oh, nice,” he replied, adding, “‘beneath the surface of the photograph.’” At the time I should have caught this finishing-his-own-lyric move as a sign that he was a self-gratifying nematode, except then he said, “thanks for noticing,” and it sounded sincere, and also he smiled, and
yowch, the way his eyes lit up was sort of amazing. Then he asked, “What about the other songs?”

Then, apparently my response, “Oh, they were fine, too,” came off as a little indifferent (even though at the time I was whirring inside)—and apparently, telling a musician their songs are “fine” is basically like telling them you think they suck.

And then finally, this level of indifference is apparently completely irresistible to men. Guys dig when women fall all over them, but what they really love is a chase.

We started dating. I sincerely loved the band. Their sound was one part folk, one part rock, but with a melancholy thing that occasionally turned dark. I helped out: spreading the word about their shows and videos, designing their website and BandSpace page. And it worked, so Ethan thought I should become their official manager. There was some Yoko danger there, and the other members were skeptical, but then I was good at it.

One rainy Sunday in January, Ethan and I printed up my first business cards for Orchid Productions at Expresso Mail. We drank medicis, like mochas with orange, a drink that Ethan had discovered while visiting Seattle, and we took a self-portrait, me with a bit of foam on my nose, the attendant frowning in the background because we insisted on drinking them with the tops off so we could enjoy the froth even though there was a big sign that said
NO BEVERAGES NEAR MACHINES
. It was my profile picture for over a year.

What I’m good at is spreading buzz, fanning flames, setting up great gigs. But most important, it turned out that I have an eye for what really sets a band apart. What their greatness truly is. Bands have a hard time seeing that from the inside. Lots of times, they care too much about sixteenth notes and egos, and which girls in the audience are checking them out.

After two years of work, Postcards was really taking off, but then along came Candy Shell Records, with a studio and a tour and a marketing team, and one more thing: a contract with a clause stating that the band could not have any
third-party
management.

Suddenly, so long, Summer. But that wasn’t even the worst part. Because only then did I learn that Ethan Myers was also not what I’d thought. Those pretty melodies and guitar chords he spun . . . it turned out I wasn’t the only heart he’d ensnared in his web.

“Nothing bonds two people as deeply as music,” Ethan said to me once. (I know: in hindsight, SO LAME!). And I was the fool who assumed he was only referring to the two of us, when actually, Ethan had felt that deepest of bonds quite a few times during our relationship: like with a blogger named Alice he met in San Diego while on a tour I set up but couldn’t go on; with freakin’ Missy Prescott at Todd Forester’s house party a few hours after I’d left; even the night they got signed, with a Candy Shell intern named Royce.

And the poetic wordsmith’s excuse for all this? “I couldn’t help it. They were so into me. It was hard, you know?”

I managed to fire that little zinger before the stupid tears and the storming out and everything else.

And then of course, after the breakup came the regret. I am still sorting out where on the scale of being played for a fool I fall. There’s the embarrassment, too. For two years, I’d hung out with Postcards all the time: at lunch, before and after school, sitting in the back row together at assemblies. They were my band of musician pirates. I felt like I’d finally found my tribe. I knew some people mistook me for a groupie, but I also believed they didn’t get it. Turns out they sorta got it.