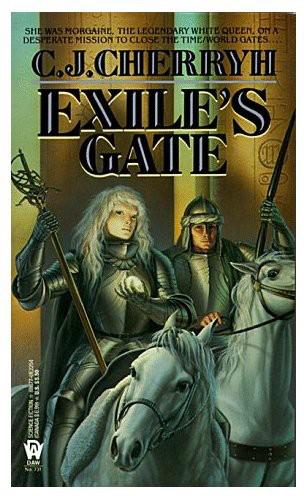 THE EXCITING SAGA OF MORGAINE BY THE INCOMPARABLE C.J. CHERRYH AVAILABLE FROM DAW BOOKS, INC.:

Morgaine's
adventures are also available in a continuing graphic series adapted
and illustrated by Jane Fancher, working closely with C.J. Cherryh. The
GATE of IVREL graphic series is available from:

The qhal found the first Gate on a dead world of their own sun.

Who
made it, or what befell those makers, the qhal of that age never
learned. Their interest was in the dazzling prospect it offered them, a
means to limitless power and freedom, a means to shortcut space and
leap from world to world and star to star
—
instantaneous
travel, once qhalur ships had crossed space at realtime, to carry to
each new site the technology of the Gates and establish the link. Gates
were built on every qhalur world, a web of eyeblink transport, binding
together a vast empire in space.

That was their undoing . . . for Gates led not alone
where
but
when,
both forward and backward along the course of worlds and suns.

The
qhal gained power beyond their wildest imaginings; they were freed of
time. They seeded worlds with gatherings from the far reaches of
Gate-spanned space . . . beasts, and plants, even qhal-like species.
They created beauty, and whimsy, and leaped ahead in time to see the
flowerings of civilizations they had planned
—
while their subjects lived real years and died in normal span, barred from the freedom of the Gates.

Realtime
for qhal became too tedious. The familiar present, the mundane and
ordinary, assumed the shape of a confinement no qhal had to bear . . .
the future promised infinite escape. Yet once a qhal made that first
forward journey, there could be no return. It was too dangerous, too
fraught with dire possibilities, to open up backtime. There was the
deadly risk of changing what Was. Only the future was accessible; and
qhal went.

Some
went further than certainty, pursuing the hope of Gates which might or
might not exist where they were predicted to be built. More lost their
courage completely and ceased to believe in further futures, lingering
until horror overwhelmed them, in a present crowded with living
ancestors in greater and greater numbers. Reality began to ripple with
unstable possibilities.

Perhaps
some desperate soul fled to backtime, seeking origins or a lost life or
a memory; or perhaps at last the very weight of extended time and
energies grew too much. Might-have-been and Was were confounded. Qhal
went mad, perceiving things no longer true, remembering what had never
been true in the worlds which now existed.

Time was ripping loose about them
—
from
ripplings to vast disturbances, the overstrained fabric of space and
time undone, convulsed, imploded, hurling all their reality asunder.

Then
all the qhalur worlds lay ruined. There remained only fragments of
their past glory . . . stones strangely immune to time in some places,
and in others suddenly and unnaturally victim to it . . . lands where
civilization rebuilt itself, and others where all life failed, and only
ruins remained.

The Gates themselves, which were outside all time and space . . . they endured.

A few qhal survived, remembering a past which had been/might have been true.

Last came humans, exploring that dark desert of worlds the qhal had touched . . . and found the Gates.

Men had
been there before . . . having been victims of the qhal and therefore
involved in the ruin; Men looked into the Gates, and feared what they
saw, the power and the desolation. A hundred went out those Gates, both
male and female, a mission with no return. There could only be forward
for them; they must seal the Gates from the far side of time, one and
the next and the next, destroying them, unweaving the deadly web the
qhal had woven . . . to the very Ultimate Gate or the end of time.

World
after world they sealed . . . but their numbers declined, and their
lives grew strange, stretched over millennia of realtime. Few of them
survived of the second and third generations, and some of those went
mad.

Then
they began to despair, for all their struggle seemed hopeless: one Gate
omitted anywhere across the web would begin it all again; one Gate,
anywhen misused, could bring down on them the ruin of all they had ever
done and make meaningless all their sacrifice.

In
their fear they created a weapon, indestructible save by the Gates
which powered it: a thing for their own protection, and containing all
the knowledge they had ever gained of the Gates
—
a doomsday force against that paradoxical Ultimate Gate, beyond which was no passage at all
—o
r a truth worse than all their nightmares.

They were five when that dreadful Weapon was made.

There was one who survived to carry it.

Vision of horses, one gray and shadow, one star-white, both shod for war . . . one dark rider, one pale, across void and night—

In gray lines, horses and
riders appear along the river-ridge, concealed in mist and the
uncertainties of dawn. Weapons bristle up, lower, all in one nightmare
movement of the charge. It is ambush, and below them, humans ride along
the sedge-rimmed river, Ichandren's men, their weapons laid across
saddlebows. Ichandren looks up aghast at the first thin shout, the
thunder that comes down on them in morning mist, the hedge of weapons
that materializes out of the fog. The promised truce is broken, the
valley has become a trap into which shadowy riders pour off either
slope.

"Back!" Ichandren yells, wheeling his horse about.

The hindmost of his men
shriek and die, pierced by lances, and the riderless horses splash
along the reed-edged banks. The mist is full of shadows, shadows of
enemies, of human riders fleeing in confusion, small bands battling in
isolation. Even sound is distorted, echo mingling with present orders,
screams and the clash of weapons ringing off the hills.

Some attempt retreat; but
other shadows come pouring out of the mist behind, and horns sound in
wild confusion. Ichandren shouts orders, but there is no relief, the
enemy is too numerous, and his voice is lost in the confusion.

In despair he rallies such
of his guard as he can, and turns and drives back the way he has come,
in a world of shades and ghosts.

Vision of horses, the gray
and the white, hooves descending, slowly, all of time and existence
suspended upon that single motion—

In the opal dawn, in the
mist, arrows fall like black sleet on flesh and steel, and thunder on
wooden shields, finding chinks in the failing defense. Hammer and
hammer again, blow after blow. Horses are down, threshing and
screaming, crushing the wounded and the dead. Men flee afoot, cut down
by the sweep of riders on the perimeters.

There is no more hope.
Ichandren has met ambush. The fox has been out-foxed, and the enemy
riders circle, cutting down those few who evade that last sweep.

But most rally around Ichandren, as horses go down, as men fall.

No arrows now. At the last
it is swords and a battle afoot, humans against humans, Ichandren's men
against those who have sold their souls to Morund.

"Bron!" Chei ep Kantory
cries, seeing his brother fall, his place suddenly vacant in the
defensive circle and Morund crests surging against it. He tries to gain
those few feet, in that desperate knot about Ichandren, to die
shielding his brother, for it is only a question of place now: weight
of numbers bows their slight defense and breaks their shield-ring.

But thunder breaks behind
him. Chei turns and lifts his sword, but there are two of them, helmed
and masked, who come thundering toward him across the brook, throwing a
fine spray in the first breaking of the sunlight.

Third stride, the gray horse and the white, stately slow, inexorable as fate—

The solemn procession
reaches the killing-ground, the place of execution. They have walked
this far, these last survivors of Gyllin-brook. Ichandren is not among
them. The fox's head stands on a pike outside Morund-gate, his
countenance strangely tranquil after so much he has suffered; and by
now the crows will have claimed the eyes, as the crows and the kites
have claimed so many, many others.

Carrion crows rise up here,
at this end of all roads, black shapes against a pale, sickly sun, dull
clap of startled wings that recalls the thunder of hooves on sand—

But that day is done,
Ichandren is dead, his men have seen him die, and seen the things done
to him, which made his death a mercy.

Now is their own turn. And
disturbed birds settle back to the field, one solitary raven pacing on
the roadside in the important way of his kind.

"Halt," lord Gault calls
out, Gault ep Mesyrun, but this is not the Gault Ichandren knew, the
brother in arms he once trusted. This is a different creature, who now
holds lordship over Morund Keep. Qhal serve him, though his hair is
human-dark and his body heavy and of no remarkable stature; the humans
in his command fear him greatly. That is the kind of man he has become.
And Gault has brought the prisoners here, to this place where crows
gather, where the woods grow strange and twisted. He has cause to know
this vicinity. In a place not far hence the woods grow strange indeed:
no beast will go there, and no bird will fly above the heart of it. By
that place Gault holds power over the south.

But they will go no further
than this, for this purpose, for the disposal of enemies, here on the
boundaries of law and reason. Horses shy and snort at the carrion smell
of the place. White bits of bone, scattered by animals, litter the dust
of the roadway, beside a bald hill—and on that hill stakes and frames
stand against the sky, some vacant, some holding scraps of flesh and
bone.

Blows and curses drive the
prisoners staggering toward their fate, blows more cruel than the
others they have suffered on this march, for even the guards fear this
place and are anxious to be away. The prisoners go, bewildered; they
climb most of the way up that hill before something, be it courage, be
it only the breaking of a fragment of skull under a man's foot, or the
regard of one black, beadlike raven eye lifting from its fixation on
carrion—breaks the spell, breaks the line, and a man attempts escape.
Then horses cut him off, two riders gather him up by the arms and haul
him screaming to the hilltop. Other riders, humans with staffs and
pikes, rain blows on the rebellion that follows, and drive the
remainder to the stakes.

"I shall not leave you
destitute," lord Gault follows them to say, riding his red roan horse
to the crest, bones breaking under its hooves. "I leave you food. And
an abundance of water. Can I do more?"

Chei ep Kantory is one who
hears him, but dimly, as a voice among other voices, for the
executioners have laid hands on him, as already they have taken Eranel,
ep Cnary, Desynd, and red-haired Falwyn who is Ichandren's youngest
cousin. He resists, does Chei, as he has been trouble on the march; but
repeated blows of a pikestaff bring him down, at the last without a
struggle, stunned and waiting only for whatever the enemy will do. The
carrion stench is everywhere, his groping hand feels the brittle shards
of bone among the silky dust on which he lies, the sky is a white,
burning fire and the shadows of devils move across it, press at his
body, drag at his booted ankle and clamp a grip about it which does not
relax when they let him go.