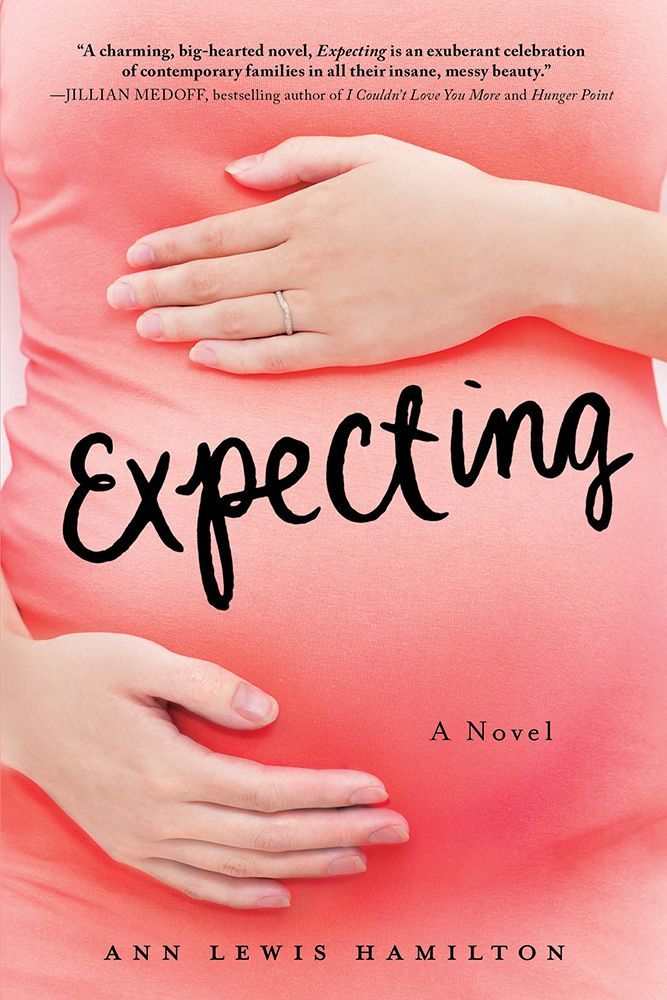 All brand names and product names used in this book are trademarks, registered trademarks, or trade names of their respective holders. Sourcebooks, Inc., is not associated with any product or vendor in this book.

A Conversation with the Author

For Max, my birth child

For Lucy, my heart child

The worst place your water could break.

The Hollywood Bowl. During an especially quiet part of a classical concert, not Darth Vader’s theme from the “Star Wars Suite.” You’re in a center box seat, close enough to see the sweat on the cello player’s forehead, and the space is crowded tight with four people, so an inconspicuous exit will be impossible. Your husband notices the concrete floor of the box is suddenly slick and wet and whispers, “Did you spill your wine?” And you’d like to believe him—it could be wine, but you know it’s amniotic fluid. Vintage, nine months.

There are several problems with this scenario, one of them being you’re not drinking wine these days. Pregnancy requires Martinelli’s Sparkling Cider, nothing alcoholic.

And two, it’s been weeks since your husband moved out of the house and into an apartment. So what would you be doing together at the Hollywood Bowl?

Another bad place for your water to break—a plane. Flying to the most remote spot on earth, over the ocean, four hours from any airport.

Or alone on a desert island. No doctors, no midwives. You always meant to watch the YouTube video that explains how “Anyone Can Deliver Their Own Baby.” Too late now.

At Grace’s house, sitting on her new Roche Bobois white leather sofa. “It cost more than a car,” she tells you. “The leather feels like butter.”

So the parking lot at the Trader Joe’s in Sherman Oaks isn’t the worst place; it’s not even top ten bad. Laurie is loading her bags in the trunk and thinking about how she caught the clerks winking at each other when they saw the crazy pregnant lady buying seven bags of dark-chocolate-covered pretzels. “The pretzels aren’t for me,” she told them. “I’m having a party. For my book club.”

Inside the car, she opens a pretzel bag—just to make sure they’re fresh—and feels something moist in her panties. Not a great rush of fluid, but the sensation is a shock all the same. The baby isn’t due for another week. At home, she goes to the bathroom, and when she looks in the toilet, the water is pink. She calls Dr. Liu and he tells her to head to the hospital.

Laurie’s mother is at home in Reno and still on crutches because of her broken knee. Calling will only make her worry.

Grace is in Napa, annoyed at Laurie because she hasn’t been asked to be the birth coach. Grace is a wonderful person, Laurie’s best friend, but her alarmist personality (“Do you know the
real
probability of an asteroid striking the earth?”) is not the support Laurie needs in a delivery room.

Alan isn’t answering his phone. She could leave a message. Or not.

Laurie walks down the hall to the guest room. The door is closed so she knocks. She can hear the creak of the bed and Jack appears. His hair is messed up and he rubs at his eyes.

Laurie considers. Maybe she should call Alan back and leave a message.

Instead she nods at Jack. “I think it’s time.”

On
The
Flintstones
, pregnant Wilma tells Fred, “I’m ready,” and Fred gets so excited he hops in the car and drives off with Barney instead. Wilma remains calm, not worrying about how they haven’t invented Pitocin or epidurals yet. She’s a
cavewoman
; she probably has to butcher her own T-Rex if Fred wants steak for dinner. And she knows, even though he’s Fred, he’ll remember eventually and come back for her.

At the hospital, Fred paces and waits with Barney. He’s not allowed in the delivery room with Wilma.

Who’s going to be in the delivery room with Laurie? She closes her eyes.

“Bring the notes for your final and I’ll quiz you between contractions,” Laurie tells Jack.

He frowns, his eyes wary. He’s changed his clothes, and he’s wearing a baseball cap—backward—to hide his bed hair.

Jack smiles,
oh
right
, as if he knew that’s what she meant all along, and Laurie considers saying the word
dilation
just to watch his face go pale. But that would be cruel and things are crazy enough already, and this isn’t the way it’s supposed to be and goddamn it, Alan is her
husband
; he should be here instead of Jack, her houseguest, although that’s probably not the best way to explain her relationship to Jack, which is only
insanely
complicated and where the hell
is
Alan anyway? Jack takes a step closer and says, very gently, “Do you have everything?” Jack is sometimes surprisingly wise and perceptive for a twenty-one-year-old.

Everything except my husband.
“I hope so,” Laurie says. She packed her birthing bag weeks ago and has only repacked it three times. She tries Alan’s cell again and leaves a message. “I’m on my way to the hospital.”

On the drive over the hill to Cedars-Sinai, she times the contractions. Every twenty minutes. Good; little chance of Jack having to pull over to the side of Coldwater Canyon so he can deliver the baby himself. The air-conditioning in Jack’s car is broken, so the vent above her knees blows out arctic air and Jack reaches in the backseat for a blanket. “Sorry,” he says, and she’s not sure if he’s sorry about the broken air conditioner or the fact the blanket is a tiger-stripe Snuggie, but it’s warm enough and keeps her knees from aching.

“Is there any music you want to hear?” Jack asks her.

Laurie plugs her iPod into Jack’s adaptor. Hits shuffle. Frank Sinatra begins to sing “I’ve Got the World on a String.”

Jack makes a face. “This is your labor mix?”

“What would you pick?”

Jack shrugs. “I don’t know. Something not as old-fashioned.”

“I guess. If you say so.” Jack doesn’t sound convinced.

Alan likes Frank Sinatra. Is that why she picked this song? She will try not to think about Alan.
Sing
to
me, Frank. About rainbows, about how life is a wonderful thing.

Jack’s hands clutch at the steering wheel. Is he dreading what’s about to happen?
None
of
us
signed
up
for
this, Jack.
She leans against the headrest. It makes a snapping sound and pops back a few inches.

“Sorry. I keep meaning to fix that,” Jack says.

The admissions nurse is young, not much older than Jack. Her nameplate says “Constance” and Laurie thinks that’s a good sign, a name you’d like to see when you arrive at the hospital in labor. Nothing as upsetting as “Cruella” or “Maleficent.” Why is Laurie thinking about cartoon characters? Is it some symptom of early labor? They didn’t mention that in Lamaze.

Constance is smiling at Jack. “Your first?”

Jack’s mouth opens, but he doesn’t say anything.

“I think it’s my first,” Jack says finally. “But there could be more. Lots more.”

Constance flips through Laurie’s file. “Super, you’ve already done your preregistration. You’d be surprised how many people put it off.” Another smile at Jack. “Do you know what you’re having?”

Constance laughs as if Jack’s onstage at the Comedy Store. Laurie clears her throat. Shouldn’t Constance be sending her off to a room?

“I know, thank you.” Laurie hopes Jack is fine, but why are his parents calling? The timing is terrible; he’s worried enough about his final and now she’s in labor—she shouldn’t have made him come with her. When he’s off the phone, she’ll send him back to the house, insist his final is the most important thing in his life right now. She’ll be okay on her own. Alan will get her message and show up.

Unless he doesn’t. The contractions are coming closer together now, and she realizes she’d like to lie down.

Jack walks over to Laurie; he turns his cap forward. Then back again.

“Not really. My parents are here.
Here
here. In L.A. On their way to the hospital.”

Laurie tries to take that in. “You told them?”

“My sister did. Blabbermouth.”

Laurie exhales. “Okay. So they know. But don’t worry about your parents. Or me. Think about your final. You need to study.”

“I can’t study
now
. I have to deal with this.” He points at Laurie’s stomach.

“This.” A tsunami-sized wave of guilt washes over Laurie. Her head feels fuzzy; the lights of the admissions desk are too bright. Like spotlights.

Constance leans over the desk, waving a form at Jack. “Mr. Gaines? I need your signature on this.”

Jack looks at Laurie, at Constance. “I’m not Mr. Gaines.”

The lights around Laurie multiply. She has to squint and her fuzzy head grows fuzzier.

“Will you call Alan?” she asks Jack. “Maybe he’ll pick up this time.” Why are the lights so hot? And why does Jack have two faces? With four eyes, two noses? Is this another sign? Will the baby be born like that? Everything is supposed to happen for a reason, that’s what people say. What people? Who would come up with a stupid saying like that?

“Laurie? You look kind of…” Two-headed Jack is moving toward her. And the admissions nurse, Cruella or Constance… Laurie can’t remember her name, but she has two heads as well—no,
three
heads, a hydra-headed nurse. That can’t be good. And she’s moving quickly from behind the desk and motioning at someone.

“Tell Alan we’ll name the baby Bamm-Bamm,” Laurie says to Jack before she passes out in his arms.

Spiritual Warfare by Prince, Joseph
The Queen's Devotion: The Story of Queen Mary II by Jean Plaidy
Leave Her to Hell by Flora, Fletcher
The Cache by Philip José Farmer
The Trash Haulers by Richard Herman
The Colonel's Daughter by Rose Tremain
Fire and Desire (BWWM Romance) by Watts, Rebecca K.
Stone Destiny (Stone Passion #3) by Warneke, A.C.
The Rake's Unveiling of Lady Belle by Raven McAllan
Running on Empty by Christy Reece