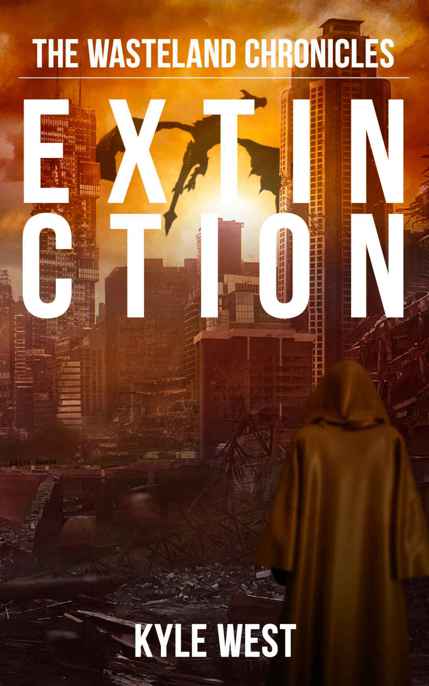 This is a work of fiction. Similarities to real people, places, or events are entirely coincidental.

M
akara, Samuel, Michael, and Julian had escaped the
Gilgamesh
crash site. At the same time, there were certain facts that couldn’t be ignored.

While they had escaped, they were still very much in danger.  They were in the Great Blight, far from water and help, and likely surrounded by Blighters. It would take days, if not weeks, for them to make it back to the Wasteland – assuming they didn’t die on the way. There was no way of knowing their destination, either.

One thing was certain, however – without a spaceship, the Exodus was stranded in Bunker 84 with only two weeks of food left. And unless Augustus rescued them, they would eventually starve.

I couldn’t see any solution other than what Augustus had proposed: to join forces with him. The Wanderer had said we needed to unite, but all the same, it was hard to imagine a world where the Empire, the Reapers, and the Angels worked together.

But, that was what had to happen if we were ever to beat the
Radaskim.

Makara, at least, wouldn’t stand for such an alliance, mostly because of the Reapers. Both she and Anna wanted Carin Black dead for his crimes. But what choice did we have? Askala was ready to wipe out humanity, and she wasn’t going to stop with the Wasteland.

Despite discovering my four friends were alive, we were still in the custody of Emperor Augustus. Anna, Ashton, and I had each been locked in separate cabins. If there was a future alliance in the works, as Augustus had said, it wasn’t off to a great start. The Emperor’s first item of business was probably going to Los Angeles to meet with Carin Black and the Reapers.

Augustus and Black held all the cards. I didn’t know what Carin Black was like. All I knew was that he had destroyed both Makara’s and Anna’s lives, not to mention Samuel’s, and countless others as well. Back in 2055, the powerful Reapers overthrew the weakening Lost Angels, killing their leader Raine, and forcing surviving members to flee into the Wasteland or face enslavement. Both Makara and Samuel had been forced to find new lives: Makara as a Raider, and Samuel as a scientist in Bunker 114. Anna’s settlement of Last Town had been assaulted by the Reapers earlier. When her father was killed in the fighting, she and her mother fled into the Wasteland, where they’d survived for years.

Whoever Carin Black was, he wasn’t someone I wanted to work with. I wasn’t even sure if he was even someone I wanted
alive,
and I definitely knew both Makara and Anna wanted him dead. Samuel had said little on the subject, but his feelings were probably much the same. At some point, Anna, Ashton, and I would have to meet the Warlord of the Reapers.

A change was coming. I didn’t know what it was, but I felt it. It wasn’t just with the Great Blight and Askala. It was with humanity.

Augustus had rescued us, but whose side was he
really
on? He talked of alliance and friendship, but it was difficult to believe him. Maybe he
did
want everyone working together. As Emperor of Nova Roma, he was probably used to getting people who didn’t like each other on the same page.

I had a hard time figuring out the guy. In the end, though, Augustus was probably on his own side. His hope was probably to get both the Reapers and the Angels working for him. Assuming we defeated Askala, Augustus could take control of the Wasteland.

I had nothing but questions, questions that couldn’t be answered until I was let out of my cabin. For now, Augustus thought victory was as simple as attacking the Voice and defeating it in open battle. We hadn’t been able to tell him everything else we’d learned, including my own role.

The only way to defeat Askala was infecting her with the
Elekai
version of the xenovirus, which was something only I could do.

According to the Wanderer, it would cost me my life. He had also said that we must unite. Maybe it was best to follow his advice, regardless of what anyone thought about it. Allying the Reapers, the Empire, and the Angels would be the most difficult thing we’d done.

And none of us had any idea how to do it.

Makara opened her eyes. “Hear what?”

The Recon sat alone in a mountain valley coated with xenofungus, sheltered within a stand of xenotrees. The trees’ spindly limbs fell in a silvery cascade, obscuring the Recon from view. The fungus itself glowed in the night, milky and pink. Frail alien trees spiraled from the xenofungal bed, their hanging limbs and tufts and fronds spilling like silk onto the ground. Tall pink tubes rose from the fungus, their bell openings dripping slime that collected in sticky, shining pools. Alien chirps, clicks, and shrieks sounded from distant hills.

“Is there something out there?” Samuel asked.

“What do you think it was, Julian?” Makara asked.

“Hard to believe,” Julian said, “but it
sounded
like a spaceship.”

Outside, the xenolife chirped on.

“No, it couldn’t have been that,” Michael said, now awake. “You saw
Aeneas
fall.”

Julian paused. “Maybe it was nothing. I was just sleeping, and thought I heard it. I must have dreamt it.”

Satisfied at this answer, everyone closed their eyes once again. Bunker 84 was far, but Samuel had estimated that the group could get there in a few more days. For some reason, Julian doubted that assessment.

They’d be lucky to get there at all. Three days after Samuel’s estimate, and they had crossed over into Nevada. They had expected to find desert, but instead found
more
Blight. It had expanded farther than any of them would have thought.

Julian closed his eyes. Even though he was exhausted, he couldn’t fall asleep. It was Samuel’s turn to be on watch, as Julian had done it last night, which meant sleep should have been coming easy. But he couldn’t stop thinking about the others. Alex, Anna, Ashton – all dead, crashed into the mountainside. They had driven by the wreckage of
Aeneas
first thing, before
Gilgamesh
itself had become a burning ruin.
Aeneas’s
hull was so disintegrated that it was impossible to explore the ship on foot, much less check for empty escape pods.

They had searched a full day throughout the valley, but it became clear that they couldn’t search forever. It was far too cold and dangerous to go into the mountains out of the Blighted valley. Besides, a pod could have landed anywhere, and the Recon had very little in the way of emergency supplies – supplies they couldn’t stretch on a fruitless search. Already, they were rationing, eating half as much as they should.

In the end, Samuel had made the final decision. They were to return to Bunker 84 and try to save everyone there without spaceships. Assuming they actually
made
it to the Bunker, this would involve a journey south over mountains in the dead of winter. Assuming anyone made it, Samuel planned to offer the New Angels’ services to Augustus and Carin Black. Not a satisfying ending, but the only ending, nonetheless.

During their journey southwest, the Great Blight had been surprisingly empty of threats. Makara guessed that Askala was gathering her swarm in one place, for one final attack...which had emptied much of the Great Blight. Perhaps they hadn’t run into any crawlers, but that didn’t mean they wouldn’t at some point.

If, against all odds, they reached Bunker 84, then what? The New Angels would only freeze and starve in the mountains on the perilous journey south. Many would rather stay in the Bunker, even if there wasn’t enough food to go around. By the time they reached Los Angeles on foot, the New Angels’ dead would probably outnumber the living. Their numbers would be too few to have leverage with Augustus or Black.

Maybe the number of Angels would be as few as zero.

Maybe
that
was why Julian had heard the spaceship. If not wishful thinking, then maybe it was wishful hearing. But Julian couldn’t shake the thought. What if it
was
a spaceship? There were two left –
Perseus
and
Orion,
both locked away in Bunker Six. There was no way anyone besides the New Angels could access it. Bunker Six was not too far north of Bunker One, and was even deeper in the Great Blight, making it more inaccessible than the former headquarters of the United States government. There was no way either of those ships could be flying around. There was no one on Earth that could pilot them besides Makara, Ashton, and Anna.

Again, Julian’s thoughts turned back to Alex. If he was really dead, they had to find another solution. That meant talking to the Wanderer. But how, without having the speed of a spaceship?

No one had explicitly said that all hope was gone in the two days since the crash. Samuel had merely ordered everyone to head back to Bunker 84. Julian was sure, however, that he wasn’t the only one being haunted by these thoughts.

The only solution that Julian could see was for the Wanderer to select a new person to fill Alex’s role. But maybe that wasn’t possible. After all, hadn’t the Wanderer prophesied that Alex was the only one who could defeat the
Radaskim?

In the passenger seat, Samuel adjusted his legs.

Makara stirred as the door opened, but didn’t wake. Michael opened a single eye, then fell right back asleep.

Julian opened his own door, stepping onto the padded xenofungal surface of the Great Blight. The air was warm and moist – both water and heat rose from the organic growth below. A gentle wind blew, warm. It seemed strange that the Great Blight, the most dangerous place in the world, had the mildest weather.

A few steps ahead, Samuel swept hanging tree limbs out of the way, revealing an incline of a few feet, ending at a high precipice. Blighted plains stretched below. At the end of the plains, about three miles distant, rose glowing, jagged mountains. They reminded Julian of teeth; the broken, rotting teeth, of a broken, rotting world.

Samuel went to stand at the edge of the cliff, and Julian stood a short distance to the side. Above, the skies had somewhat cleared, a rare occurrence in the Great Blight. A small window to the heavens had opened, a black void filled with a swath of bright, shining stars. A purplish band of light streaked across the small opening in the clouds.

“The Milky Way,” Julian said, stepping up beside Samuel. “We’d see it at night, in New America. Here, not so much. Too cloudy.”

Samuel gazed upward, saying nothing. Julian scanned the valley below. According to the Recon’s navigation, there should have been a highway down there, running east and west. There was no sign of it, now. First, buried by years of dust. Next, buried by the xenoviral incursion. Likely, it was buried forever, just as all the Old World would one day be.

“Even if we make it in time,” Julian said, “will it make any difference?”

Staring out at the alien landscape, Samuel took time before he answered, as if weighing the unexpressed feelings behind the question itself.

“You never know. You should never give up hope as long as you’re breathing. You never know if salvation is beyond the next rise.”

Julian was about to respond, but found he had no words.

They stood another moment before Julian spoke again.