Read Eye for an Eye Online

Eye for an Eye 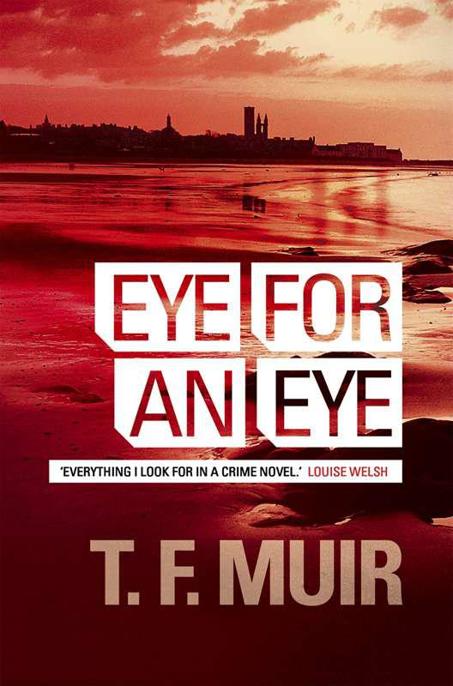 Born in Glasgow and now a dual UK/US citizen, T. F. Muir is currently working on his next Andy Gilchrist novel, another story suffused with dark alleyways, cobbled streets and all things gruesome.

‘Everything I look for in a crime novel’ Louise Welsh.

Rebus did it for Edinburgh. Laidlaw did it for Glasgow. Gilchrist might just be the bloke to put St Andrews on the crime fiction map’
Daily Record.

Eye for an Eye

First published in the UK by Constable, an imprint of Constable & Robinson Ltd, 2012

The right of T. F. Muir to be identified as the author of this work has been asserted by him in accordance with the Copyright, Designs and Patents Act 1988

Rain hangs from the sky in silver ropes that dance on the street and spill from choked gutters. Lightning flashes. His face flickers white. Thunder cracks, a close clap that shakes the windowpane by his head. The centre of the storm is near now, no more than a mile or so to the north, somewhere over the Eden Estuary.

I watch him turn toward me, his eyes small and tight as a pig’s. With a drunken grimace he hitches up his trousers, their short legs concertinaed and blackened by the downpour. He moves from the doorway, tries to face me, stumbles against the wall. He rights himself. ‘Are you looking for something?’ His words are tired and heavy.

His eyes struggle to focus, and I tighten my grip on the wooden stave tucked behind my right arm. A tremor shivers my legs, for although I’ve thought about this moment often, I’ve never killed anyone before.

I step toward him.

As if to show he has nothing to fear, he tries a laugh, but coughs instead. Despite the rain streaming down his face, spittle forms at the corners of his mouth.

The skies flash. The air cracks.

We stand still, shocked by the closeness of the hit.

Then his eyes narrow.

The whittled point of my stave pierces his left eye with a sound like wet mud popping. His body stiffens, topples away from me, thumps to the ground.

His left eye fills black with rain that spills down his cheek like ink. I tighten my grip on the stave and drive it deep to the back of his brain, then give a hard twist.

His legs kick. Then still.

I stand, turn away, keep my eyes to the ground.

I head toward Louden’s Close then onto Lade Braes Lane, a narrow path hemmed by high stone dykes. I keep my head low and walk with a brisk step. Rivulets of rainwater accompany me down the pathway, like lifeblood flowing from his filthy corpse.

I reach Queen’s Terrace, no more than ten quick minutes from home. The downpour will obliterate all trace of my passing. And even if by the slimmest of chances someone finds a muddied footprint somewhere, no one will trace the oversized boots to me. I smile.

Tonight I have started my journey to hell.

Andy Gilchrist stirred awake. Something was ringing at the edge of his mind.

He squinted at the Hitachi clock radio on his bedside table and in the winter morning darkness read 5:38.

Something slapped over in his gut as his wakening mind told him why it would ring at that time of the morning. Had he slept through another storm?

He grabbed his mobile. ‘Gilchrist.’

‘Where is it this time?’

‘Shit.’ CCTV monitoring of the town was still in its infancy and no cameras were installed near the harbour. The chances of anyone being down there at night were slim to non-existent, but with a rush of hope he asked anyway. ‘Any witnesses?’

‘Damn it.’ That would be a first. ‘I suppose no one from the Division was anywhere near there?’

‘We’re stretched thin as it is, boss.’

Gilchrist cursed again. He had been on at Patterson for the best part of two months, pleading for additional staff.

And now the Stabber’s tally had reached six.

He clicked on his bedside lamp, screwed his eyes against the burst of brightness and scanned his dresser for his cigarettes before remembering he had given up.

‘Do we have the victim’s name?’ he growled.

‘Tommy Carlisle told us who it is, but we’ve not had it confirmed yet.’

‘You know Tommy. Owns
The Bitter Alice
. Always first at the harbour. Says he was on his way to load his creels when he almost tripped over the body. One eye staring at the moon. The other, well, the usual. Says it’s Bill Granton, the manager of the Bank of Scotland in Market Street.’

‘What time was this?’

‘Being taken as we speak, boss.’

‘Granton, was he married?’

Gilchrist drew the back of his hand across his stubble. In years past he’d been responsible for informing next of kin, one of those necessary evils of the job, which no one liked. DS Nancy Wilson would handle it well.

‘Granton’s wife,’ he said. ‘Did she report him missing?’

‘Nothing logged, but we’re looking into it. By the way, rumour has it Granton was gay.’

Gilchrist frowned. To date, the Stabber’s victims were all men known to be abusive to women.

‘You sure about that?’ he asked.

‘Not one hundred per cent, boss.’

‘Get onto that, Stan,’ he ordered, then added, ‘No chance of this being a copycat, is there?’

‘Have you seen the body?’

‘At my feet, boss. Bamboo stave in the left eye. But the pathologist would need to confirm that the brain’s been stirred.’

‘The press don’t know about that. Let’s keep it that way.’

‘Has the harbour been sealed off?’

‘As we found it. But the seagulls are making one hell of a racket.’

Gilchrist had seen only one body with its eye sockets pecked clean by birds. Fifteen years on, he was still unable to rid himself of the memory. He squeezed the back of his neck, forced his thoughts to focus.

‘And that’s when Granton was attacked?’

Gilchrist had crashed out, a combination of too many beers and exhaustion from thirty hours’ sleep a week for the last two months. ‘Have you spoken to Sa?’ he asked.

‘Have her meet me at the harbour as soon as.’

Gilchrist disconnected and stood up. He lolled his head to the left, then back and around to the right. Steady as a rock. Good.

In the bathroom he turned on the shower and stared at the mirror. Bags under his eyes. Grey stubble. Forty-five going on sixty. Where the hell had it gone? Twenty-seven years with Fife Constabulary. Should he not be looking forward to retirement instead of dreading the day DCI Patterson would kick him out? And that day was not far off. Of that, he had no doubt. Ever since Patterson had suspicions of his affair with Alyson Baird, Gilchrist had known his days were numbered.

He picked up his toothbrush and peeled back his lips. At least he still had white teeth, despite having smoked. His only redeeming feature, he often thought. He dropped his silk shorts and stepped into the shower, turned his face into the stream and lathered Badedas soap against his chest. Eyes closed, his fingers searched for the electric razor he purchased last year on a trip to the States. Battery operated and waterproof. Shaving in the shower was now one of life’s small pleasures.

Ten minutes later, Gilchrist braced himself against the cold wind of an east coast November morning. Dawn was still a good hour away and the skies hung low with the threat of more rain. He walked up Rose Wynd to Castle Street, where his Mercedes SLK Roadster was parked, and pressed the remote. Lights flashed in the darkness. He opened the door and slid inside. With a twist of the key, the Merc’s 2.3-litre engine fired up first time.

He slipped into drive and accelerated onto High Street. Out of Crail, he put his foot down. St Andrews sat ten miles north on the A917 and he would reach the harbour in fifteen minutes. Maybe ten. He noted the time on the dash. Just after six. Sa might already be there.

He picked up his mobile and pressed memo 7. His call was answered on the first ring.

He almost smiled. ‘Becoming psychic in your old age?’

‘Been awake for hours.’

‘How about you? Hung over?’

‘Whatever gave you that idea?’

My God. Was that how many he’d had? ‘I left just after you,’ he said. ‘Which reminds me. Why didn’t you stay?’

‘What’s with the twenty questions?’

‘Just taking an interest in your well-being.’

Gilchrist waited for Sa to continue but she was a woman of few words, a loner with a chip on her shoulder. He had not found a way to reach her yet, even though they had been working on the case together since the Stabber’s fourth victim was found with his head staked to the ground two months earlier.

‘When can you make it to the harbour?’ he grumbled.

‘Just be there,’ he said, and disconnected.

He gritted his teeth. Sa was
his
assistant. Not the other way about. She was thorough and hardworking, but he needed to feel some mutual trust, feel confident that they worked as a team. But Sa sometimes treated him with a coldness that could be mistaken for contempt. He blamed Patterson for teaming them up. Patterson had known Sa was difficult to work with and it was his perverted way of saying,
Try screwing the ass off of that one
.