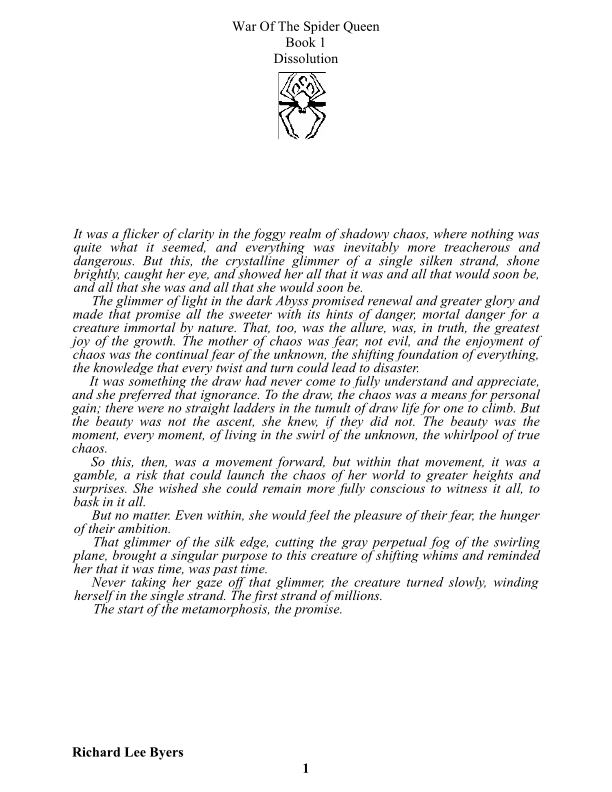 ,  mortal danger for a creature  immortal by nature. That, too, was the allure, was, in truth, the greatest joy of the grchaos was the continual fear of the unknown, the shifting foundation of everything, owth. The mother of chaos  was fear, not evil, and the enjoyment of the knowledge that every twist and turn could lead to disaster. and she prIt was something the draw had never eferr            come to fully understand and appreciate, ed that ignorance. To  the  drawgain; ther                , the chaos was a means for personal e werthe beauty was not the ascent, she kne no straight ladders in the tumult of draw life for one to climb. But ewmoment, every moment, of living in the swir, if they did not. The beauty was the chaos.                  l of the unknown, the whirlpool of true

So this, then, was a movement forward,  but within that movement, it was a gamble, a risk that could launch the csurprises. She wished she could r   haos of her world to greater heights and emain more  fully conscious to witness it all, to bask in it all.

But no matter.  Even within, she would feel  the pleasure  of their fearof their ambition.                        , the hunger plane, brThat glimmer of the silk edge, cutting ought a singular purpose to this crthe gray perpetual fog of the swirling eature  of shifting whims and reminded her that it was time, was past time.

Never taking her gaze off that glimmer,  the creatureherself in the single strand. The first strand of millions.    turned slowly, winding

The start of the metamorphosis, the promise.

Gromph Baenre, Archmage of Menzoberranzan, flicked a long, obsidian-skinned finger.  His office door, a black marble rectangle incised all over with lines of tiny runes, swung noiselessly shut and locked its self.At least certain that no one could see him

,  the drow wizard rose from  the white bone desk, faced the back wall,  and swirled his hands in a complex pattern. A second doorway opened in the stippled calcite surface.

His dark elf vision unimblackness beyond the new exit. There was no paired by the lack of light, Gromph stepped into the and for a m                 floor there to receive his tread, oment he fell, then he invoked the power of levitation granted by the floating up a featureless shaft. The cool aiHouse Baenre insignia brooch that he  was never without. He began to rise, as it always did, and it also carried a   r tingled and prickled against his skin the creatures native to this peculiar psrank, unpleasant smeudoplane of existence had been nosing ell. Evidently one of around the conduit.

,  pungent enough to make his scarGrom                  let eyes water and sting his nose. shape in the darkness. ph looked up. At first he saw nothing,  but then he discerned a vague ovoid The Archmage wondered how the beast had had before. Had it torn a hole in the  wall, oozed through like a ghost, or done gotten inside the shaft. Nothing ever something stranger still? Perhaps—

It plummeted at him,  putting an end to his speculations. Gromhe preferred to conserve their power foph could have effortlessly blasted the creature with one of his wands, but dismissed the force of levitation lifting his body and allowed himr genuine threats. Instead, he coolly self to drop back down the shaft. The fall would keep him  away fromcast a spell, and he didn'              the beast for long enough to t there was no ground.    have to worry about hitting the ground. In this reality, The bejeweled and sigil-adorned Robes of the Archmage flapping around him,  he snatched a vial of venom  from  his pocket,  set it alight with a spurt of flame fromhis fingertip, and recited an incantation. On  the final syllable, he thrust his arm  at the creature, and a glob of black, burning liquid erupted from  his fingertips.

Propelled by maagainst the descending predatorgic, the blazing fluid hurtled straight up the shaft to splash . The creature emitted a piercing buzz that was likely a cry of pain. It floundered in the  airwalls as it fell. Its body sizzled and bubbled , as the spattered acid ate into it, but it bouncing back and forth against the resumed diving in a controlled manner.

Manipulating an empty cocoon, he  cast another spell. The beast's body crumpled and folded into itself, and for a heartbeat, it was a helplessly tumbling mouse—then it swelled and rippled back into its natural form.

All right, thought Gromph, then I'll cut you up. accelerated. He prepared to conjure a hail of blades, but at that moment, the creature

Gromand he wasn'ph had no idea the creature could descend any faster than it had hitherto, t  prepared for the sudden burst of speed. The

creature closed the distance between them  in an instant, until it was hovering right in his face.

It had the melted or unfinished look common to mablank little eyes and a writhing proboscis  sat off center in its bumny such beings. Rows of only vaguely differentiated from  its rubbery blob of a body. The mp of a head, onster possessed no wings, but it was flying—the goddess only knew howwere the m                          . Its legs ost articulate part of it. Ten thin, segmented members terminated in barbed hooks, which lashed at GromAs he expected, the frenzied scratching faph again and again and again.iled to harm  him

.  The enchantments woven into Gromph's piwafwi—not to mention a ring and an amulet—armored him  at least as well as a suit of plate.  Still, it irked him  that he had allowed the beast to get so close, and he felt more  irritated still when he noticed that the creature's exertions were flinging tiny smonto his person.            oking droplets of his own conjured acid He growled a final spell and snatched  hold of the malodorous predator, seizing handfuls of the blubber on its torso. Instantly the maand vitality flowed into him           gic began its work. Strength