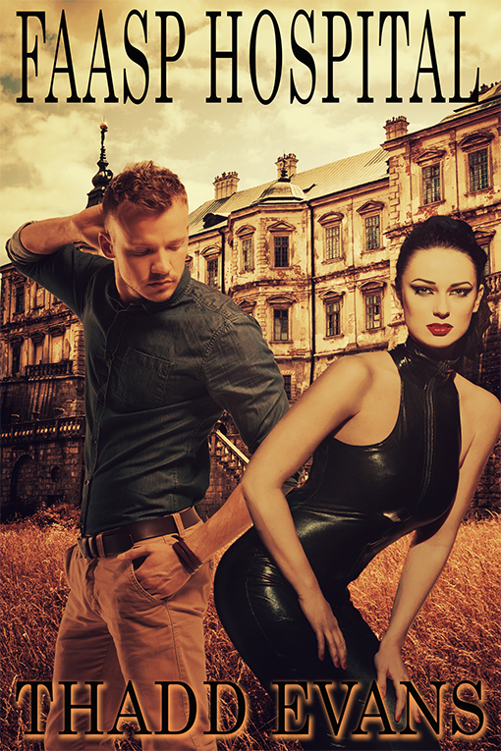 In the near future, a software engineer, a new employee who works in a hospital, struggles to find time for romance.

Will his potential girlfriend lose interest because he spends too much time at work?

The unauthorized reproduction or distribution of this copyrighted work is illegal. Criminal copyright infringement, including infringement without monetary gain, is investigated by the FBI and is punishable by up to 5 years in federal prison and a fine of $250,000.

Please purchase only authorized electronic editions, and do not participate in or encourage the electronic piracy of copyrighted materials. Your support of the author’s rights is appreciated.

All rights reserved. Except for use in any review, the reproduction or utilization of this work in whole or in part in any form by any electronic, mechanical or other means, now known or hereafter invented, is forbidden without the written permission of the publisher.

In the afternoon of the year 2035, I entered Joseph’s office. Minutes ago, this CEO of Optev, a software company in San Francisco that created medical equipment for eye doctors, called. After a brief conversation, he told me to come here.

I sat down, teeth clenched, scared. Joseph only spoke to me to deliver bad news.

“I don’t know how to say this, but there’s no more work.” He handed me a check. “When the need arises, we’ll call you.”

I took it, grinning, being professional, then stood and left, my body cold, a shocked reaction.

My temporary job as a computer programmer had ended.

Months later, on a winter day, after selling my used car to pay rent, I walked away, thoughts racing, upset, knowing unemployment insurance wasn’t enough to meet next month’s expenses. My undergraduate and graduate degrees in Biology along with a Bachelor’s degree in Computer Science looked impressive, but my work history, only a few months, was a problem. In fierce competition, about twenty seekers for each job, only the best were hired.

In late April, on a Wednesday evening, an email from Donald Flen, the CEO of Ahantech, a two-year old company in San Francisco that was similar to Optev appeared. He wanted me to come to his office for a job interview, but the response didn’t mention anything else.

According to an internet search, he, a forty year old with undergraduate and Master’s degrees in Biochemistry along with a Bachelors’ in Computer Science, had worked for Visse, a corporation that used nanobots to improve and restore eyesight. Because he spent nine years with this cutting edge organization before starting Ahantech, odds were high that this new company, Ahantech would succeed.

I gawked at the information, stunned by his impressive background.

Near the end of the week, I entered Donald’s office, my ninth job interview and sat down, blinking.

A slender man with pink skin and thick glasses frowned. “Thanks for coming in.”

He glowered. “Why do you want this job?”

My adrenaline pumped faster. “It’s a great way to help people. And I love the challenge of creating great apps.”

He scowled. “Where do you see yourself in five years?”

I grinned, feeling paranoid. “Here.” Was this short answer the best? More details might help. However, a stupid, half-baked comment would make him angry.

He glanced at a piece of paper, a blank expression on his face. “If we’re interested, someone will call you back.”

“Okay.” Was my cliché the best response? I couldn’t think of anything else.

In the waiting room, two men and a woman, all about my age, dressed in designer suits, glanced at me.

I smiled, being courteous, and headed for the door, chills running down my spine, terrified that Donald would hire one of them, not me.

A woman, a stranger with an icy tone, asked if I was available for an interview tomorrow morning with Donald.

I sat, grinning, astounded. My mind went into high gear, preparing for a tough question.

Donald offered a thin smile, one that look forced. “I like your resume.”

He frowned. “There’s a ninety day probation period. During that time, use and improve Medxao, our software, to help Ophthalmologists and eye surgeons. Are you interested?”

“Tomorrow at eleven, start work at Dr. Haar’s office.” Donald told me where it was.

I beamed, excited, yet terrified and left the room. My cell phone rang. I answered.

Donald announced, “There has been a change of plans. Tomorrow, at nine, help medical assistants in ophthalmology.” He gave me a name and room number. “When that is finished, go to Dr. Haar’s office.”

According to text, the result of a smart phone search, Dr. John Haar received his medical degree from Obin University. In the last five years, using 3D printers along with induced pluripotent stem cells, his team had manufactured eyes that surgeons used to restore many blind patients’ vision.

I blinked, awed by their successes.

I knocked on the doctor’s office door.

A middle-aged white man with a huge forehead opened it, a concerned expression on his face.

I introduced myself. We shook hands.

A frail older woman with sunglasses, who was being escorted by a male orderly, walked up to him.

His face lit up.

According to my studies, Ophthalmology had improved dramatically. After a successful operation, many blind people started learning how to see, a complex process that took place in the brain and optic nerve. In many cases, those who were born with this disability struggled more than accident victims because the act of organizing shadows, light, shapes, and moving objects took a lot of time, effort, and patience.

“By the way, this morning, a colleague told me you repaired three databases, did an excellent job.”

“Word is getting around.”

I thanked him for the compliment.

We entered a room and stopped next to a bed.

In it, a twenty something woman with bandages over her eyes, cheeks, and arms, groaned.

I cringed, shocked by this repulsive sight.

“My face and arms hurt, but it isn’t as bad as yesterday.”

“Progress. Glad to hear it.”

He introduced her to me.

I offered a forced smile, my shoulders tensed, trying to adjust to her appearance.

Dr. Haar blinked. “Are you all right?”

Her chin jerked. “The pain will go away soon. Thanks for asking.”

Dr. Haar nodded, his brow contorted. He glanced to the right. “Someone brought you roses.”

“Yeah, my mom did that this morning.”

The doctor and I left.

He whispered, “A firefighter rescued her moments before flames destroyed the room she was in.”

“If the operations succeed, there won’t be much scar tissue left, and her new eyes will function normally.”

“Impressive. When are you going to put them in?”

“A week from today.”

“What about Tammy’s arms?”

He scowled. “At this point, my guess is we’ll have to replace them with prostheses. Tomorrow, I’ll know for sure.”

I winced, shocked that doctors would have to amputate.

I nodded and walked away, taking the hint.

Later in the day, he called and told me to go see Dr. Sanchez tomorrow morning.

According to my screen, the result of a web search, Dr. Martin Sanchez, an eye surgeon who used induced pluripotent stem cells and nanobots in most of his operations, received a medical degree from Sygma University. The idea of working with this professional intrigued and scared me.

The next morning, I entered an IT room, part of ophthalmology, and sat next to him, facing a wall of screens. On them, nanobots with pinchers placed an eyeball into a man’s empty socket, a hideous sight.

I leaned back, trying to calm my nerves.

Dr. Sanchez glowered. “We need to place about five thousand videos on a secured website. That way, doctors in Faasp, Nwa Medical Center, and other hospitals can use them to learn more.”

“There is a huge problem. In many cases, audio portions of lectures and surgical procedures become garbled. Doctors need to hear everything their colleagues are saying. Your team must repair this.”

“Good. I’m not sure if it’s the networks, Medxao, or both, but we need to do this ASAP.”

I hurried out of the room, texting Ahantech staff, Ray Smith and Wenda Fong.

Ray, a coworker with undergraduate and graduate degrees in Biomedical science, received his Masters in Computer Science from Delgi University. He worked for Sai Inc. for three years before Donald hired him. On every job project, he used Javla and Opop, object programming languages, to create and repair databases, 3-D images, video, and text. Because my boss brought him aboard several days after creating this company, Ray would know what our limitations were.

Wenda, a woman with an undergraduate degree in Biology along with a Bachelors and Masters in Computer Science from Tolwa College, an Ahantech employee who worked at Optse Corporation for two years, knew a lot about Tana and Opop. She joined this firm a week after Ray did

Much to my surprise, an attractive brunette from medical records, Val, handed me a slip of paper with a phone number on it. “If you would like to go out, call me.”

I smiled. My phone rang. I told her the call was important and walked off.

Wenda blurted, “Shit, this is a tough job. Ray agrees with me. I’ll call you soon, after both of us finish the project we’re working on.”

I said that was fine.

Hours later, after buying a cot, sleeping bag, portable closet, then putting them in my office, I sat at my desk. As my mind sped up, arranging priorities, I gulped down a takeout burger, and inspected on screen code. Pages scrolled. I shifted in my chair, frightened that this project would take a long time to finish. My phone rang.

I flinched. “How about Monday?”

Saturday morning, after laboring around the clock in my office for most of the week, sleeping a few hours every night on the cot, I returned to my apartment, and dialed Val.

I paused, surprised by her self-assured tone. “How about coffee at Tenor’s.”

“I’m looking forward to it.”

Inside this coffee shop, Val, pretty because she had put on makeup, called out my name.

I stared at her gorgeous figure, one accentuated by tight jeans, a form fitting blouse, and high heels, amazed that she would go out with me, a new employee.

We sat, coffee in hand.

She leaned forward, revealing more cleavage while the intoxicating smell of her perfume grew stronger. “I’m bossy and hard to get along with. I never date a man unless he makes one hundred dollars or more an hour.”

I choked on my drink, shook up by her abrupt manner. “Really.”

She applied gloss to her sensuous lips. “Yes. I don’t play games or waste time. It’s best to be upfront.”

“What kind of music do you like?” Listening to her answer would give me enough time to collect my thoughts. What was the best way to end this horrible date?

“The Mentos or Barbara Tell.”

I didn’t care for either of them. “Do you like photography?”

She leaned back, sunlight illuminating her beautiful turquoise eyes. “No.”

I cringed. “Sorry, but I don’t think we have much in common.”

She glared at me. “All right. If you change your mind, call me.”

I nodded, rose, and walked away, glad Val hadn’t lectured me, saying any man who rejected her was a fool. Although looking at her made my heart pound with excitement, there was nothing to talk about.