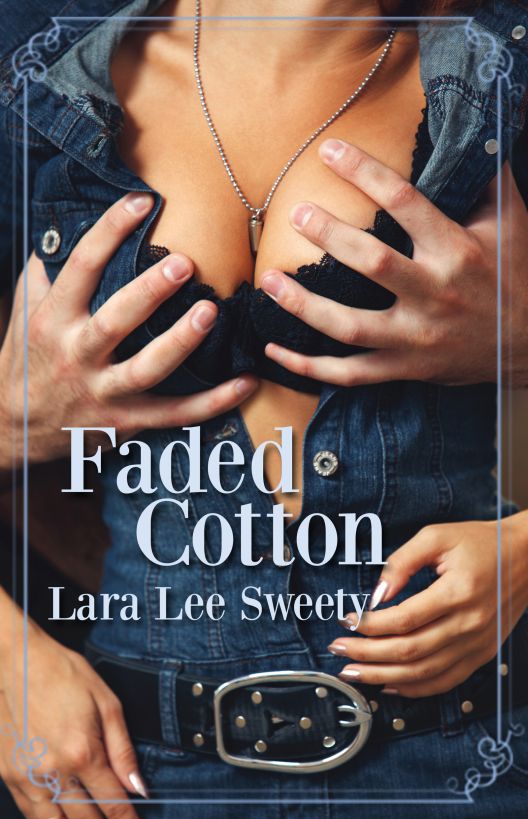 No part of this publication may be reproduced in
whole or in part, or stored in a retrieval system or transmitted by
any means, electronic, mechanical, photocopied, recorded, or
otherwise, without written permission of the publisher.

For information regarding permission, write to:

Faded Cotton is a work of fiction. Names, characters,
places, and incidents either are the product of the authors’
imagination or are used fictitiously. Any resemblance to actual
persons, living or deceased, events, or locals is entirely
coincidental.

The most wonderful lover a woman could ask
for.

Life is too damn short. My wish is that all
women would learn the secrets of pleasing a man and being pleased
early in life. Keeping your relationships vibrant and ever changing
takes a little luck, a lot of creativity, an open mind, and the
love of a good man.

This is for everyone missing someone tonight,
whether in service to their country, their state, or city, or town.
This is for all you ladies missing a hard-working man that is
pulling overtime, or who is out on the road, or working the late
shift.

Thank you to the man who makes me happy and
puts up with my wild, creative side. Thank you to all who
encouraged me to put this story to pen. Thanks to my editor, who is
a dear, sweet, smart young woman and my cohort in crime. Thanks to
the special people in my life, who make my life worth living, you
know who you are.

I wrote Faded Cotton for a lot of reasons,
mostly, because it made me happy. I hope you enjoy the journey of
Laurel MacClain and her extended family as much as I do.

P.S. For the best strawberry margarita mix
ever, flip to the last page of the book for Grandma Maralee’s
Margarita recipe.

She was in the same booth she always sat in
at City Creek Bar & Grill. Looking out across the grounds to
the lake, she realized she was a mixed bag of emotions that day.
Laurel MacClain was a little lonely, a little happy, and a little
scared. The brakes going out on her truck and a barn fire, all in
one week, were too much. Seeing G, so soon again, would be a rare
treat that would make her happy.

Rarely did one of the guys come to see her so
soon after leaving the farm. Each had his own life, each had moved
on at the right time and she had wanted it that way. Each one was a
successful, driven man with purpose and confidence. Thinking of
them made her smile.

Sometimes she got post cards from far-away
places or emails with pictures or a “how ya doin’ ” text. Still,
there was no one to fill the “lonely” after the death of her
husband, Jahn. He had been the love of her life. Thoughts of him
engulfed her, intensifying the ache.

Her gaze was held by the soft rippling water,
but there was nothing soothing about it. The growing pit at the
bottom of her stomach gnawed at her harder. The brakes, the fire,
she was scared—an emotion she didn’t often embrace. After years of
running a 1200-acre farm on her own, she didn’t have time for
fear.

Her senses pulled her back temporarily to her
surroundings. Staff had been hurrying to set up a reception room
for a party. Plates clattered to the floor somewhere in the back.
She watched the bartender cleaning and straightening. Beyond the
bar, she could see the tile in the café area being mopped. The
entire place was meticulously kept. She looked back through the
window to the bridge over the narrow section of the lake. It was a
favorite of lovers and photographers. The restaurant was one of
Laurel’s most satisfying investments.

Laurel’s thoughts were adrift until someone
plopped down in the booth directly behind her. She turned her
attention back to the drink in front of her and savored the bubbly,
fake-sweet soda she was so badly addicted too. She wondered what
had kept her sister, Addy, from making it to their regular business
meeting.

Her lunch date was Gary Hoffson or “G” as he
was known to his friends. She wasn’t sure how he’d managed the
nickname, but it suited him. His grandmother had raised him. She
was a sweet, fiery, lovely woman with Hispanic roots; he had
inherited her spirit. He was average build, fit, 5’11”, with dark
hair, a swarthy, tanned glow and dark brown eyes. Laurel had always
thought of him as movie star material. She’d seen him work his
bluff and bull shit on people, including her. He was so believable,
no matter what came out of his mouth—and
so damn good
looking
. He had worked at the farm while he finished college
and the police academy. Later he came back to stay, working a big
case that involved a local.

The young detective slid in across from her
so quickly it startled her.

“Why Detective Hoffson, how nice of you to
join me!” It was uncharacteristic of G to be so abrupt. He had
always been the consummate gentleman, with polite, charismatic
hellos.

She looked up from her drink to focus on him.
Her sarcastic smirk disappeared.

“Shit, Gary, what’s wrong?” Detective Hoffson
was having the worst day of his young career and it showed on his
face.

“Laurel...you are going to be arrested.” He
hadn’t planned on any of what was about to happen.

“Keep it down Laurel!” He hissed, scowling at
her.

Hoffson looked as if he’d run a marathon. He
was red-faced and nearly dripping with sweat.

“The brakes, the fire, they aren’t
coincidental. Roll with what is going to happen next. This is for
your own protection. All I know is that you’ll get out of this.
Whatever this mess is, it’s big and involves a lot more people.” He
was stern; his tone cut the words out with precision. She knew he
was serious.

“Gary, you are scaring the shit out of me!
What do you mean,
arrested?
What for?” Gary swallowed hard
seeing the terrified look on her face.

“Just trust me. Don’t say anything. You’ll be
out of the station quickly.”

“For God’s sake, G! What the hell?” Laurel
was shaking. Gary Hoffson looked sideways out of the corner of his
eye and lowered his voice even more. Leaning forward, he gritted
his last few private words to her through his teeth, “Keep quiet
Laurel, please whatever you do.”

That was going to be hard to do, she thought,
feeling panicked, as she watched a bead of sweat drip from his
face. She would have never dreamed
she
was being
investigated. It made no sense.

“Gary, please I...,” but the last few words
were lost when she heard the distinct click of pistol chambers
being filled. The form that had sat down behind her swiveled up out
of the seat, grasped her wrist, and cuffed her.

“Laurel MacClain, you’re under arrest....”
The Miranda Rights recited by Detective Bradley Johnson were
covered by a loud, long list of expletives from Laurel. She
strained toward the arresting officer trying to get him to meet her
eye to eye.

“Are you serious—are you fucking serious?”
She was yelling at him. She searched for an answer, her head
switched from Hoffson to Johnson and back again. Gary Hoffson’s jaw
twitched as he watched the handcuffs snap in front of her, binding
her arms together uncomfortably. Laurel hadn’t seen Bradley Johnson
in a few years before he introduced her to Gary Hoffson. She knew
that he and Gary worked together as detectives. Knowing him didn’t
make her any less scared.

Johnson and Hoffson moved to either side to
escort her out. The two uniformed officers that had appeared out of
nowhere, guns drawn, covered the two detectives from flanking
positions, hands now on holstered weapons. Laurel was furious. The
two detectives acknowledged it, exchanging worried glances as they
took her out of City Creek.

“If this is a joke, boys, I’m not having
fun,” Laurel snapped sternly. What had she done that required guns
drawn on her?

“Mrs. MacClain, please come quietly,” Johnson
said, trying to keep the official facade up. His face was
expressionless, but his eyes pleaded her forward.

“No one should
come
quietly!” She
smarted off as her saucy side took over. It showed up when she was
scared or mad. She snapped her head toward Hoffson. “You bastard,
how could you lie to me like that?”

“Watch your tongue, Laurel. It’s part of the
job.” Hoffson snapped off. He was running out of patience.

“Yeah, I know what you would like to see me
do with my tongue, you conniving little prick!”

“SHUT UP!” The directive came in unison from
both Hoffson and Johnson as they ducked her head into the back of
the waiting, unmarked sedan. Laurel could be hard to handle.

“Uh, what do you need from us?” The taller of
the two beat officers inquired.

Not looking to be on the bad side of one of
the city’s most up-and-coming detectives, they looked at each other
with raised brows, shrugged and strode off to their cruiser.

“Hope we didn’t just step in a pile of shit,”
the driver said to his partner and sped off.

“Good grief, Laurel, you’ve never learned to
shut up have you?” Johnson said as he slid into the driver’s seat.
His words stung her. Yes, she spoke her mind regardless, but why he
was he so aggravated with her, she didn’t understand.

“Will somebody
please
tell me what in
the hell is going on?” Laurel pleaded, her eyes now flickering from
anger to fear. The car jerked as they hit a pothole.

“Gary, I trusted you. I was nothing but
loving and kind to you.” Gary Hoffson looked positively sick.
Johnson swallowed hard. They both hated seeing her in distress.

“Hey, I know this is weird. It’s time for you
to trust us for once, instead of you running the show. Clam up.
You’ll get answers soon, I promise.”

A speaker cracked static as the police
dispatcher came on and communication ensued. “69 do you copy? Do
you have the suspect in custody?” The confident female voice
interrupted.

“Confirmed, and the subject is 5150.” Johnson
fired back, smirking. He and Hoffson joined the dispatcher in
hearty laughter. The dispatcher’s voice smiled over the speaker,
becoming decidedly more personal.

“Hey Johnson, Hoffson needs an escort. Tell
him his wife is headed for Mercy General.” Gary caught it loud and
clear.

“Shit, how far apart are the contractions?”
Gary Hoffson was now looking a little freaked out.

Before dispatch remembered to cut out,
laughter could be heard in the background mixed with mock calls of
distress. “Nice.” Gary Hoffson winced. Arresting a woman he was
very fond of and having his wife go into labor all in one day was a
little hard on a guy.

Bradley Johnson grinned at his partner, “I
don’t know how I’ll explain this one, but I’m running you to Mercy
first. I’ll take care of Laurel. The hospital is on the way.”
Winding their way from the restaurant, which was on the outskirts
of the city, to the hospital, to downtown St. Louis would take some
time, but there was no way Bradley was going to let his partner and
friend miss the birth of his first-born.

“In labor, well congratulations, Gary. So
when did you get a wife? Before or after?” Laurel spat, happy for
him and mad at him at the same time. Hoffson hung his head and
wiped the sweat off his brow. “After.”

“I trusted you and you were doing exactly
what?” Flustered, she was trying not to be reduced to tears
again.