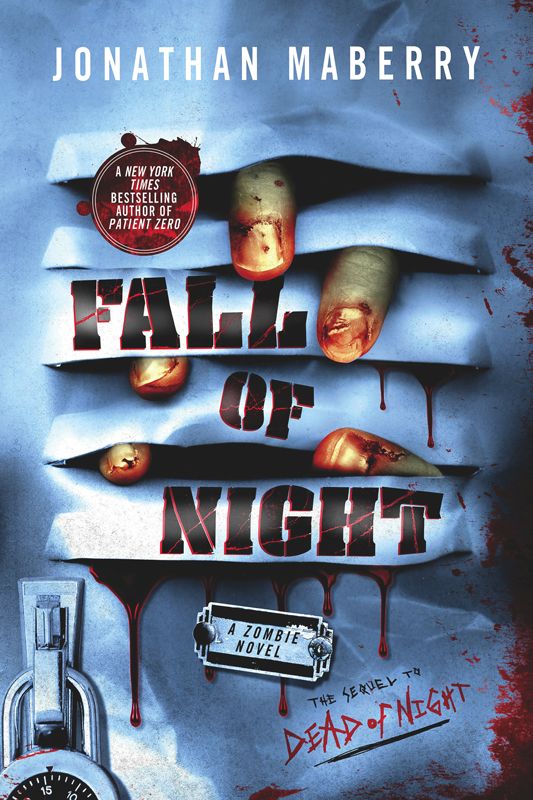 THIS ONE IS FOR SAM WEST-MENSCH.

AND, AS ALWAYS, FOR SARA JO.

A number of good people provided invaluable information, advice, and assistance during the research and writing of this novel. In no particular order they are: Michael Sicilia, public affairs manager with the California Homeland Security Exercise and Evaluation Program; Detective Joe McKinney, San Antonio PD; parasitologist Carl Zimmer; ethnobotanist Dr. Wade Davis; comparative physiologist Mike Harris; Dr. John Cmar, instructor of medicine at The Johns Hopkins University School of Medicine and an infectious disease specialist at Sinai Hospital of Baltimore, Maryland; the guys at First Night Productions—Louis Ozawa Changchien, Heath Cullens, and Paul Grellong; Dr. Richard Tardell, specialist in emergency medicine; comedians Jeremy Essig and Tom Segura; and screenwriter/director Eric Red. Special thanks to George Romero for inventing the genre and to John Skipp and Craig Spector for ensuring that “zombie literature” would endure. Thanks, as always, to my literary agents, Sara Crowe and Harvey Klinger; my film agent, Jon Cassir of CAA; my editor, Michael Homler, and all the good folks at St. Martin’s Griffin; and my social media guru, Don Lafferty.

But I’ve a rendezvous with Death
At midnight in some flaming town.

—Alan Seeger, “I Have a Rendezvous with Death”

“
This is Billy Trout, reporting live from the apocalypse
…”

The car sat in the middle of the road with the radio playing at full blast.

All four doors were open.

The windows were cracked and there was one small red handprint on the glass.

The voice on the radio was saying that this was the end of the world.

There was no one in the car, no one in the streets. No one in any of the houses or stores. There wasn’t a single living soul there to hear the reporter’s message.

It didn’t matter, though.

Stebbins County police officer JT Hammond pushed on the crash-bar and the door opened. There were bodies outside in the school parking lot. Scores of them, crumpled and broken.

JT looked around for movement and saw none. “It’s clear.”

He stepped outside and held the door as the line of infected people shambled out.

Billy Trout and JT’s partner, Desdemona Fox, came last, each of them holding a small child in their arms.

The National Guardsmen popped several flares on the far side of the parking lot to attract the masses of living dead. On that side of the lot, behind the chain-link fence, all of the Guard trucks sent up a continuous wail with their sirens. The dead shuffled that way, drawn by light and noise.

One of the victims, a man who had been bitten by what had been his own wife and children, stared glassily at the stiffly moving bodies. Then he raised a weak arm and pointed to the soldiers.

“Are they coming to help us?” he asked.

“They’re coming,” said Dez, hating herself for the implied lie. She told the wounded to sit down by the wall. Some of them immediately fell asleep; others stared with empty eyes at the glowing flares high in the sky.

For a moment it left Dez, JT, and Trout as the only ones standing, each of them holding a dying child. The tableau was horrific and surreal. They stared at each other, frozen into this moment because the next was too horrible to contemplate. Then they saw movement.

“The Guard?” asked Dez, a last flicker of hope in her eyes.

They heard the moans. For whatever reason, pulled by some other aspect of their hunger, a few of the dead had not followed the flares and the sirens, and now they staggered toward the living standing by the open door. More of them rounded the corner of the building. Perhaps drawn by a more powerful force.

The smell of fresh meat.

“And right now,” agreed JT. He kissed the little boy on the cheek and set him down on the ground between two sleeping infected. Trout sighed brokenly and did the same. Dez Fox clung to the little girl in her arms.

“There’s more of them,” said Trout.

But Dez turned away as if protecting the little girl she held from him. “Please, Hoss…?”

It took everything Dez had left to allow JT to take the sleeping girl from her arms. She shook her head, hating him, hating the world, hating everything.

“Better get inside,” JT warned. Some of the zombies were very close now. Twenty paces.

Trout ran to the door. “Dez, JT, come on. We have to go. We can’t leave this open or they’ll get inside.”

Dez reluctantly moved toward the door, backing away from the child she had to abandon. Trout reached and took her hand, and when she returned his squeeze it was crushingly painful. He pulled her toward the door as the first of the dead stepped into the pale glow thrown by the emergency light.

The big cop did not move. He held the little girl so gently, stroking her hair and murmuring to her.

They waited for him to come, but he stayed where he was.

JT kissed the little girl’s forehead and set her down with the others. Then he straightened and showed her his wrist. It was crisscrossed with glass cuts from the helicopter attack.

He pushed his sleeve up.

That was when she saw it. A semicircular line of bruised punctures.

Dez whimpered something. A question. “How?”

“Upstairs, when those bastards tackled us. One of them got me … I didn’t see which one. Doesn’t matter. What’s done is done.”

Then the full realization hit Dez.
“NO!”

It was all Trout could do to hold her back. She struggled wildly and even punched him. The blow rocked him, but he did not let go. He would never let go. Never.

The dead were closing in on JT. He unslung the shotgun. Across the parking lot the last flares were fading and the trucks turned off their sirens, one by one.

“No goddamn way, Hoss,” she growled, fighting with Trout, hitting him, hurting him. “We stand together and we fucking well go down together.”

“Not this time,” JT said, and he was smiling.

Trout could see it even if Dez could not, that JT was at peace with this.

“I’m going to keep these bastards away from those kids as long as I can,” said JT. “I need you to go inside. I need you to tell the National Guard to do what they have to do, but make sure they do it right. They got to wipe ’em all out. All of them.”

What he meant was as clear as it was horrible.

He shook his head. “I won’t ever leave you, kid. Not in any way that matters. Now … go on. There are eight hundred people inside the school, Dez. There are children inside that building who need you. You can’t leave them.”

And there it was.

Dez sagged against Trout and he pulled her inside and held her tight as the door swung shut with a clang.

They heard the first blasts of the shotgun. Trout didn’t hear the next one because Dez was screaming.

JT stood with his back to the line of bite victims, holding the shotgun by its double pistol grips, firing, pumping, firing. There was almost no need to aim. There were so many and they were so close. He emptied the gun and used it as a club to kill as many as he could before his arms began to ache. Then he dropped the gun and pulled his Glock. He had one full magazine left.

He debated using the bullets on the wounded, but then he heard the whine of the helicopters’ rotors change, intensify, draw closer; and he knew what would happen next. He just had to keep the monsters away from the children until then. Soon … soon it would all be over, and it would happen fast.

He took the gun in both hands and fired.

Inside the school building, huddled together on the floor, Desdemona Fox and Billy Trout held each other as bullets hammered like cold rain on the walls. It seemed to go on forever. Pain and noise and death seemed to be the only things that mattered anymore.

Plaster dust drifted down on them as the roar of the helicopters’ rotors dwindled to faintness and then was gone.

“It’s over,” Trout whispered. He stroked Dez’s hair and kissed her head and wept with her. “I won’t ever leave you, Dez. Never.”

Dez slowly raised her head. Her face was dirty and streaked with tears, and her eyes were filled with grief and hurt. She raised trembling fingers to his face. She touched his cheeks, his ear, his mouth.

Dez wrapped her arms around Trout with crushing force. He allowed it, gathering her even closer. They clung to one another and sobbed hard enough to shatter the whole ugly world.

The gunship hung in the air like a monstrous insect. Except for the heavy beat of the rotors there was no sound, inside or out. Sergeant Hap Rollins, the door-gunner, crouched behind the M134 minigun, mouth acrid with the gun smoke he’d swallowed, his ears ringing with remembered thunder. Thousands of shell casings rolled around his feet, eddying like a brass tide as the Black Hawk and its crew waited.

Rollins removed his hands from the minigun’s handles but his skin and bones still quivered from the vibrations of firing four thousand rounds per minute in a steady flow down into the parking lot. He reached up to his face and with clumsy fingers pushed his goggles up onto his forehead. His eyes burned from the smoke, but as he blinked he could feel wetness on his lashes. It wasn’t sweat and he knew it. Rollins wiped at his eyes with the backs of his trembling hands.

Below was a scene conjured in hell itself.

The parking lot of the elementary school was littered with the dead.

A few of them whole, most of them destroyed, torn apart by the relentless plunging fire from Rollins’s Black Hawk and the other gunships.

But what drew Rollins’s eyes and pulled tears from them was the figure that lay twisted into a scarecrow sprawl by the back door. It was a tall black man. Or it had been. A man dressed in the uniform of a police officer.

Sapphire Blue (The Ruby Red Trilogy) by Gier, Kerstin
(1941) Up at the Villa by W Somerset Maugham
The Curious Rogue by Joan Vincent
If Dying Was All by Ron Goulart
The Deadwalk by Bedwell-Grime, Stephanie
Jonah and the Last Great Dragon by M.E. Holley
Aneka Jansen 6: The Lowest Depths of Shame by Niall Teasdale
Brothers and Sisters by Wood, Charlotte
Sarah’s Billionaire Doms by Angelique Voisen
Zealot: The Life and Times of Jesus of Nazareth by Reza Aslan